July 30 2012
52
If the name Chernobyl is familiar today to almost everyone, and after the disaster at the nuclear power plant, it has become a household name that has thundered all over the world, few have heard about the Chernobyl facility-2. At the same time, this town was located in close proximity to the Chernobyl nuclear power plant, but it was impossible to find it on a topographic map. Exploring the maps of that period, you will most likely find the designation of a boarding house for children or the dotted lines of forest roads in the place where this small town was located. In the USSR, they knew how to keep and hide secrets, especially if they were military men.

Only with the collapse of the USSR and the accident at the Chernobyl nuclear power plant about the existence of a small town (military garrison) in the Polissya forests, which was engaged in "space espionage", at least some information appeared. In 1970-s, Soviet scientists developed unique radar systems that made it possible to track the launches of ballistic missiles from the territory of a potential enemy (submarines and military bases). The developed radar belonged to over-the-horizon radar stations (ZRGLS). Possessing huge sizes of receiving antennas and masts, ZGRLS required a large human resource. At the facility, combat duty was carried around 1000 military. For the military, as well as their families, a whole small town was built, having one street, which was called Kurchatov.

The Chernobyl exclusion zone guides, who are used to be called “stalkers,” like to tell one bike of a 25-year-old. After the USSR recognized the fact of accidents at the Chernobyl NPP, a stream of journalists from around the world rushed into the exclusion zone. Among the first Western journalists to come here, who were allowed to the crash site, was the legendary American Phil Donahue. Driving near the village of Kopachi, he from the window of the car noticed objects of impressive size, which considerably rose above the forest and caused quite justified curiosity on his part. To his question: “what is this?”, The security officers accompanying the group only silently looked at each other until one of them came up with a suitable answer. According to legend, he explained that this is an unfinished hotel. Donahue naturally did not believe this, but he could not check his suspicions in any way, he was denied categorical access to this object. 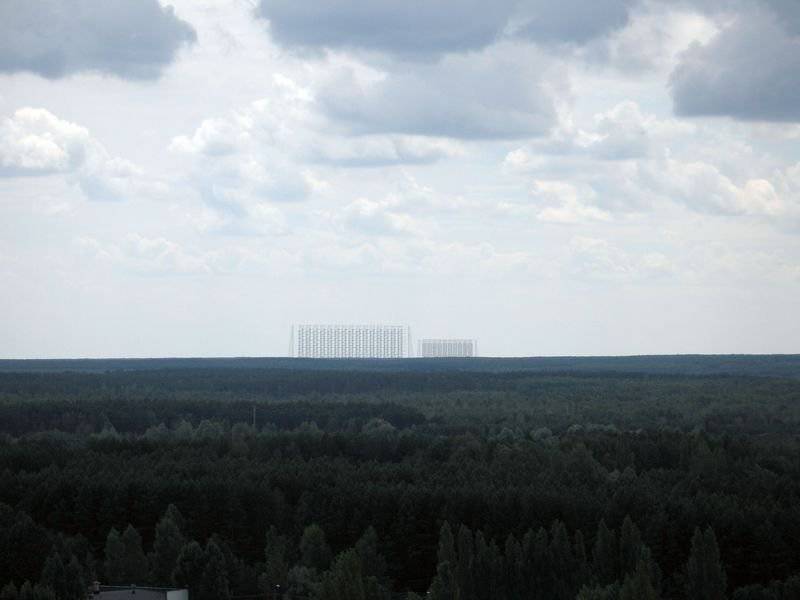 There is nothing strange in this, since the “unfinished hotel” was a kind of pride in the Soviet defense industry and automatically one of the most secret objects. It was the Doug-1 over-the-horizon radar station, also known as the “Chernobyl-2” object or just the Doug. “Duga” (5Н32) is a Soviet ZGRLS operating in the interests of an early detection system for launches of intercontinental ballistic missiles (ICBMs). The main task of this station was the early detection of launches of ICBMs, not only in Europe, but also “beyond the horizon” in the United States. In those years, none of the world's stations had such technological capabilities.

To date, only the American HAARP (high-frequency active auroral research program) has the technology that would be most similar to that used on the Soviet ZGRLS. According to official information, this project aims to study auroras. In this case, according to unofficial information, this station, located in Alaska, is a secret American weapons, through which Washington can control a variety of climatic phenomena on the planet. On the Internet, various speculations on this topic have not ceased for a year already. It is worth noting that similar "conspiracy theories" surrounded the domestic station "Douga". At the same time, the first station of the HAARP line was commissioned only in 1997, while in the USSR the first object of this type appeared in Komsomolsk-on-Amur as early as 1975.

While the residents of Chernobyl, as they thought, worked with a peaceful atom, the inhabitants of their city-namesake, more than 1000 people, were engaged, in fact, space espionage on a planetary scale. One of the main arguments for locating the low-temperature radar station in the Chernobyl woodlands was the presence of a number of Chernobyl nuclear power plants. The Soviet superlocator supposedly consumed up to 10 megawatts of electricity. The general designer of ZGRLS was NIIDAR - Research Institute for Long-Distance Radio Communication. The chief designer was engineer Franz Kuzminsky. The cost of the construction of this super-power radar in different sources indicates different, but it is known that the construction of the Dugi-1 cost the USSR 2 times more expensive than commissioning the 4-x Chernobyl power units. 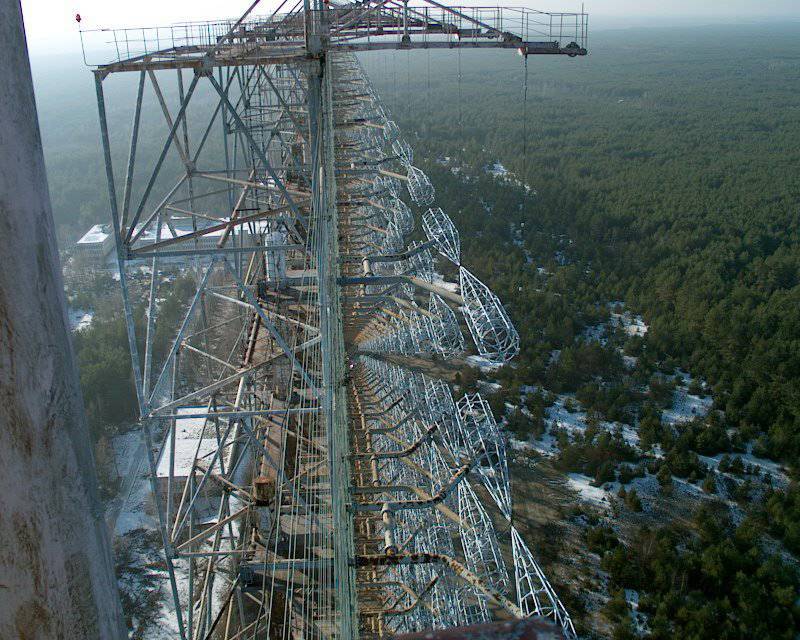 It is important to note that the ZGRLS, located in Chernobyl-2, was intended only for receiving the signal. The transmitting center was located in the immediate vicinity of the village of Rassudov near the city of Lyubech in the Chernihiv region at a distance of 60 km. from Chernobyl-2. The transmitting signal antennas were also made on the principle of a phased antenna array and were lower and smaller, their height was up to 85 meters. Today this radar is destroyed.

The small town of Chernobyl-2 quickly grew in the neighborhood with the top-secret construction project completed in record time. Its population, as already mentioned, was at least 1000 inhabitants. All of them worked at the UHFEL station, which, in addition to the equipment, included 2-e giant antennas - high-frequency and low-frequency. Judging by the available images from space, the length of the high-frequency antenna was 230 meters, and the height - 100 meters. The low-frequency antenna was an even more impressive structure, its length was 460 meters, and its height was almost 150 meters. This truly unique engineering miracle in the world (today the antennas were only partially dismantled) was able to cover almost the entire planet with its signal and instantly detect a massive launch of ballistic missiles from any continent.

True, it is worth noting that almost immediately after the commissioning of this station, which happened on May 31, 1982, some problems and inconsistencies were noted. Firstly, this radar could only capture a large concentration of targets. This could happen only in the case of a massive nuclear strike. At the same time, the complex could not track the launch of single targets. Secondly, many of the frequency ranges on which the ZGRLS operated coincided with civil aviation and civil fishing fleet USSR and European states. Representatives from various countries soon began to complain about interference with the operation of their radio equipment systems. At the beginning of the operation of the ZGRLS station on air almost around the world, characteristic knocks began to sound, which were drowned out by high-frequency transmitters, and sometimes even telephone calls. 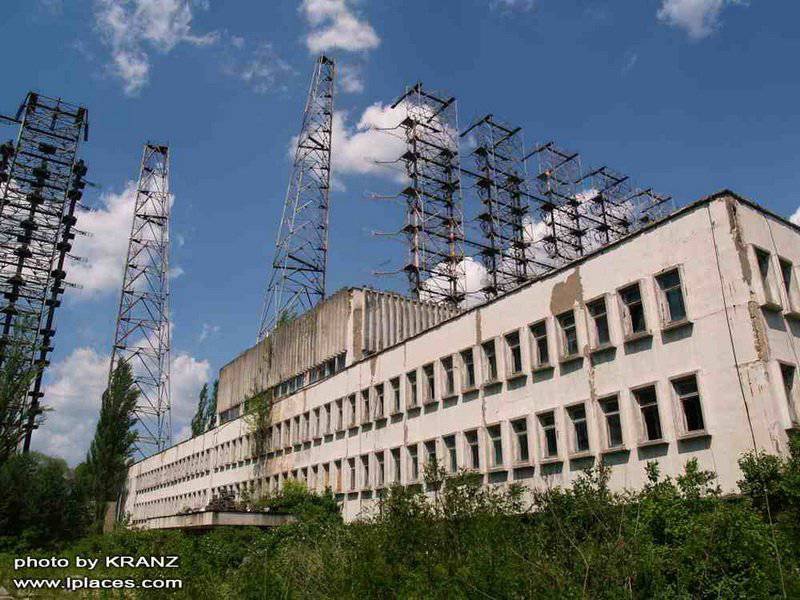 Despite the fact that “Chernobyl-2” was a top-secret facility, in Europe, they quickly got into the causes of interference, nicknamed the Soviet station “Russian woodpecker” for the characteristic sounds on the air and made claims to the Soviet government. The USSR received a number of official statements from Western states, in which it was noted that the systems created in the Soviet Union had a significant effect on the safety of maritime navigation and aviation. In response, the USSR made concessions on its part and ceased to apply operating frequencies. At the same time, the designers were given the task, they were instructed to eliminate the identified shortcomings of the radar station. The designers, together with scientists, were able to accomplish the task, and after performing the modernization of the UHFR in 1985, they began to undergo a state acceptance procedure, which was interrupted by the accident at the Chernobyl NPP.

After the accident, which occurred at Chernobyl 26 on April 1986, the station was removed from combat duty, and its equipment was mothballed. The civilian and military population was evacuated from the site as a matter of urgency from the zone that was exposed to radiation. When the military and the leadership of the USSR were able to assess all the scales of the environmental disaster that had occurred and the fact that the Chernobyl-2 object could no longer be launched, it was decided to export valuable systems and equipment to Komsomolsk-on-Amur, this happened at 1987 year 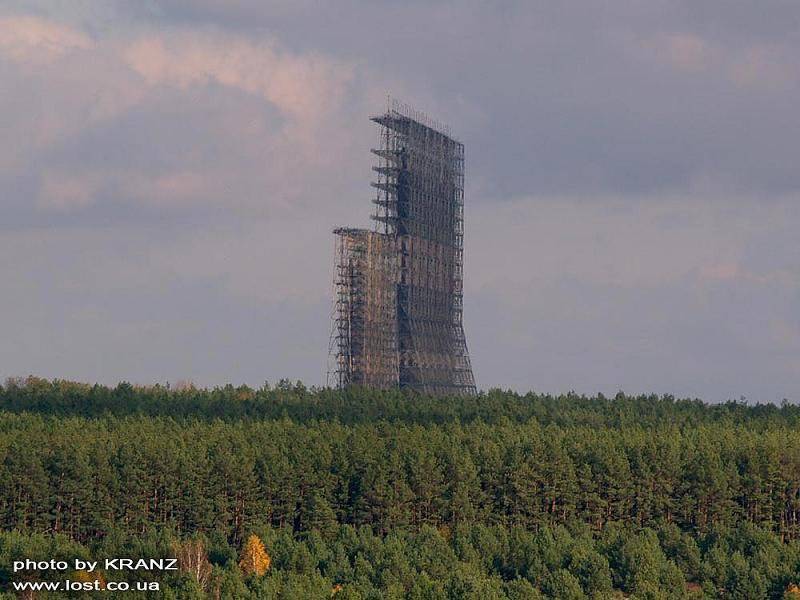 Thus, the unique object of the Soviet defense complex, which was part of the space shield of the Soviet state, ceased to function. The city and the city infrastructure were forgotten and abandoned. At present, only the huge antennas remind of the former power of the superpower at this abandoned object, which have not lost their stability to this day, attracting the attention of rare tourists in these places. Possessing simply colossal dimensions, the antennas of this station are visible from virtually anywhere in the Chernobyl Exclusion Zone.