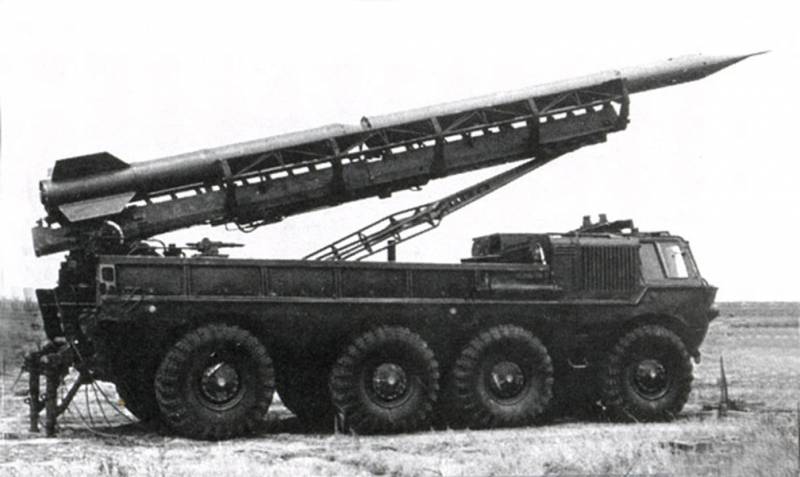 ZIL-135 with a tactical missile "Luna" is preparing for launch. Source: denisovets.ru

Better without a differential

In the first part of the material It was a question of search models ZIS-E134, based on which the concept of the future four-axle truck was chosen. During the tests on February 8, 1957, the opponents of the floating prototype No. 2 were the serial BTR-152V, ZIL-157 and the experimental ZIL-E152V armored personnel carrier. The last car was triaxial with a uniform distribution of bridges over the hull and was equipped with large diameter wheels. This armored personnel carrier was also developed at Grachev Design Bureau and was the representative of the Bureau’s second branch of engineering projects - triaxial off-road vehicles. The most famous serial models of this scheme were the Blue Bird family vehicles used to evacuate landing (splashed) astronauts.

But back to the tests of February 1957. The BTR-152V and ZIL-157 were expectedly eliminated at the stage of overcoming the full profile trench, which Grachev’s machines easily passed. However, the ZIS-E134 was stuck in a much wider trench with a cell for the fighter, but the experienced E152V armored personnel carrier was able to enter and leave forward and reverse. But problems with the reliability of the CV joints of the middle bridge did not allow the armored personnel carrier to successfully complete the tests. The four-axle vehicle was redesigned: the front and buildings were carried a meter or more from the center, leaving the 2nd and 3rd bridges intact. The last bridge had to be made manageable. Such an elongated machine was able to overcome already anti-tank ditches up to 2,5 meters wide. It is interesting that among military engineers there is such a term as entrenchment, with which the new machine was all right. When working on the model # 2 ZIS-E134, SKB developers came up with the idea to dispense with differentials altogether by installing two motors on off-road vehicles, each of which powered its wheels. It also came to the understanding that four axles are quite enough for this type of machine. 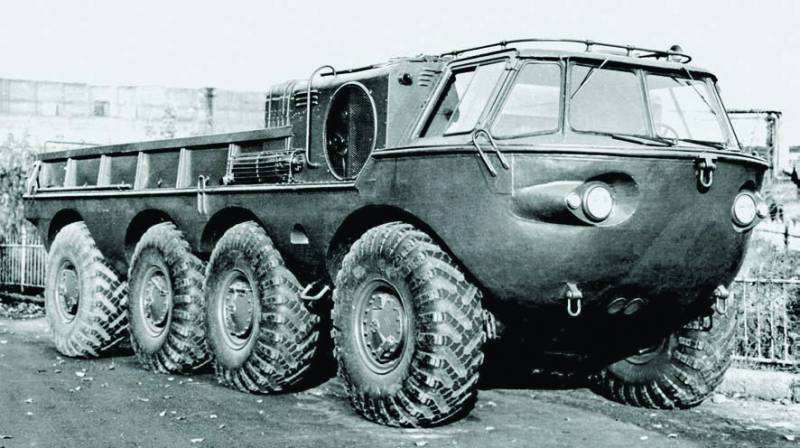 Transport landing amphibious vehicle ZIL-135 (8x8). Source: denisovets.ru
For the first time, a similar scheme with two motors on a four-axis chassis of the SKB Grachev was tested on a floating ZIL-135, in which it is very difficult to recognize the usual missile carrier. According to some sources, its development was initiated at SKB in order to avoid direct competition with SKB-1 products of the Minsk Automobile Plant. As already mentioned in the first part of the material, the Grachev team lost the competition with the heavier MAZ-535. Then the honor of ZIL was protected by the average ZIL-134 tractor, however, the unreliable V12 engine did not allow to compete on equal terms with MAZs equipped with tank diesels. Floating ZIL-135 became the ancestor of the so-called Grachev school of designing wheeled vehicles, the followers of which at the beginning of the XXI century built cars according to these patterns. I must say that the twin-engine scheme is not the know-how of the Grachev team - they resorted to such a layout solution in wartime. 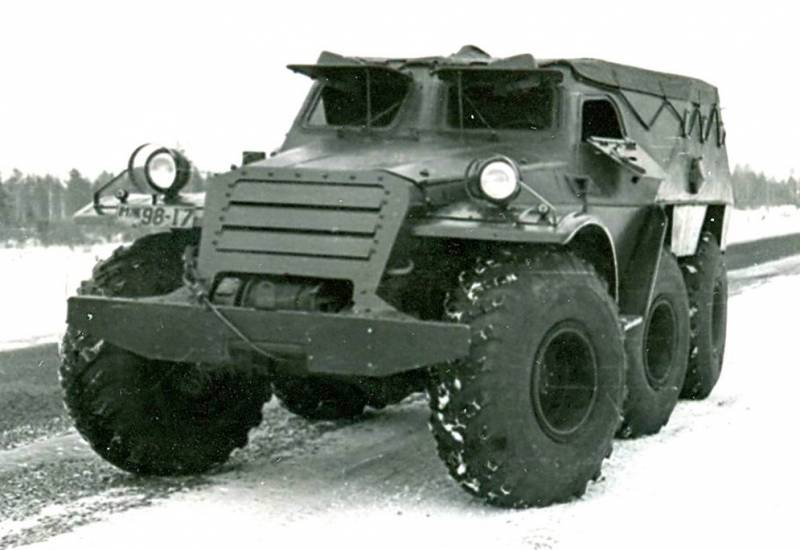 Three-axle BTR-E152V Vitaly Grachev, who lost the comparative tests due to the unreliability of the chassis and transmission. Source: drive2.ru 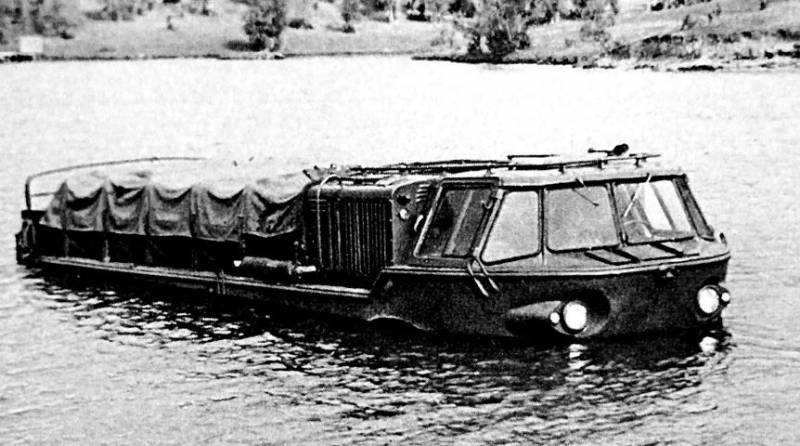 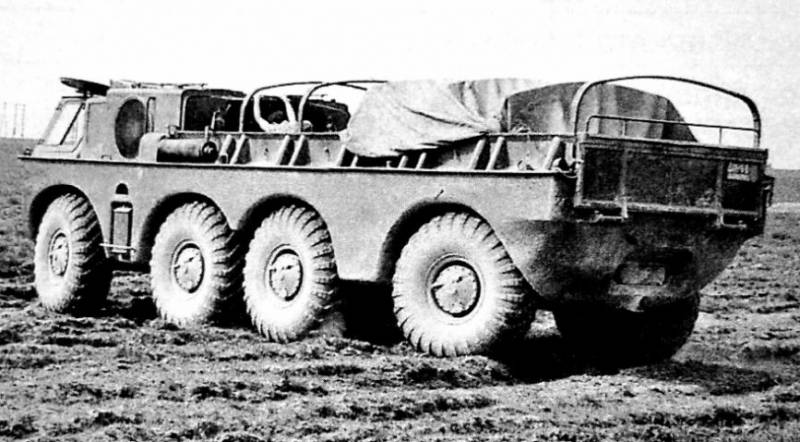 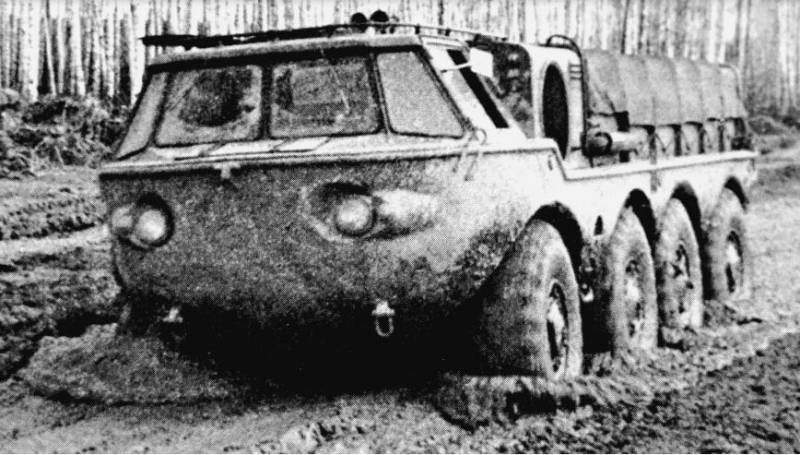 ZIL-135 conquers off-road and water elements. Source: kolesa.ru
Light tank T-70, self-propelled gun Su-76M, experienced tractors AT-8 and AT-14 were equipped with two engines, but not from a good life. Unfortunately, motor starvation has always been a sign of the domestic automotive industry (and not only it), which is why we had to put paired weak engines on heavy cars. So, in the SKB of the Moscow Automobile Plant, for want of a better place, I had to put a couple of experimental ZIL-120VK carburetor developed on the basis of the 6-cylinder ZIL-120. The motors were placed on a transport landing amphibious vehicle ZIL-135, which was built on October 3, 1958 under an agreement with the Ministry of Defense. Amphibian, one of a kind and released in a single copy, is called the index 135 without any literal clarifications. All the other 135th cars of the Moscow Automobile Plant necessarily had letters, or even more than one. A characteristic feature, in addition to the twin-engine layout and the original steering scheme, were wheels rigidly mounted on the chassis. The lack of suspension, according to Grachev, was supposed to level the low-pressure tires, naturally equipped with pumping. Another advantage of the machine without suspension is its low height - the average ZIL-134 artillery tractor of similar dimensions with the suspension was 250 mm higher than the ZIL-135. The body did not need wheel arches designed for suspension moves. In tests, such a reckless technical solution turned sideways to the car - roughnesses of the road up to 25 mm high at speeds of 17-22 km / h caused dangerous resonant body vibrations. And if you accelerate faster on bumps with a height of about 100 mm, then brand galloping appeared, which could be thrown out of the way. 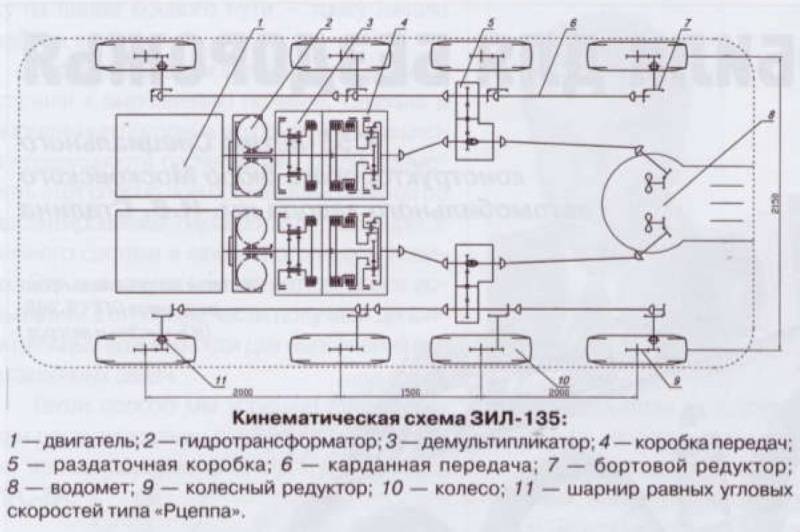 Source: Technology and Arms
When developing a machine, the main purpose of its creation is still incomprehensible. The landing transport vehicle, obviously, meant the delivery of fighters from landing ships to the shore, but in parallel GTR-60 was developing, which was protected by armor and also knew how to swim. The car did not resemble a ballast tractor as an analogue of MAZ-535 either: it lacked power or mass, and it was useless to swim. ZIL-135 was not suitable for the role of a massive army amphibious truck due to its excessive complexity and high cost. It is also possible that a four-axis machine could be developed as a replacement for the aging ZIL-485A amphibian. At the same time, the novelty exceeded it twice in terms of carrying capacity and terrain on land. Obviously, the tactical designation of a floating boat in the Special Design Bureau was not fully understood. Be that as it may, the flat seafloor coupled with a large ground clearance allowed the ZIL-135 to move confidently in the snow to a depth of 0,6 meters. By the way, they returned to the concept of a mass floating machine in the Soviet design bureaus a bit later - in Miass, they worked on secret Urals with displacement bodies and foam floats.

A little about the technical intricacies of amphibians. The amphibian transmission was very complex: two hydrodynamic transmissions (each included a ZIL-111 torque converter, a 2-stage gearbox and a 3-stage planetary gearbox), two transfer cases, eight final drives and eight wheel gearboxes. In the event of failure of one of the motors, there was the possibility of driving on one - for this, they provided for the mode of operation of the planetary gearbox as the leader. In conditions of a flat road, it was allowed to turn off one engine to save a resource and reduce consumption. Moving on the water was carried out by water cannons, and control - three rudders, while maintaining the ability to sail only on one working motor. In the transfer cases responsible for transmitting torque to final drives and water cannons, the couplings had three operating modes: “Movement on land”, “Entry and exit from water” and “Movement in water”. The first mode rotated only the wheels, the second - both the wheels and the water cannon (for successful access to the swampy shore, for example), finally, the third mode was calculated only on the rotation of the water cannon. On water, ZIL-135 with a gross weight of 15 tons (of which 5 tons of payload) developed a speed of up to 10 km / h.

Since the ZIL-135 was developed under an agreement with the Ministry of Defense, it was necessary to look for a niche for him in the army. Naturally, in the expensive version of the transport and landing truck, such an amphibian was not needed by anyone. After the 135th car proved its high cross-country ability and buoyancy (amphibian was on a par with ZIL-485 on water), it was time to think about its practical application. The length of the cargo platform, in principle, allowed the installation of tactical missiles, which at that time were developing intensively. In addition, the military leadership was looking for a suitable wheeled platform for the 2K6 Luna complex - the tracked base of the PT-76 amphibious tank did not satisfy with shaking and low resource of the chassis. And here the ZIL-135 floating chassis came in very handy.

The installation of a tactical missile justified the purpose and capabilities of the chassis. It was a very serious “toy” capable of carrying a ZR-10 nuclear warhead. On May 28, 1959, Vitaly Grachev sent the car to Stalingrad on its own for the installation of the Luna missile system (the corresponding order of the Council of Ministers was issued on April 8). Amphibian at the plant was additionally equipped with rear jacks and stops under the front wheels. By the way, the ZIL-135 had a competitor in the form of the Yaroslavl heavy triaxial YAZ-214, but the cross-country ability of this car could not be compared with the four-axle SKB ZIL. After installing the “Moon”, the car received the name Br-226-II (or 2P21) and went to the Prudboy training ground for testing. On land, everything was fine: the chassis, although it was overloaded with a nine-ton launcher, was quite capable of coping with its transportation tasks. 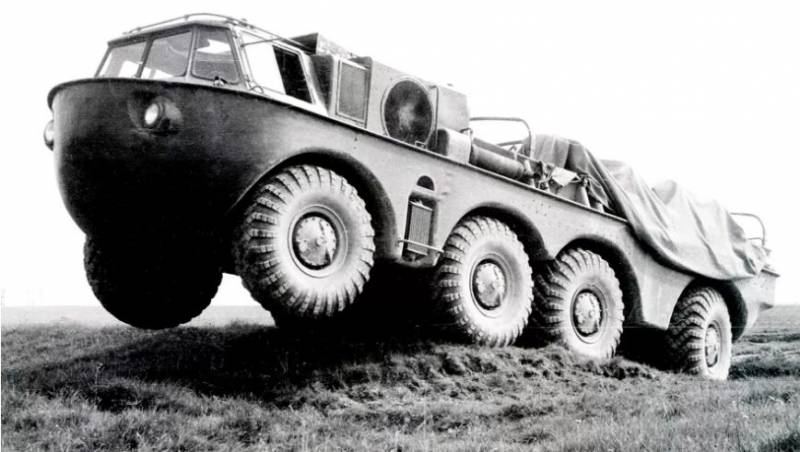 Pay attention to wheels that do not hang out on bumps. There was no suspension on the ZIL-135B car. Source: kolesa.ru

ZIL-135B. Source: trucksplanet.com
But when the Br-226-II with a missile entered the waters of the Don, trouble almost happened. Firstly, the curb weight of the car now seriously exceeded the estimated 15 tons, and secondly, the center of gravity shifted up. As a result, the floating missile carrier nearly drowned. Given that there could be a nuclear warhead on board the amphibian, swimming experiments were stopped. The second embarrassment was waiting for ZIL-135 during the first firing. The fact is that the Luna starts from an inclined position, dousing the launcher with hot gases with a pressure of several tons. As a result, the ZIL cockpit was deformed, the windshields were scattered and, in general, the appearance of the machine after start-up required cosmetic repairs. It would seem on this history ZIL-135 missile carrier can be completed, but at the end of October 1959, modification “B” was born. In this machine, the Grachev Design Bureau took into account the experience of testing the previous model and lengthened the wheelbase by 400 mm in an attempt to avoid galloping. The motors were replaced with serial 110-horsepower ZIL-123F from armored personnel carriers. In total, four prototypes were produced that did not make much impression on the military, and the topic of floating wheeled vehicles was temporarily covered. And the story of the weak stability of the base chassis to the hot gases of a tactical missile found an unexpected continuation.

Associate Professor of the Department of MVTU. Bauman Valery Tsybin suggested assembling a cabin made of fiberglass, which is capable of reversibly deforming. The idea was accepted and for the first time in the automotive industry they organized a site for the assembly of fiberglass products at SKB ZIL. After all the adventures with the amphibian ZIL-135, Grachev’s office received a task from the military to develop a chassis for a 12-meter container installation of S-5 cruise missiles from the Chelomey Design Bureau. In the course of the experimental work, exclusively land ZIL-135E and ZIL-135K appeared.

As you know, the idea of ​​deploying tactical missiles on wheeled amphibians was not completely abandoned. A decade later, the famous "Point" appeared, placed on a three-axle floating BAZ-5921. This car can also be considered with full confidence the product of the engineering school of Vitaly Grachev.