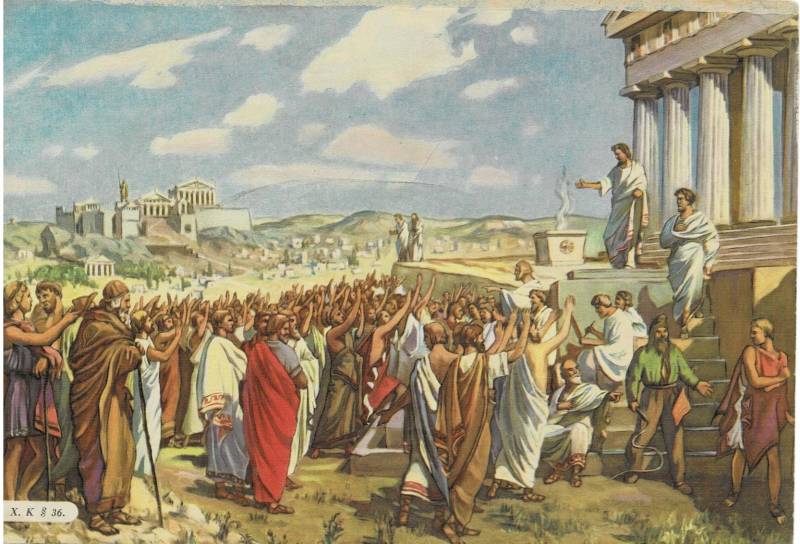 Another picture from the textbook stories The ancient world for grade 5. It is very well shown that, although many of those present on the agora dressed up in white, there are at least as many colored clothes. That is, the crowd of the ancient Greeks cannot be imagined in the form of people draped in white cloaks

... and take off the linen clothes that he put on when entering the sanctuary ...
Leviticus 16:23

Culture of clothes. Last time we talked about the clothes of ancient Egypt. It turned out that there were no special clothes: both kings and slaves wore skirts, differing only in the quality of the fabric. And very similar clothes were in Crete. But only for men. Women's fashion Cretans was very original and so to the end and not understood. On the frescoes and statuettes you see women dressed in a strange outfit that has never been seen before: a skirt to the floor, which apparently consisted of several skirts worn one on top of another, a short, sophisticated apron, a short-sleeved vest laced on the stomach . The chest is bare. Complex hairstyles adorn the heads of intricately dressed Cretans, some wearing tiaras on their heads. But the clothes of the athletes, whom we see on the frescoes depicting games with a bull, are very simple: all the same loincloth and nothing on top. 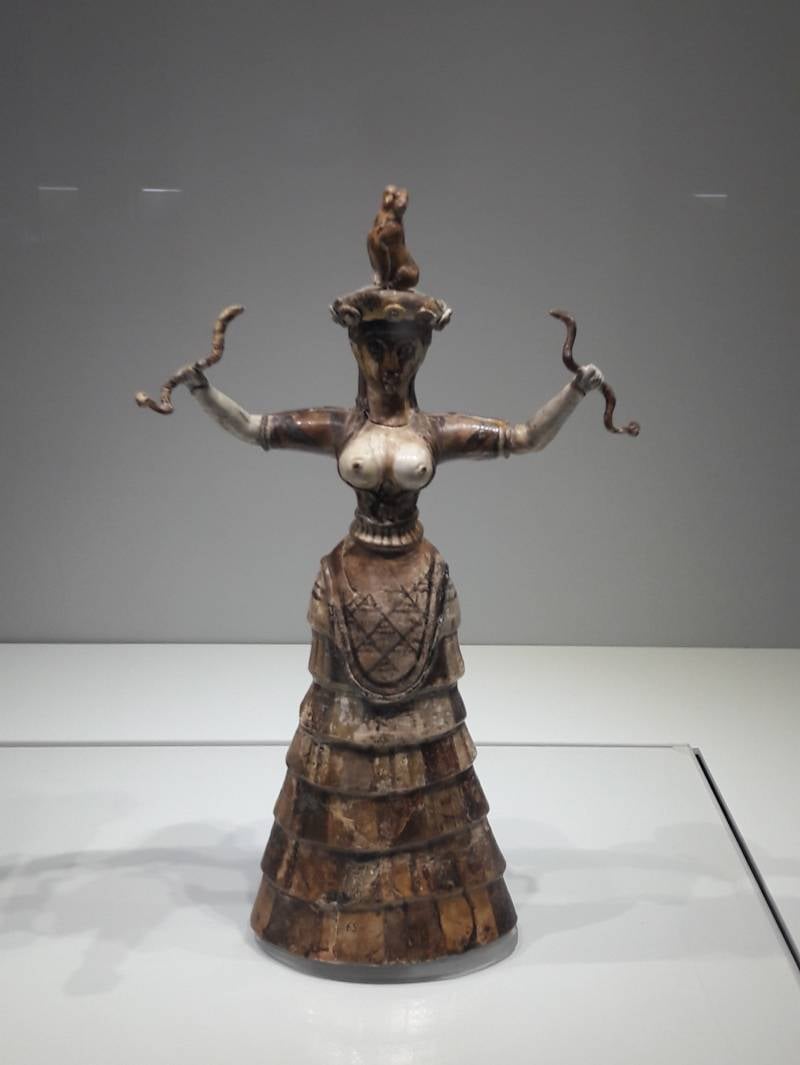 The famous Cretan "Goddess with snakes." Height 34,3 cm. Faience. OK. 1600 BC Figurine from the Archaeological Museum in Heraklion
Archaeological finds suggest that Cretans and Cretans loved jewelry and knew how to make it. Gold was used, but also colored glass beads and pendants were also in use. And the Cretans adored perfumes, all kinds of aromatic essences and rubbing, as evidenced by glass vessels for cosmetics found in Crete and neighboring Cyprus. 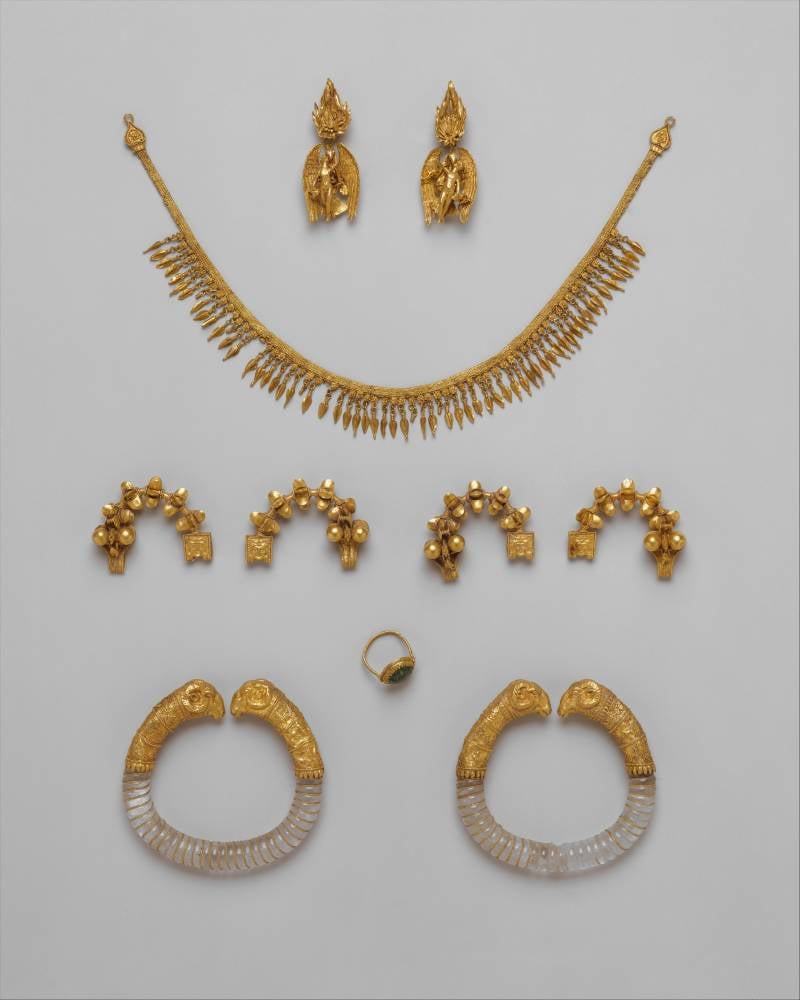 Gold beads, earrings, pendants, ring and bracelets made of gold and glass. Archaeological Museum of Heraklion 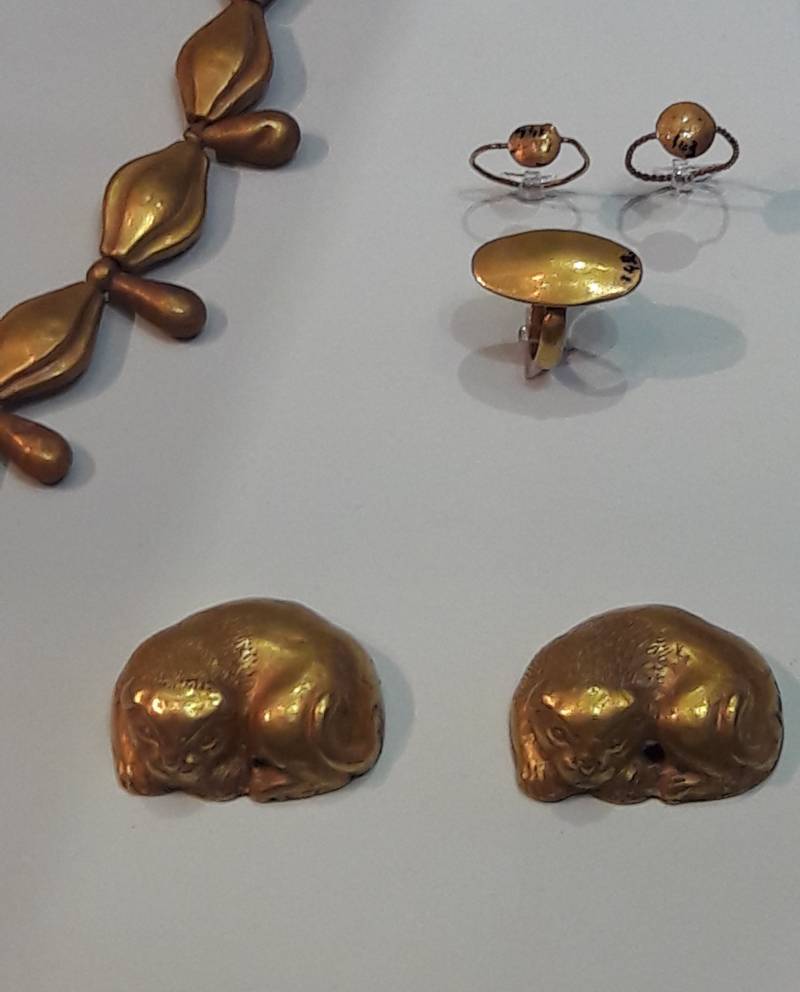 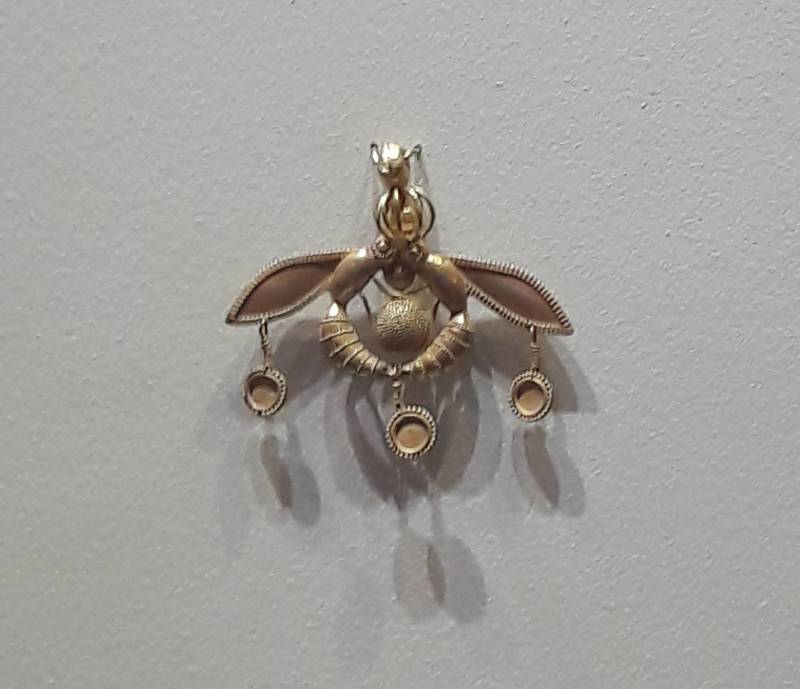 Fine suspension of very fine workmanship. Archaeological Museum of Heraklion
Well, then the Dorians came and spoiled all this beautiful fashion. The era of continental Greece came, where the mods were already completely different. First of all, it was associated with the tissues used. The main fabric of the Greeks was wool, and only then linen was on. Silk and cotton came to Greece only from the East. The Greeks loved ornamented fabrics, but only primitive ornaments were woven: palmettes, meander, “beads”, “traveling wave”. The fabric was usually dyed. In the course were ocher colors of various shades, red, blue, brown. The purple dye obtained from the purple sinks was very expensive. White clothes were also decorated, usually with an embroidered border. 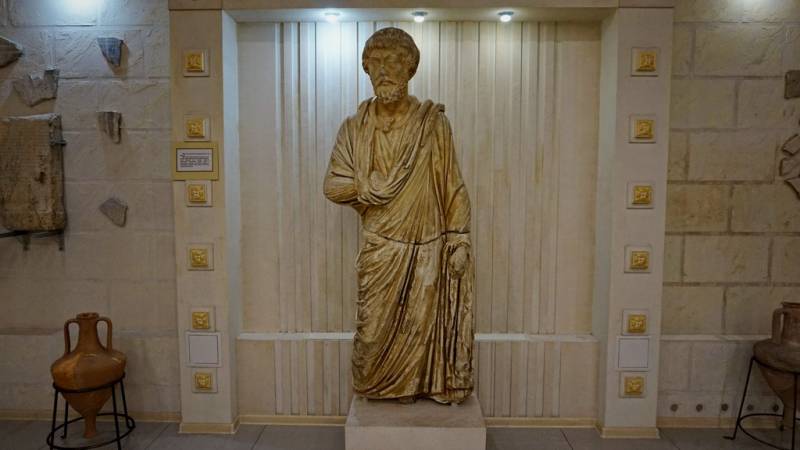 Neocles, ruler of Gorgippi. The original in the museum. Pushkin, and this copy at the place of the find is in the museum of Anapa, under which the ancient Gorgippia lies. Dressed, as befits the ancient Greek, moreover, to a free and unburdened person. And the hairstyle is also appropriate ...
The clothes themselves were very simple. The bottom garment was a tunic of a piece of cloth folded in half with a hole for the head. Threw it, belted it, and you are dressed. It could be a tunic made of two pieces of fabric. Then he was fastened to his shoulders with brooches. Sleeves, if any, are short. Exonomy chiton was short, to the middle of the hips, and was the clothing of warriors, artisans and slaves. Most often they fastened it only on one shoulder, on the left. Everything is so simple that you don’t need to show anything, but we will look at such clothes as a gimatiy in more detail, and ancient Greek ceramics will help us with this. 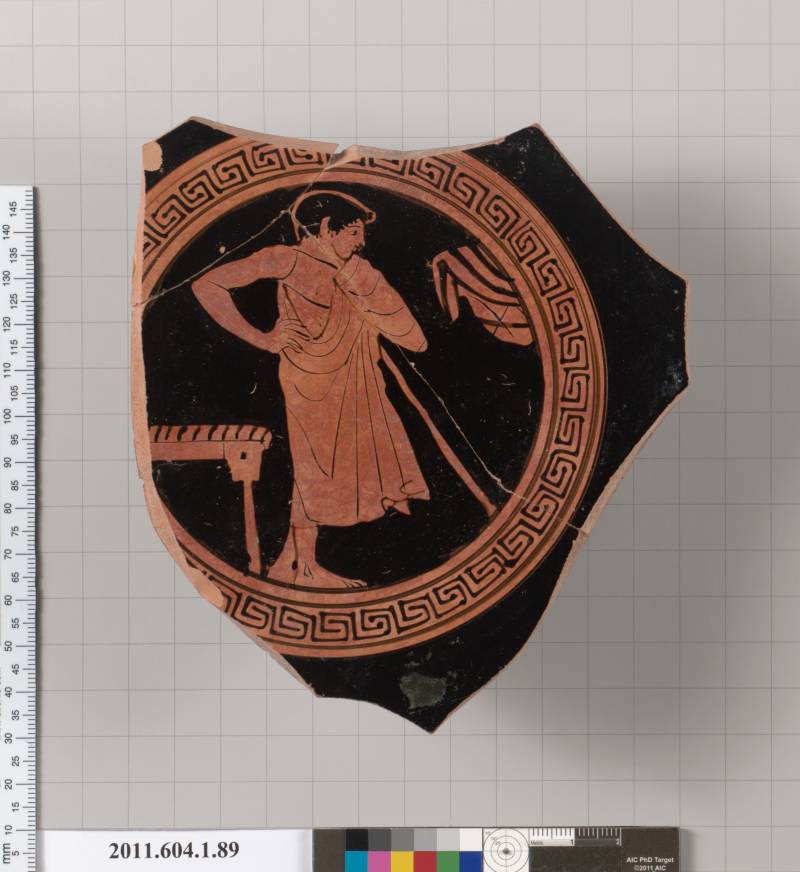 Boy leaning on a stick. Dressed in Hymatium. Terracotta fragment of cilic. The second quarter of the XNUMXth century BC e. Metropolitan Museum of Art, New York
A free Greek wrapped himself in a hymatium (a woolen cloak over four meters long) when he went outside. Ordinary citizens were wrapped so that at least one hand was left free, but philosophers and speakers hid both hands under it: they say, we do not get our own bread with our hands! They taught us how to wear a hymatium from childhood, because it was not easy to wind it beautifully, although wealthy citizens helped slaves to dress. 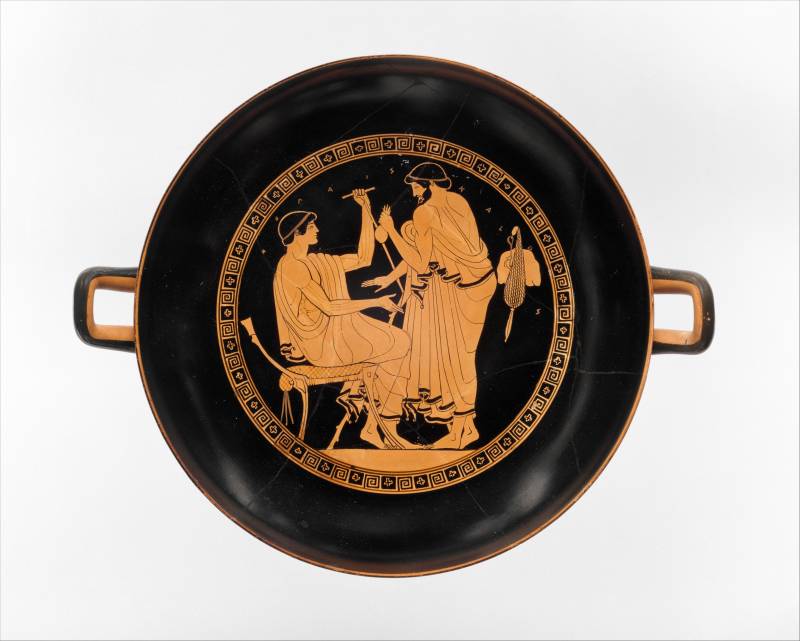 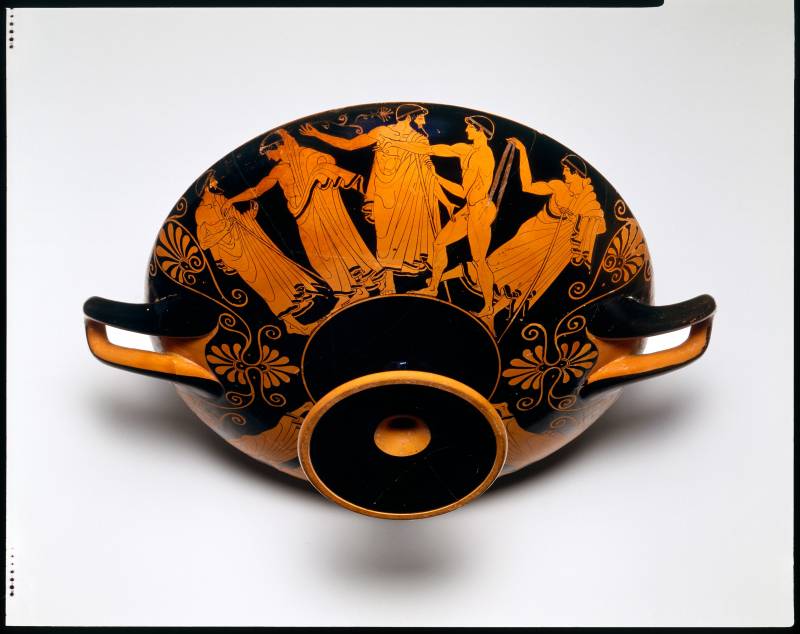 The same kilik. Side surface. Obviously, athletes and their mentors are depicted here. 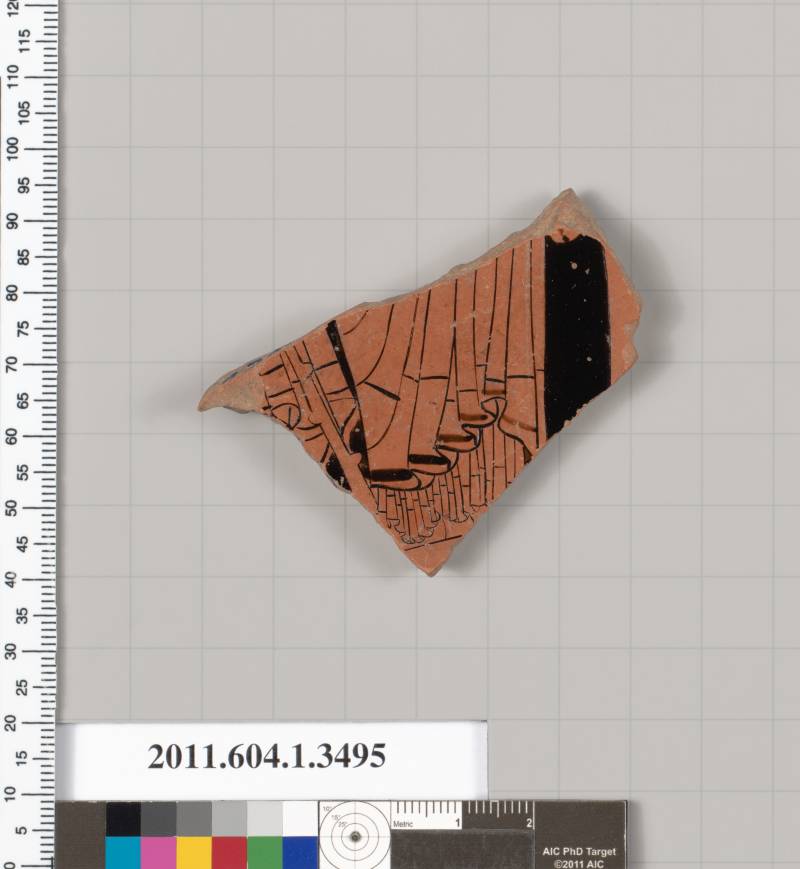 To get such beautiful folds, pieces of lead were sewn into the fabric. Terracotta fragment of kilik, 490–480 BC Metropolitan Museum of Art, New York
The clammy cloak was worn by riders. The ends were fastened with his brooch on the right shoulder. Shoes could be very simple (ipodimati sandals, consisting of a sole and straps attached to it) and very complex and rich: such, for example, were boots with open toes (endromids), with beautiful lacing in the front and leather shafts in the back. The skin could be gilded, and even embroidered with pearls. 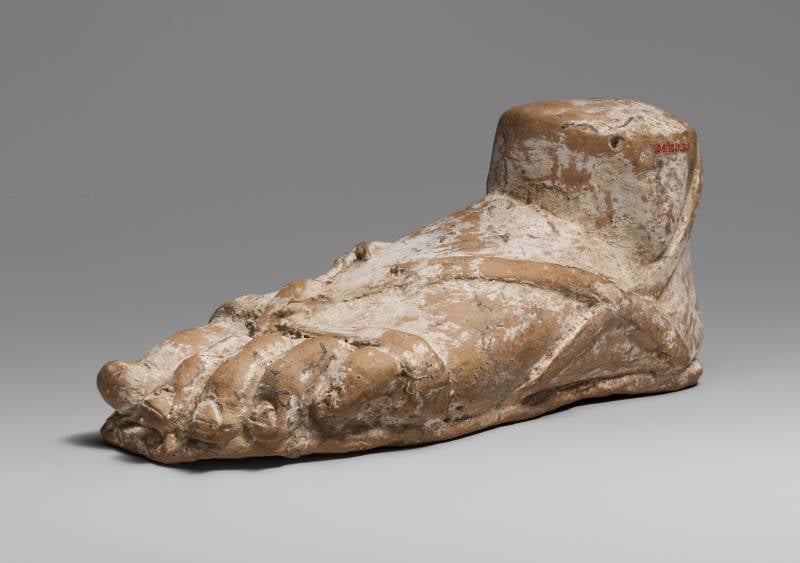 Ankle with sandal, terracotta. Southern Italy, second half of the XNUMXth century BC. Metropolitan Museum of Art, New York
Now about the hairstyles. In fashion, the Greeks had moderate beard in men, smooth cheeks in young men, and blond was considered the most beautiful hair color. The Spartans wore long hair that was carefully combed. Hats were worn, but rarely. Mostly traveling. Then they put on felt hats. Again, the Spartans wore high hats - pili, in the form of which their soldiers then appeared a helmet. These helmets became the same symbol of Lacedaemon as the blood-red tunic - exomis, which the Spartans began to wear over time, abandoning the armor for the torso and thighs that had previously been used, as well as bronze fingertips on the legs. And the Spartans noted in history with their red cloaks, they were often called so: warriors in blood-red cloaks. But mobility and training turned out to be more significant for them than individual protection. Helmets and shields - they considered it sufficient! 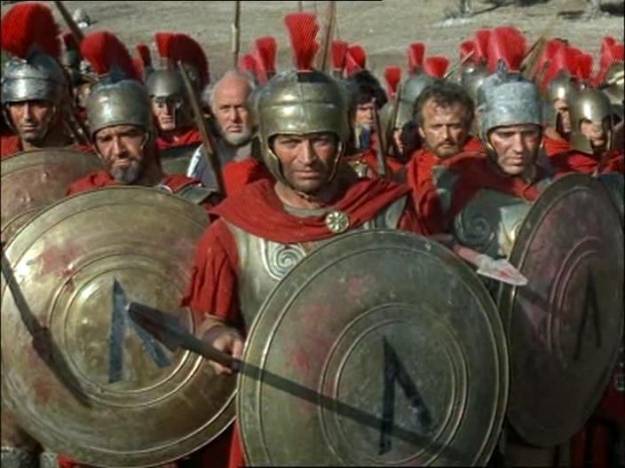 A shot from the film "Z00 Spartans" 1962. The film is somewhat fabulous, but the costumes in it are shown very true 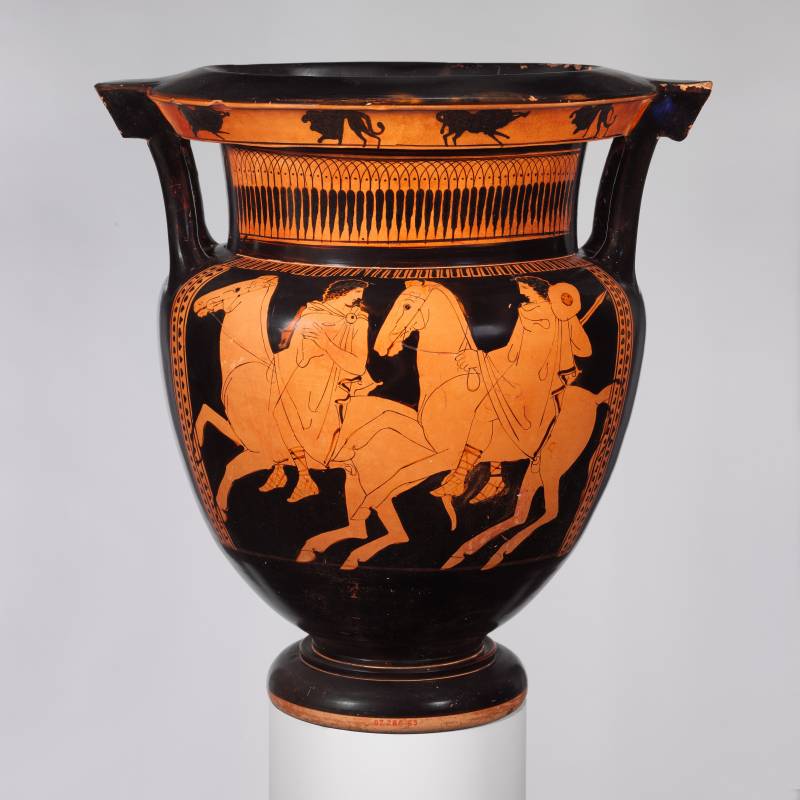 Terracotta red-figure crater (vessel for mixing wine and water), approx. 430 BC On it riders in cloaks-chlamis and endromid boots
As for women, their underwear was a tunic, also cleaved by brooches on the shoulders and draped around the body. Fabric - wool or linen. Colors are very different. Dorian tunes were wide. Ionian - narrow. Girls girdled him on a belt, married women under a breast. At the same time, both those and others could wear it with a fling, straightening it through the belt. The tunic could be decorated with embroidery and ornaments on the bottom and the edge, and yet it was indecent to leave the house in it. Peplos was worn over the tunic outside the house. The peplos fabric was 1,5 m wide and 3-4 m long. Again, its color could be very different, but the purple fabric, from blue to dark purple, was the most expensive. They wore raincoats similar to men's, as well as light gas calipt scarves. The shoes were similar to men's and had no heels. 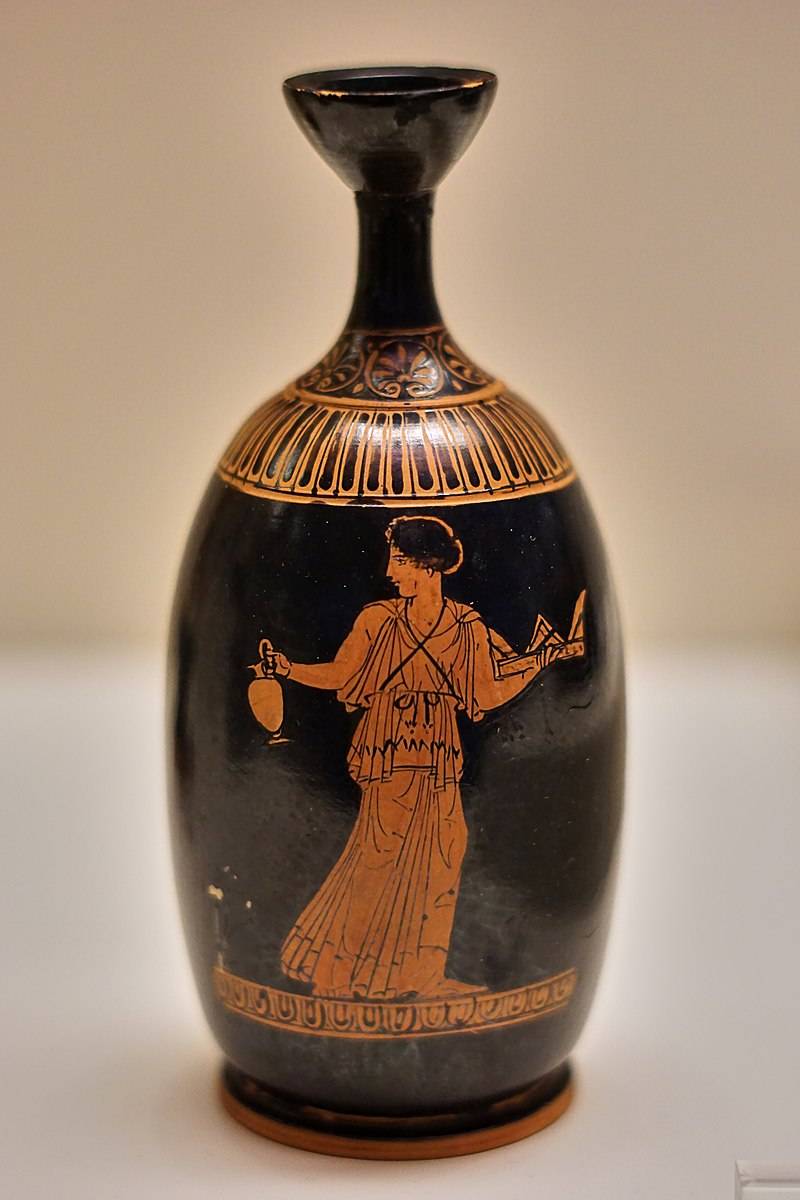 A woman with ojohoya (dr. Greek “jug for wine” - an ancient Greek jug with one handle and a round or trefoil whisk resembling a clover leaf) in a tunic with a lap. Red figure lekif. Attica. Around 420 BC National Archaeological Museum of Athens 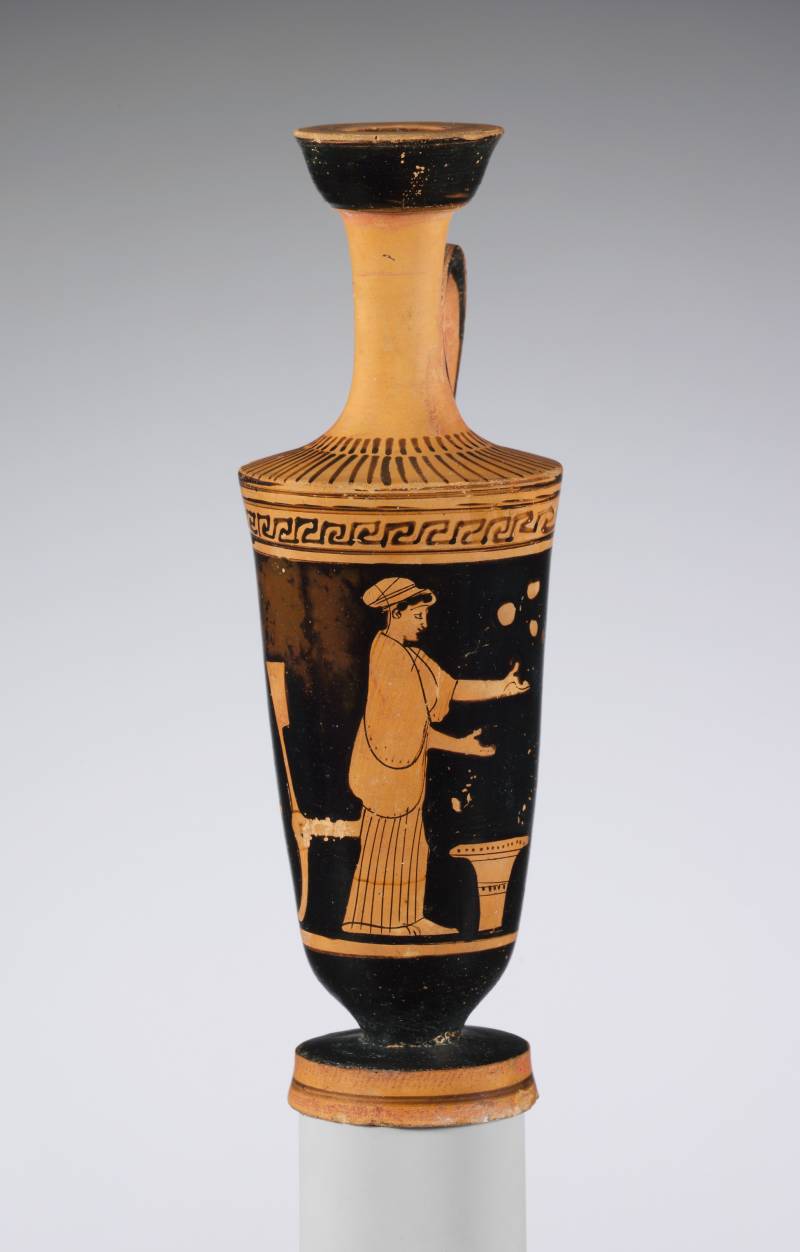 Woman juggling balls. Red-figured lekif, 2nd quarter of the XNUMXth century BC e. Metropolitan Museum of Art, New York
Like men, it was blond, especially “golden”, hair that was considered the most beautiful. They were pulled into a knot at the nape of the neck - corymbos, or, on the contrary, was lowered onto the forehead so that it was not high (two fingers, no more!), And curls were lowered onto the shoulders. 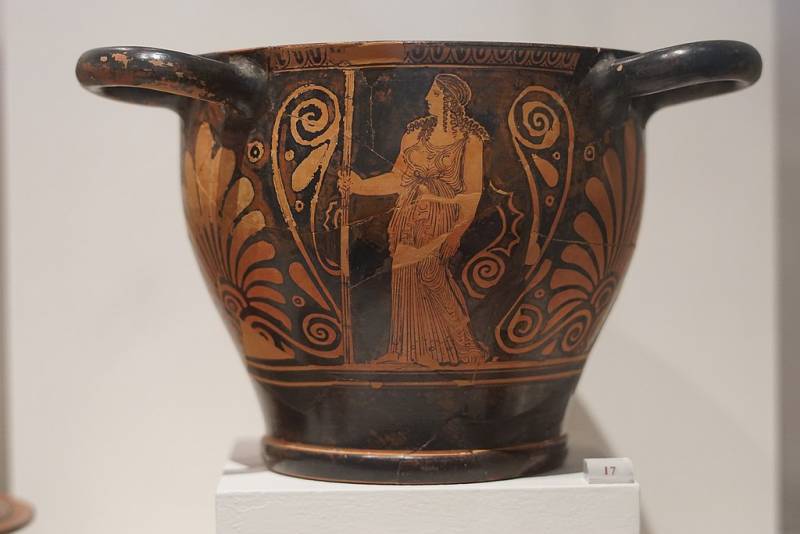 Woman with curled hair. Scythos (an ancient Greek ceramic drinking bowl on a low leg with two horizontally located handles) from Tanagra. The end of the XNUMXth century BC e. National Archaeological Museum of Athens 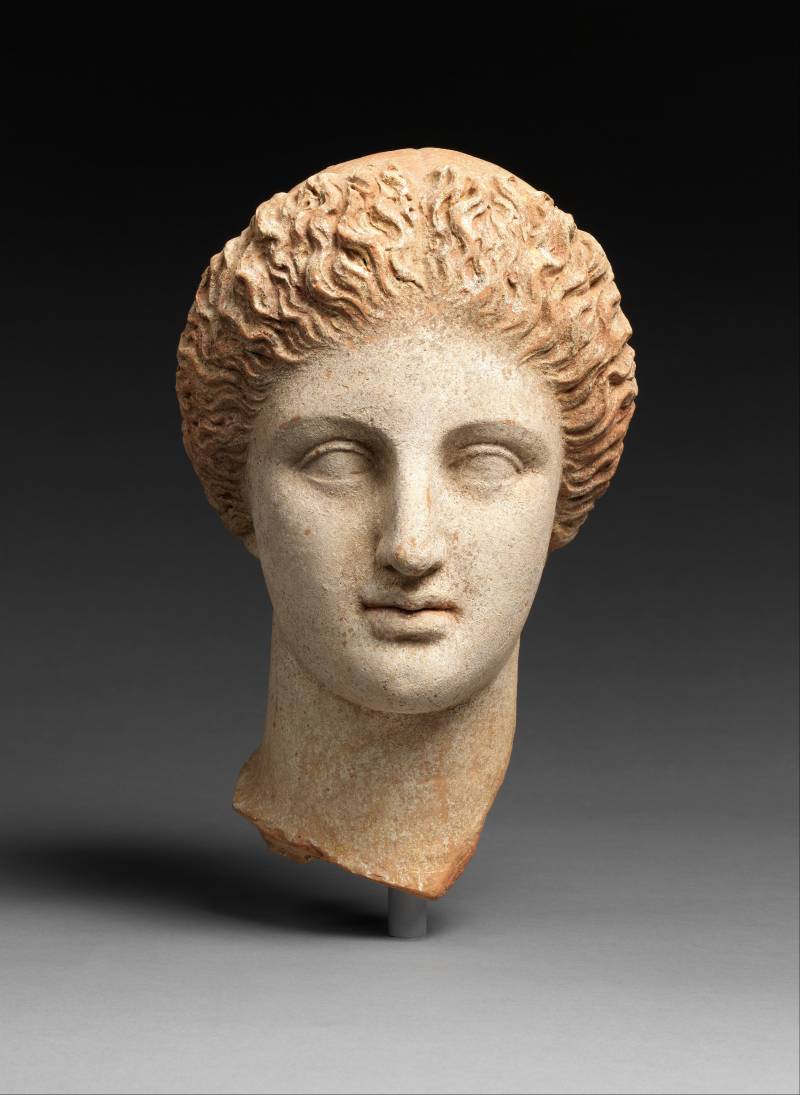 Terracotta head of a woman, Tarent, late XNUMXth century BC e. Metropolitan Museum of Art, New York
And, of course, Greek women wore many jewelry and did not spare cosmetics. They whitened and blushed their faces, made eyebrows, painted eyelashes, applied eye shadow, tinted their lips with berry juice mixed with fat. And even perfumes choked even clothes. Moreover, perfumes were stored in elegant ceramic vessels - lekifs, often genuine works of art. Today they adorn the expositions of the most famous museums in the world, and then they were in almost every house of a free Greek woman. There were also fashionable parasols from the sun (not folding!) And fans in the form of a tree leaf. Of the jewelry itself, gold bracelets on the forearm in the form of a curled snake, often with rubies in the eyes, were popular. 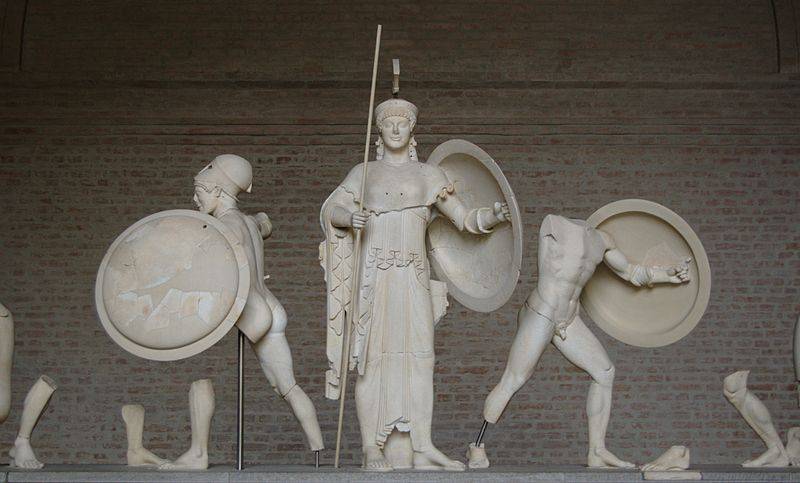 Western pediment of the temple of Athens from the island of Aegina. Five central figures (so-called aeginets). The figure of Athena Pallas, dressed in peplos with a cape on his shoulders, 505-500. BC. The figures were discovered in 1811, and in 1813 purchased by Ludwig I of Bavaria for the Glyptothek in Munich

Reconstruction of the western pediment
Nevertheless, despite the abundance of jewelry, the costume of the Greek woman was always visually very simple and did not contain any excesses.

Author:
Vyacheslav Shpakovsky
Articles from this series:
Bull skin and wooden slippers: clothes of hunters and warriors of the Stone Age
Ancient Egypt: clothing of the pharaohs, warriors, peasants

Ctrl Enter
Noticed a mistake Highlight text and press. Ctrl + Enter
We are
Chernobyl notebook. Part of 3Father told
274 comments
Information
Dear reader, to leave comments on the publication, you must to register.