Sea Dragon are on charge 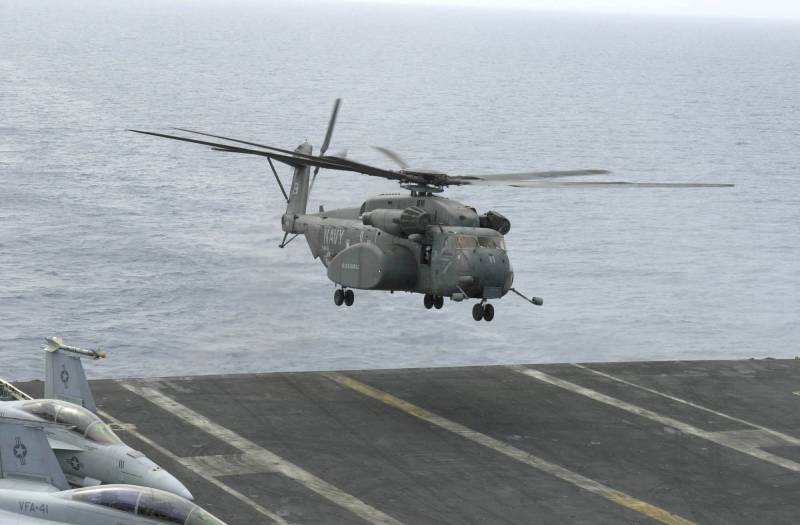 In the mid-eighties, the U.S. Navy received the latest Sikorsky MH-53E Sea Dragon helicopter, designed for use in the mine defense system. This machine is still the only example of this class, but in the near future its operation may end. "Sea Dragon" managed to become obsolete morally and physically, and also managed to show excessive accident rate.

In 1980, Sikorsky began mass production of the CH-53E Super Stallion multi-purpose helicopters for the US Air Force. The naval forces were also interested in such equipment, which led to the purchase of almost 180 helicopters. In addition, the Navy ordered the development of a specialized modification intended for use in mine defense.

The mine modification of the helicopter received the designation MH-53E Sea Dragon. The customer demanded to refine the fuel system and increase the amount of fuel, including through the use of additional internal tanks. The helicopter was supposed to be able to tow surface and submersible platforms with mine action equipment. To use them, it was necessary to install new units, refine the control system, etc. 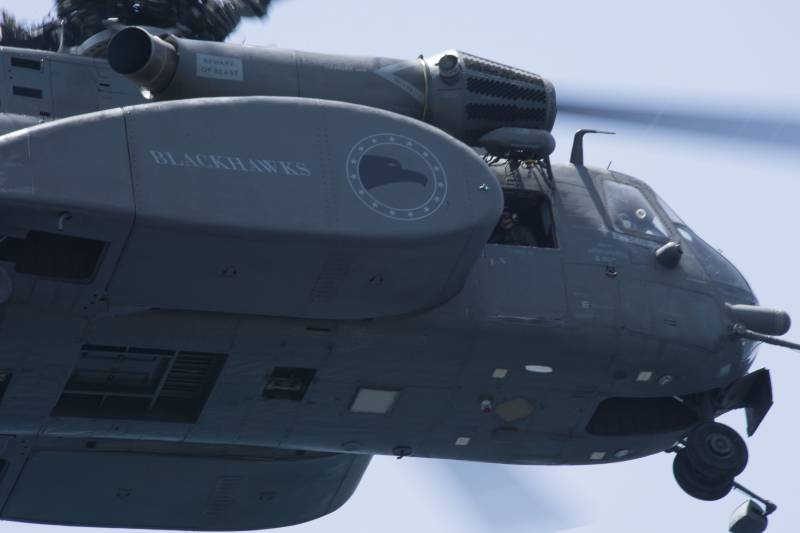 A characteristic feature of the Sea Dragon helicopter - onboard sponsons with increased fuel tanks
The prototype helicopter MH-53E was built in 1981, at the end of December the first flight took place. The next few years were spent on fine-tuning the design and testing of the target equipment. The first squadron of minesweepers reached initial operational readiness in 1986. Since then, Sea Dragons have been actively used to solve a number of basic tasks and have been an important component of marine aviation US Navy.

In general, the design of the MH-53E follows the basic design of the CH-53E. The helicopter is built according to the classical scheme with one main and one tail rotor. The power plant is built on the basis of three General Electric T64-GE-419 turboshaft engines with a capacity of 4750 hp. Through the gearbox they rotate the seven-blade main rotor with a diameter of 24,1 m. 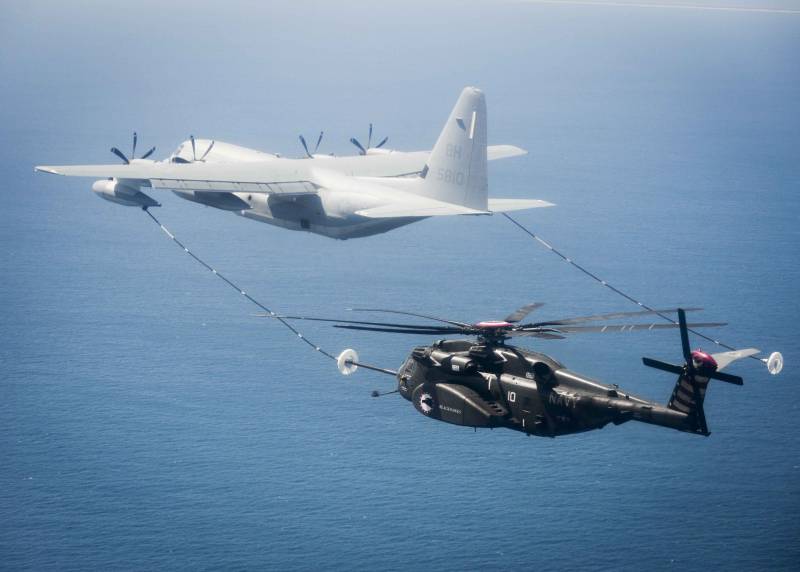 Helicopters MH-53E have in-flight refueling equipment that increase the duration of patrols
MH-53E externally noticeably differs from the base CH-53E. The most noticeable difference is the drop-shaped side sponsons used as high-capacity fuel tanks. To further increase the range and duration of the flight, a rod for refueling in the air was saved.

A special frame is suspended under the tail boom. With its help, a tow rope for the target equipment is removed from the cargo compartment. In addition, it restricts its movement and does not allow it to hit the tail boom or the tail rotor.

The main objective of the MH-53E is the use of various mine equipment, made in the form of suspended or towed products. In addition, a helicopter can carry people or goods. Depending on the task, the cargo compartment can accommodate an additional fuel tank, space for 55 people or 14,5 tons of cargo. 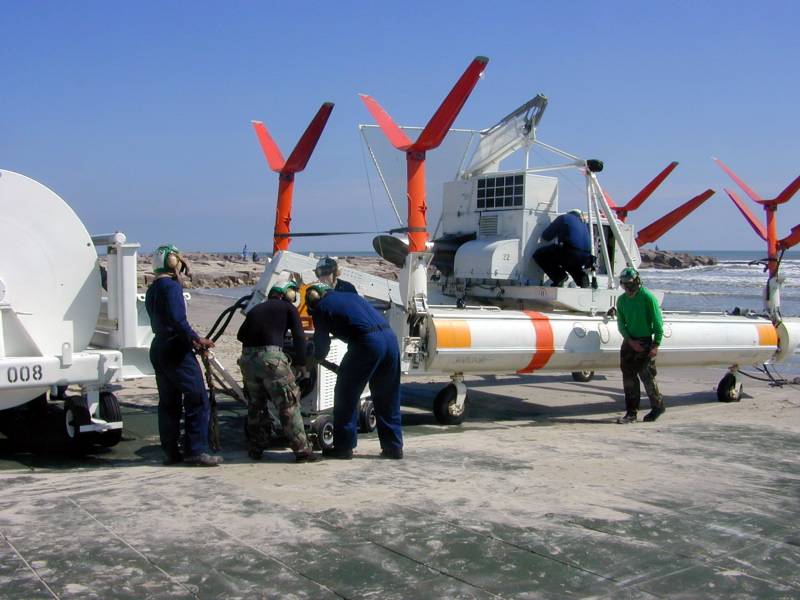 Pontoon Mk 105 with magnetic trawl
The helicopter crew includes at least three people, two of them are responsible for piloting. The crew also includes operators of the target equipment and flight engineer. If necessary, the latter can use a heavy machine gun GAU-21 mounted on the aft ramp.

The helicopter is capable of speeds up to 278 km / h. By increasing the capacity of the tanks, the maximum flight range was increased to 1050 nautical miles (1945 km). During the implementation of mine defense, the machine can remain in the area of ​​work for several hours.

MH-53E is designed to conduct "air defense" - Airborne Mine Countermeasures (AMCM). To solve such problems, several types of mowing equipment are used, made on the basis of surface or submersible platforms. Large products are transported to the place of use on an external sling, small ones are inside the cabin. They are lowered into the water and towed along a given route. 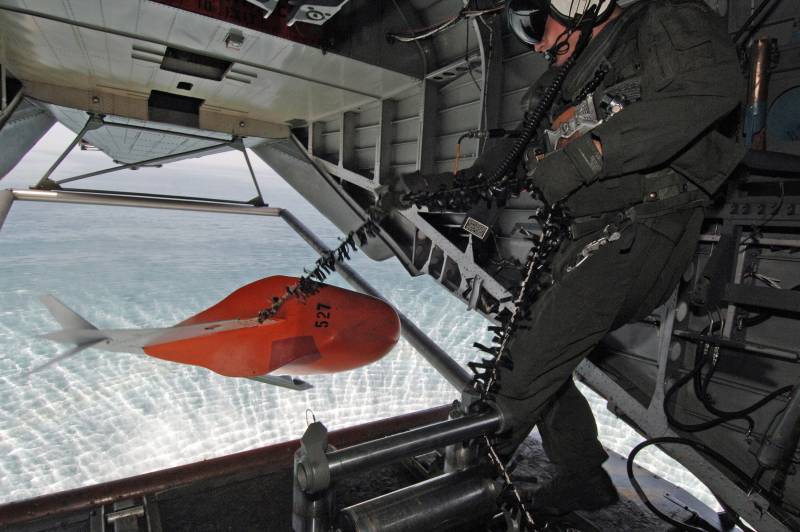 The operator releases the Mk 103 submersible trawl
Three types of towed devices with different equipment are designed for the Sea Dragon helicopter. The Mk 103 is a submersible with a mechanical trawl. On the pontoon Mk 105, a magnetic trawl is installed, acting on mines remotely. A towed device with side-view sonar station AN / AQS-14A is also available.

A typical mine clearance operation begins with the use of a side-view GAS and the detection of enemy mine landings. After that, the MH-53E can take the pontoon of the desired type onto the suspension and begin trawling. High flight performance allows you to process relatively large water areas in one flight, finding and clearing mines.

In the service of two countries

The U.S. Navy began to launch the MH-53E helicopter. Serial production of such equipment on their order was launched by the mid-eighties. By 1986, the fleet received and mastered the first squadron of such equipment. Subsequently, shipments continued, and by the end of the decade there were 46 Sea Dragons in naval aviation. 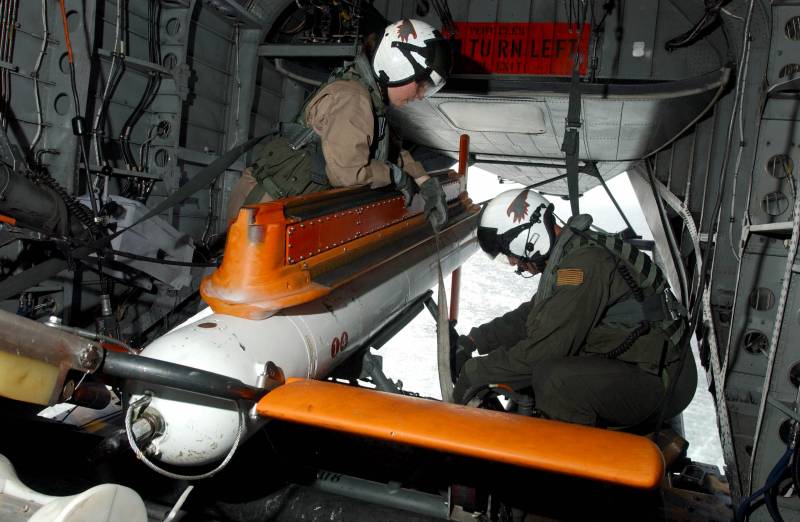 Preparing for the release of submersible GAS AN / AQS-14A
Soon interest in such a technique was shown by the Naval Self-Defense Forces of Japan. For them, Sikorsky built 11 helicopters, which entered service under the designation S-80M. Japanese MSS used the technique for its intended purpose in missions such as AMCM. Over time, the helicopters developed a resource, and the command decided not to carry out modernization. The latest S-80M was decommissioned in 2017.

Helicopters MH-53E and S-80M were actively used both for their intended purpose and as air transport. In 1991, American helicopters were first involved in real combat work. During Operation Desert Storm, they searched and trawled sea mines in the Persian Gulf. In 2003, they again had to solve the same problems in the same region. In 2004, minesweeper helicopters, along with other equipment, were used as vehicles to assist victims of the Indian Ocean earthquake and tsunami. 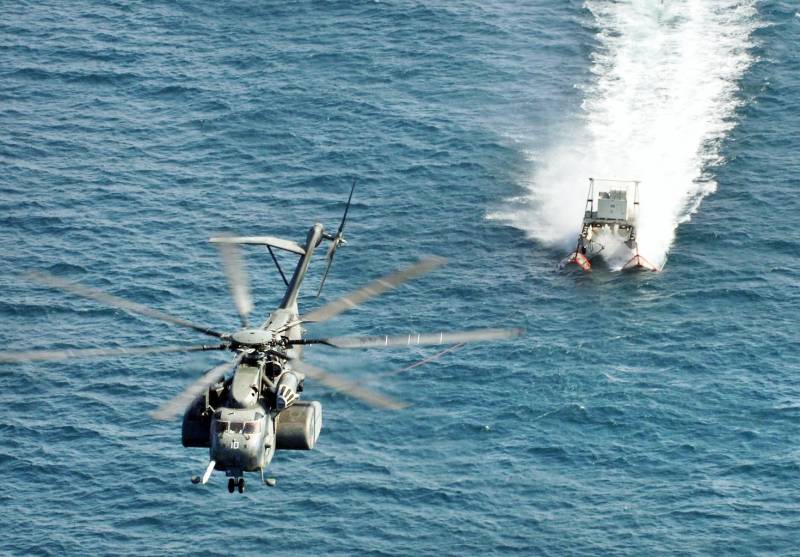 Helicopter MH-53E tows the pontoon Mk 105
According to well-known data, now the U.S. Navy has two Sea Mine anti-mine squadrons - HM-14 and HM-15. The squadron HM-12 is reserve. Only 28 vehicles remain in service, another 7 are transferred to the reserve. The remaining machines were lost or decommissioned under various circumstances from 1986 to 2014.

U.S. Navy helicopters MH-53E are still in service. In the recent past, a “life cycle extension” program has been implemented. With its help, the resource of equipment was extended to 10 thousand flight hours. This will allow the operation of helicopters, at least until 2025.

For some time now, the MH-53E is considered the most wrecking model in American naval aviation. According to published information, for 100 thousand flight hours there are 5,96 flight accidents of “Class A” with serious structural damage or death. For other Navy helicopters, this figure does not exceed 2,3. During operation in incidents with "Sea Dragons" killed 32 people. 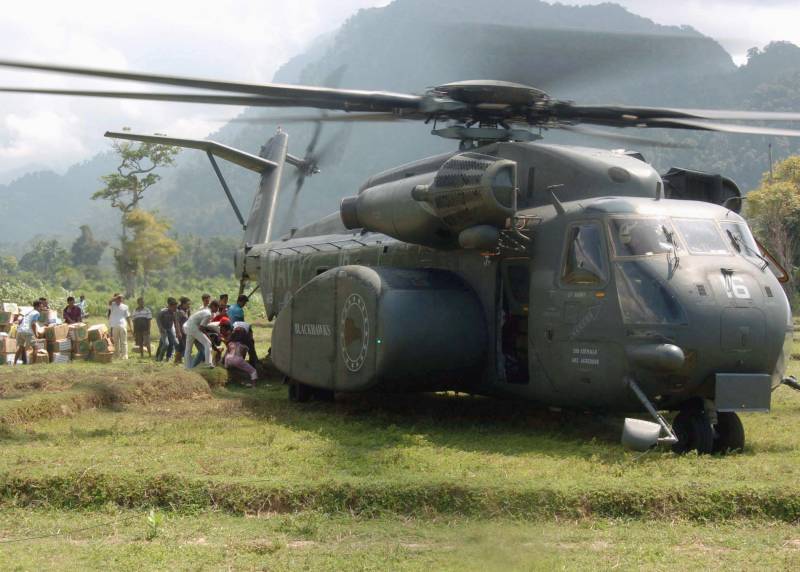 "Sea dragon" in the role of transport to help those affected by the earthquake and tsunami. Sumatra, January 23, 2005
A similar combination of several key factors leads to similar operational results. So, the use of equipment within the AMCM involves long flights over the sea at low altitude with towing a pontoon. At the same time, the helicopter has an outdated analog-digital control system without a developed autopilot. In difficult situations, pilots have to rely only on themselves.

Thus, the main work of the MH-53E is particularly complex and leads to serious risks and prerequisites for flight accidents. Moreover, the helicopter does not fully comply with the requirements of such operation.

According to recent plans, Sikorsky MH-53E Sea Dragon helicopters were supposed to remain in operation until 2025 and solve the problems of mine action. By the indicated dates, it was planned to form a fairly large grouping of Littoral Combat Ship ships with anti-mine capabilities, after which it would be possible to abandon old helicopters. 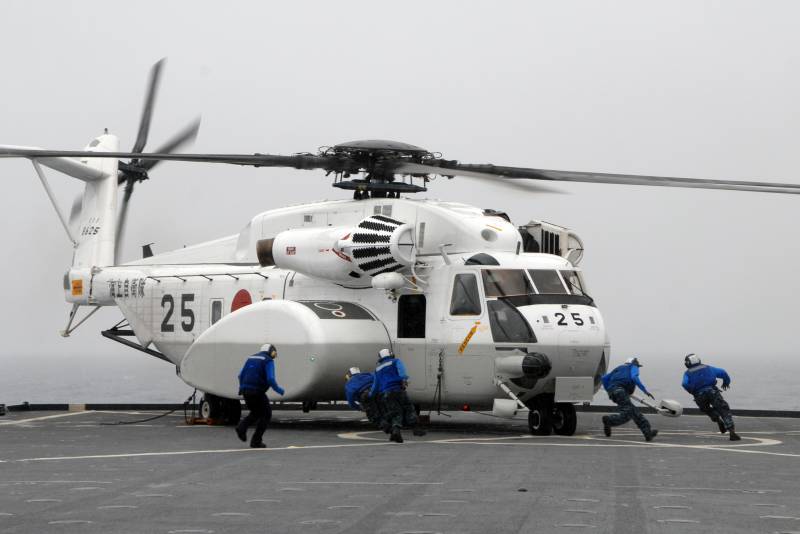 Japan S-80M Helicopter
Such plans will begin to be implemented in the near future. A draft military budget for FY2021 has recently been published, which proposes to begin writing off the remaining MH-53Es from 2022. Given the small number of surviving helicopters, it can be assumed that the process of abandoning them will not take much time and will be completed no later than 2025.

For several decades, the MH-53E Sea Dragon minesweepers regularly participated in patrols and exercises. In addition, they were attracted to real combat work. "Sea dragons" have shown themselves to be an effective, but quite difficult to use, mine defense instrument. Now their operation is coming to an end. Apparently, the remaining MH-53E will no longer be able to celebrate the fortieth anniversary of its service.

Ctrl Enter
Noticed a mistake Highlight text and press. Ctrl + Enter
We are
The heaviest helicopter. "Royal Stallion" for the German militaryAn-12 in Afghanistan
2 comments
Information
Dear reader, to leave comments on the publication, you must to register.