What will give the fleet VNEU the second stage 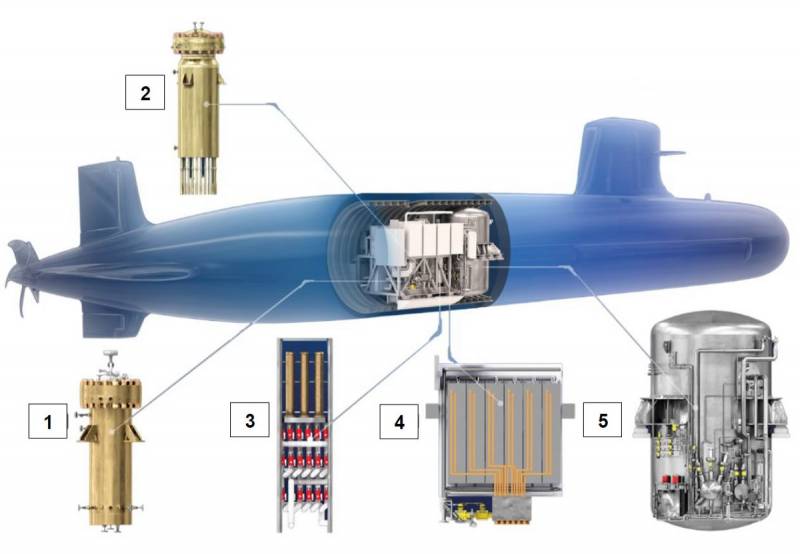 Recently, a controversy has unfolded on the pages of the Military Review about the advantages of new power supplies for electric propulsion of the Japanese DPL Oryu (Dragon Phoenix), the penultimate unit in the Soryu-type submarine series. The reason for the discussion was the admission to fleet self-defense forces eleventh in a row (in a series of twelve ordered submarines) NPL armed with a lithium-ion battery (LIAB).

Against this background, the fact of the creation and pilot operation of an air-independent energy installation (VNEU) of the so-called second stage remained completely unnoticed. The FC2G AIP was developed by engineers and designers of the French naval industrial group Naval Group (NG), the former DCN. Earlier, the same concern was created for the Agosta-90B submarine VNEU of the MESMA type, operating on the basis of a closed-cycle steam turbine. 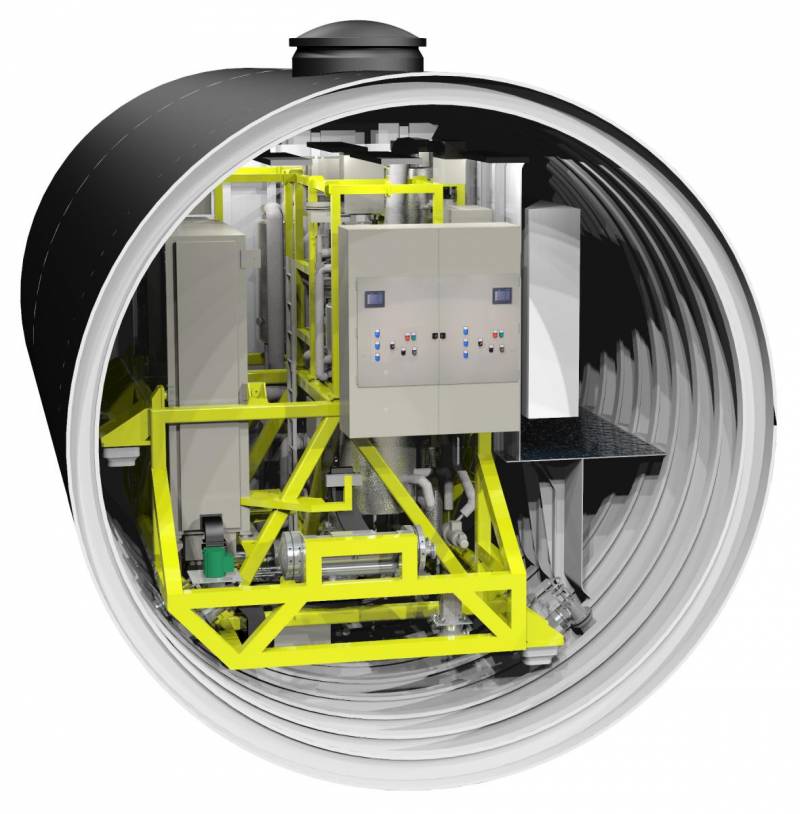 View of the FC2G AIP installation compartment for insertion into the housing during modernization of submarines
It’s logical to ask a question: haven’t there been an attempt to produce hydrogen directly on board a submarine? Answer: undertaken. The reforming of diesel fuel to produce hydrogen, as well as the problem of the direct production of electrical energy from the chemical bonds of the reactants, was dealt with by the Americans and our scientists. But success came to the scientists and engineers of NG. The French engineers managed to create a facility that, by reforming the standard diesel fuel OTTO-2, receives high purity hydrogen to the submarine boat, while German submariners are forced to carry H2 reserves aboard their type 212A boats. 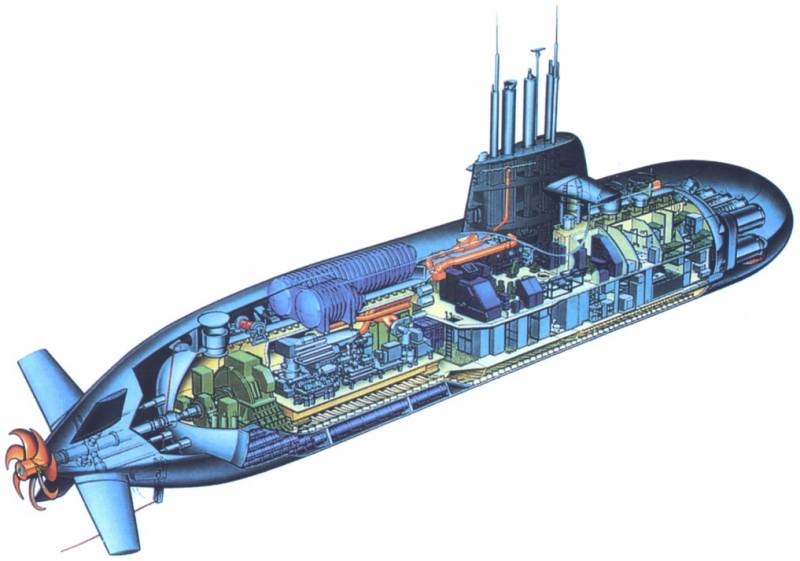 German submarine pr. 212A in the context
The significance of the creation by NG concern of a facility for producing ultrahigh purity hydrogen (purity 99,999%) directly on board the submarine has not yet been fully appreciated by naval experts. The appearance of such an installation is fraught with enormous opportunities for the modernization of existing submarines and the creation of projects for new submarines, to increase the duration of their continuous stay under water without surfacing. The relative cheapness and availability of OTTO-2 fuel in the production of free hydrogen for use in VNEU fuel cells for ECG will allow countries with this technology to significantly advance in improving the performance characteristics of submarines. The development of this type of anaerobic propulsion systems is much more profitable than previously proposed.

1. VNEU on the ECG are twice as quiet as the Stirling engine, because they simply do not have rotating parts of the machine.

2. When using diesel fuel, it is not necessary to carry on board additional containers for storing hydride-containing solutions.

3. The anaerobic propulsion system of the submarine becomes more compact and has a lower thermal trace. All components and systems are assembled in a separate eight-meter compartment, and are not scattered throughout the submarine compartments.

4. The influence of shock-vibration loads on the installation is less critical, which reduces the possibility of its spontaneous ignition, which cannot be said about lithium-ion batteries.

5. Such an installation is cheaper than LIAB.

Some readers may reasonably object: the Spaniards also created an anaerobic plant with bioethanol reforming (BioEtOH) to produce highly purified hydrogen on board. They plan to install such units on their S-80 submarines. The first AIP is planned for installation on the Cosme Garcia submarine in March 2021.

In my opinion, the disadvantage of the Spanish installation is that, in addition to cryogenic oxygen, it is also necessary to place on board the containers for bioethanol, which has a number of drawbacks in comparison with the OTTO-2 single fuel.

1. Bioethanol (industrial alcohol) is 34% less energy intensive than diesel. And the power of the remote control, the cruising range of the submarines, and the storage volumes depend on this.

2. Ethanol is hygroscopic, has increased corrosiveness. And around - "water and iron."

3. When burning 1 liter of bioethanol, the same amount of CO is released2as the amount of fuel burned. Therefore, the "bubble" such an installation will be notable.

4. Bioethanol has an octane number of 105. For this reason, it cannot be poured into the tank of the diesel generator, since detonation will blow the engine into bolts and nuts.

Therefore, it is still preferable to VNEU based on diesel reforming. DPL fuel tanks are very voluminous and in no way depend on the availability of additional containers for technical alcohol for the operation of the “bioethanol” installation. In addition, a single fuel OTTO-2 will always be in abundance at any naval base or home base. It can even be obtained at sea from any ship, which cannot be said about alcohol, albeit technical. And the released volumes (as an option) can be given for the placement of oxygen. And thereby increase the time and range of scuba diving submarines.

One more question: are LIAB needed at all then? Answer: certainly needed! Although they are expensive and very high-tech, they are afraid of mechanical damage, which can be fire hazardous, nevertheless, they are easier, can take any form (conformal), at least 2-4 times (compared with lead-zinc acid batteries) have a larger capacity stored electricity. And this is their main advantage.

But then why such a boat carrying LIAB, some kind of VNEU there?

An anaerobic power plant is needed in order not to "stick out" a diesel engine under water (RDP) device on the sea surface, to give a move or start a diesel generator to charge the battery charge. As soon as this happens, two or three signs unmasking the boat will immediately appear: a breaker on the surface of the water from the RPD mine and the radar / TLV / IR visibility of this retractable device. Yes, and the visual (optical) visibility of the submarine itself, "hanging" under the radar, even from space, will be significant. And if the exhaust gas from a working diesel engine (though through water) is in the atmosphere, then the gas analyzer of the BPA (PLO) aircraft will be able to record the fact of being in the area of ​​the submarine. This has happened more than once.

And further. No matter how quietly a diesel engine or diesel generator works in the submarine compartment, sensitive ears of enemy forces and means can always hear it.

Boats will be able to avoid all these shortcomings when using AB and VNEU together. Therefore, the combined use of VNEU and ultra-high energy storage devices, such as magnesium, silicon-metal or sulfur batteries, in which the capacity is expected to be 5-10 times (!) More than LIAB, will be very promising. And it seems to me that scientists and designers have already taken this circumstance into account when developing new submarine projects.

So, for example, it became known that upon completion of the construction of a series of submarines of the Soryu type, the Japanese will begin to design and R&D for submarines of the next generation. Recently, media reported that it will be a submarine of type 29SS. It will be equipped with a single (all-mode) Stirling engine of improved design and probably a capacious LIAB. And such work in conjunction with American scientists has been underway since 2012. The new engine will have nitrogen as its working fluid, while it was helium in Swedish cars.

Estimated type of submarine type 29SS
Military analysts believe that the new ship in general will retain a very good shape, worked out on submarines of the Soryu type. At the same time, it is planned to significantly reduce the size and give a more streamlined shape to the “sail” (fencing of retractable devices). Horizontal bow rudders will be transferred to the bow on the hull of the boat. This will reduce the hydrodynamic resistance and the level of intrinsic noise when water flows around a submarine’s hull at higher underwater speeds. Will undergo changes and propulsion submarine. The fixed pitch propeller will be replaced by a jet propulsion. According to experts, the armament of the submarine will not undergo significant changes. As before, the boat will have six 533-mm bow torpedo tubes for firing heavy torpedoes (type 89), anti-submarine torpedoes and Sab Harpoon-class cruise missiles, as well as for setting minefields. The total ammunition on board the submarine will be 30-32 units. At the same time, its typical loading (6 new anti-ship missiles, 8 torpedoes of the Type 80 submarine, 8 heavy torpedoes of the Type 89, self-propelled guns of the main engine and electronic warfare) will apparently be saved. In addition, it is assumed that new boats will have active anti-submarine defense (PTZ) means, and possibly air defense systems launched from a torpedo tube.

Work on the creation of a new submarine is planned to be carried out in the following terms: R&D in the period from 2025 to 2028, construction and commissioning of the first submarine building of project 29SS is expected in 2031.

According to foreign experts, the states of the Indian and Pacific Ocean basins will soon need to modernize and upgrade their fleets. Including submarine forces. For the period until 2050, the need for submarines will be about 300 units. To purchase boats that are not equipped with VNEU, none of the potential buyers will be. This is convincingly evidenced by tenders for the acquisition of submarines held by India and Australia. India bought the French Scorpen-type NPLs, and Canbera chose Japanese Soryu-type NPLs for her fleet. And this is no coincidence. Both of these types of boats have VNEU, providing them to be without surfacing under water for up to 2-3 weeks (15-18 days). Japan today has eleven NPLs. South Korea is building its K-III submarine with lithium-ion batteries.

Unfortunately, we cannot yet boast of successes in creating submarines armed with non-nuclear non-volatile propulsion systems. Although work in this direction was carried out, and, it seemed, success was not far off. It is hoped that the specialists of the Central Design Bureau MT Malakhit, the Central Design Bureau MT Rubin, the Federal State Unitary Enterprise Krylovsky SSC, Central Research Institute SET in the near future will nevertheless be able to create a similar or better foreign counterparts to a Russian non-nuclear submarine engine. This will significantly increase the combat readiness of the fleet, strengthen our position in the export of submarines to traditional customers, and help to conquer new markets for the supply of our naval products.