Abrek rebel Mashuko. The beginning of the uprising 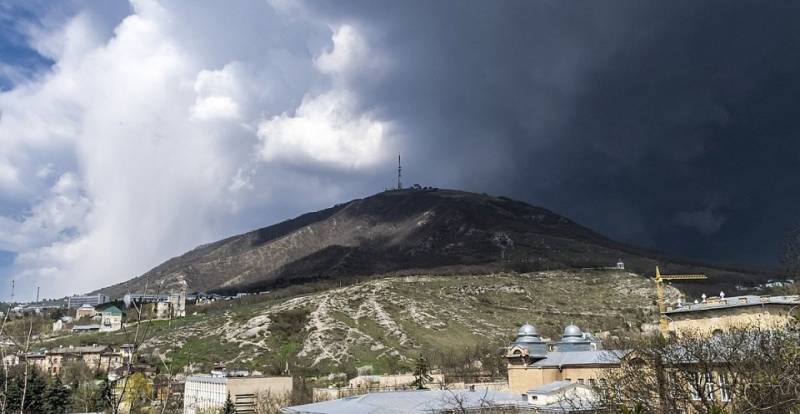 Pyatigorsk is spread between several isolated mountains. The mountain bearing the name Mashuk was compared by Lermontov with a shaggy hat. She will play a tragic role in the life of the great writer and poet. It is on the slope of Mashuk Lermontov that he will be mortally wounded. Mount Mashuk itself is quite modest, its height is about 990 meters, but история the names of the peaks are unusually rich.

There are several versions about the origin of the name of the mountain. Here the myths intertwined about a certain beautiful girl, of course, shedding tears on the slopes of this mountain, about the belonging of this locality to the Mashukov family, since this is a fairly common surname in this land, etc. One can only rarely hear that Mount Mashuk, according to one version, bears its name in memory of a very specific person - the rebel and the abrek Mashuko (Machuk Khubiev). His rebellion against the mountain princes, the local aristocracy and the Crimean-Turkish invaders failed, and he was meanly killed on a mountain road, having been ambushed.

There are several versions of Mashuko’s life. These versions differ not only in facts, but also in historical periods in which these facts were supposed to take place. One version believes that Mashuko raised a rebellion in the early years of the 18th century during the total occupation of Kabarda by the Crimean Khanate, resulting in the Battle of Kanzhal in 1708. This version is very controversial, because most of the nobility of that time, led by Kurgoko Atazhukin, was herself far from pro-Crimean (hence pro-Turkish) views.

According to other, more solid versions, Mashuko rebelled already 12 years after the Battle of Kanzhal, but for the same reasons: the next occupation of Kabarda by the Crimean Khanate and this time the promotion of this occupation by some Kabardian princes. That is why the author will focus on the latest version.

Unrealized results of the Battle of Kanzhal

The defeat of the Crimean-Turkish invaders in the Kanzhal of 1708, although significantly weakened the Crimean Khanate and caused the rise of the popular movement, did not become the liberation of Kabarda from the Turkish yoke. First, the Kabardian leader Kurgoko Atazhukin died in 1709 and did not manage to realize the potential of victory in the battle with the invaders to rally all the princes of Kabarda. Secondly, as soon as he closed his eyes, a deep split among the Kabardians themselves had already begun to brew. 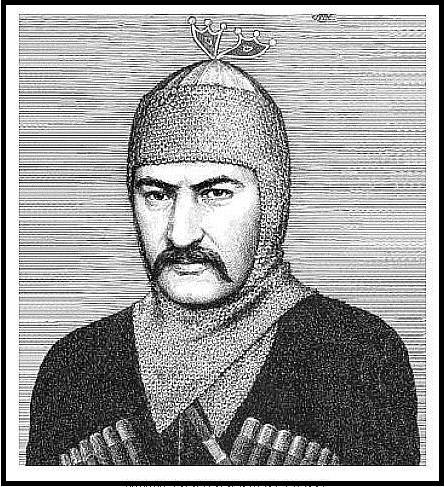 Kurgoko Atazhukin, hero of the Battle of Kanzhal
By 1720, two princely coalitions had been created: pro-Turkish and independent, perceived as pro-Russian. After the next invasion, they received the names of Baksan and Kashhatau (Kashhatav). The Baksan coalition, led by the senior prince (wali) of Kabarda, Islambek Misostov, was in pro-Turkish (i.e. pro-Crimean) positions, fearing revenge from the Crimea and Port. The Kashkhatau coalition was in the minority and decided to continue to uphold the independence of Kabarda, but with a lean towards Russia. This coalition was led by the princes Kaitukins and Bekmurzins.

At the end of 1719 - beginning of 1720, the new Khan of Crimea Saadat Giray, who ascended the throne in 1717, sent a message to Kabarda demanding to end all relations with Russia, return to the power of the Crimea and the Port and continue to pay tribute accordingly including people. Initially, the Kabardian princes refused, despite the views of the pro-Turkish forces.

Saadat began to gather troops, hoping to return the humility of Kabarda, thereby establishing himself on the throne. In the spring of 1720, the 40th army of Saadat Giray, traditionally strengthened by the Nogais and Ottomans, invaded the territory of modern Kuban and moved south to Kabarda. The news of the huge army instantly spread throughout the Caucasus.

Being completely confident in his own victory and heard about a split among the Kabardian princes, the Crimean khan again sent a message to the princes. This time, he demanded not just submission, but also the issuance of 4000 "embers" (prisoners who would become slaves) and compensation for all military trophies that were captured by Kabardians from the Crimeans when the latter tried to return Kabarda to submission. In addition, of course, Kabarda again came under the power of the Crimea and was obliged to pay tribute.

Saadat Giray at the same time showed a political trick. He perfectly understood that the defeat in the Battle of Kanzhal continues to inspire the highlanders to resist, so it was urgently needed to deepen the disconnection among the Kabardians themselves. So, the Crimean Khan declared the head of the Baksan coalition, Islamamb Misostov, the senior prince of Kabarda. Despite the fact that by that time Saadat had wiped out dozens of mountain villages from the face of the earth, Misostov eagerly grabbed this confirmation of his authority. 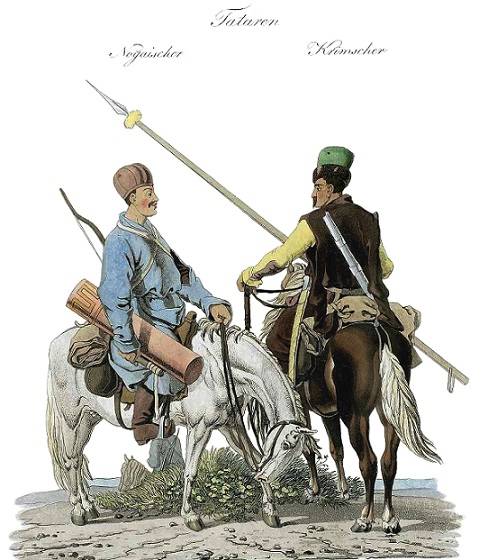 Nogayets and Crimean Tatar
Moreover, the new Vali of Kabarda, Islambek Misostov, having gathered his warriors, joined the Crimean Khan to punish the rebels Kaitukins and Bekmurzins, who were now perceived by them as rebels against his own power. Realizing in advance where the political wind blew, the rebel princes fled with their soldiers to the mountains in the tract Kashhatau, which gave its name to the coalition. At the same time, Misostov lingered for a while in Baksan, and his coalition got its name - Baksanskaya. The situation of political strife was so difficult that the coalitions alternately secretly sent ambassadors to Russia, so various sources still do not have a single answer, which of these parties was truly pro-Russian.

As a result, the foundation was laid not only for the enslaving dependence of Kabarda on the Crimea and the Port, but also for the brutal internal strife. The once powerful princes Kaitukins and Bekmurzins, who controlled half of the Kabardian territory, even began to be referred to as “abregs,” i.e. abreks. But, of course, the princes also had princely princely, so they were considered some outcasts for political reasons, and not robbers from a mountain road.

While the pans are fighting, at the lackeys forelocks crack

Alas, the proverb deduced above is common to all of humanity. The princes who went over to the side of the val Islambek Misostov decided to satisfy the demands of the invaders, naturally, at the expense of their own population. And this concerned not only the property of the highlanders of Kabarda, but also their children, who were to be in orderly lines to actually go to the slave markets in Crimea. In fact, a wave of genocide has begun. Entire villages fell into desolation, someone, without waiting for a “trip” to the Crimea, burned his home and fled to the mountains. 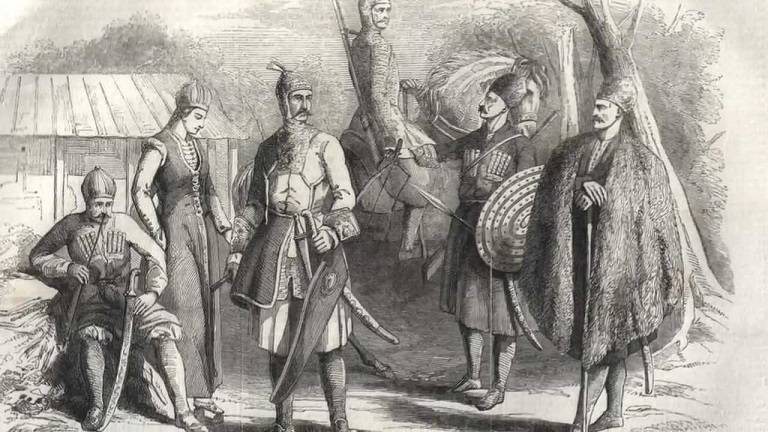 Of course, a major peasant uprising soon broke out. According to the mountain hierarchy of the Northwest Caucasus, the peasants (among the Circassians - tfokotli) were at the very bottom. Slaves could be placed below them, but slaves (unouts) were practically not considered for people - they were just property, which, by the whims of nature, had the skill to reproduce its own kind. In this case, the children of slaves became the same property of the owner as their parents.

From above, peasants were under pressure from almost the rest of society: Valia, the younger princes and the aristocracy, which, in turn, itself had its close associates, endowed with much greater rights than ordinary residents. Thus, under the circumstances, the peasantry had nothing to lose.

At this moment, Mashuk enters the historical arena. The origin of this hero, as befits the Caucasus, is sheltered by many legends and myths. According to one of the first Kabardian historians and philologists Shore Nogmov (“The History of the Adychean people, compiled according to the traditions of the Kabardians”), Mashuk was a simple “serf” from Kabardians.

According to other data cited by historian, philologist and ethnographer Alexander Ibragimovich Musukaev in his works, Mashuk (Mashuko) was an unsurpassed master of weapons. At the same time, he fled to the region of modern Pyatigorsk from Kabardian villages due to blood feud. However, the rebellion does not stop in the end from hiding precisely from blood feud.

There is another version, according to which Mashuk was a Karachai, and his name was Mechuk, which was later transferred to the Kabardian style. And there was Mechuk from the Khubiyev clan. 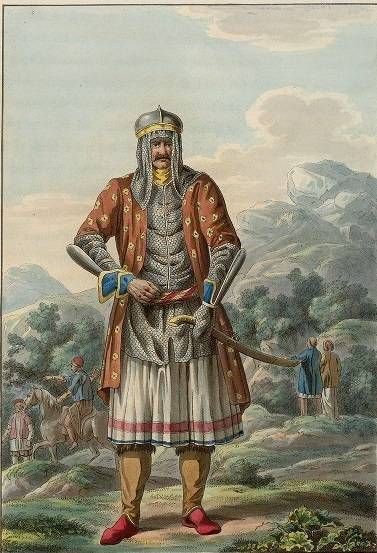 One way or another, but the rebellion of Mashuko took on the character of a forest fire. From under the feet of the nobility they knocked out one of the main sources of income - peasant products and, most importantly, peasant souls. The slave trade was so profitable that it flourished on the Black Sea until the middle of the 19th century, when the Russian Empire burned all the slave trade bases and the slave traders themselves, who periodically drowned alive in the sea, with hot iron.

Of course, the mountain aristocracy first responded to the uprising in a characteristic way for themselves - the destruction of the enemy. However, the Kabardian rebels used the tactics of the Abreks, in fact the guerrilla tactics of sudden rapid raids and the same rapid retreat to pre-prepared paths. In the mountains, which the local population knew like the back of their hand, the role of the number of soldiers of Islamamb Misostov and his Crimean "overlords" was significantly reduced. The uprising continued to grow.