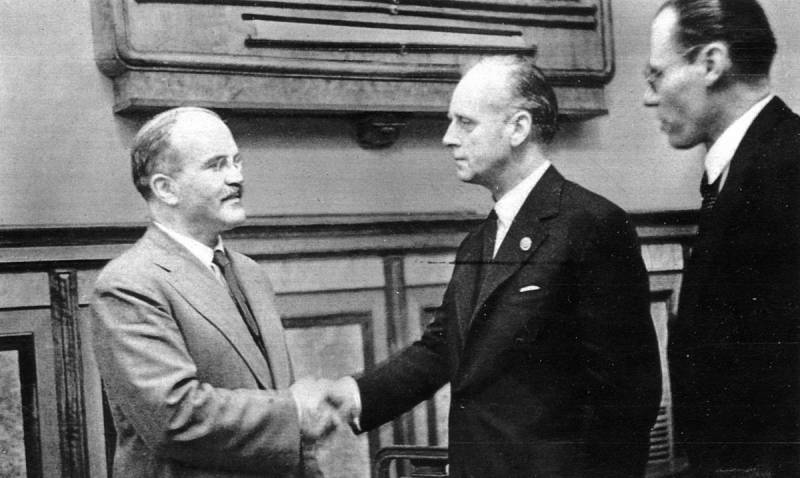 On the 75th anniversary of the Victory in World War II, the TV channelHistory"Conducts a nationwide campaign-competition" I am proud. " Everyone can shoot and send a video to the contest about why he is proud of his great-grandfather, grandfather or someone close to them who participated in the Great Patriotic War. This is a story of a feat that is stored in every Russian family. You can familiarize yourself with the rules of the contest, as well as send your work on the site lagor.rf


Today we recall the summer of 1939, when in Moscow the representatives of England, France and the USSR were in tense negotiations on the possible creation of an anti-Hitler coalition. For the Soviet leadership was a complete surprise statement by Western diplomats that they did not have the authority to conclude any agreement. On August 23, German Foreign Minister Joachim Ribbentrop flew to the capital of the USSR. That same night, the Soviet-German treaty was signed in the Kremlin. The Soviet Union and Germany agreed not to attack each other. Why did Stalin agree with Hitler? What conditions were contained in the secret protocols to the contract? And is it true that the main goal of the Soviet government was to occupy the countries of Eastern Europe?

Top secret
The Soviet-German non-aggression treaty has long been considered one of the most classified documents of the twentieth century. For eighty years no one knew where it is stored. The original contract was not published in print. In the Soviet Union, this document was never officially investigated, and the existence of secret protocols was denied. Only at the end of Gorbachev's perestroika, when the country announced a policy of publicity, the Molotov-Ribbentrop Pact again became the subject of discussion. It was stated that the agreement with Hitler should be considered Stalin's personal decision, and the Soviet people did not bear any responsibility for him. The Molotov-Ribbentrop Pact and its secret protocol were published by the Russian Ministry of Foreign Affairs in May 2019. This treaty, concluded 80 years ago, still affects international relations. Most countries of the Western world, the Baltic states and Eastern Europe consider this document as proof of the guilt of the USSR in starting the Second World War. But is it really so?

The reasons that prompted Stalin to make a deal with Hitler lie in the events that took place in Europe on the eve of World War II. In the 30s of the twentieth century, Soviet-German relations were in a deep crisis. Having come to power, Hitler said that he considers communism to be the main threat to the German people. In Germany, the communist movement was banned, and its participants sent to prisons and camps. The ideologists of Nazism announced the creation of a German racial empire - the Third Reich - which will dominate all of Europe. The core of this state should be the territories of Germany, Austria, Czechoslovakia and Poland. The goals and objectives of the Nazi elite were openly formulated in the program documents of the Nazi party and were never hidden. Although it was precisely the representatives of the left forces who were sharply negative towards Nazism in the countries of Western Europe, the majority of Western politicians still regarded the Soviet Union as the main threat to Europe. Hitler used these moods in his own interests.

In 1936, German troops occupied the demilitarized Rhine region. In March 1938, Hitler annexed Austria to the Reich without firing a shot. Six months later, he demanded that Germany be returned to the Sudetenland region of Czechoslovakia, where the German population lived. Czechoslovakia was bound by mutual assistance treaties with France and the Soviet Union. In the event of an attack by Germany, these countries were to take the side of the Czechs. On September 21, 1938, at the plenum of the League of Nations, the Soviet envoy Litvinov announced that the USSR was ready to help the ally. On the southwestern border of the USSR, troops were put on alert. In the event of a war with Germany, the Soviet leadership asked Poland to let the Red Army through its territory to the Czech border. But Poland refused categorically. At this time, the French and British were already negotiating the inclusion of the Sudetenland in the sphere of influence of Nazi Germany. An agreement on the transfer of these lands was signed on September 30, 1938 in Munich and subsequently received the name "Munich Agreement". As a result, Czechoslovakia lost a third of its territory. Germany received more than half of all Czech coal, zinc and graphite reserves. Czech industry became one of the main pillars of the economy of the Third Reich during the Second World War.

Questions to Poland
An independent Polish republic took an active part in the Czechoslovak section. Back in 1934, Poland was the first European country to sign a non-use of force treaty with Hitler. On the day of the conclusion of the Munich Agreement, with the support of the Germans, the Polish army occupied the Teshin region of Czechoslovakia. At the same time, Hitler had serious territorial claims against the Poles. Poland separated Germany from East Prussia. Hitler sought to reunite these lands. In January 1939, he summoned the Minister of Foreign Affairs of Poland, Jozef Beck, to Berlin and presented him with an ultimatum. Its essence was as follows: the Poles must hand over the free city of Danzig to Germany and provide the possibility of building highways through the so-called “Danzig Corridor” in order to link the territory of Germany divided into two parts. The Poles rejected this ultimatum and thereby actually signed a sentence.

On April 11, 1939, Hitler approved the directive on preparations for the military invasion of Poland. The attack was to begin no later than September 1 of that year. In response, England and France entered into a mutual assistance agreement with Poland. A few days later, negotiations on the Polish crisis began in Moscow. The Soviet side proposed concluding an anti-Hitler Anglo-Franco-Soviet union and signing a military convention. Saving Poland for the USSR was a matter of their own national security. Negotiations on the creation of an anti-Hitler coalition lasted several months, but did not lead to any result. The main obstacle to the conclusion of the anti-Hitler union was the position of Poland. To ensure its protection in the event of war, the Soviet side proposed to let the Red Army through Polish territory to the German border. But the Poles again refused. The German attack on Poland was due to begin in a month, and no agreements were reached with England and France.

Military alliance
Hitler closely followed the negotiations in Moscow. The war with the Soviet Union was not in his immediate plans. On the contrary, for the success of the Polish campaign, he needed to neutralize the potential threat from the East. The very next day after the failure of the Soviet-Polish negotiations - on August 15 - the German ambassador in Moscow, Schulenburg, delivered a message from Berlin to Molotov. Hitler is ready to conclude a military alliance with Stalin. It was a complete surprise. According to the agreement, the parties pledged not to attack each other and not to join military alliances against them. In a secret protocol to the pact, the USSR and Germany agreed on the delineation of areas of interest in Eastern Europe in the event of war. The zone of influence of the USSR included most of the eastern territory of Poland. Estonia, Latvia and Bessarabia were also classified as Soviet interests. The Germans had to maintain control of Western Poland and Lithuania. The agreement, signed within one day, became a worldwide sensation. On August 25, 1939, England and France entered into a military alliance with Poland. But this could not stop Hitler. On September 1, the Germans invaded Poland.

The western regions of Poland were occupied by the Wehrmacht in just 4 weeks. On September 17, the Polish government fled to Romania. The rest of the Polish army was not led by anyone. On September 17, 1939, the Red Army entered the eastern regions of Poland, where Ukrainians and Belarusians lived. In November, the territories where the Belarusian and Ukrainian populations lived were included in the Soviet Union.

In September 1939, the Soviet government conducted intense negotiations with the Baltic republics on the conclusion of a military alliance. On September 28, the USSR and Estonia signed a mutual assistance pact. The parties committed themselves to provide each other with economic and military assistance in the event of an attack by any European power. The Soviet Union received the right to lease Estonian naval bases and airfields. A week later, the USSR concluded similar agreements with Latvia and Lithuania. In all three republics, allied USSR coalition governments were formed, and parliamentary elections were held. The newly elected parliaments proclaimed the creation of the Estonian, Latvian and Lithuanian socialist republics. In early August, they were accepted into the Soviet Union.

Condemning the Molotov-Ribbentrop Pact in words, in fact, many countries of Eastern Europe, having gained independence, continue to use its fruits. In the summer of 1940, the USSR annexed Bessarabia captured by Romania, on the territory of which modern Moldavia subsequently arose. Belarus and Ukraine received vast territories in the West, which to this day are part of these states. A third of its modern territory was annexed to Lithuania, including the capital, the city of Vilnius. At the beginning of the XNUMXst century, EU countries unanimously condemned the Molotov-Ribbentrop Pact as an act of Soviet aggression. However, not one of the new states has ever abandoned the territories acquired through this document.

Ctrl Enter
Noticed a mistake Highlight text and press. Ctrl + Enter
We are
Operation ArgonautFailed blitzkrieg
28 comments
Information
Dear reader, to leave comments on the publication, you must to register.