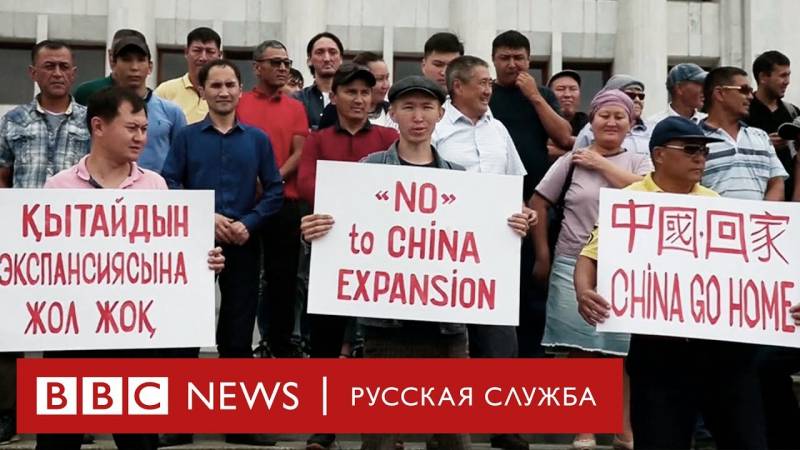 Anti-Chinese shares in the Republic of Kazakhstan in 2019. Source: i.ytimg.com

East is a delicate matter

"Why is Kazakhstan seeking to return to China." This was the name of the material of the major Sohu Internet portal (which is not related to the official position of the Chinese government). It would be more accurate to call sohu.com a blog platform on which almost every Chinese person can publish their views. But, nevertheless, the reaction to such material from Kazakhstan turned out to be quite harsh: on April 8, Chinese Ambassador Zhang Xiao was summoned to the Foreign Ministry to present a note of protest. The comments on the note diplomatically mention the inconsistency of the article with the “eternal” spirit of a comprehensive strategic partnership, reflected in the joint statement of the Republic of Kazakhstan and the People’s Republic of China. The partnership statement was signed by the heads of state on September 11, 2019. And this is all because of an article written by an unprofessional journalist. But it is worth paying tribute to the head of the Republic of Kazakhstan Kassym-Zhomart Tokaev, who did not overly dramatize the situation and bring it to the highest political level. 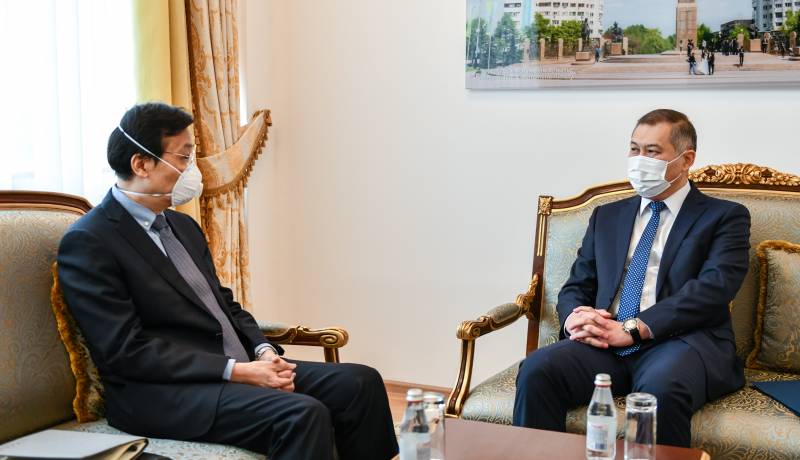 Chinese Ambassador Zhang Xiao (left) in a serious conversation with Kazakh officials. Source: gov.kz
The diplomats of Kazakhstan, obviously, had an opinion on the total control of the entire media sphere by the Communist Party of the PRC, which implies the tacit approval of material on territorial claims. Beijing analyst Sheng Siyu reasonably reproaches the Ministry of Foreign Affairs of Kazakhstan in this regard, pointing out that there is still a certain level of liberalism in the Chinese press. Therefore, do not directly connect the provocative statements with the official policies of Beijing. There is a border officially approved under Nazarbayev, and everything else is just the speculation of journalists who want to cheaply earn fame. Sheng Siyu, besides this, now offers to apologize to the leadership of Kazakhstan for a surge of xenophobia in the country, which the expert has been seeing for many years. It should be noted separately that intolerance of Chinese economic and political influence among Kazakhs is already noticeable even at the international level. So, last fall, in Nur-Sultan, Alma-Ata, Karaganda, Shimkent, Aktobe and Zhanaozen, citizens took to the streets with the slogans "No expansion of China." The main question for the authorities was: “Why is the government intentionally driving residents into financial dependence on such a powerful neighbor, allowing them to build Chinese plants, factories, and power plants in Kazakhstan?” If we touch upon the much less well-off Tajikistan and Kyrgyzstan, then everything is clear - without the Chinese yuan nothing would be built at all. But Kazakhstan is a rich country, and the money of the Middle Kingdom is not entirely appropriate here. This, obviously, is about the 2015 intergovernmental agreement, according to which Beijing is investing about $ 27 billion in the economy of Kazakhstan. 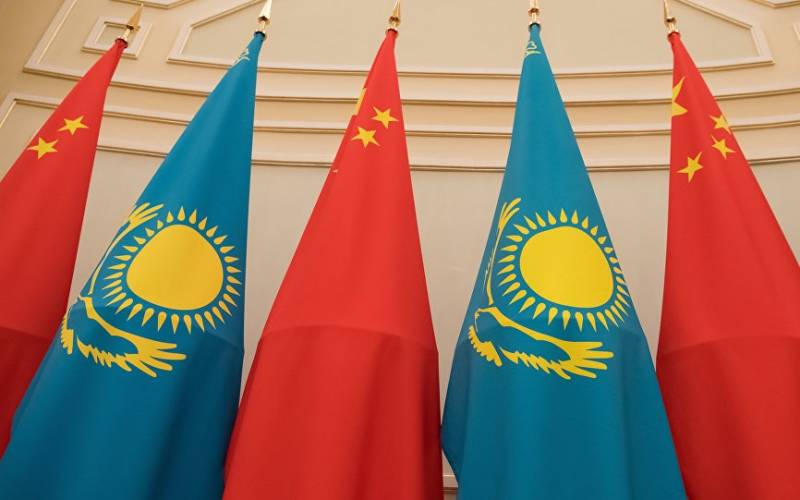 Source: ia-centr.ru
And this is not the first popular speech. In 2016, there was dissatisfaction with land reforms, during which it was allegedly planned to allow the Chinese to buy land. The most interesting thing is that last year’s performance in six cities of Kazakhstan was successfully planned before the official visit of President Kasym-Zhomart Tokayev to Beijing. The influence of certain forces within the republic, dissatisfied with the monopoly of Nur Sultan on the money and resources of China, is obvious. Local bai would be much calmer if the capital allowed the regional elites to work independently with Chinese investors. In the worst traditions of Central Asia, this would be accompanied by bribery, nepotism and bribes. And the ground for the incitement of the population to such performances in Kazakhstan is. Director of the Risk Assessment Group Dosym Satpayev says in this regard:

“Anti-Chinese sentiment is not going anywhere. Moreover, of all the countries of Central Asia, it is precisely in Kazakhstan that anti-Chinese sentiments have deeper roots. And since the national-patriotic mood in Kazakhstan is strengthening, namely, they have traditionally been based on several important promises, one of which is that China is more a threat than an opportunity for Kazakhstan, anti-Chinese sentiments will grow. According to the radical wing of the national patriots, in the future, in addition to economic expansion, China will try to realize its military and political interests in Kazakhstan, as is now the case in Tajikistan. The geopolitical formula "first comes the priest, then the merchant, then the soldier" works. "
Thus, in Kazakhstani society, the impression is made of the concessions made by Nur-Sultan for the sake of good relations with Beijing. And weakness is a bad ally in the East. And here comes an article in Sohu, “Why Kazakhstan Tends to Return to China” ...

Is Kazakhstan a part of China?

Now the reason for such a quick and harsh reaction of the official Nur-Sultan to an insignificant article becomes clear. A heated anti-Chinese audience just give the right reason for excitement. The provocative Sohu was well suited for this role. Hence the note of protest, and the conversation with the ambassador in compliance with all anti-epidemiological conventions. The Ministry of Foreign Affairs of the republic seemed to make it clear to citizens: we noticed, we warned, let them know our tough stance. And around what, in fact, a scandal broke out? It is all a matter of the impenetrable Dzungarian Khanate, which in the XVII-XVIII centuries fought, it seems, with everyone. First with Kazakh tribes, then with China, and often with both at the same time. I must say, they fought well. At a certain point, according to the author of Sohu, the Dzungars from the Kazakhs managed to recapture the territory of Middle Zhuz. At the same time, the Younger and part of the Elder Zhuz of the Kazakhs went to Russia. 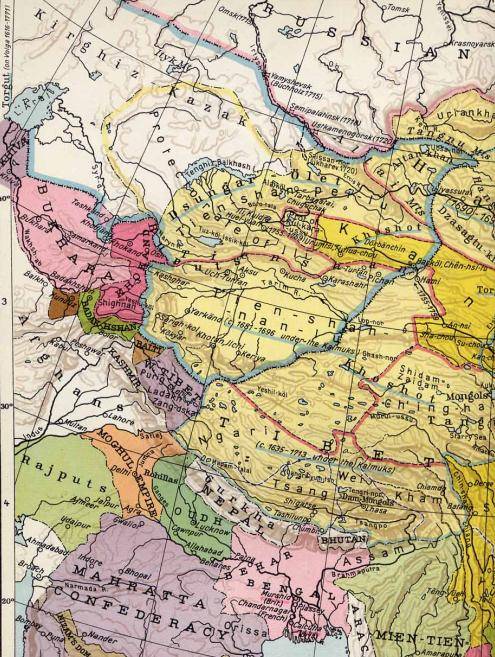 Dzungarian Khanate. Source: wikipedia.org
In 1757, Dzungaria fell before the Chinese Empire, and the territory of the so-called Semirechye near Balkhash passed to Beijing. They even managed to include the new territory in the Xinjiang province, but failed to gain a foothold on it, it was gradually occupied by the Kazakhs. This is precisely the reason why, in the author’s opinion, it is worth thinking about territorial claims against Kazakhstan. In addition, Sohu claims that at least 400 thousand ethnic Chinese live in the territory of the former Soviet republic and that they have long dreamed of returning to the fold of the Celestial Empire. Where the author read it is not specified, but everything is very similar to cheap speculation. The territory is originally ours, occupied by Chinese compatriots - what is not a reason for bloodless annexation? This, of course, if you exaggerate. In fact, the Chinese version of "random" material in the media giant Sohu also has little faith. Moreover, the territorial claims of the Beijing Sea and история their permission has not yet been completed. In addition, censorship in the Middle Kingdom is still at its best, and Sohu is not a seedy Internet resource - after all, the materials of the official state Xinhua are published on its pages. And, as it turned out, such ideas are not born in China for the first time. The Director of the Risk Assessment Group mentioned above, Dosym Satpayev, comments:

“This is not the first time that such provocative materials appear with an emphasis on some unknown historical documents or on pseudo-historical information, where the emphasis is on the fact that at one time part of the Kazakh territory was controlled by China or belonged to China. If such publications appear in the media of a state where traditionally control over the media field is very tight, the question arises: is there a purposeful policy of certain forces in China to create excitement inside China with claims to other countries? If this happens by chance, which is doubtful, then why aren’t tough statements made about this at the level of the country's leadership? One case is a case, the second case is a coincidence, and the third is a trend. ” 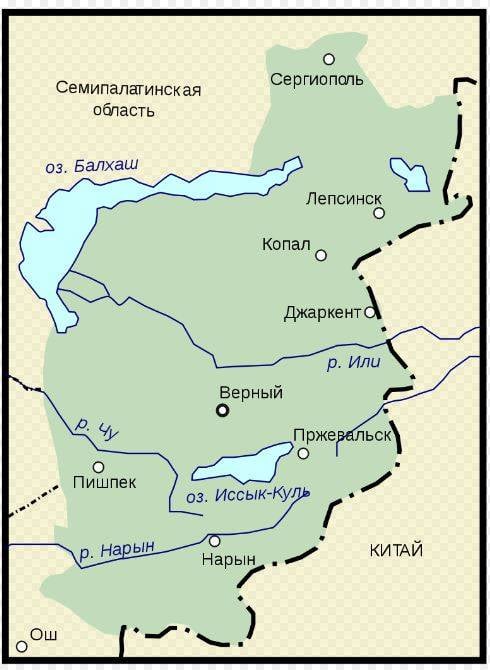 The area of ​​the Seven Rivers, which, according to Sohu, may return to the PRC. Unless, of course, the population will not mind. Source: wikipedia.org
In general, all this is like a kind of intelligence publication with the aim of assessing the mood of a neighboring state, as well as provoking nationalists. At the same time, of course, no one is talking about full-fledged military expansion: China does not need such global mess. Rather, within the country, the influence of supporters of a certain integration of the two countries in the political and economic channels is growing. In the annex to Russia, this is at least worth paying attention to. Firstly, Kazakhstan’s even greater involvement in the Chinese economy is rather negative for us. Just because we cannot afford to invest tens of billions of dollars in a neighboring state, and Beijing can and will demand loyalty for this. And secondly, these scenarios of supposedly restoring imaginary historical justice can be played by China in our Far East.

Ctrl Enter
Noticed a mistake Highlight text and press. Ctrl + Enter
We are
Is Kazakhstan slipping into the anti-Chinese wave?Liao Yiwu: China should fall apart!
285 comments
Information
Dear reader, to leave comments on the publication, you must to register.