Following the minister’s statement: following the T-14 Armata tank, they are trying to send Kurganets and Boomerang to Syria 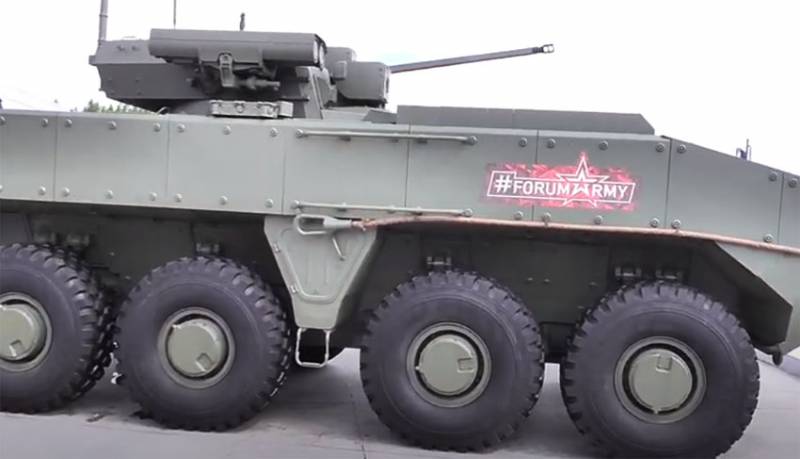 The informational silence, which lasted quite a while over the promising models of armored vehicles for the Russian army and caused, in my opinion, preparations for the military parade on May 9, was suddenly broken. The Minister of Industry and Trade Denis Manturov announced the sending to Syria of promising tanks "Armata" for testing.


The statement by Minister Manturov was puzzled by many experts. Armata in Syria ... There were conversations and rumors about sending other types of military equipment for testing. Why is this happening? Why do rumors continue to multiply?

T-14 Armata will participate in hostilities as a "civilian vehicle"

Most specialists immediately had questions about this. Starting from the simplest, why such a statement is made not by a representative of the Ministry of Defense, but by the Minister of Industry, and ending with a little more complex, which tests can only be carried out in Syria. We will leave the conversations that until the machine is adopted by the Armed Forces of Russia, the civilian ministry is responsible for its creation and passing tests, we will leave it to others.

Throw a new, fairly expensive and secret tank in a civilian crew into battle? How can this be done without the participation of the Ministry of Defense? Tests of the manufacturing plant can give a great head start to soldiers and officers in working on this tank, but they did not participate in real hostilities and their advantages on the battlefield disappear instantly.

It is clear that Denis Manturov, as a high-level government official, will not just throw words into the wind. It is real that several cars are actually delivered to Syria. According to my estimates, this is not more than ten cars maximum. Our BDK simply can not take on board anymore. 10-13 tanks is the maximum, and given the mass of Armata, 10 is not more.

Doubt creeps in from just one. The capabilities of modern intelligence allow the same Americans to control all supplies to Russian bases. As, incidentally, we have supplies for the American. The appearance of "Armata" would have been noticed even during loading and transportation. “We know and keep silent” is not an American principle. And the US military is silent. NATO is silent.

It is very likely that the hype that began in connection with Mansurov's statement is necessary precisely for the Minister of Industry and Trade. It is necessary to stir up interest in this car among potential buyers. And Syria? Syria is a place that is comparable in its climatic and natural conditions to those of potential buyers.

Following Armata, “Kurganets-25” and “Boomerang” can “go to war”

Much more interesting is the fate of other cars, which are also "silent" today. But which are mentioned in a statement by Denis Manturov, published by RIA News:

I can preliminarily say that the Kurganets-25 and Boomerang tests are planned to be completed in 2022.
Many people remember that almost every year the Ministry of Defense of the Russian Federation and the manufacturers of these military vehicles say that “now, literally tomorrow, the day after tomorrow, or at the very least next year”, the army will receive new infantry fighting vehicles and armored personnel carriers. Naturally, there has already been talk about the fact that samples of these machines will also be sent for testing in Syria.

I must admit that this is not the first campaign "to send to Syria" such armored vehicles. The first time these cars were "seen" there exactly a year ago, at the end of March and the beginning of April 2019. It was then that the Russian media, with reference to the fighters of the Syrian army and pro-government activists, spread information about the alleged participation of these infantry fighting vehicles and armored personnel carriers almost in the fighting. True, the news came out on April 1, which added "intrigue". Confirmation, of course, no.

By the way, then almost none of their journalists had the simplest question about the competence of these same fighters and activists. Ask the Russian army officer now what he knows about the promising developments of the same Americans, Israelis, French, Germans, Chinese? It is unlikely that you will get a clear answer even about the appearance of promising cars. And the Syrian soldiers possess such information ...

Talk that the Kurganets and Boomerang will be tested in Syria arose simply after the statement of Manturov. To experience so to experience. All at once ... By inertia ...

And there are no official confirmations.

War as the most effective way to compete

Indeed, the costs of designing, manufacturing and testing combat vehicles are enormous. Producers today must not only produce, but also earn. That is, it is necessary to convince potential buyers that the purchase of products of this particular manufacturer will give the buyer advantages in the military field over potential opponents.

Competition at the “dispute on paper” level is not effective. The participation of products in hostilities is another matter. Agree, even today it is stupid to advertise a Kalashnikov assault rifle. How stupid it is to advertise "Grad" or "Tornado". It was participation in hostilities that served as the best advertisement for a fairly large number of types of weapons and military equipment.

The fate of well-known modern Russian products is very indicative for understanding the situation on the arms market. How interesting our S-400 complex became to foreigners after Turkey bought them. This is even without the direct participation of the complex in hostilities! How afraid the pilots are to enter the area controlled by the S-400.

And another Su-57 aircraft complex. Even flights in the sky of Syria, confirmed by the Russian Ministry of Defense, even a “meeting” with American planes in the same sky, did not lead to an increase in buyers' interest in this aircraft. By the way, all of the above can be attributed to "Armata".

The coronavirus pandemic in the world has hit the economies of many countries quite strongly. Affected the military industry. If before the defense industry enterprises could afford to produce some kind of products for quite a long time, thanks to long-term contracts with their own armed forces, today the situation has changed.

And it has changed dramatically. Products became expensive and the Ministry of Defense can no longer purchase immediately and a lot. Manufacturers are forced to look for buyers "on the side." So, today in military production the same mechanisms are included that operate in the production of civilian products.

Ctrl Enter
Noticed a mistake Highlight text and press. Ctrl + Enter
We are
Bear wakes up: Modernization of Russian armored vehiclesSituational analysis of the death of the MH17 flight (Malaysian Boeing 777), made on the basis of engineering analysis from 15.08.2014
63 comments
Ad