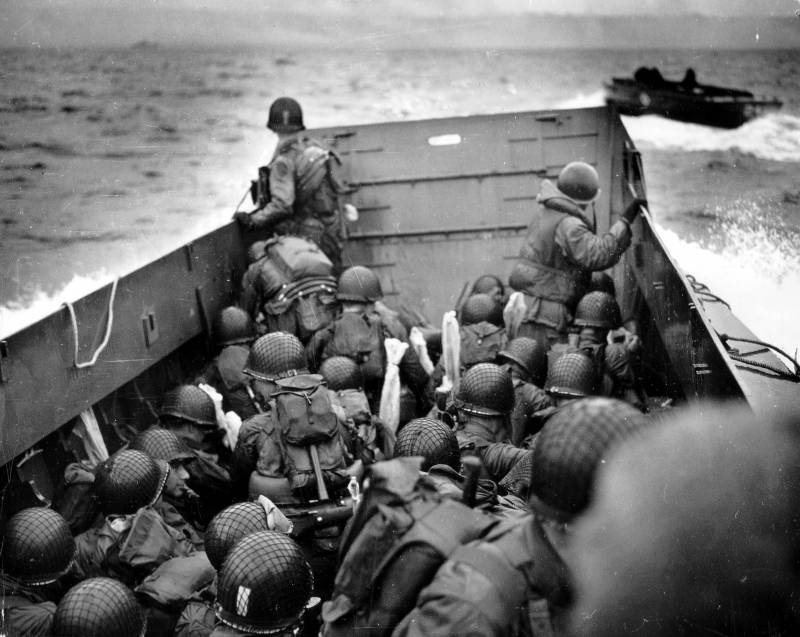 In the United States, they seriously thought about creating a new landing craft. The new development in the American press is already called the Higgins boat of the XXI century. The famous LCVP landing craft and its closest relatives, created after World War II, no longer fully suit the US military. The design of the new landing ship was designated SHARC (Small High-Speed ​​Amphibious Role-Variant Craft). Unlike all its predecessors, the possibility of remote control and fully autonomous operation should be realized on the new landing boat.

An LCVP landing craft, also known as a Higgins boat, is the most famous landing craft in stories. And it's not even that the boat was built in a huge series. These boats were actively used by the Americans during major landing operations of World War II. They are familiar to many by the frames of photo and newsreels from the beaches of Normandy or Iwo Jima. In the future, boats more than once appeared on screens in feature films and often appeared in computer games. One of the most famous examples from the cinema is Steven Spielberg’s film “Saving Private Ryan”.

LCVP (Landing Craft, Vehicle and Personnel - a landing craft of personnel and equipment) was the most massive type of landing boats that were used by the U.S. military to transport landing ships to the coast of the Marine Corps and various weapons and cargoes. The boat could be used to land on an unequipped coast. LCVPs were widely used in the landing operations of World War II, including for landing conventional infantry units on shore. Boats were released in a huge series. For the U.S. Navy alone, over 15 years, 22 units were produced. At the same time, during the war years, 492 more of these boats were built and transferred to the Allies under the Lend-Lease program. 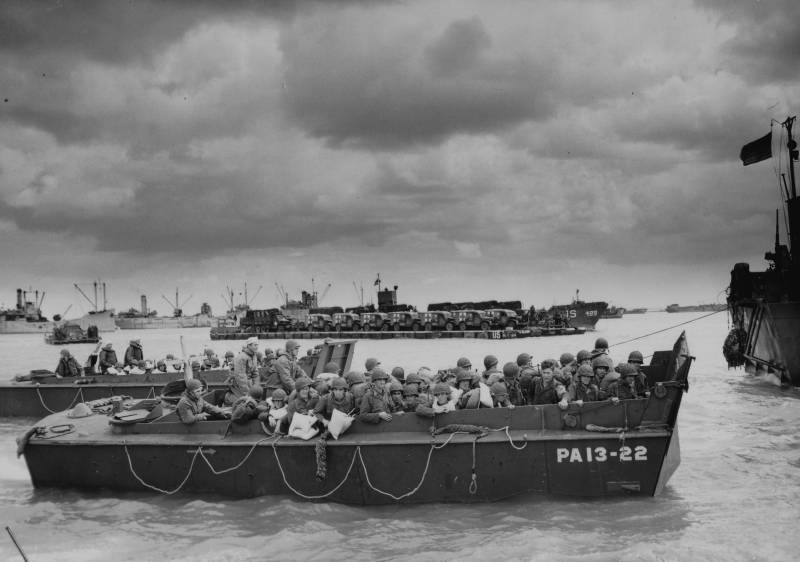 US troops in the Utah landing zone. In the foreground boat LCVP, photo: waralbum.ru
The landing boat was created by the designer and engineer Andrew Higgins, so he also went down in history under the designation Higgins boat, or Higgins boat. Initially, the designer relied on exclusively civilian use of his products. The project was commercial and was created for operation in shallow water and marshland. It was planned to use the boat in Louisiana, including for the exploration of oil fields, but the war made adjustments, and Higgins quickly converted the project to the needs of the army and fleet.

A distinctive feature of all LCVP boats was the nose ramp, which simplified the process of landing on any coast. The same technical solution seriously simplified the process of loading equipment and cargo on board the boat. In one voyage, a Higgins boat could bring ashore up to 36 soldiers (full platoon) or up to 3,7 tons of various cargoes, or a small army off-road vehicle. The crew of the boat could consist of three people, including two shooters who could support the landing with fire from large-caliber 12,7 mm M2 machine guns. Maximum speed - 9 knots (up to 17 km / h).

After the end of World War II, the operation of LCVP boats continued. At the same time, a whole family of structurally similar amphibious assault weapons, but increased in size, was created in the United States. For example, even during the war years, construction began on the LCM-6 landing craft, which surpassed the LCVP in all respects. These ships could deliver ashore up to 60 paratroopers or up to 34,5 tons of various cargoes, including one medium tank "Sherman".

Already after the war, the LCM-8 version appeared, featuring a large displacement and even more increased carrying capacity. The speed of such boats without cargo increased to 12 knots, and the carrying capacity - up to 60 tons. Such a boat could easily transport ashore up to 200 soldiers, or new Tanks: M48 medium tank or M60 main battle tank. 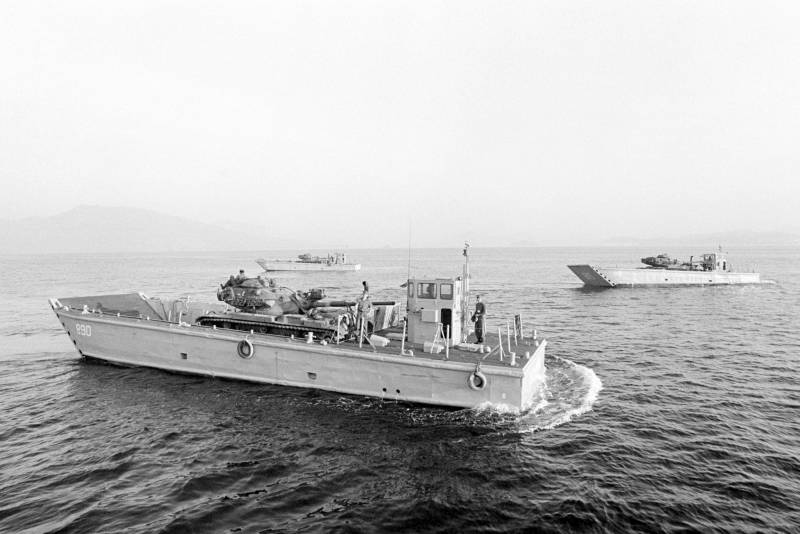 LCM-8 landing boats carry M60 tanks
At the same time, by the beginning of the XNUMXst century, these ships had become outdated. They are a pretty easy target for any modern weapons, not just rocket. The disadvantages of such amphibious assault include their low speed, as well as the need for a crew, which on boats LCM-6 and LCM-8 consisted of 5 and 4 people, respectively. At the same time, the boats are not the smallest in size, especially the LCM-8, which could be used to transfer tanks to the landing zone. Both the LCVP and LCM-8 in the USA are actively preparing a replacement.

The Navy and the US Marine Corps are ready to return to the arena relatively small landing craft, but at a new round of technological development. In the XNUMXst century, landing operations became even more risky than during the Second World War. Developed countries have acquired numerous high-precision weapons. For example, Russia and the PRC have good coastal defense equipment, including modern missile systems capable of hitting any landing ship still on the approach to the coast.

The problem for the American army is that the weaker armies of the world, and even individual armed groups, for example, Hezbollah, received guided missile weapons. So the likelihood that the enemy will hit landing ships even at a distance of 50 or 100 miles from the coast has increased significantly. At the same time, it is not possible to solve the problem only at the expense of modern amphibious vehicles. Yes, they are small in size and have a good level of protection against small arms fire and fragments of shells and mines, but they can’t be used in case of serious unrest at sea and are not able to make long distances. Amphibious armored personnel carriers still have to be planted as close to the shore as possible and at a low wave height.

That is why the fleet and the Marine Corps need small vessels that can deliver infantry, light weapons and military equipment to the shore, operating in the landing zone. First of all, a new landing vehicle is necessary for the delivery of troops, small-sized ground vehicles, light weapons systems, fuel, electrical equipment, ammunition, drinking water, provisions, etc. 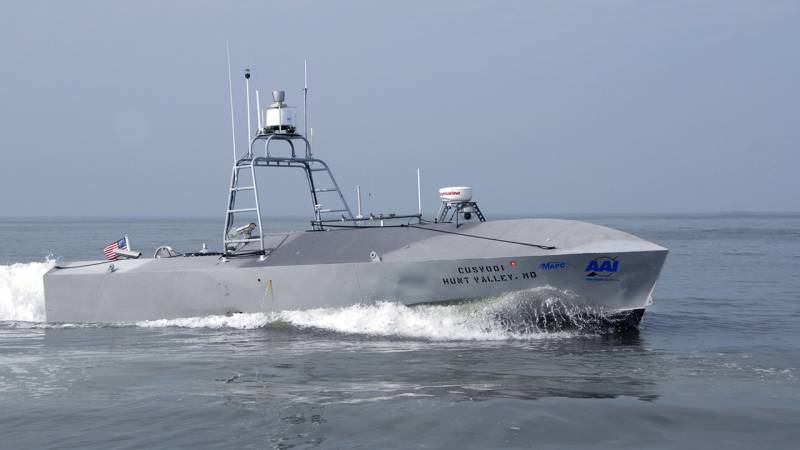 U.S. drone tests
As a possible variant of the new landing ship, which is already called the Higgins boat of the XXI century, in the United States consider the project, known as SHARC (Small High-Speed ​​Amphibious Role-Variant Craft). According to The National Interest, a new high-speed vessel should deliver troops and property ashore at a speed of at least 25 knots (46 km / h). In this case, the ship should carry ashore up to 5 tons of payloads, and the maximum range should be 200 nautical miles (370 km). Some approximate dimensions of the future vessel are also known: the deck length is 13 feet (4 meters), the ramp width in the narrowest place is 5 feet (1,5 meters), and draft is 30 inches (0,76 meters).

An important feature of the new small high-speed amphibious assault should be the ability to work without a crew completely offline or in remote control mode, when the movement of the vessel will be controlled from the side of a large landing ship or from the shore. It is obvious that the fleet and marines will only be equipped with robotic boats, since they expect to get a modern tool that meets the challenges of today. At the same time, the landing craft itself must be modular so that it can easily be used for different missions. For example, the possibility of presenting such a landing boat as a platform for accommodating various weapons or unmanned aerial vehicles (both air and underwater) is being considered.

We are in Yandex Zen
Landing without ships. Navy is not able to conduct large-scale amphibious operations
Development of landing craft from ship to shore
31 comment
Information
Dear reader, to leave comments on the publication, you must to register.