Marker project: the robot is preparing for new tests 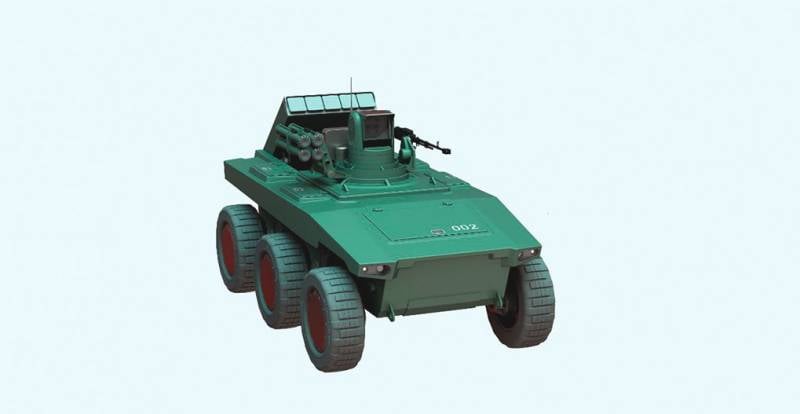 Since 2018, the National Center for the Development of Technologies and Basic Elements of Robotics of the Foundation for Advanced Research and the Android Technology company have been working on the Marker experimental platform. Last year, this development was first presented to the public, and recently the new details of the work carried out and plans for the future became known.

On April 21, TASS published an interview with the head of the Scientific and Technical Council and the Deputy General Director of the FPI Vitaly Davydov. The topic of conversation was new developments in the field of robotics - including experimental robotic platform "Marker".

The representative of the FPI recalled the objectives of the project. Using the "Marker", technologies are being developed to create and use promising military-oriented RTKs. Methods of independent work and interaction with people, other robots or weapons and military equipment are being developed. During these processes, specific technical solutions are checked in all major areas. The best ideas are selected and developed. 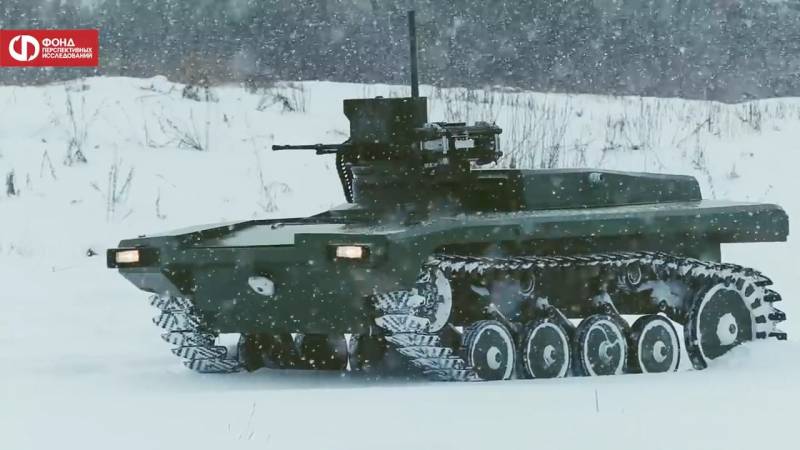 The ultimate goal of the Marker pilot project is to create a fully autonomous RTK capable of independently performing a wide range of activities. The operator will be able to set a task, and the robot will decide all other issues independently - to build a route, search for a target and use weapons.

At the same time, Marker remains a pilot project for working out specific solutions. For this, the platform has an open architecture that allows you to implement and test various devices and components of domestic development.

The project implements not only autonomy, but also a teleoperator mode. It can be useful when performing certain tasks, for example, when clearing mines or carrying out work in conditions dangerous to humans. Moreover, as noted by V. Davydov, telecontrol is a completed stage - now all attention is focused on more complex developments. 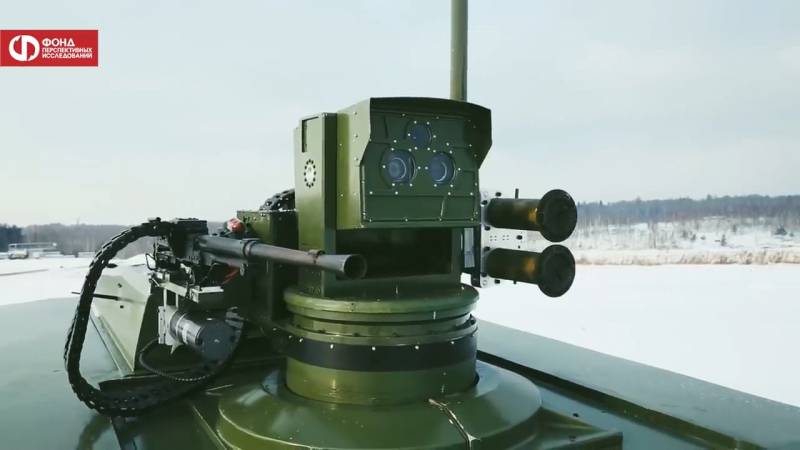 At the time of the first demonstration to the general public, Marker RTC could independently build routes, go to the indicated points and fire. Research and design work is ongoing, which is already leading to new results.

According to V. Davydov, the complex has already "mastered" the use of small arms weapons. With its help, it independently affects both ground and air targets. In the near future should begin testing a new complex of weapons, including grenade launchers. This will expand the range of combat missions.

In the near future, the Marker RTC will include unmanned aerial vehicles. With their help, it is proposed to carry out reconnaissance and increase situational awareness, as well as to strike at some targets. It is possible to use both UAVs and so-called. barrage of ammunition. 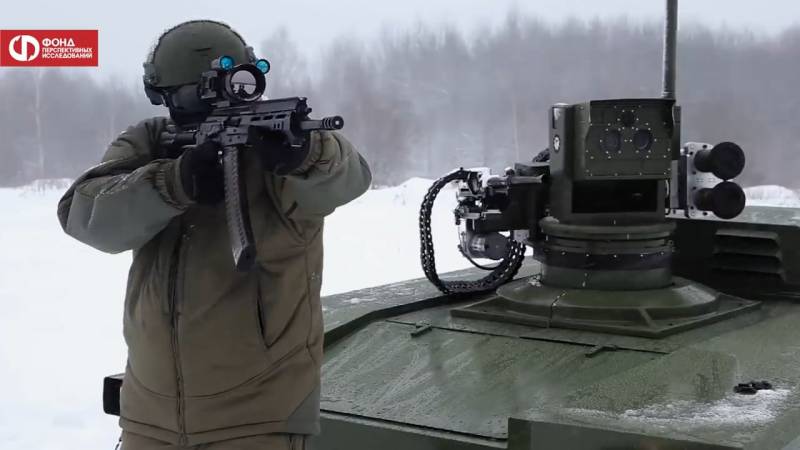 Any operations with weapons should be carried out under the control of the commander, depending on the existing conditions and assigned tasks. There are several options for the use of technology. The first provides for autonomous work in a given area. In the second case, the robot must support the unit and receive specific tasks from its commander.

Work on the experimental platform "Marker" is planned to be completed next year. By this time, several experimental machines will be built to demonstrate the capabilities of the platform and its basic solutions. However, the main result of the project will be a set of the most successful and effective technologies suitable for use in promising projects.

According to V. Davydov, in the near future a full-fledged demonstration RTK will appear. It will include five robotic platforms with different equipment. Prototypes will carry machine-gun and grenade launchers, as well as devices for launching UAVs and barrage ammunition. Such a composition of the RTK will allow us to show all the capabilities of the technology obtained through promising ideas and solutions. 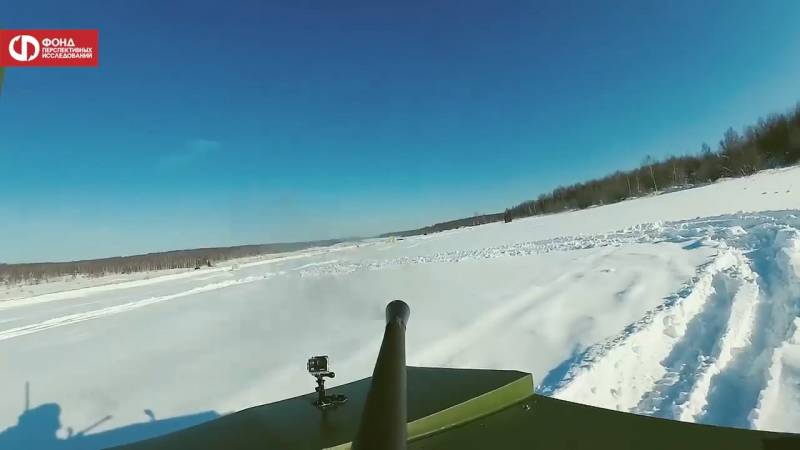 How soon similar equipment can get into the troops, the FPI leadership does not say. The objective of the Fund and related enterprises is to develop technologies and create experimental models. The development of equipment for full operation should be carried out by a separate order of the Ministry of Defense, the Ministry of Internal Affairs or other structures.

The first messages about the Marker program appeared at the beginning of last year. Since then, FPI and Android Technology have repeatedly talked about current work and even published a video of testing equipment at the training ground. For testing, built two experimental platforms with different target equipment. In the near future should appear three more products with a different payload.

The Marker robotic platform is a medium-sized tracked vehicle equipped with a set of electronic equipment and having a seat for the target load. The possibility of building a wheeled vehicle with the same equipment and the same capabilities is claimed. The structure of the robotic complex includes several platforms with different equipment, an operator console and other components.

The platform integrates remote control, autopilot, computer system, vision system, etc. The composition of the equipment may vary to conduct certain studies. So, in the current tests, platforms with a machine-gun-grenade launcher module and with a device for launching an UAV are involved. 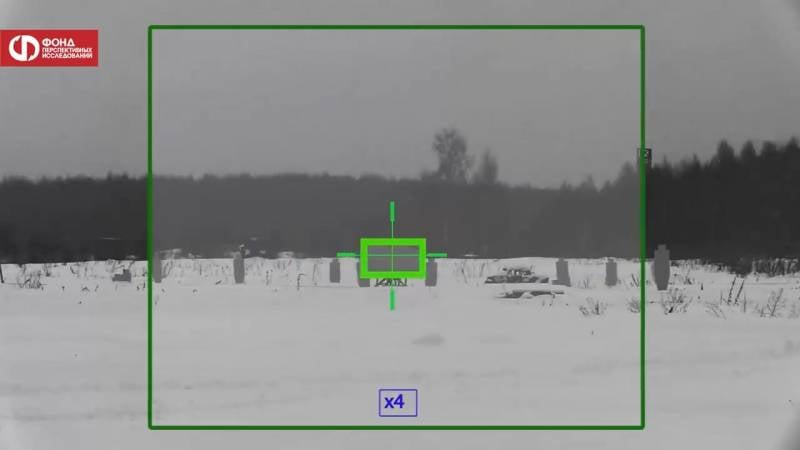 At the end of July last year, it was reported that the Marker successfully passed sea trials. Machines have shown their ability to independently build a route to a given point and overcome it. In the near future it was planned to begin fire tests. In October, FPI and Android Technology were again shown at the training ground.

At the end of November, the FPI announced that in the first half of 2020, test firing with autonomous operation should begin. Then it became known that in the future two prototypes on a wheeled chassis will join two tracked platforms.

As the developers have repeatedly mentioned, the goal of the current Marker program is to create a set of technologies and solutions for the further development of promising RTKs. While they are being worked out with the help of experimental platforms. In the future, if there is interest from a potential customer, the development of full-fledged combat systems is possible. 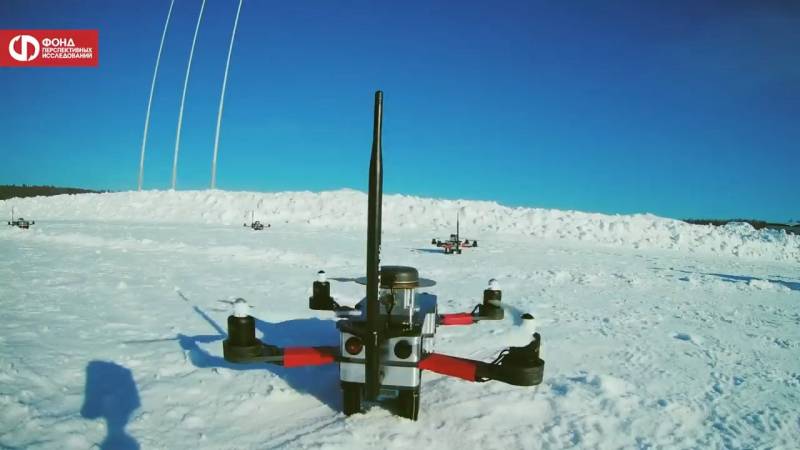 An order for such equipment may appear in the very near future. Work on the new project will take several years, after which the Russian army will be able to get a fundamentally new model of equipment. Unlike a number of existing RTKs, promising systems based on operating time according to Marker will be able to work not only according to operator’s commands, but also independently.

Thanks to this, a mechanical "fighter" will appear in the various divisions, capable of helping living soldiers or replacing them. In this case, the interaction of man and the RTK will be as simple and convenient as possible, in accordance with the requirements of use on the battlefield.

However, autonomous RTKs of new types will appear in the army no earlier than in a few years. In the meantime, the main task in this direction is to continue the development and testing of existing experimental systems, such as the Marker platform. In the very near future, its developers will begin a new phase of testing, and then the appearance of new experimental equipment is expected. The "Marker" in its current form will not get into the troops, but will open the way for other equipment with the same or improved capabilities.

Ctrl Enter
Noticed a mistake Highlight text and press. Ctrl + Enter
We are
Fighting robots in future wars: expert conclusionsSoldiers to order
16 comments
Information
Dear reader, to leave comments on the publication, you must to register.