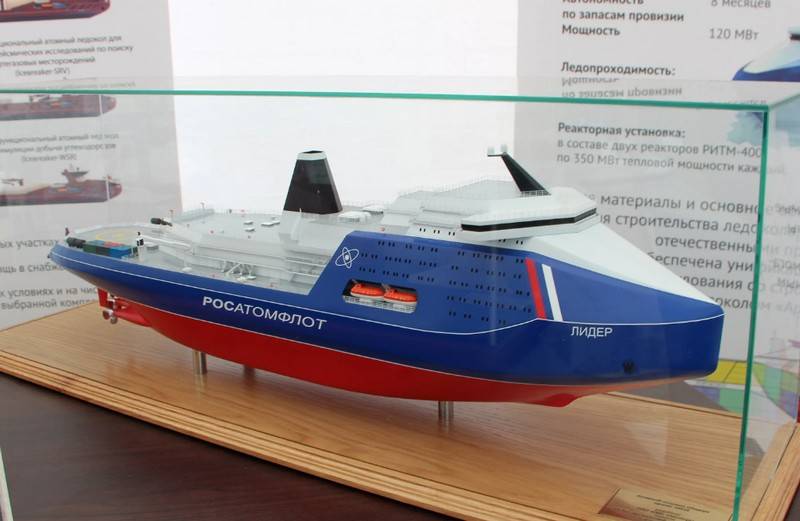 The contract for the construction of the atomic icebreaker "Leader" will be signed before the end of April, all disagreements between the parties have been removed. It is reported "Businessman".


According to the publication, the Far Eastern shipyard Zvezda and the state corporation Rosatom are ready to sign a contract for the construction of the lead nuclear icebreaker of the new generation project 10510 code "Leader", all parameters are agreed. The parties declare their desire to sign the agreement by the end of April, however, the coronavirus pandemic interferes with physical signing. Currently, various options for meeting representatives of the parties located in different parts of our country are being considered. After signing the contract, the ship will be laid, delivery of the icebreaker to the customer is scheduled for 2027.

As previously reported, in total it is planned to build three icebreakers of the new project. In January of this year, the Russian government allocated 2020 billion rubles from the federal budget for the construction of the lead icebreaker from 2027 to 127,576979. Funds have not yet been found for the construction of two other icebreakers of the series, but there is still time, their laying is scheduled for 2023.

As the developers of the project from the St. Petersburg Iceberg Central Design Bureau stated, the Leader icebreaker will be able to reach speeds of up to 24 knots in clean water and up to 12 knots on ice up to 2 meters thick. The maximum overcome ice thickness is 4 meters. The service life of such an icebreaker is designed for 40 years. The crew is 127 people. The autonomy of the icebreaker in terms of provisions will be 8 months.
Ctrl Enter
Noticed a mistake Highlight text and press. Ctrl + Enter
We are
The government allocated funds for the construction of the leading icebreaker "Leader"Laid the keel of the first Soviet-era icebreaker with a capacity of 25 megawatts
58 comments
Information
Dear reader, to leave comments on the publication, you must to register.