Cars in Lend-Lease. Benefits and Benefits 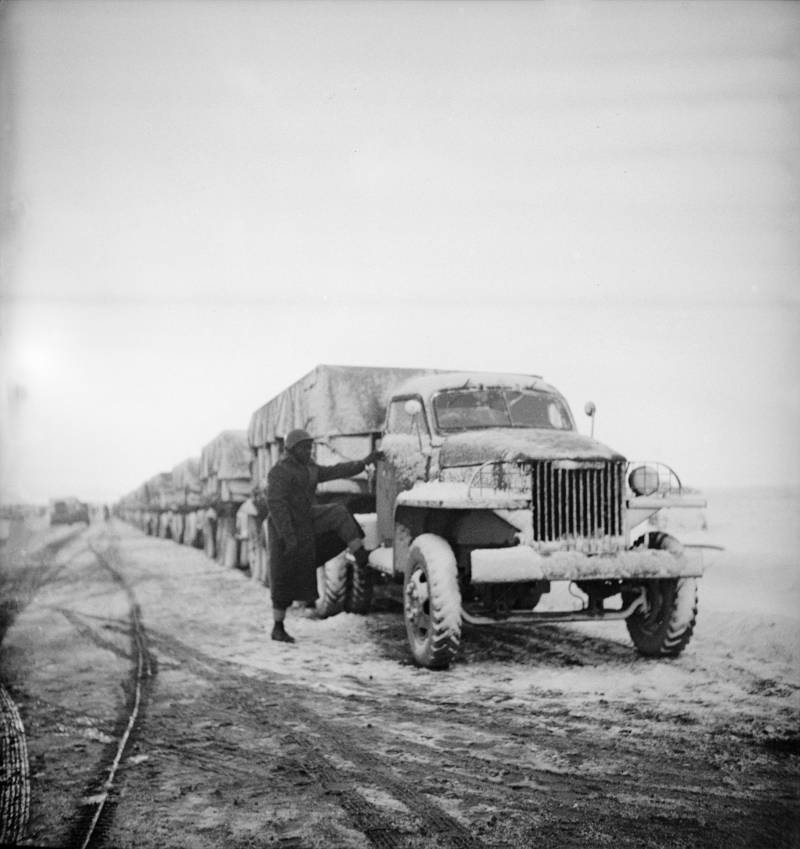 Studebaker US6 trucks in the Iranian mountains, March 1943. Photo by Wikimedia Commons

In the fall of 1941, the USSR received the first American cargo sent under the Lend-Lease program. Such deliveries continued until the very end of the war and covered many areas. So, among the various equipment, the bulk were cars, primarily trucks. Consider the features of the supply of automotive equipment.

According to directories of the Institute of Military stories The Ministry of Defense of Russia, on June 22, 1941, the Red Army had at its disposal more than 281 thousand vehicles of all available types, mainly trucks. With such a fleet, distributed throughout the country, had to start a war. In the first two months of the war, more than 206 thousand cars of various types were withdrawn from the national economy, which made it possible to strengthen army logistics - at the cost of worsening the situation in the rear.

During the Great Patriotic War, all major automotive plants continued to work, rebuilding production to current needs. Mostly trucks left the conveyors, and cars of some models were also produced. Some car factories have mastered the production of armored vehicles or weapons. From the beginning of the war until the end of 1945, the Soviet automobile industry surrendered more than 266 thousand units of automotive equipment. 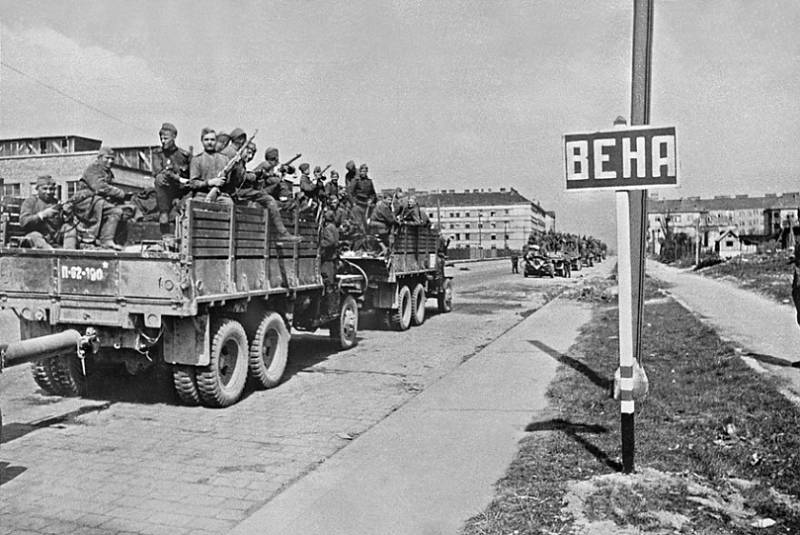 Studebaker column in liberated Vienna. Wikimedia Commons Photos
Cars were of particular importance, and therefore quickly took the appropriate place in orders for deliveries under the Lend-Lease. Fast enough, trucks, tractors and jeeps became the main equipment in the supply. According to the postwar report of the US military, during the war in the USSR they sent approx. 434 thousand American cars. More than 5,2 thousand units were supplied by Great Britain.

The American and British auto industry offered a wide selection of products, and the Red Army seized the opportunity. A variety of samples were studied and ordered; the most successful and convenient became the subject of new orders. Hundreds of models were sent to the USSR from 26 automobile companies. Some samples were purchased by tens of thousands, others - only by tens. 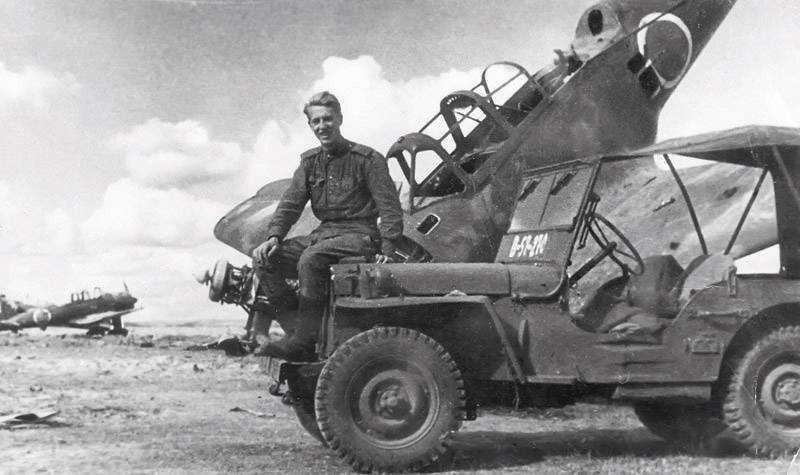 "Willis" in Manchuria, summer 1945. Photo by Mirtransporta.ru
Most of the cars arrived in a dismantled state or in the form of car kits. Assembly and preparation for operation was carried out at specially constructed enterprises in Iran and at Soviet plants. For example, the Gorky Automobile Plant in 1941-46. collected about 50 thousand imported cars - in parallel with the production of its own equipment.

Deliveries of land-leasing cars made it possible to quickly recover losses in equipment, re-equip parts at the front and restore logistics in the national economy. As supplies under Lend-Lease continued, the share of imported equipment gradually increased. According to various estimates, in some periods up to 30-32 percent. The Red Army fleet consisted of American and British cars.

The most massive foreign car in the Red Army was the 2,5-ton three-axle truck Studebaker US6. Our country has received more than 150 thousand of such machines, both in finished form and in the form of car kits. Such trucks, previously rejected by the US Army, showed themselves well in the Red Army, which contributed to the emergence of new orders. US6 found application in both transportation and combat. A significant part of domestic jet mortars was built on such a chassis. 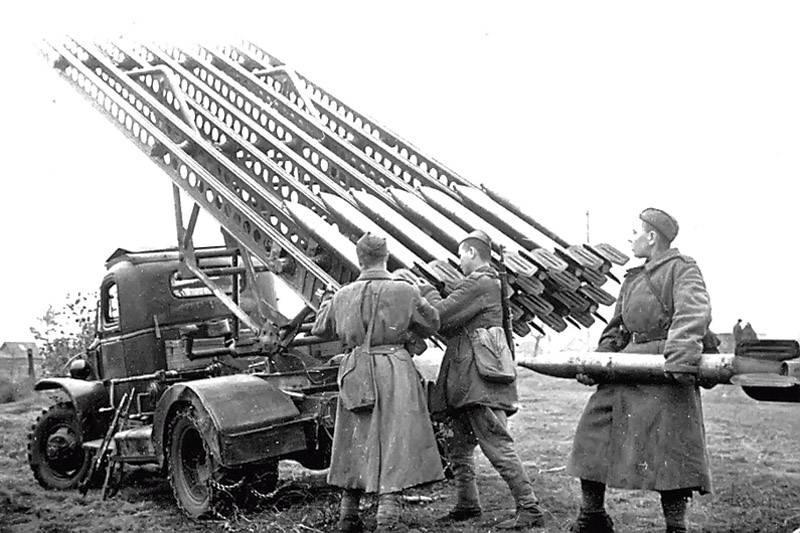 Guards jet mortar on the Chevrolet G7107 chassis. Photo Mirtransporta.ru
In 1942-43 deliveries of the Chevrolet G7100 series trucks have begun. Until the end of the war, more than 60 thousand such vehicles were shipped, of which approx. 48 thousand arrived in the USSR. American "one and a half" became a useful addition to the domestic technology of this class and found application in various fields. G7100 were delivered in the form of trucks and special equipment. Our experts also conducted experiments on the re-equipment of the cars received.

During the war years, GMC manufactured more than 560 thousand CCKW trucks of several modifications. Of these, only 8,7 thousand were sent to the USSR. One of the reasons for such a small supply volume was the availability of a more convenient alternative from Studebaker. You can also note 2,5 tons of cars from International Harvester. For the same reasons, the Red Army acquired only 4,3 thousand of such equipment.

Massive, but unsuccessful turned out to be a commercial two-ton truck Dodge WF-32. In 1942-43 The USSR managed to acquire approx. 9,5 thousand of these machines. The undercarriage of the civilian car was unsuitable for army loads. Due to constant breakdowns and problems with maintenance, the army refused to further purchase such equipment. In the event of failure, the existing machines were replaced by others. 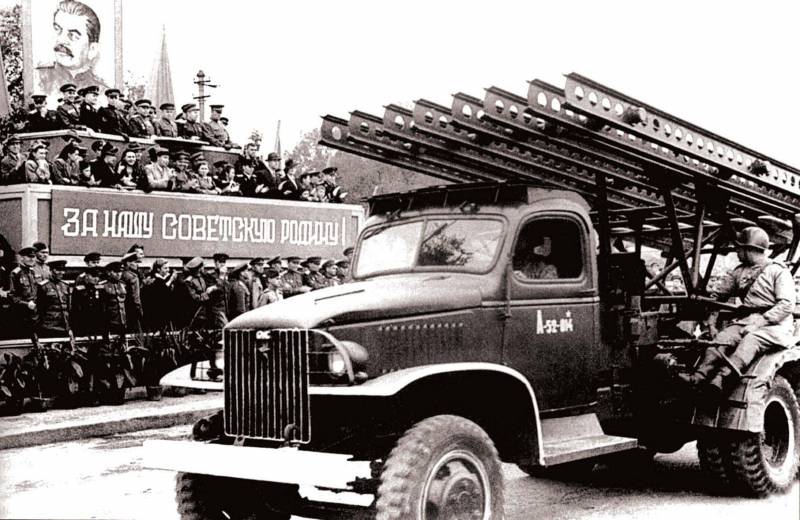 GMC CCKW as a mortar. Photo Kolesa.ru
In the context of automobile lend-lease, one cannot fail to mention the legendary Willys MB. Deliveries of such cross-country vehicles began in the summer of 1942 and continued until the end of the war. "Willis" showed itself well as a staff vehicle, artillery tractor, etc., thanks to which orders for new batches of equipment constantly appeared. In total, the Red Army received more than 52 thousand of these machines.

However, not all cars were purchased in large quantities. For example, the Red Army showed interest in heavy 10-ton trucks, but did not need a large number of them. So, for several years only 921 Mack NR cars in different configurations were received. These machines were used in artillery units equipped with heavy systems, as well as in other units and in the rear.

Perhaps the rarest Lend-Lease truck has become the American "six-ton" Autocar U8144T. Truck tractors of this type were the basis of the imported pontoon-bridge park. The Red Army received only a few such kits, and with them only 42 cars. 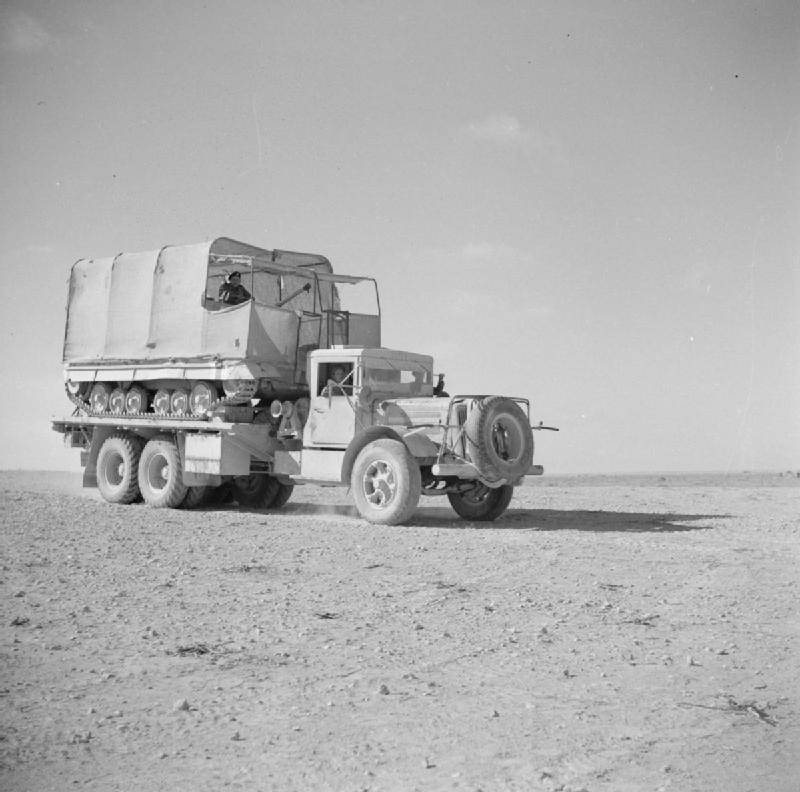 After the end of the Great Patriotic War and World War II, the countries participating in the Lend-Lease agreements began to settle accounts. Lost equipment, including numerous cars of all types were simply written off, and the remaining material should be returned or paid. Part of the automotive equipment was left in the Red Army and the national economy, taking it into account in further calculations. For a long time in parts, factories and collective farms, it was possible to meet imported cars of one type or another.

Deliveries of American and British Lend-Lease automobiles cannot be recognized as useful. The regular receipt of equipment at rates of up to several thousand units a month — together with its own production — made it possible to more quickly make up for the losses of the existing army, re-equip it, and also saturate the rear units and the national economy. The increased rate of supply of equipment obviously affected the economy and the combat readiness of the army.

The ability to purchase cars or other equipment from foreign countries allowed to partially unload our own production and reduce the corresponding consumption of raw materials. The freed resources and production capacities could be thrown to other urgent tasks. 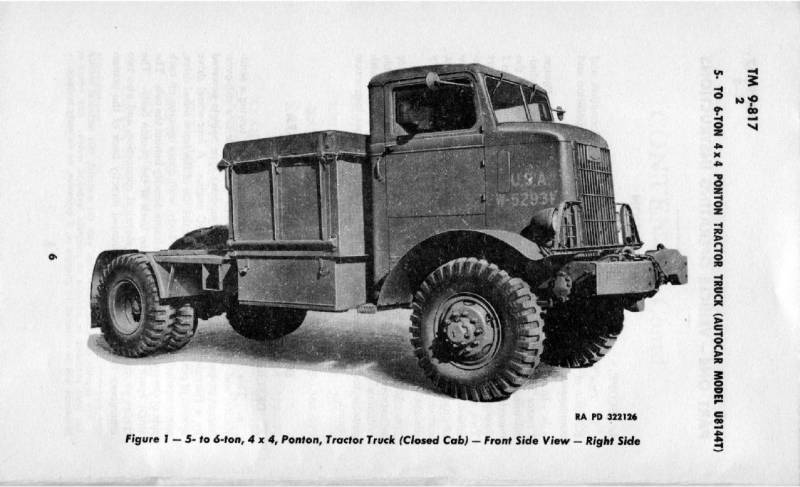 Six-ton ​​truck truck Autocar U-8144-T. Photo US War Department
Finally, Soviet specialists were given the opportunity to fully study and evaluate the modern developments of many foreign automobile companies. The technique of fifty has undergone careful study. Already during the war, the accumulated experience began to be used in their own projects.

With all this, there were economic benefits. During the years of the war, a significant part of the Lendliz equipment was lost and therefore did not need to be paid. After lengthy negotiations, the USSR and the United States agreed to pay 720 million dollars, while the total value of the delivered products reached almost 11 billion dollars.

Already in 1941, the Soviet Union had new opportunities associated with the American Lend-Lease program. The Soviet military and political leadership competently used them and received maximum benefits - with very limited expenses. The automotive sector, critical for the army, was no exception. As a result, victory was brought closer by both domestic and foreign cars of all necessary models.

Ctrl Enter
Noticed a mistake Highlight text and press. Ctrl + Enter
We are
Workers front roadsLend-Lease record holder Studebaker US6
194 comments
Information
Dear reader, to leave comments on the publication, you must to register.