Vietnam War Assault Rifles: What did the Americans and Viet Cong do from 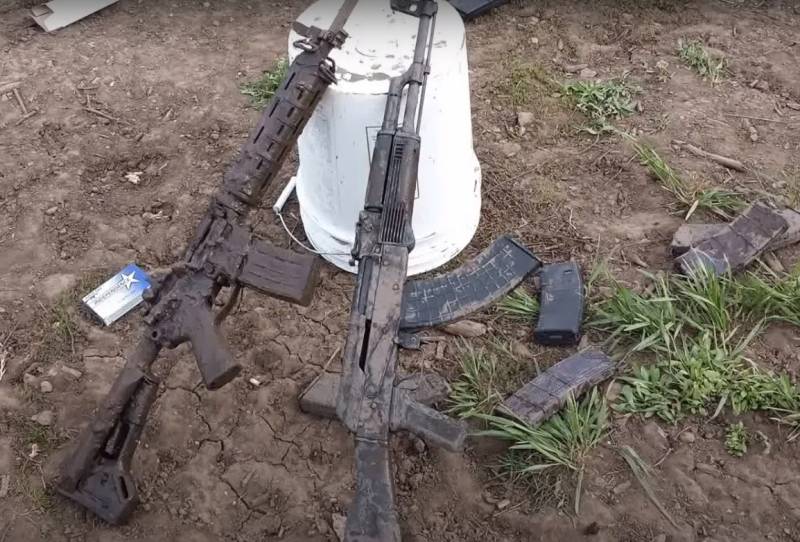 The Vietnam War is one of the most tragic and, at the same time, interesting pages. stories Soviet-American confrontation. Today it is interesting to us also because on the land of distant Indochina not only Vietnamese and American soldiers fought among themselves, but also weaponmade in the USSR and the USA.


The main machine gun, which was in service with the Vietnamese People’s Army and the Vietnamese partisans (National Front for the Liberation of South Vietnam) was the legendary Soviet AK-47. As you know, the Communists of Vietnam enjoyed the full support of the USSR, China, North Korea and other countries of the socialist camp.

The most common small arms of the Vietnamese partisans were Mosin rifles, PPSh, and French MAT-49 submachine guns. The latter fell into the hands of the Communists as a captured weapon after the evacuation of French colonial troops from Vietnam. As soon as the United States began to provide assistance to South Vietnam, the American M1 rifles appeared at the partisans - they were taken from the killed or captured soldiers of the South Vietnamese army, in addition, many South Vietnamese soldiers themselves went over to the partisans along with their weapons.

In 1965, North Korean-made automatic rifles appeared in Vietnam, which were a modification of the AK-47 and became known to the Americans as Type 58 (Type-58). As the name implies, their release in the DPRK began in 1958, and in the mid-1960s. weapons began to be exported to Vietnam, Cuba, as well as to numerous rebel structures in Asia, Africa and Latin America.

Historian Max Hastings, author of The Vietnam War, recounts that the North Korean Type-58s were great for fighting in the Vietnamese jungle. The guns almost never clogged, the sleeves did not get stuck in them, they were easy to operate and maintain, and yesterday's Vietnamese peasants quickly mastered the perfect handling of this type of weapon. Among the unconditional advantages of the machine, low weight and rate of fire stood out.

For the Vietnamese partisans, the AK-47 and Type-58 assault rifles became an important aid in confronting the troops of South Vietnam and the United States, as well as their other allies. As soon as this opportunity was provided, the Vietnamese gladly changed their old weapons, including the M1, to the Soviet AK-47 or North Korean Type-58. Since the AK-47 was rare at first, the American historian Kevin Dockery notes that the Soviet machine gun was a weapon of great value to the partisans of Vietnam.

While the USSR successfully used a Kalashnikov assault rifle, the United States continued to search for such small arms that could be considered as a worthy alternative to the Soviet "Kalash". Initially, the American command settled on the M14 rifle, which was a modification of the M1 Garand, which showed itself well in the battles of World War II.

But the weight of 5,5 kg and a length of 1,1 meters made the rifle too bulky for use in the jungle. After all, soldiers often had to make their way through literally impassable sections. In addition, the American rifle was inferior to the Soviet machine gun in both rate of fire and service. In the end, it was forced to admit and senior officials in the Pentagon.

The US military command began the search for an “ideal machine” that could become a worthy opponent of the Soviet AK-47. The Pentagon turned to the Colt company, which offered the AR-15 rifle. The tests completely satisfied the American generals and in 1963 a contract was signed for the supply of 104 thousand AR-15 rifles, which received the name M16 in the USA.

The undoubted advantages of the new rifle were a long firing range of almost 2 times (550 meters versus 300 meters), a small cartridge weight, and, surprisingly, a lower weight of the rifle itself - 2,8 kg versus 3,8 kg. However, miscalculations were revealed during the tests - the difficulty in operation and maintenance, which requires special training for the soldier, and the problem with jammed sleeves, which got stuck more often in the M16 than in the AK-47 and its North Korean modification.

However, when the American army began to use the M16 in Vietnam, it was almost immediately revealed that it was completely useless for the climatic conditions of Indochina. Often, after a single shot, the sleeve got stuck in the chamber, had to clean the barrel. In 1966, the inspection revealed malfunctions in every seventh rifle. However, the American leadership, wanting to relieve itself of responsibility, blamed the soldiers themselves for the M16 malfunctions - supposedly, the infantrymen do not clean their weapons well and that is why problems arise.

However, difficulties with the use of M16 were encountered not only by simple infantrymen, but also by marines and commandos. Veterans of the Vietnam War recall that the rifles were simply terrible, and not every seventh rifle was faulty, but 75% of all M16 delivered to warring units. The best evidence of the unsuitability of the M16 for the Vietnam War was the critical attitude towards it from the Vietnamese partisans, who were not eager to fight with captured American rifles and, at any opportunity, changed them to AK-47.

Nevertheless, the American leadership stubbornly rejected any criticism of the rifles. And American soldiers continued to use the M16, which would be an excellent weapon for other climatic conditions, but in Indochina they could not stand the competition with the Soviet AK-47. There is no doubt that the large losses of the American army in the Vietnam War were to some extent the result of problems with the small arms used.

Ctrl Enter
Noticed a mistake Highlight text and press. Ctrl + Enter
We are
The tragedy of the American army ("The Atlantic", USA)Situational analysis of the death of the MH17 flight (Malaysian Boeing 777), made on the basis of engineering analysis from 15.08.2014
57 comments
Information
Dear reader, to leave comments on the publication, you must to register.