The last campaign of Gustav III. The defeat of the Russian army in the battle of Kernikoski 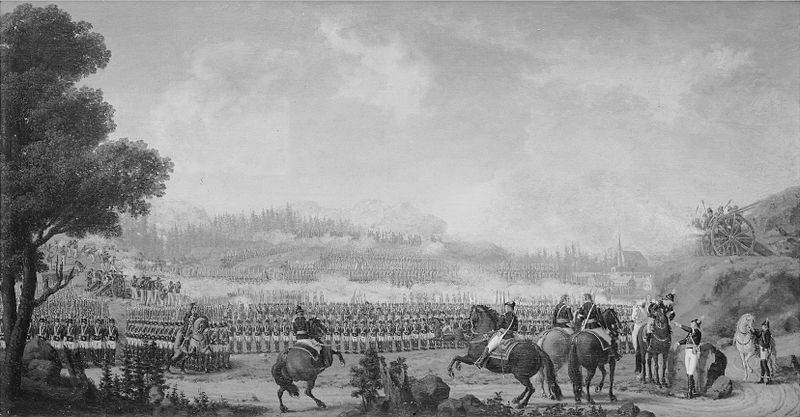 Russian-Swedish War 1788 — 1790 230 years ago, in April 1790, the Swedish army defeated Russian troops in the battle of Kernikoski. The land campaign of 1790 was conducted on Swedish territory, still passively. Everything was limited to a few hassles. The outcome of the war was decided at sea.

The general situation. Preparing for a new campaign

The 20-strong Russian army under the command of Musin-Pushnik acted indecisively in the campaign of 1789. The land war was limited to a few skirmishes, which generally ended in favor of the Russian troops. Petersburg was happy with that. On the one hand, the main forces of the army were connected by the war with Turkey, on the other, the threat of war with Prussia arose. The decisive defeat of the Swedes in Finland could prompt the Prussian king Frederick William II to attack Russia. Therefore, Catherine II was such a fuss with the Swedish king Gustav III.

For the winter, Russian troops were located on the border. Part of the army observed the border from Neyshlot to the Kumen River, the second part - from Kumen and the coast of the Gulf of Finland to Vyborg. At the beginning of 1790, Catherine the Great replaced Musin-Pushkin with Count Ivan Saltykov (son of the famous Russian commander P. S. Saltykov). Saltykov was personally brave, but he did not have special military talents. Therefore, during the campaign of 1790 the general situation did not change. Both sides acted indecisively; there was not a single major battle with a decisive outcome. Russians and Swedes trampled in the region of about 100 miles long and as wide.

Obviously, this was due to big European politics. The war with the Turks continued. Russian victories on land and sea inspired the Russian empress. She considered bold projects on the restoration of Greece, the occupation of Constantinople and the straits. But Russian victories in the war with Turkey troubled the West. There was a threat of war with Prussia. The Swedes and Poles asked for help from Berlin. An alarming situation was in Poland. England supported Porto, therefore did not want peace between Russians and Swedes. In France, a revolution took place that attracted the attention of leading powers. Russia did not have strong allies in Europe: Austria was tied by its problems, Denmark was weak. Thus, Catherine was connected with other more important issues, Gustav was not interested in her. But the Swedish High Command could not really organize anything. The outcome of the war was decided at sea.

As a result, the Prussian threat disappeared, and Russia was able to end the war with Sweden and Turkey. Berlin decided to participate in the section of the Commonwealth. In addition, the Berlin courtyard (like other European capitals) was increasingly distracted by events in France from the Middle East and Baltic. Sweden was left without military support. 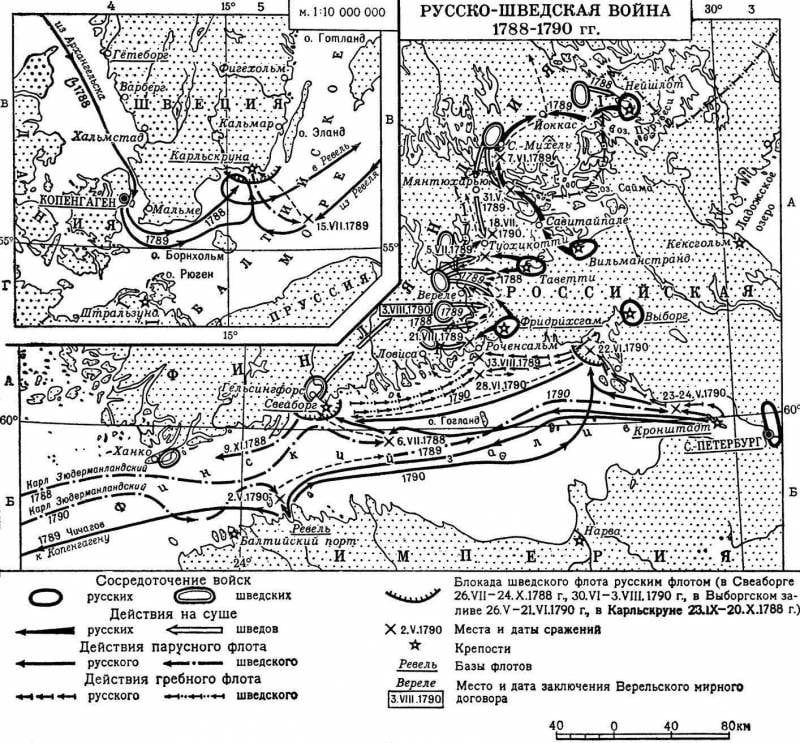 The Swedish king Gustav III did not abandon the idea of ​​victory over Russia with the goal of revenge for previous defeats. The Swedish monarch conducted active negotiations with Poland, Prussia, Turkey, England and the Netherlands about military support (Berlin and Warsaw), about financial assistance in the war with the Russians. But he did not achieve much success. In Stockholm and Sweden continued military preparations. Actively built ships for the galley fleet, for the campaign of 1790 prepared several new battleships. Old ships were being repaired at shipyards. In coastal cities, fearing the Russian fleet, they were preparing a militia. In the Swedish capital were ready to raise 10 thousand citizens, they were armed with guns and sabers. A voluntary set of funds was made to strengthen the capital. Back in the fall of 1789, a new recruitment was made into the army. The northern Swedish provinces also prepared for war. In the province of Westerbotten, 5 thousand people recruited police. More stocks were sent to Finland weapons and uniforms.

In general, war was not popular in Swedish society. Only in 1789 Gustav was able to suppress the Anyala confederation, which the officers created. Their main demand was peace with Russia. The military court sentenced the arrested officers to death, but the king did not dare to enforce the sentence (only one person was executed). It was already obvious that there would be no brilliant victory. A protracted war was waged, which led to casualties and financial problems. An epidemic was raging in the Finnish army, killing more lives than fighting. Entire battalions consisted of recruits. The king went into great debt. Trade and industry were in danger of total ruin. Therefore, in the kingdom of constant rumors circulated about the imminent conclusion of peace. 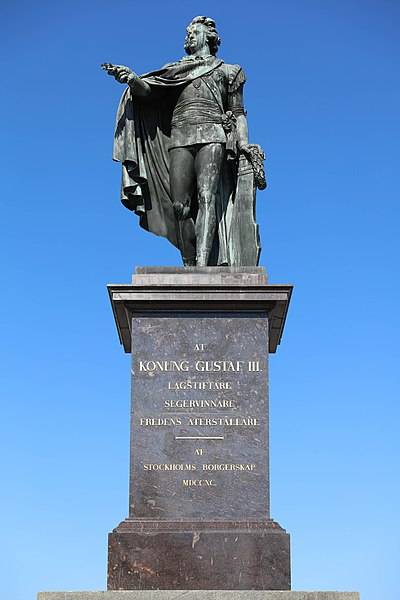 Neither Russia (connected by other directions) nor Sweden had a noticeable advantage at the front. However, the Swedish high command wanted to seize the initiative in the war and be the first to open the campaign. Winter 1789-1790 was warm, so the Swedish fleet was able to perform earlier than usual. The king did everything possible to expedite the outbreak of hostilities. He feared a Russian attack on Sveaborg. Already in March 1790, Gustav left the capital and arrived in Finland. General von Stedingk (Steedink) suggested that the king attack Wilmanstrand, considering it the central stronghold of the Russian army. The blow was supposed to strike from two directions: from the side of the river. Kumeni and from Pumala.

Even before the opening of hostilities on land, the Swedes struck on the coast of Estonia. Swedish ships attacked the Baltic port at Revel. The crews of the Swedish frigates burned the fort and its supplies, riveted several guns, and took from the local residents a contribution of 4 thousand rubles. In essence, it was an ordinary pirate raid that had no influence on the development of the war. 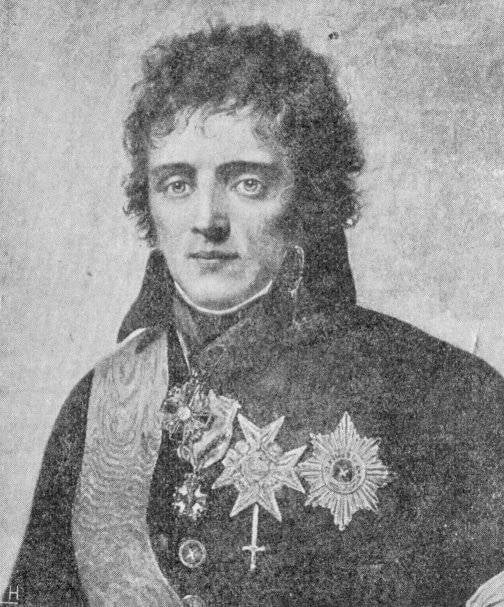 In March 1790, the first skirmishes took place in Savolaks and on the southwestern border of Finland. The Swedes lost about 200 people killed. In April, the Swedish king himself led the army and led the offensive, trying to break into Russian Finland from the side of Savolaks. April 4 (15) there was a battle near Kernikoski and Pardakoski. The Swedes pushed the advanced Russian forces, captured about 40 people, captured 2 guns, stocks and the treasury of 12 thousand rubles. The Russians retreated to Savitaypale. April 8 (19) a new skirmish took place at Valkial, in the area of ​​the river. Kumeni. Gustav again led the troops and was slightly injured. The Swedes again pushed back the Russian troops and seized supplies of provisions. The terrain was difficult to supply troops, so food production was considered a success.

The Russian command ordered the return of positions at Kernikoski and Pardakoski. April 19 (30), 1790, General Osip Igelstrom (Igelstrom) with 4 thousand detachment went on the attack and pressed the Swedes. The Swedish squad was led by the king's favorite, General Gustav Armfelt. But the attempt of the Prince of Anhalt of Bernburg to take Kernikoski did not lead to success. The Swedes received strong reinforcements and launched a counterattack. Prince of Anhalt of Bernburg did not wait for help, and because of a strong Swedish counterattack, Russian troops were forced to retreat. The prince himself was seriously injured and soon died. At the same time, a convoy of brigadier Vasily Baykov led an attack on the island of Lapensali. Having seized the island, Baykov’s detachment attacked the battery at Pardakask. The battle went on for several hours, the Baykov convoy almost reached the location of the battery and retranscements, however, here too, the Swedish reinforcements by superior forces went over to the counterattack. Baykov was seriously injured and died. The troops of Major General Berhman and the Brigadier Prince Meshchersky were to bypass the Swedes and attack them from the rear. But they could not do this - on the way to the place there was a lake and the ice turned out to be unreliable, I had to look for a new road. As a result, the reinforcements did not arrive on time and also retreated. Our losses - about 500 people killed and wounded, Swedish - more than 200 people.

This failure of the Russian army did not become an important matter. Almost at the same time (April 21), Russian troops successfully attacked the Swedish forces, led by Gustav himself, on the Kumen River. Two days later, Russian troops under the command of General Fedor Numsen again attacked the enemy and forced the Swedes to retreat behind Kumen. The Russians pursued the enemy, took 12 guns and the settlement of Anyala, where for several days they restrained the attacks of the Swedes. 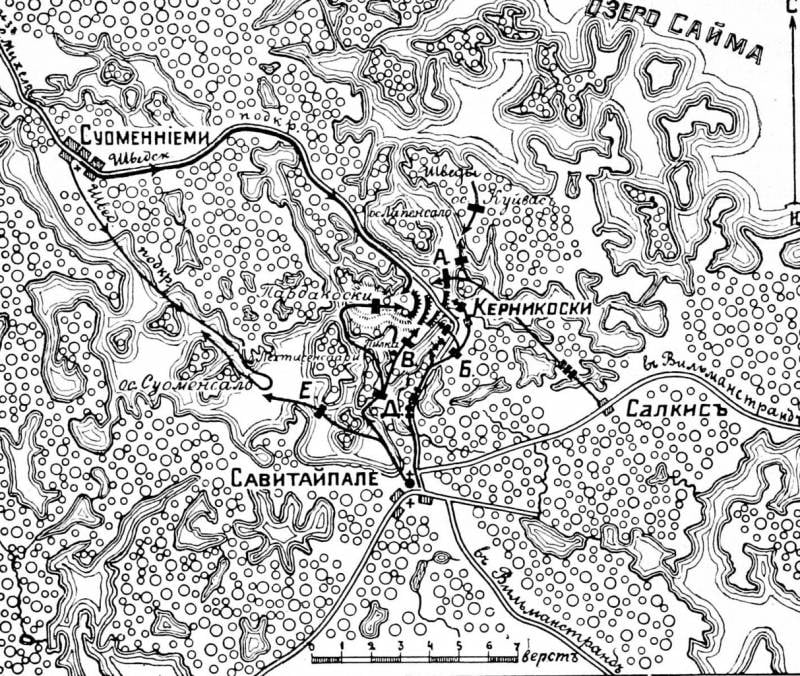 After an unsuccessful offensive on land, King Gustav decided to go to the galley fleet and attack the Friedrichsham area. At the same time, ground forces under the command of Generals Armfelt and Steedinck were supposed to operate north-east of Friedrichsham. Indeed, on April 23 (May 4), the troops of Steadinck took up in another skirmish. The Russian side reported 200 killed Swedes and 42 Russians. The Swedes reported 30 dead and 100 wounded, 46 dead Russians were found.

Thus, Gustav planned a threat from the sea in the Friedrichsgam region to force the Russians to concentrate troops here. Thus, to divert the attention of the Russians from the troops of Generals Armfelt and Stedinok, who were supposed to deeply invade Russian Finland. Further, the Swedish naval and ground forces were to unite in the Vyborg region, creating a threat to the Russian capital. The Swedish monarch hoped to force the Russian government to peace on favorable terms.

The king himself managed to defeat the Russian galley fleet at Friedrichsgam, the Swedish naval fleet gave battle at Revel and Krasnaya Gorka. The Swedes were preparing a landing near Petersburg. However, on land, the Swedish army had no success. Armfelt's squad was defeated at Savitaypale. The general himself was wounded. Steadinck and Armfelt did not have the strength for a decisive offensive. The general, simultaneous and systematic action of the Swedish fleet and army did not work. Either the calculations turned out to be incorrect, then the weather interfered, then the slowness of the troops and command errors, then the movements of the Russian forces. As a result, the largest battles took place at sea, not on land.

Ctrl Enter
Noticed a mistake Highlight text and press. Ctrl + Enter
We are
Russia's struggle against Swedish revanchism in the second half of the 18th century. Öland BattleThe problem of the safety of St. Petersburg in the Russian-Finnish relations to 1917.
12 comments
Information
Dear reader, to leave comments on the publication, you must to register.