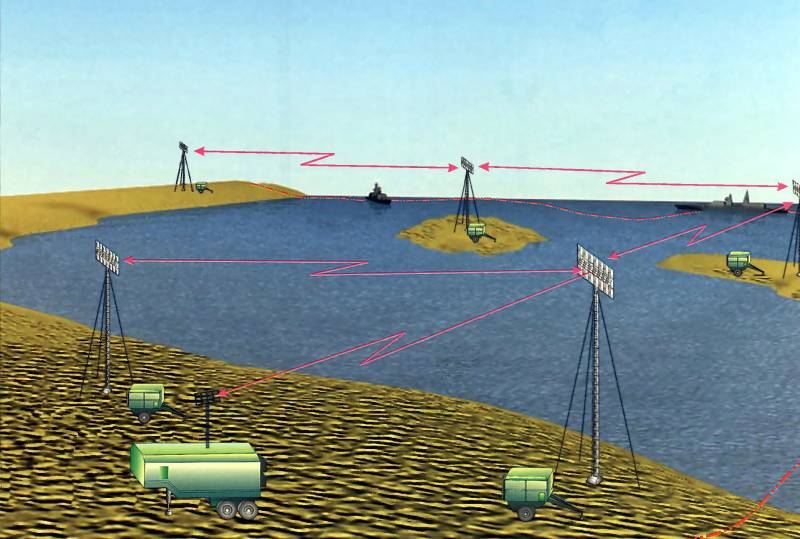 The principle of building a multi-link radar system 52E6MU

The leading countries of the world are working on aircraft and air attack means with minimal visibility for enemy detection means. In parallel, the creation of surveillance and detection systems capable of detecting such complex targets is underway. One of the results of this work was the Russian RLC 52E6 “Struna-1”. Due to the special principle of operation, he discovers even small and subtle objects.

From research to OCD

By the mid-eighties, several research projects were launched in our country aimed at finding ways to counter the technology of stealth aircraft. A likely adversary has already received new stealth aircraft, and our army needed appropriate means of detection.

In 1986, the Central Scientific Research Institute of Radioelectronic Systems (TsNIIRES) and several other organizations were given the task of conducting research on the so-called bistatic radar. Research took several years and ended in success. TSNIIRES confirmed the fundamental possibility of creating a radar on a non-standard principle.

The direct development of the station was entrusted to the Nizhny Novgorod Research Institute of Radio Engineering (NNIIRT). In the first half of the nineties, the institute carried out new research, as a result of which the development of the radar itself began. In 1997-98 The first prototype of a promising station that received the 52E6 index was sent to the landfill. The name "String-1" is also used. Some sources feature the Barrier-E code.

At the level of theory

The concept of a bistatic radar developed by TsNIIRES and NNIIRT was not new - according to this scheme, the first Soviet locator RUS-1 was built in the late thirties. However, it retained significant potential and was of interest in the context of detecting subtle objects. The essence of this concept is to divide the station into a transmitting and receiving unit, spaced a considerable distance.

A “traditional” active-type radar directs a probing signal of a certain configuration to the target, after which it receives attenuated reflected radiation. The essence of the so-called stealth technology consists in a sharp weakening of the reflected signal, as well as in its redirection away from the radar. Thus, the reflected signal is almost indistinguishable from background noise, and target detection is difficult.

The 52E6 bistatic radar station uses a “clear” location. During operation, the transmitter sends signals in the direction of the remote receiver. By distorting the pulses reaching the receiver, static or moving objects are detected. Further, the radar automation is able to tie the track and transmit data to consumers. 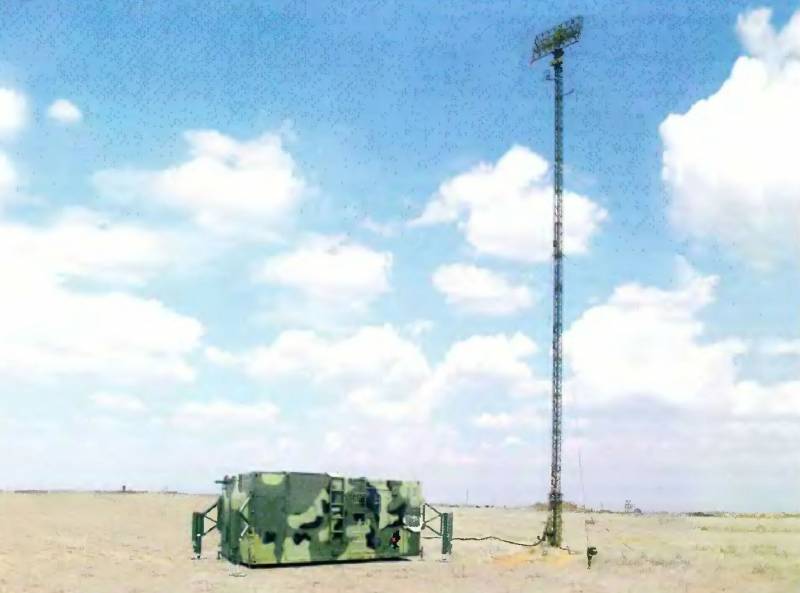 Experienced transceiver post at the training ground
This method of operation allows you to dramatically increase the effective scattering area of ​​the target in comparison with the EPR during the operation of the "traditional" radar. Accordingly, the likelihood of detecting a small, low altitude or inconspicuous target increases. Thus, the creation of a bistatic "transparent" radar station promised great advantages in the context of the development of air defense.

The 52E6 Struna-1 radar system passed state tests in 1998. Over the next few years, this product was improved, and in 2005 it was put into service. By this time, the work of the RLC was checked both in test conditions and in military exercises.

A few years after this, an improved complex of version 52E6MU was submitted for testing. Its refinement continued until the end of the decade, and in 2010 this radar station was adopted. By this time, NNIIRT and related enterprises launched production and managed to supply several sets to the army. In addition, one of the products was shown at the MAKS-2009 exhibition.

According to the NNIIRT reports, the first 52E6MU two-link kit was manufactured in 2008. Another one was handed over the next year. Information on new supplies during the tenth years is not available. Nothing is known about export orders.

According to open data, the product 52E6MU is a decimetric bistatic / multi-link radar complex operating in the open. All radar equipment is placed in containers on a towed or self-propelled chassis, which simplifies transportation and deployment. The complex includes all the necessary means to block large areas and monitor the air situation.

A set of radar “Struna-1” can include up to 10 transceiver posts associated with a control machine. The complex also includes various facilities and services. Station components are deployed around the perimeter of the protected area, subject to technical constraints. The working facilities of the complex support radio communication.

The RLC 52E6 receiving and transmitting post is a container with a lifting mast, on which the antenna device is located. The latter includes a transmitting array and a receiving headlamp with three beams. Radiation is conducted in a sector 55 ° wide in azimuth and 45 ° in elevation. The post transmits a sounding signal, and also receives signals from the two nearest posts. Processing the received signals, each post determines the presence of air targets. All information about the situation goes to the command post. 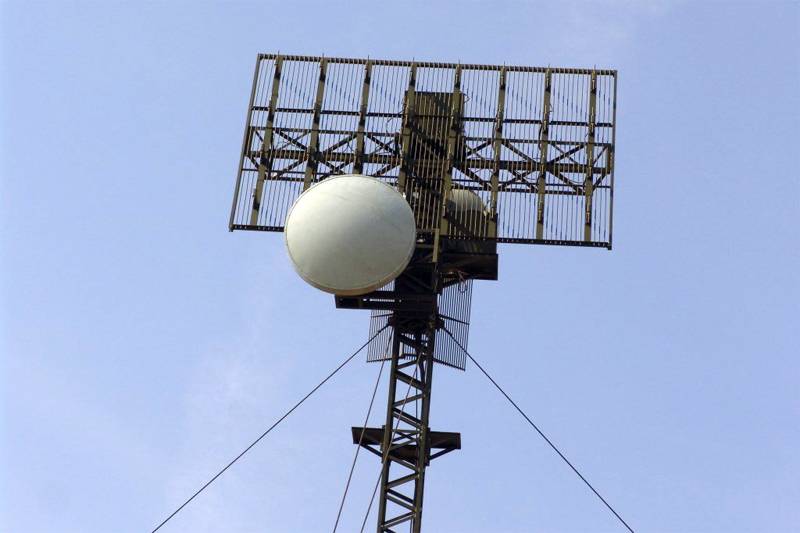 Antenna device of the transceiver post
RLC 52E6MU can form a continuous radar barrier of arbitrary shape hundreds of kilometers long. The maximum distance between receiving and transmitting posts is 50 km. Depending on the class of the target, the depth of the barrier zone reaches 12,8 km. The detection height is from 30 m to 7 km. Goals are tracked at speeds up to 1500 km / h. Analyzing the incoming data, the automation of the complex distinguishes between bombers and fighters, helicopters, TSA, etc.

The radar station “Struna-1” with spaced posts has important advantages over other locators, but it is not without drawbacks. Proper deployment and application of such technology allows you to fully realize its potential.

The main advantage is the ability to detect small or small targets that are too complex for "traditional" radars. Using one 52E6MU complex, it is possible to create a control zone up to 500 km long along the front. Using this technique together with other radar systems, it is possible to create a highly efficient layered detection system that can detect all potentially dangerous objects - regardless of speed, altitude, use of stealth technologies, etc.

The main disadvantage of Strings-1 is the specific configuration of the viewing area. The station creates an extended and narrow “barrier” several kilometers high. This makes it difficult to solve some of the monitoring tasks, which requires the involvement of other radars. An ambiguous feature of the complex can be considered the presence of a large number of different funds deployed at significant distances from each other. This complicates the process of preparing for work.

In general, the bistatic radar 52E6 (MU) "Struna-1" is a specialized tool that can solve special problems that are not available to other existing systems. At the same time, she herself cannot do all the required work and needs the help of other locators.

According to well-known data, in the recent past, the Russian army received only a few “Struna-1” complexes, and soon this equipment took up combat duty. According to some sources, the new radar systems are deployed in a westerly direction, where the appearance of subtle air targets is most likely. Complexes 52E6 work together with other locators and complement them.

Despite the small number and specific deployment, RLC 52E6 attracted the attention of foreign experts and the press. So, over the past few years, materials on “String-1” with various intonations have regularly appeared in foreign media from surprise to fear. This reaction is mainly associated with the stated ability of the radar to detect and accompany stealth aircraft. Foreign armies, probably, also drew attention to the “String-1” and made conclusions, but are in no hurry to publicize their opinion.

Thus, in the context of the development of radar systems, a curious situation has developed. A few new-type radar systems are capable of detecting stealth targets in the form of modern attack aircraft and their weapons. With such capabilities, the RLK 52E6MU is able not only to protect the protected areas, but also to deter a potential enemy who relies on tactical and strategic stealth aircraft aviation.

Ctrl Enter
Noticed a mistake Highlight text and press. Ctrl + Enter
We are
The advantages of the “Nebo-M” complexes in the anti-missile link of the Russian Aerospace Force of the Russian Federation: irreplaceable assistants of “Voronezh” and “Podletov”Task: to find stealth
22 comments
Information
Dear reader, to leave comments on the publication, you must to register.