Reasons for testing the T-14 Armata tank in Syria: reflections and assessments 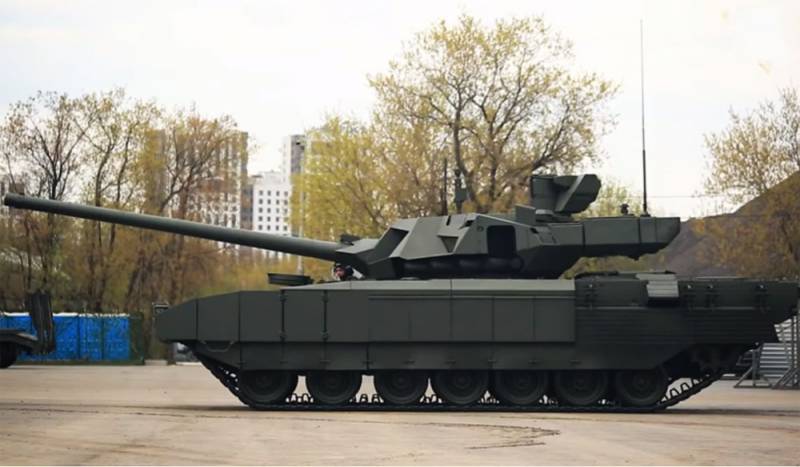 The press, social networks and the blogosphere continue the discussion on yesterday’s statement by Russian Minister of Industry and Trade Denis Manturov about testing the latest tank T-14 Armata in Syrian conditions. There are several vectors for discussion. And one of them is related to why the statement on testing the latest military equipment was made precisely by the head of the Ministry of Industry and Trade, and not by the head of the Ministry of Defense?


There were also comments of the following nature: “But did the Minister of Industry and Trade have the right to voice such information at all?”

Had or not had - the question, of course, is interesting ... However, it is much more interesting what tests the T-14 Armata tank could pass in the Syrian Arab Republic?

To begin with, why the statement was made by Denis Manturov. Everything is simple here. After all, the tank is not yet in service with the RF Armed Forces, although the contract was previously concluded. Therefore, the machine that goes through the final revision is primarily in the hands of industry. Manturov is responsible for the industry.

Now about why the tests were carried out, as the minister told about this in an interview with Russia 1 television channel, in Syria? Reflections and evaluations.

First, at one time, the supreme commander designated Syria not only as a country where Russia is actively helping the SAA to counter international terrorism, but also as a country where it is possible to test the latest and most promising domestic weapons. One thing in this case, as they say, does not interfere.

Secondly, if you checked the effectiveness of the "Caliber", Su-57, entire families of UAVs, electronic warfare, brought the "Night Hunters" to mind, then checking the T-14 Armata in Syria’s climatic conditions would not hurt. Moreover, in his speech, Manturov announced that there were applications for Armata from foreign partners and the future formation of an export passport - the parameters of the tank for export. Export itself, as the minister noted, will not be established until the start of serial deliveries of the T-14 to the Russian Armed Forces.

Thirdly, the reason for the T-14 tests in the SAR is a unique combination of the ability to use armored vehicles in areas where hostilities are taking place, with the possibility of “running in” in special climatic conditions. In the western provinces of the SAR, including Latakia and Idlib - high humidity and high air salinity - the Mediterranean Sea makes itself felt. In the provinces of the south, east and north-east of the country there is a climate with desert “charms”, including dust and sand storms, extremely low humidity against the background of significant changes in day and night temperatures. Although it is unlikely that the T-14 "drove" to the east of Syria for testing.

For obvious reasons, it’s one thing to test the latest tank, for example, in the Ural conditions of Russia, and quite another to test in Latakia. And given that “Almaty” has a high export potential, it would be strange to miss the opportunity to test a new generation tank under conditions that may well meet the climate conditions of potential customers.

The network (including in the foreign press) also discusses the question of whether Manturov is misleading. The message is this: "If there are no photos on the Internet with" Armata "from the" bearded boys ", then no tests, most likely, were not."

The reasoning of such a plan looks, at least, strange. As if under the test of a tank in combat conditions it is necessary to understand exclusively a tank “meat grinder” or a tank wedge breaking through the enemy’s defense lines ...

It is worth recalling that today the T-14 Armata is equipped with a 125-mm smoothbore gun of the 2A82 family. The aiming range of this gun for a high-explosive fragmentation projectile is 4,7 km, for URS (guided missile) - about 8 km. Even if the “bearded boys” were expecting the “Almaty” to appear on the horizon in the olive grove, armed with a camera with an “impressive” zoom, it is unlikely that anything happened in the end. For a preliminary assessment of the work of a tank gun, a few shots are enough - to organize a show with a massive shelling of the positions of the militants is not necessary.

It is possible that at the moment, the American and Israeli military are trying to find that coveted shot with the T-14 test in Syria among streaming data from spy satellites. But if the frame has not yet been presented, then this does not mean that there was no Syrian testing.

Show on the official portals of the Ministry of Industry and Trade, the Ministry of Defense or on the manufacturer’s website? So everything has its time. They will show.

After all, one should not forget about a special group of "experts" who are not so in any case: to show the shots with "Armata" now - they will call them "Shoigu cartoons", "additional anti-humane intimidation against the backdrop of a pandemic" or even the "Astrakhan staging of Syrian landscapes" , do not show a second after the statement of Manturov - they will declare "a lie and an attempt to mislead the world community." But these are the problems of those "experts."

For the Armed Forces of the Russian Federation, the main thing is that the tank begins to enter the troops truly brought to mind and with the worked out various modes of its use.

Ctrl Enter
Noticed a mistake Highlight text and press. Ctrl + Enter
We are
"Signal for NATO": data on tests of the T-14 Armata tank in the SAR are discussed in the foreign pressReport on the results of the survey-2013 "Evaluation of state political figures"
271 comment
Information
Dear reader, to leave comments on the publication, you must to register.