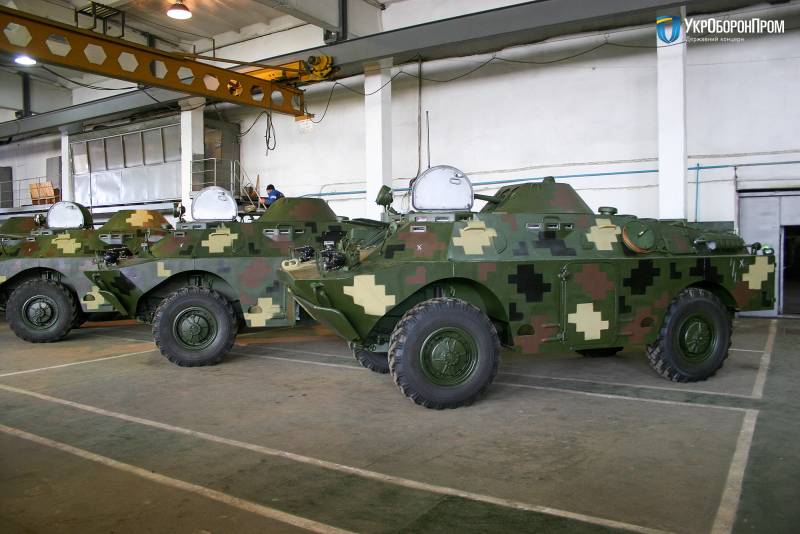 New equipment in the NBTZ workshop

Perhaps the main way to update the fleet of equipment of the Ukrainian army is now to repair and modernize old armored vehicles produced back in Soviet times. The other day, industry once again handed over to the army a batch of converted reconnaissance and patrol vehicles BRDM-2L1. This time, allegedly, the transfer of technology has become possible thanks to a number of successes and achievements.

On April 16, the state concern "Ukroboronprom" reported that the SE "Nikolaev Armored Plant", which is part of it, completed work on the next batch of BRDM-2L1 and transferred it to the customer. Eight vehicles go to the army as part of a new defense order.

It is noteworthy that a new batch of equipment was made even before receiving an official order from the Ministry of Defense, but this approach paid off. It was possible to transfer the finished machines to the customer almost immediately after signing the contract.

It is reported that in the recent past, the NBTZ has faced serious problems. By the beginning of 2019, the company had accumulated large arrears of overdue contracts. At the beginning of last year, the management changed at the plant, and new managers had to solve these problems. Last year, the debt to the Ministry of Defense was repaid, and the volume of work increased. 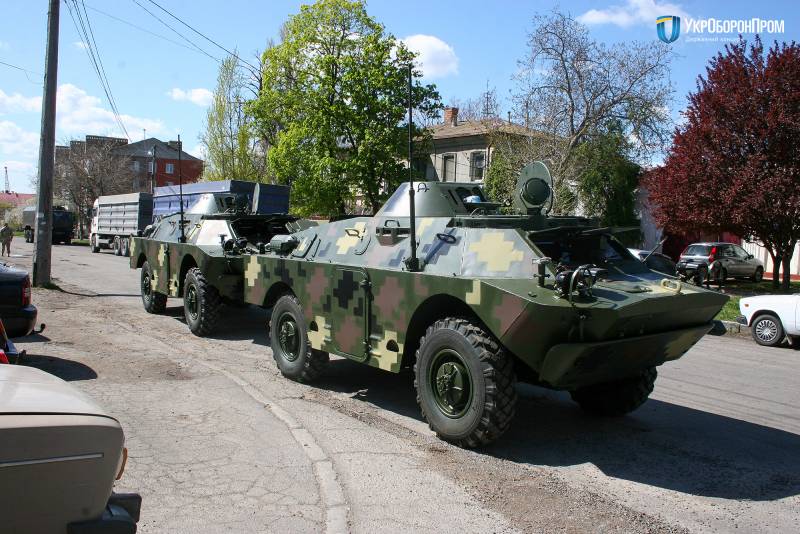 Cars depart for duty station
It is also noted that the assembly of a new batch of BRDM-2L1 had to be completed in an epidemic and quarantine. In this regard, part of the staff was sent home, while the rest continue to work. Despite this, the plant was able to fulfill the order.

It must be recalled that the Nikolaev Armored Plant has extensive experience in the restructuring and modernization of reconnaissance and patrol vehicles. The first project of this kind appeared back in the late nineties. In the future, once every several years, they presented the next version of the BRDM-2 update with these or those features.

All such projects were based on the same ideas. The existing hull was minimally redone, the outdated engine gave way to a modern one, the armament remained the same, and all on-board electronics were replaced. The current project BRDM-2L1 is already the fourth development of this kind from the NBTZ - not counting similar projects of other enterprises.

When upgrading the BRDM-2 to the “L1” level, a number of units are rebuilt with the restoration of technical readiness. Others are subject to change. The main innovations affect the design, interior and ergonomics of the armored hull. At the same time, the level of protection and combat capabilities as a whole remains the same. 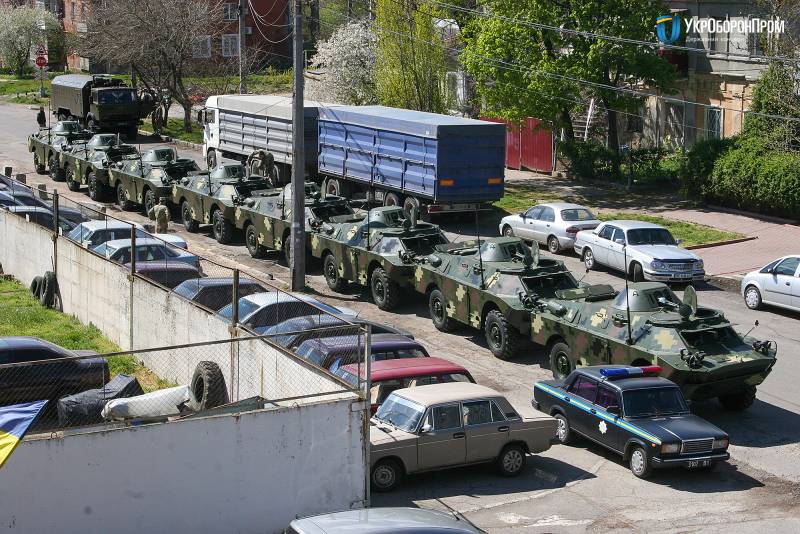 Additional wheels are removed from the central part of the body and niches are removed under them, which allows you to free up space inside the machine. Doorways cut through the sides for doors. To simplify production, rectangular top hatches from BTR-60P are used as doors - directly with a standard frame. In the upper sheets of the hull set embrasures for firing from a personal weapons.

The BRDM-2L1 reports mention a certain increase in the level of protection. At the same time, the standard body armor does not undergo any noticeable changes, with the exception of the insert of new units. Thus, the machine should still provide protection against machine guns and rifle bullets without an armor-piercing core.

According to reports, the BRDM-2L1 retains the previous power plant based on a gasoline engine and a standard mechanical transmission. The latter is simplified due to the lack of additional wheels. The power unit and chassis undergo a bulkhead, but are not rebuilt. The water cannon and the possibility of crossing water barriers to swim. 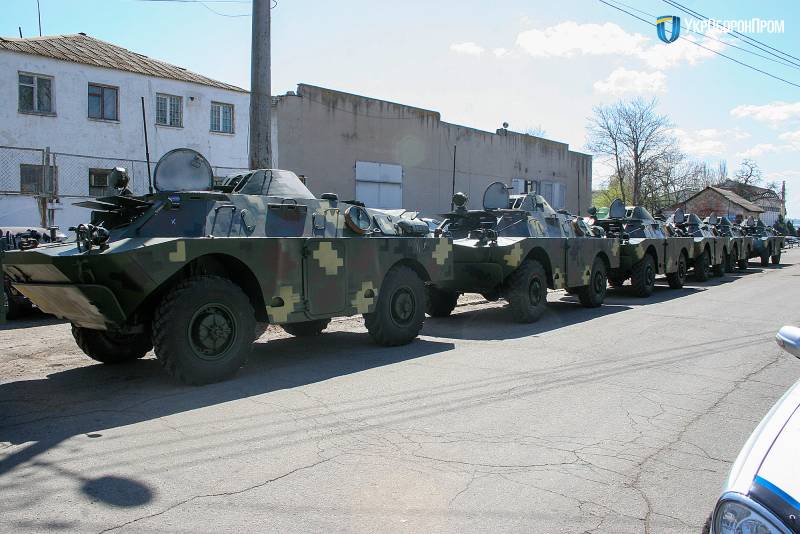 The project does not affect the standard tower type BPU-1 with installation for machine guns KPVT and PKT. It should be noted that the cars of the new batch that recently left the NBTZ did not have weapons. They should have received their machine guns later, already in the combat unit.

The airborne complex of equipment was seriously modified. Modern navigation and communication devices of Ukrainian and foreign production were used. A thermal imager was introduced to work in the dark (whose places are equipped, not specified).

The release of volumes inside the hull made it possible to organize additional seats for the landing. Inside BRDM-2L1 managed to accommodate 7 people - against 4 in the basic modification. Access inside is provided by old and new hatches. Declared a general improvement in ergonomics.

According to various sources and estimates, the armament of Ukraine has at least 400 BRDM-2 vehicles of several modifications. Since the late nineties, several attempts have been made to repair and modernize such equipment in order to maintain or improve the basic characteristics. Until now, all such projects, including created with the participation of the NBTZ, were not particularly successful. 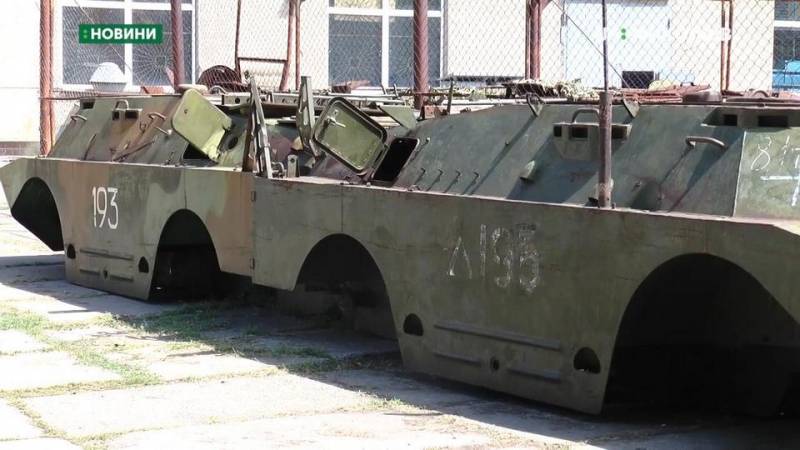 Corps BRDM-2, going to the alteration, 2019
So, the first project of modernization of the BRDM-2LD ended with the restructuring of only 10 armored vehicles. The production of such equipment had to be stopped due to the bankruptcy of the plant, which supplied new engines. Subsequent upgrades, such as BRDM-2M, BRDM-2DI, etc. also did not allow to launch a full-scale renewal of the army park.

The current project BRDM-2L1 so far looks the most successful and successful. In 2017, factory tests of this version of the armored car were carried out, after which the military started. Then an order for serial modernization was received. The first samples of “L1” were handed over to the customer last year. A few days ago another party was transferred.

Thus, to date, the Ukrainian army has received more than a dozen modernized BRDM-2L1. In terms of quantity, such equipment has already surpassed machines of previous projects. However, now and in the foreseeable future, vehicles with the letters “L1” in terms of numbers will not be able to compare with the base BRDM-2.

The recent supply of modernized equipment gives rise to optimism - but only within the framework of the current BRDM-2L1 project. The project was successfully brought to a series and deliveries of finished equipment to the troops, and in "record" quantities. However, such successes are directly related to a number of serious problems that Ukrainian industry is facing. 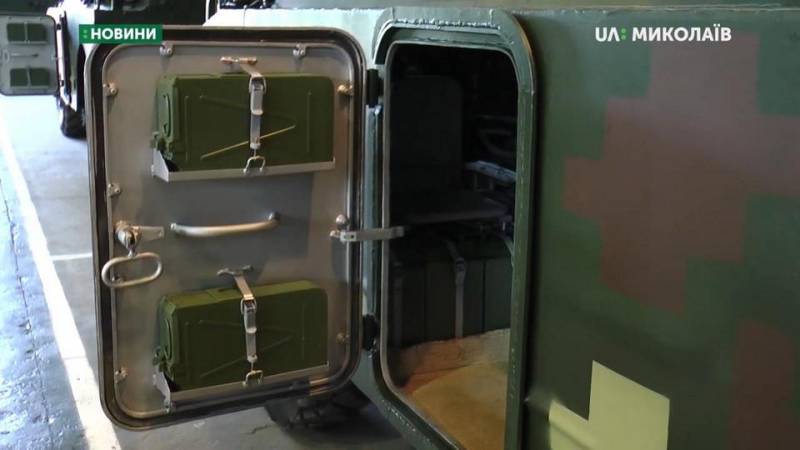 New door on the old building, 2019
The "new" BRDM-2L1 is another version of the processing of reconnaissance and patrol vehicles, created back in the early sixties. The Ukrainian army has a fairly large fleet of old BRDM-2 and does not have the opportunity to carry out their full replacement with the help of completely new equipment. Because of this, one has to look for solutions in the form of modernization projects.

At the same time, the financial capabilities of the customer are not too large, and orders do not differ in large volumes. As a result, the transfer of only eight upgraded machines is becoming an important event worthy of special mention. All recent modernization projects have consistently encountered similar problems.

Thus, despite all the optimism of customers and contractors, the BRDM-2L1 project is faced with all the observed negative trends and therefore is unlikely to be able to change the current situation in industry and the army. The army needs new cars, but even with the current volume of orders and the pace of production, the modernization of the entire fleet of old BRDM-2 will stretch for many years. However, this does not prevent industry and the army right now joyfully reporting the delivery of as many as eight armored vehicles.

Ctrl Enter
Noticed a mistake Highlight text and press. Ctrl + Enter
We are
Armored vehicles of Ukraine: results, potential, prospects ...Is the "old" well forgotten to become the "new"? Part-2. At the call of honor and duty
87 comments
Ad