Syria, April 20: US military blocked the road to a Russian patrol in Hasak 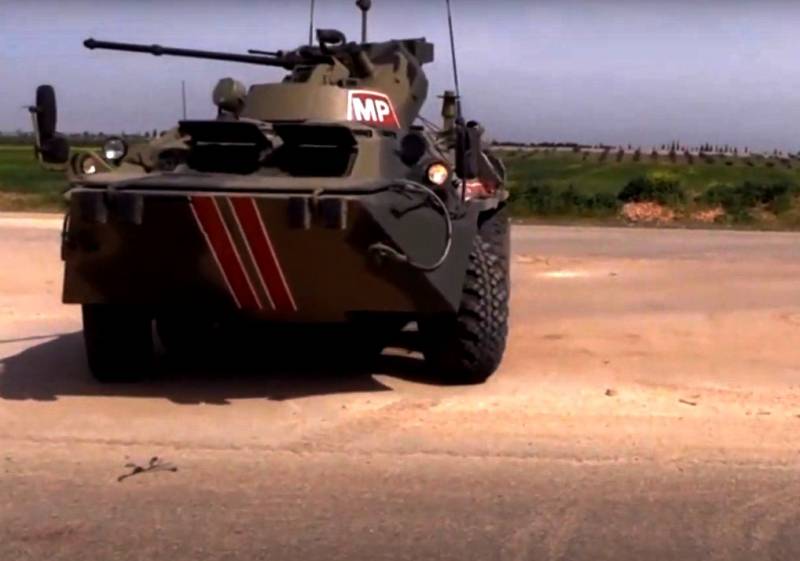 The situation in Syria remains extremely tense: internecine conflicts of militants, skirmishes with government troops. In the province of Hasaka, the US military again blocked the road to the Russian patrol.


In the area of ​​the city of Ras Al Ain, in the province of Hasaka, the US military blocked the road to the next convoy of the military police of the Russian Armed Forces. As a result, in order to avoid conflict, the Russian military police had to change the route and make a hefty detour.

Note that this is not the first case of such behavior of the US military. Obviously, representatives of the American army do not consider it shameful for them to carry out such petty dirty tricks on the Russian military in lawful patrols, which puts them on a par with various radical groups.

Meanwhile, in the province of Idlib, in the vicinity of a number of settlements, armed clashes were noted between various opposing forces. The first clashes occurred in the area of ​​the village of Kansafra, near the mountains of Jebel al-Zawiya. Here, militants from the Khayyat Tahrir al-Sham organization banned in Russia fired at positions of government troops with artillery guns.

In the village of Armanaz, the militants of the same HTS clashed with the militants of another radical group, Huras ad-Din. As it turned out, the Khuras ad-Din militants refused to hand over to the Khayyat Tahrir al-Sham the building they had previously seized in the center of the village. In this building, “Huras ad-Din” equipped its headquarters, and therefore categorically refused to give up the “established place” of the HTS.

In the city of Idlib, an explosion of a device buried in the car of one of the field commanders of the KhTS was parked in the Al-Anbar mosque. It is possible that this is another manifestation of a showdown between radical groups operating in the provinces.

In Raqqa, not far from Tel Abyad, the pro-Turkish “Syrian National Army” entered into battle with the Kurdish troops of the “Syrian Democratic Forces”. As a result of the collision, one of the SNA fighters was killed. But in the city of At-Tabka, the pro-Turkish formations managed to take revenge: the car of the Kurdish detachment, acting as part of the Syrian Democratic Forces, took off into the air. Three SDF fighters died.

Nevertheless, in the province of Deir ez-Zor, SDF fighters were able to carry out a successful operation to capture the “sleeping cell” of the Islamic State organization banned in Russia. Five IG members were arrested, explosives were found at the group’s headquarters and weapon.

Reprisals against civilians continue. So, in the province of Dara, unidentified people brutally murdered an elderly man. The body of the unfortunate was found on the road connecting the villages of Sahem al-Julan and Gillin. According to preliminary data, both sons of men serve in the Syrian Arab army. It is possible that they killed him precisely for this, and the performers were militants of one of the radical groups operating against government forces.

Residents of the village of Haj-Qaseim in Aleppo province complain of lawlessness on the part of the militants of the pro-Turkish Liva Samarkand group, who extort money for patronage and protection of property. In turn, in the villages of Sharran and Deir-Suran, militants from the pro-Turkish formation "Division Sultan Murad" prohibit local civilians from cultivating the lands of their relatives who are absent in the province. In Sheikh Hadad, the militants of the Sultan Suleiman Shah group are trapping people for ransom.

Pro-Turkish formations can feel at ease on Syrian soil while they enjoy the protection and patronage of Ankara. Turkey is increasing its military presence in the northern regions of Syria. The number of Turkish troops in Idlib is growing every day, the number of military equipment is also increasing.

Last day, a convoy of Turkish military equipment passed through the Kafr-Lyasin border crossing to Idlib province and advanced to the construction site of the next observation post in the area of ​​the village of Basames. Thus, there will be another strengthening of the Turkish army in the illegally occupied territory.
Ctrl Enter
Noticed a mistake Highlight text and press. Ctrl + Enter
We are
Reports from the militia of New Russia for 27-28 September 2014 of the yearDecember 2010 years. Russian March. Senseless and merciless? Notes not a Russian person
113 comments
Information
Dear reader, to leave comments on the publication, you must to register.