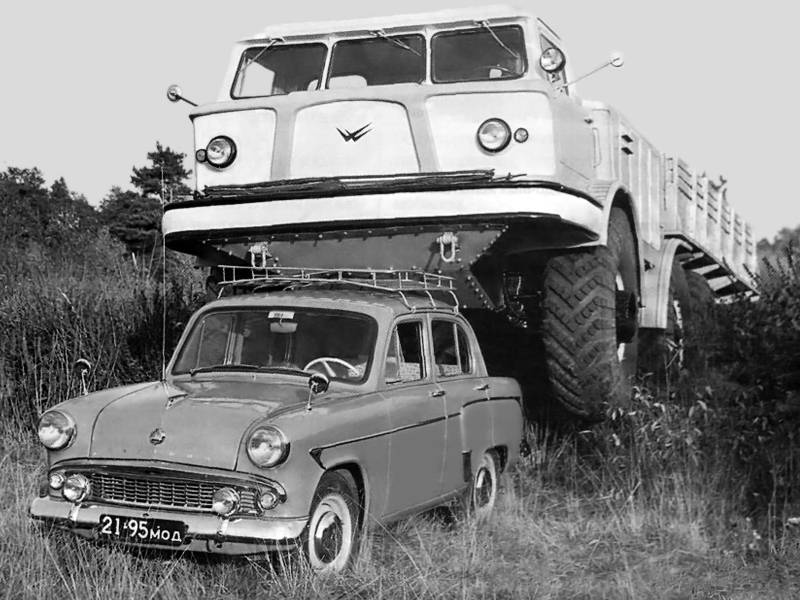 Photo, allowing to evaluate the dimensions of ZIL-135. Source: autowp.ru

The creation of special design bureaus or design bureaus at automobile plants of the Soviet Union became a requirement of the Ministry of Defense. The bureau initiated the development of new all-wheel drive military equipment, which the army was sorely lacking. In particular, at the Minsk Automobile Plant, the secret SKB-1 was engaged in heavy vehicles of the MAZ-535/537 family, which were subsequently relocated to Kurgan, freeing up capacity under the legendary MAZ-543. At the ZIS (until 1956, the ZIL was named after Stalin) a special bureau for military development was formed on July 7, 1954. The reason for this was the resolution of the Council of Ministers of the USSR No. 1258-563 of 25.06.1954, regulating the creation of a special bureau at all automobile and tractor plants for the design of military equipment. It was this decision that gave rise to the development of unique projects in the field of military automotive industry.

The Soviet Union was, if not the first in the world, then at least one of the top three for 40-50 years. The technological breakthrough made by the engineers of various design bureaus is difficult to overestimate. Since the late forties, the automotive industry has creatively rethought foreign obsolete designs. A vivid example of this is the ZIS-151, which was an unsuccessful tracing-paper from Studebaker. But after only a few years experienced, and later serial machines appeared, which in many respects had no analogues in the world. And the Likhachev plant was at the forefront of these changes.

Even before the opening in 1954, SKB factory workers tested the centralized tire inflation system. Engineers were not the first in the world with this development. In the USA, even during the war, a similar system was mounted on wheeled amphibians of the Marine Corps. Landing ships were delivered to the landing point in the holds of land boats, which, in turn, were located in marine self-propelled barges. Coming out of such a ship near the coast, the amphibian reached the land with the help of propellers and, having relieved the tire pressure to a minimum, rose to the swampy coast. As a rule, the Americans on land did not adjust the pressure in the wheels. 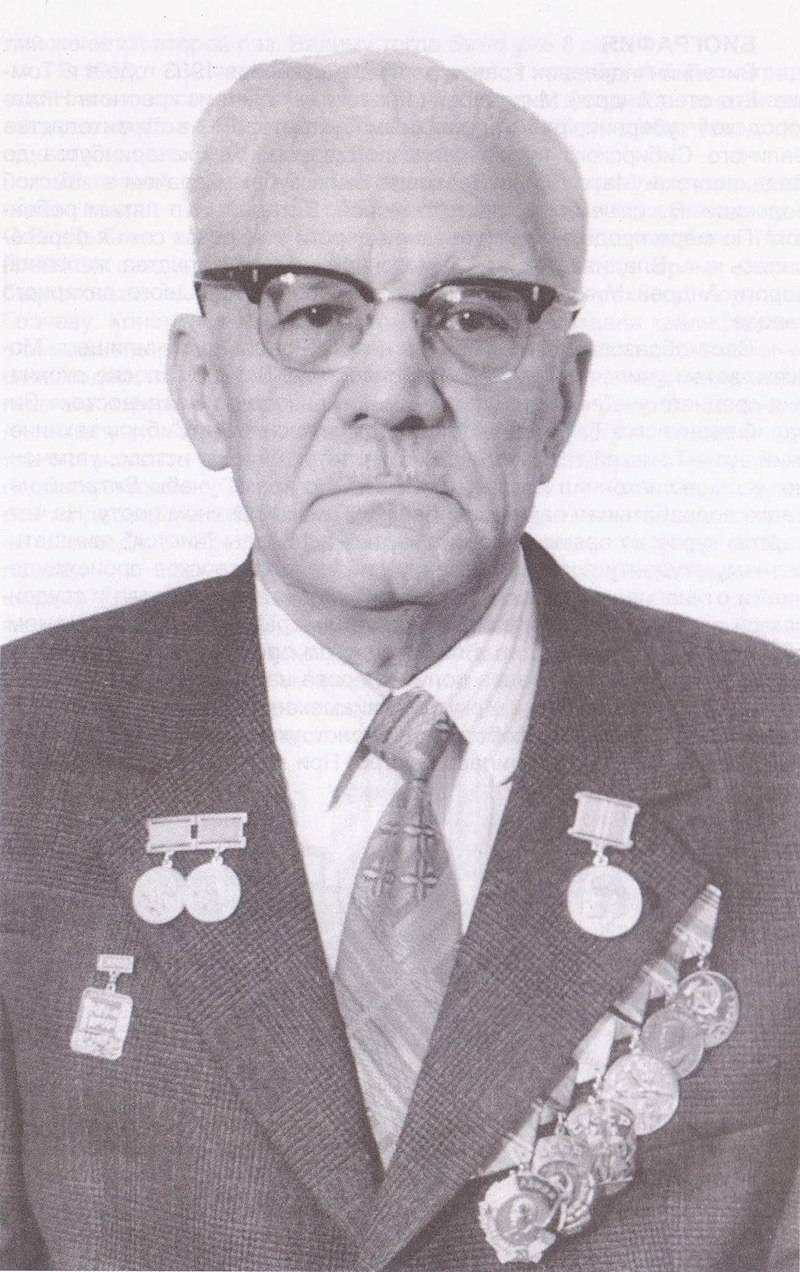 Grachev Vitaly Andreyevich, the famous Soviet automobile designer. Under his leadership at the ZIS, and later ZIL, the serial ZIS-485, ZIS-152V, ZIL-157, a series of ZIL-135 machines and a host of experimental equipment were developed. Source: wikipedia.org
A similar system was developed in the early 50s in the ZIS experimental workshop, but only to equip the ZIS-485 amphibian. When the idea came of installing swap on exclusively land equipment, the engineering headquarters of the plant was divided into two camps. Opponents believed that such a system was too heavy and complicated, and besides, pneumotubes and hoses sticking out could easily be damaged on a forest belt. Nevertheless, in an experimental procedure, the BTR-152 was equipped with pumping (the initiators were the legendary Vitaly Andreevich Grachev and his deputy Georgy Alekseevich Materov) and achieved comparative tests. Yes, not just tests, but in comparison with the T-34! In the winter of 1954, at a tank training ground in Kubinka, in the presence of the head of the GBTU, General Alexei Maximovich Sych (his attentive readers of VO remember on the cycle of articles about testing trophy equipment during the war) BTR-152 on flat tires twice in a row walked around a tank stuck in the snow. 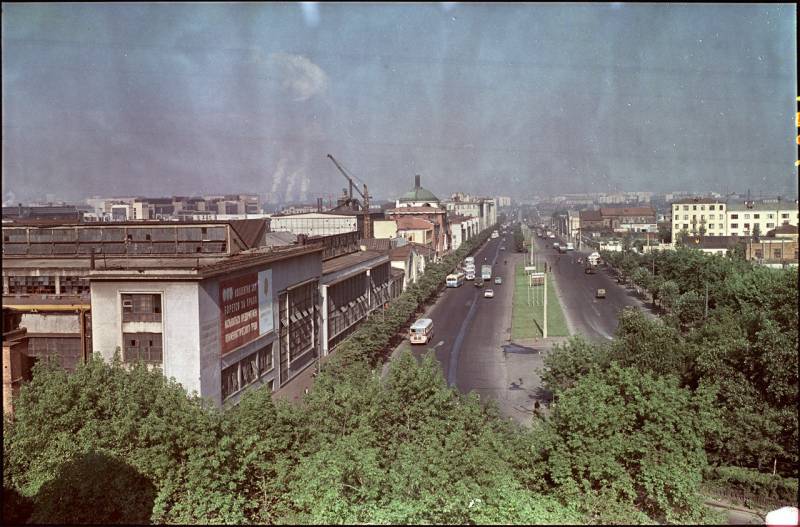 Moscow Plant named after Likhachev. Source: drive2.ru
Of course, such a failure of the famous tracked vehicle was more likely an accident, but, nevertheless, the experiment was indicative. However, this did not convince the management of GBTU of the need to equip the wheel equipment with similar centralized swap systems. Georgy Konstantinovich Zhukov saved the situation when he was personally convinced of the patency of such cars and actually forced the ZIS leadership to put the BTR-1954V conveyor with pumping in the fall of 152. You can read more about this fascinating test. in a series of articles about the ZIL-157. After such success, the appointment of Vitaly Andreyevich Grachev as the head and chief designer of the newly created SKB became logical.

Among the main tasks of the Special Design Bureau was the creation of a family of vehicles with an 8x8 wheel formula, performing the functions of an artillery tractor. These were heavier vehicles than the ZIS (ZIL) -157 being developed, which, recall, also belonged to the class of artillery tractors. The first prototype ZIL-135, albeit very distant, is a prototype ZIS-E134, dating from 1955. It was the first four-axle four-wheel drive truck of the Moscow automobile plant, largely unified with the ZIS-151 machine. 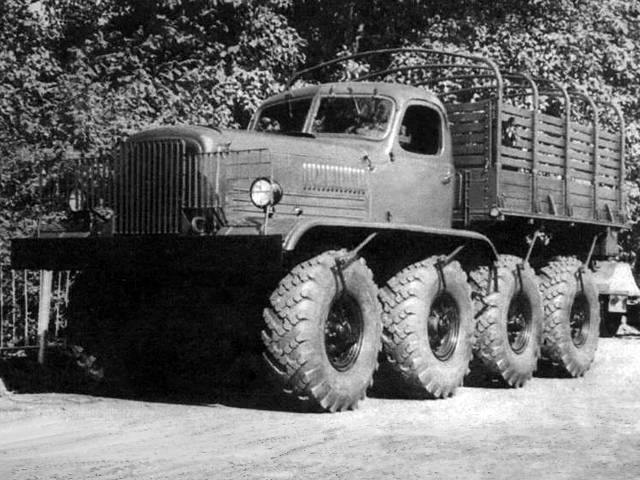 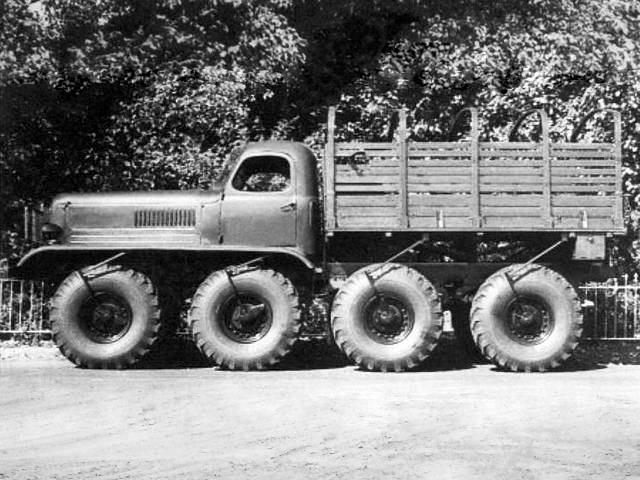 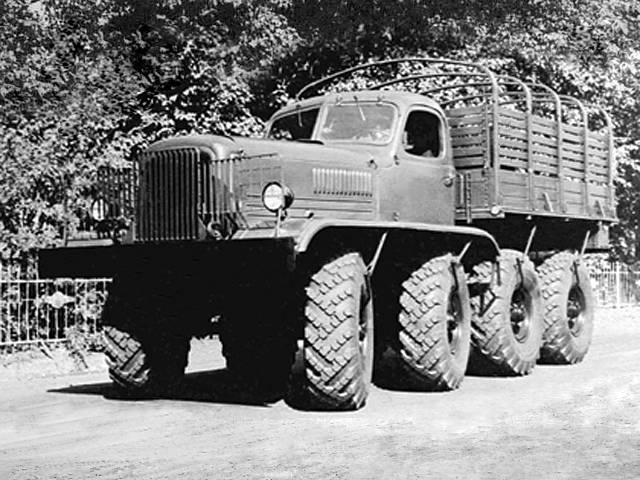 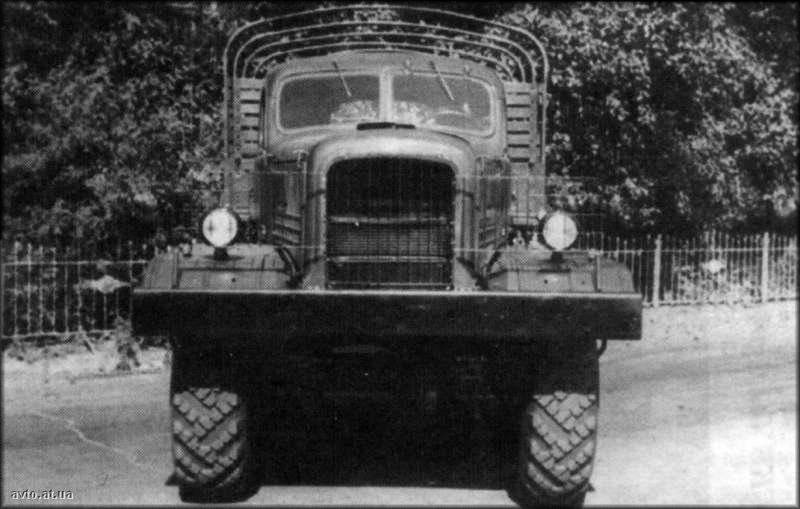 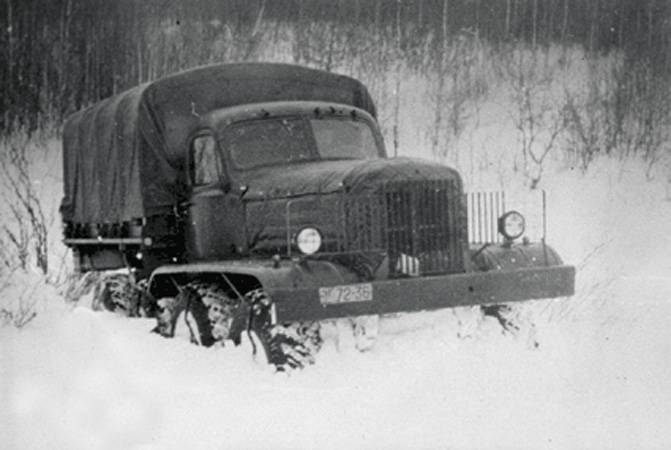 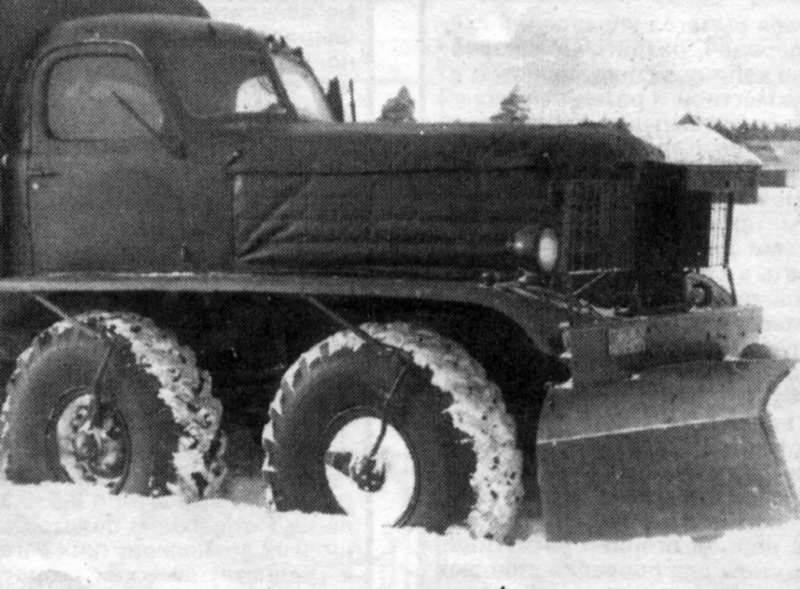 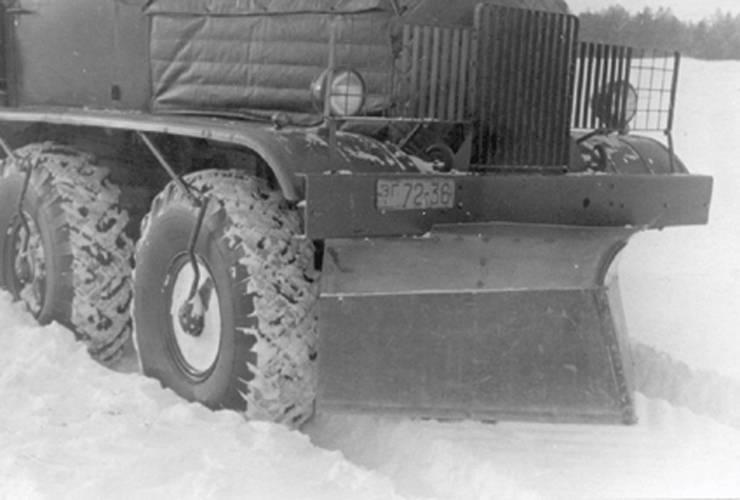 ZIL-E134. In the last two photos, the testers mounted a snow blade on the car - the traction capabilities of the machine allowed. Source: denisovets.ru
The designer Vitaly Grachev on this instance checked the very possibility of creating such a complex equipment on a domestic aggregate base. And it turned out, I must say, not bad. The chassis was four equally spaced bridges from the BTR-152V, of which the first two were steered. The frame and the cabin were borrowed from the ZIS-151, the wheel inflation system was taken from an armored personnel carrier. The appearance of the car was unusual: a long hood, under which was hidden an in-line six-cylinder 130-horsepower engine ZIS-120VK, and a short cargo platform. A torque converter from an experimental ZIS-155A bus was docked to the motor, and then a 5-speed manual gearbox was mounted. From the gearbox, the drive shaft transmitted torque to the transfer case, then two power take-offs distributed power to the 2nd and 4th, as well as to the 1st and 3rd axles, respectively. Engineers overturned the rear axle, so its drive was organized from the spurious gear of the power take-off. 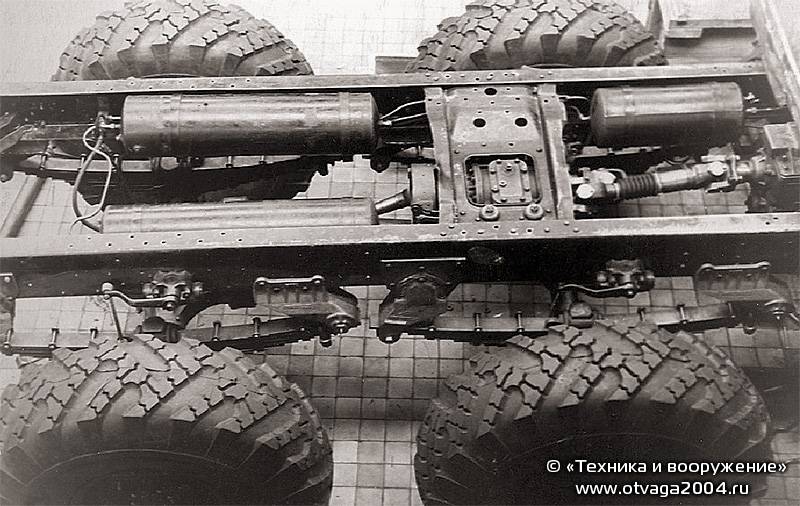 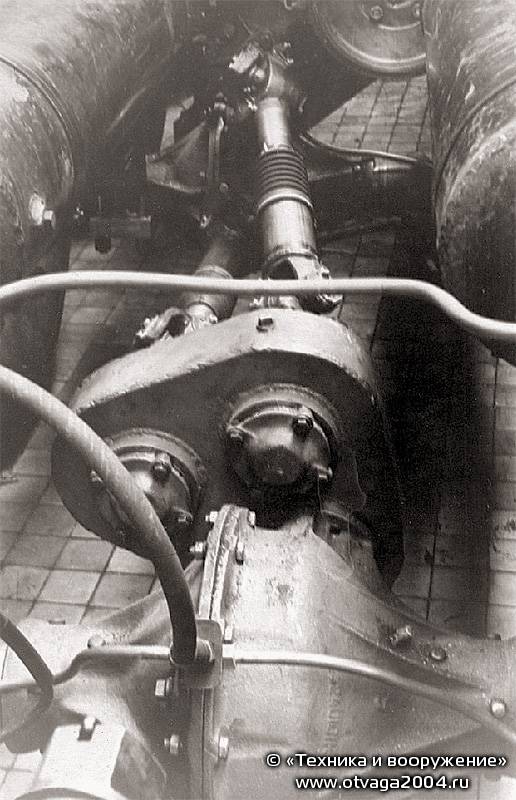 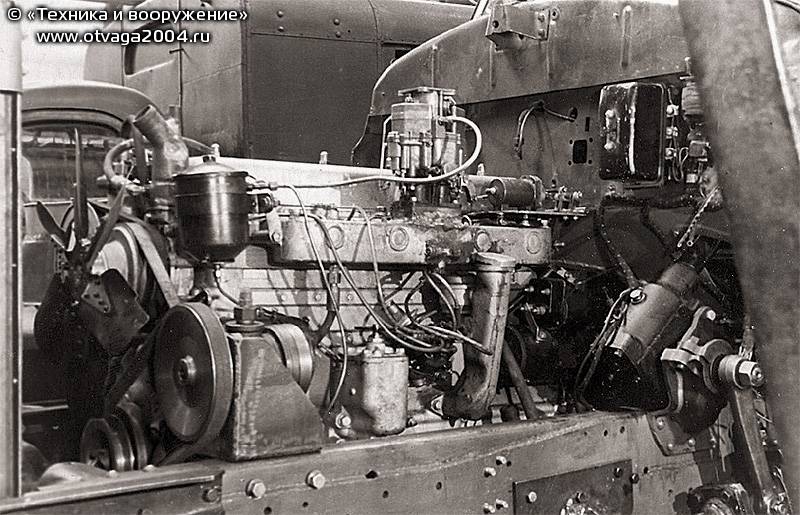 Footage from the tests of the first four-axis machine of the Moscow Automobile Plant and some knots close-up. Source: otvaga2004.ru
The resulting car in many respects was better than caterpillar equipment on the roads, while the speed, efficiency and, most importantly, the resource of the chassis were much higher. It is interesting that eight soft tires perfectly damped off-road bumps, so semi-elliptic springs with hydraulic shock absorbers practically did not work. This car, although it looked quite unusual for its time, was built according to the classic conventional patterns. However, the avant-garde thinking of the chief designer of SKB Vitaly Grachev led the ZIL engineers in a completely different direction in the future.

Unlike the official stories The Moscow Automobile Plant, now defunct, soaked only with good memories of a talented designer, has another point of view. Yevgeny Kochnev expressed it in the pages of his book Secret Cars of the Soviet Army. In his opinion, Vitaly Grachev, of course, a talented automobile designer, winner of two Stalin Prizes, even developed outdated designs for his time with a large number of programmed flaws. And if you can still agree with the latter provision (the ZIL-135 twin-engine scheme is an example), then the prototypes developed in the Design Bureau were not archaic. Grachev’s original and high-tech design solutions for the most part simply did not find much understanding either in the automotive industry or in the Soviet Army. The main competitor of the Zilovsky SKB was the Minsk Automobile Plant with its SKB-1, headed by Boris Lvovich Shaposhnik, the author of such machines as the MAZ-535 and MAZ-543. By the way, they were to a certain extent borrowed from the Americans. The more solid and massive construction of Minsk cars of a traditional layout turned out to be more reliable than Grachev's four-axis prototypes. For the first time, two SKBs were pushed together by the foreheads during the comparative tests of the MAZ-535 and the ZIL-134 artillery tractor (it is also called ATK-6). 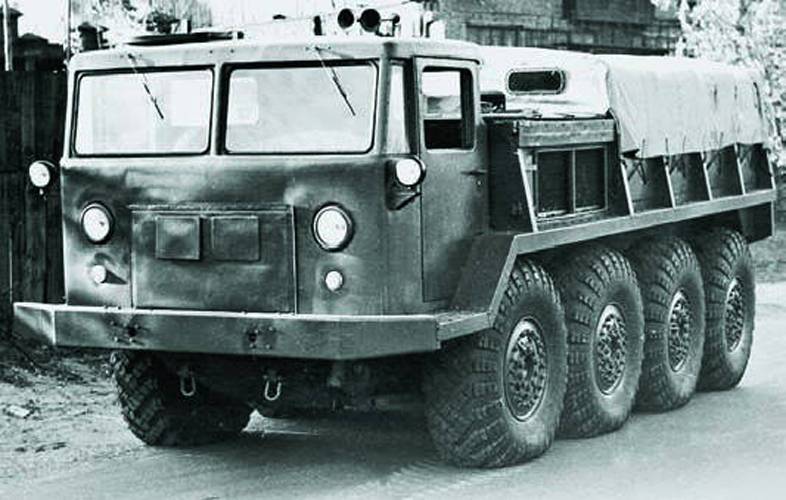 Experienced artillery tractor ZIL-134. If he had been accepted into service at one time, the evolution of Zilov’s all-terrain vehicles would have taken a completely different path. Source: denisovets.ru 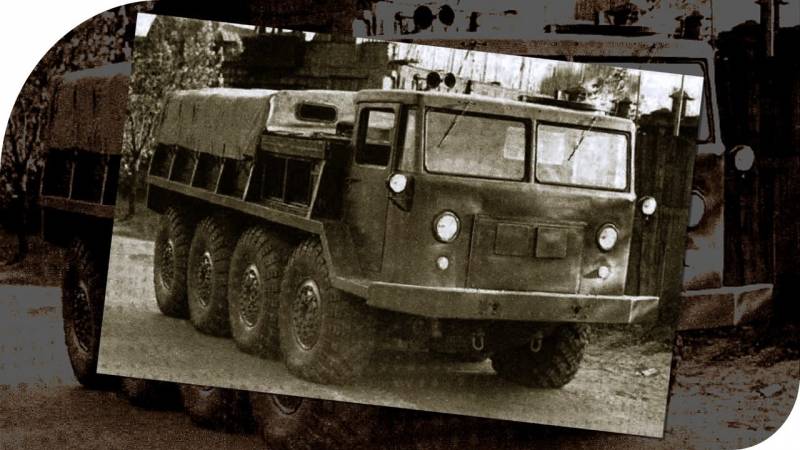 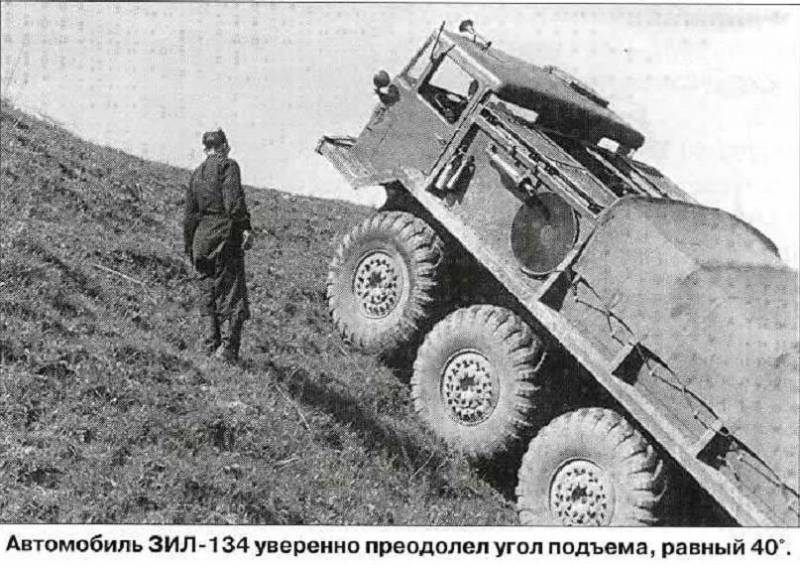 ZIL-134. Source: trucksplanet.com
Joint tests in 1958 in Bronnitsy, the Moscow prototype lost. The MAZ occupied the niche of heavy artillery tractors, tank and missile carriers for many years. What did the military not like in ZIL-134?

Firstly, the ZIL-E12 experienced V-shaped 134-cylinder carburetor engine was unreliable and often only worked on 10 cylinders. As you know, the Barnaul diesel D-535-A-12, which was a descendant of the tank V-375, was installed on MAZ-2. Why didn’t Vitaly Grachev put the same diesel on his car? There is still no clear explanation for this. Most likely, as an automobile engineer, he understood the limited motor resources of tank diesel. But there was no suitable engine of such power and I had to develop my own version. Moreover, it is carbureted, since there were even greater problems with the development of a diesel engine: they did not know how to do this at ZIL. Naturally, the design turned out to be crude and completely lost to the proven diesel engine from Barnaul. Secondly, the MAZ-535 was larger than its rival (more than 1,5 meters longer), more powerful and had a more robust construction. Although with a comparable carrying capacity of 7 tons, the ZIL-134 in the version of the airfield tractor was almost two tons lighter than the MAZ, and even knew how to swim. 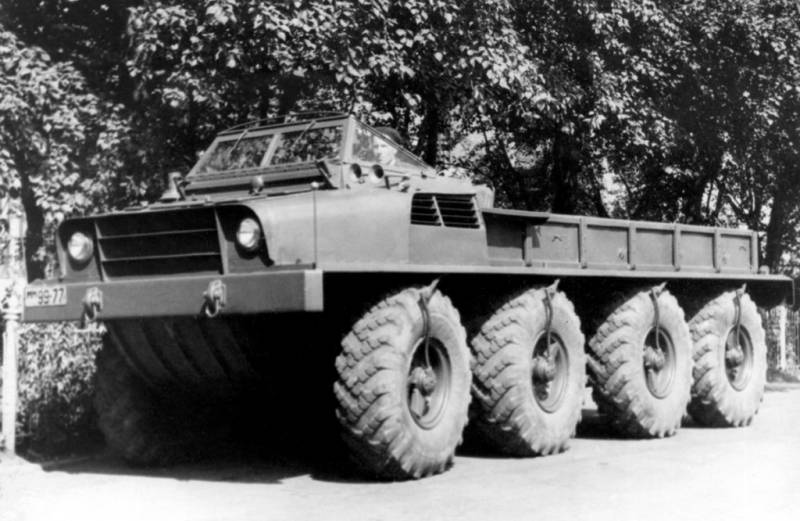 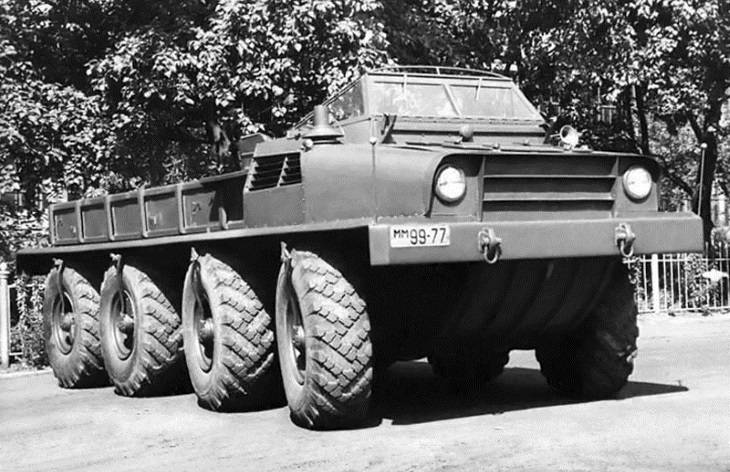 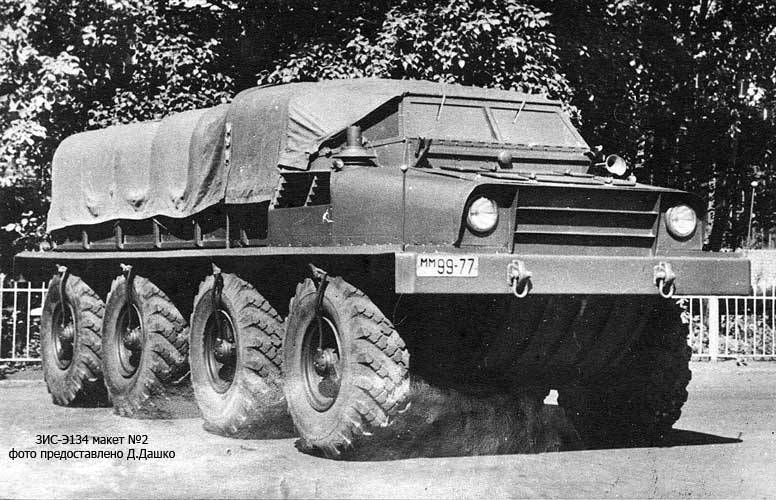 ZIL-E134 Layout No. 2 is a floating prototype in which the wheels are so far evenly distributed along the length of the hull. Source: autowp.ru

It is this machine, a late version of ZIL-E134 (model No. 2), that can be considered the real predecessor of the serial ZIL-135, which is still in operation. Source: the book "Overcoming the road: the development of SKB ZIL"
When Vitaly Grachev and his Special Design Bureau lost the competition of the Ministry of Defense, it was decided in the class of four-axle trucks to switch to the design of floating vehicles. By the way, the first ZIL-135, which appeared in 1958, was an amphibian with a very characteristic appearance. It was on this machine that a very rare layout solution with close wheels of the 2nd and 3rd pair appeared, which later became the hallmark of the Zilovsky missile carrier and the Uragan rocket launcher. But for the first time it was tested on late prototypes of ZIL-E134 No. 2 back in 1956.

This car had an open platform and a relatively short hood, a sealed body adapted for swimming, and a lack of suspension: there was hope for elastic wheels of reduced pressure. After the engineers did not like how the machine overcomes ditches and trenches, it was decided to lengthen the wheelbase. To do this, the front and rear bridges were bred further from the center, and the 2nd and 3rd bridge were left in their places. The problem of maneuverability was solved in a unique way - with steered wheels on the front and rear axles. The rear wheels rotated in antiphase front. Naturally, this seriously complicated the design of the steering, but when compared with the Minsk four-axle trucks, it increased maneuverability and reduced the number of ruts when turning on soft soils and snow. As a result, it was this technical solution that became decisive in choosing the layout of future 135 series machines.

Ctrl Enter
Noticed a mistake Highlight text and press. Ctrl + Enter
We are
Tractor of strategic purpose. MAZ-537: from Minsk to KurganMulti-axle rocket carriers
69 comments
Information
Dear reader, to leave comments on the publication, you must to register.