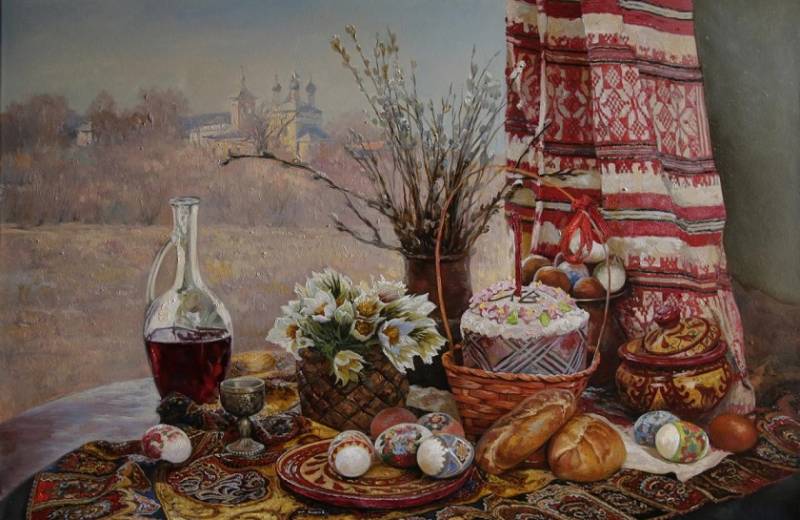 Orthodoxy has always been one of the pillars of the Cossacks. This is emphasized even by the fact that often the Cossacks were called "soldiers of Christ." Of course, behind the scenes Muslims came to the service of Cossack units, but often later they converted to Orthodoxy. One way or another, but the Orthodox holidays were the main for the Cossacks. Even the traditional New Year is not celebrated on such a grand scale as Christmas. And, of course, Easter, i.e. the day of the Resurrection of Christ was for the Cossacks an unusually significant holiday, for which they were preparing ahead of time. And, of course, he was surrounded by purely Cossack traditions and ceremonies.

Prepared for Easter very carefully. Mistresses didn’t just tidy up the house, but brought it to a state of crystal luster. Particularly zealous owners re-painted the walls and even updated the floors. All clothes were extended and tidied. If the Cossack family’s income allowed, the Cossacks ordered new Circassian and Beshmet, boots and leggings. They bought cloth for the faithful, from which they sewed elegant dresses for themselves. They did not forget about clothes for little Cossacks.

Before Easter, cattle were slaughtered so that skilled Cossack cooks could make the table delicious dishes. On Maundy Thursday (also called Maundy Thursday), all family members went to the bathhouse to steam the body to the bone. 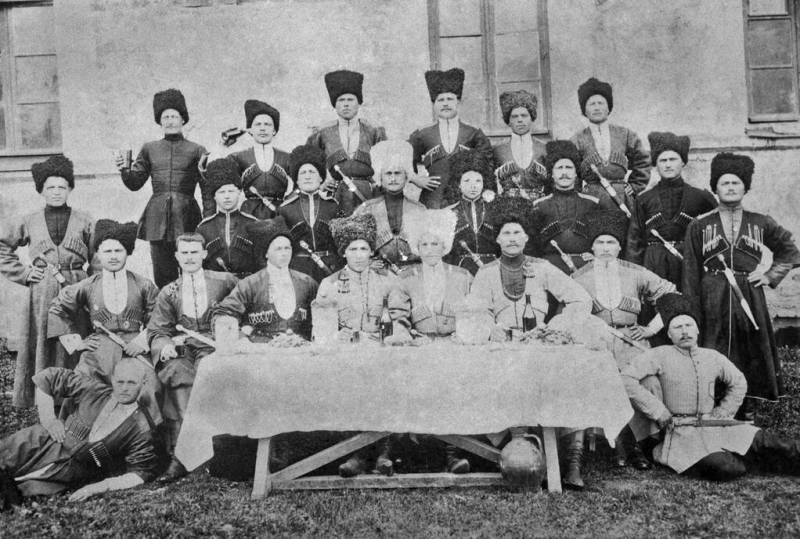 Easter celebration in the circle of comrades
Famous Easter cakes and cottage cheese Easter began to cook on Good Friday. On Easter cooking day, both children and adult Cossacks were sent out for a whole day from the hut, so that dashing fighters would not accidentally pour curses. The rooms should have been calm - rudeness, and even more quarrels were unacceptable on this day. Any attempt at conflict was usually extinguished by a senior woman in the hut.

Easter cake had to be tall and large, the top was decorated with cones, crosses, flowers, bird figures, smeared with egg white and sprinkled with colored millet. And, of course, painted eggs, both goose and chicken we are now familiar. The eggs were painted in different colors: red symbolized blood, Christ's sacrifice made for the sake of people, yellow - the sun, blue - the sky and water, and green - grass, life in its plant diversity. Of course, only natural dyes were used: onion husks, beets, chamomile broth, blueberries, elderberries, etc.

On the night of Saturday to Sunday, i.e. on Easter night, most Cossacks and Cossacks gathered for night service. Those who did not have enough space in the temple took places outside. By tradition, the Cossacks who remained behind the church walls made big bonfires. A "persecution of death" was arranged; such a fire was considered purifying. Old dried wood flew into the fire - broken wheels, cracked barrels, etc. Willow branches were also thrown into the fire, but not fresh, lively, but mortally dry, like the rest of the wood. 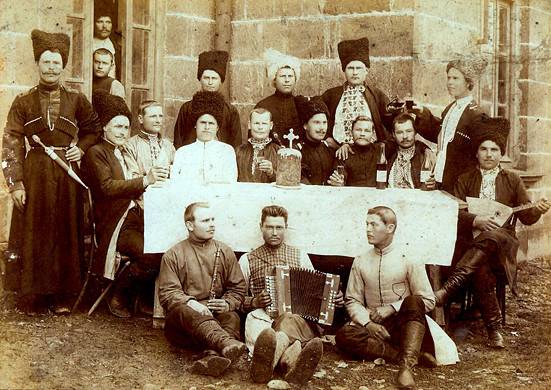 The entire population of the villages on Easter morning without fail went to the church in the morning - morning service. There was also a somewhat hooligan custom. Cossacks and Cossacks tried to climb the bell tower and at least once hit the bell. It was believed that this would bring happiness and prosperity. However, church officials were not particularly opposed to the custom, so almost the whole Sunday of the village was drowned in a bell ringing.

Now parishioners often bring not only Easter and Easter eggs, but also sausage, cheese and other products to the consecration of the temple. The priests are trying to convince that it is only Easter and eggs that are sacred, and the rest of the products are not kept in tradition. In fact, once the author saw with his own eyes how a young family, among other things, brought a whole pineapple with oranges for consecration, which looked somewhat fake. However, perhaps the desire to consecrate a whole feast comes from the Cossack antiquity.

So, contemporaries noted that the Cossacks did not bring some modest knapsacks for Easter consecration - they brought whole carts full of Easter cakes, Easter cottage cheese, eggs, home-made sausage, boiled pork, pickles and other dishes. There was a place for baked piglets stuffed with buckwheat with horseradish or apples.

Walking and a little "hooliganism"

After the consecration, a traditional feast and festivities began. The feast was unusually plentiful and Cossack hospitable. In addition to the above dishes, drinks occupied a special place. From soft drinks stood uzvar and kvass. Despite the desperately cultivated misconception that the Cossacks didn’t drink anything better than troubled moonshine in large bottles, the reality was the opposite. In addition to various varieties of vodka, from anise to orange, on the table were tinctures (kalganovka, cream, raspberry), mead, wine and even ordinary cognacs (brandy according to a confusing foreign classification). 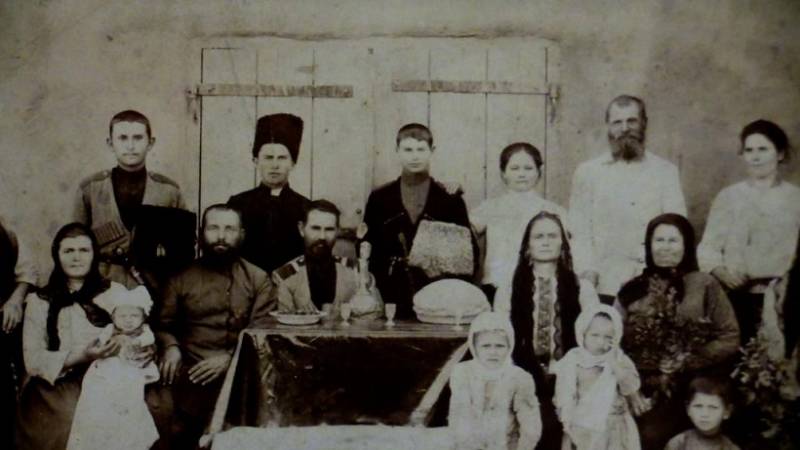 Terek, Don and Kuban Cossacks knew a lot about grapes so much that there is still a debate about whether they themselves cultivated wild grapes or used cultivated varieties. In this case, one thing is certain: Cossacks cultivated indigenous grape varieties like Terek scarlet, and not the ubiquitous cabernet and riesling imported from Europe. Most often, the so-called chihir was produced from grapes - young wine. Matured wine was called "parental". Sometimes Kizlyarka was distilled from the Chihir itself, i.e. cognac, but without exposure.

The most prosperous Cossacks could afford a bottle or two of sparkling Tsimlyansky, which was the favorite drink of the famous chieftain Matvey Ivanovich Platov. By the way, grapes of the Tsimlyansk black variety are autochthonous, so to speak, an aborigine of the places of the Don and Northern Black Sea coast. And contrary to the stereotype of antiquity and the unshakable role of France in sparkling wines, the production of Tsimlyansky alone by Cossack winemakers has more than 300-year-old roots.

Naturally, the Cossack way of life affected even the manner of drinking. Before overturning a glass of vodka or drinking a glass of wine, the Cossack put his elbow far forward. This is a purely cavalry habit. In order to "make friends" with his horse and earn his trust, the rider shared food with him, and then the horse involuntarily reached out to the rider when he decided to eat or drink water. Here the horseman put up his elbow to push the horse's face, and habit is the second nature even at the festive table. 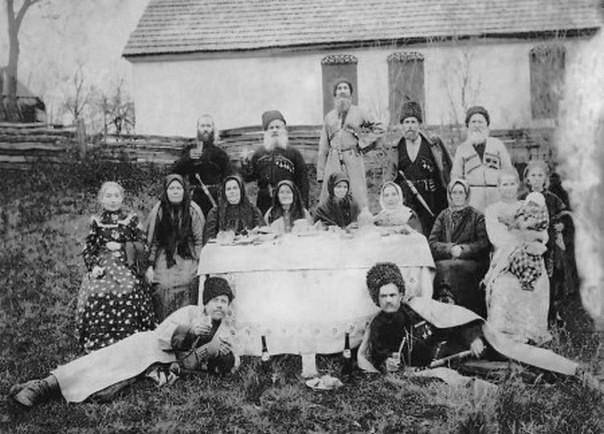 But the feast was not limited to a feast. In almost every village by Easter they built carousels or simple swings. At the same time, the carousel was a strong pillar, on top of which wheels were installed. Ropes with characteristic wooden handles at the end were tied to a wheel. Of course, after gatherings in the family circle, young people converged with their company, and married Cossacks - their own. Easter games were also different. Young people loved the “kissing” games, and also played round dances in which the guy and girl who liked, could meet. They played and "the ball." This game in some villages of the Caucasus often resembled hard rugby.

Easter was celebrated almost the whole week after Sunday, then you could allow yourself a little hooliganism. For example, among the Terek Cossacks the tradition was adopted of everyone who did not come on Monday morning to blame for weakness, and pour ice cold well water as a punishment, so that it was quick. There was a crafty side to this tradition. The accused Cossack could pay off a noble treat. As a result, the Cossack “punishment service” left the accused’s hut under a hop.

Surprisingly, some Terek and Kuban Cossacks, having captured Easter cakes and Easter eggs, crossed the Caucasian defensive line and went to the enemy’s auls. The Caucasian war was special, therefore, the Cossacks made kunaks both among the Circassians and among the Vainakhs. And to come to kunak with a hotel for a holiday, even if he does not celebrate it, was considered a common thing. The paradoxes of a long war ...

Ctrl Enter
Noticed a mistake Highlight text and press. Ctrl + Enter
We are
Cossacks in the Wehrmacht and the SSCossacks in World War II
58 comments
Information
Dear reader, to leave comments on the publication, you must to register.