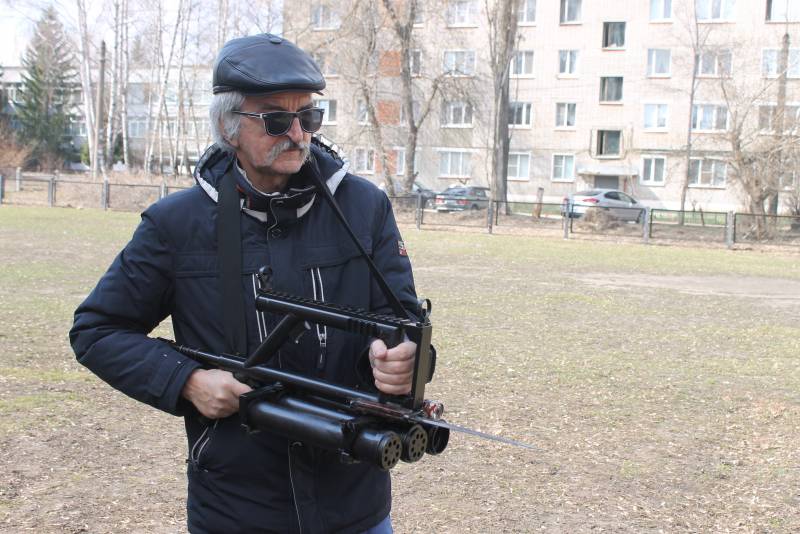 What kind of submachine guns you will not meet! Unusual patterns come across ...

Weapon the police. Previous material about the layout of a brand new submachine gun for the XNUMXst century police we ended up describing a cartridge representing a block of barrels with four charges per barrel. Eight trunks - 32 shots. That is a very decent ammunition. But do not forget that we have four additional mounting units for two more of the same cartridges. We attach them to the main mounting unit and in this way we can install as many as three cartridges on our submachine gun, that is, its total ammunition is now 96 shots, and this is more than any modern submachine gun has. 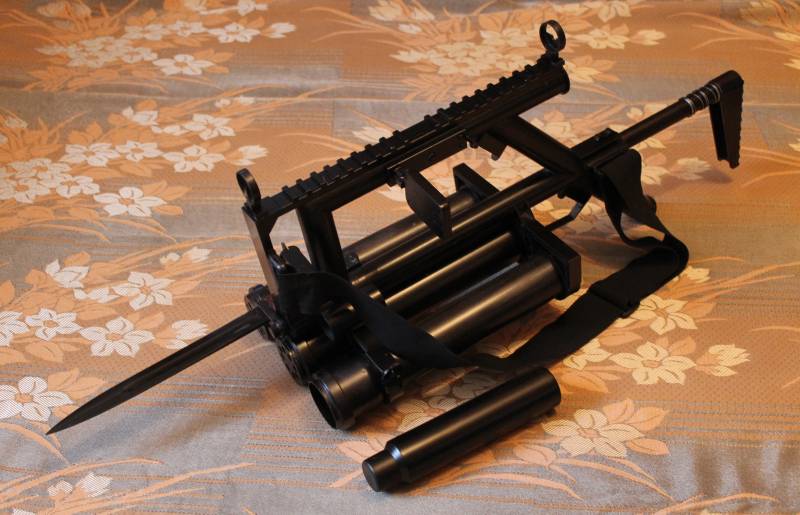 Photo 1. In this photo you see a submachine gun, equipped with three cartridges at once, with an attached bayonet, a tilted display and a grenade
But that is not all. The fact is that the first two mounts are connected to the main mount horizontally. But the two rear ones - vertically. And on the two front there are worm gears in four positions - 50, 100, 150 and 200 m. By turning the left and right toggle switches on the side mounting nodes, you can move the cartridges located on the sides so that they are aimed at the same place as the main one, central cartridge. That is, our submachine gun does not need a fire regime with a cut-off, say, three shots. When you press the shutter release button, depending on the fire mode selected on the display, you get three shots of three cartridges at the same time, six shots or nine. And accordingly, 3, 6 or 9 bullets are simultaneously flying at the target! In one shot! Or you water an enemy with continuous fire from all three barrels with a total rate of 3000 rds / min. But you can not reduce all three trunks at the same distance, but leave them fixed in parallel. And then you got as many as three ellipses of dispersion overlapping each other in the interval from 0 to 200 m. That is, it turns out that you will have the real "scythe of death" in your hands! 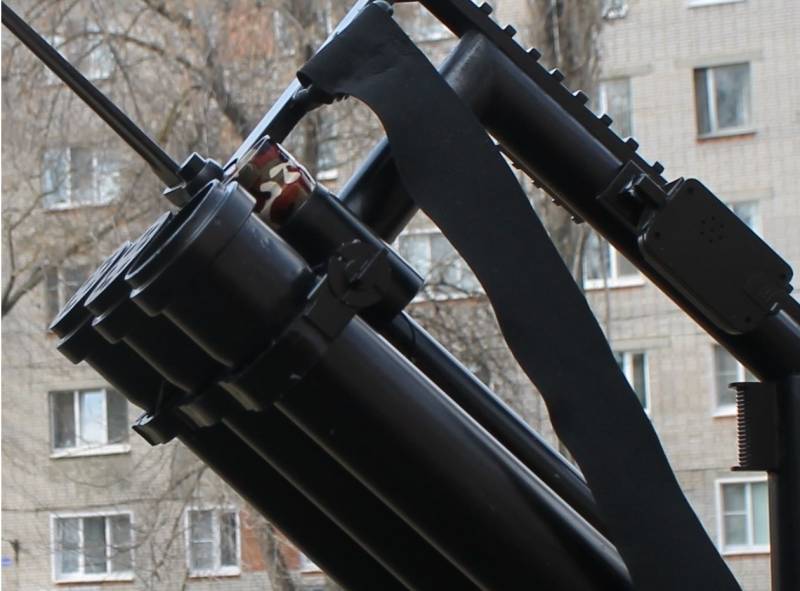 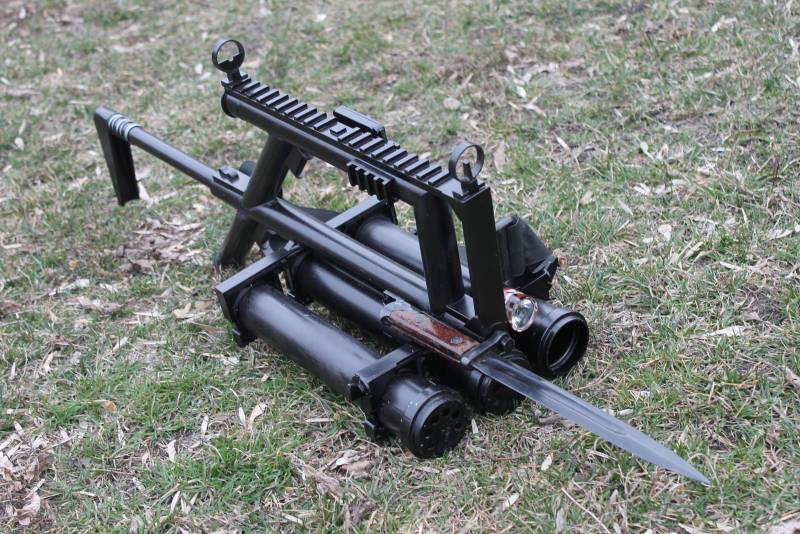 Photo 3. A submachine gun with three cartridges and an attached bayonet. Left view
But the policeman does not have to insert all three cartridge cartridges. In one of the mounts, he can insert a cartridge with a grenade equipped with tear gas, and in the other with seven plastic or rubber bullets. Again, all this will be reflected in the display. And the electronic unit will be configured so that in the first place it will always shoot non-lethal ammunition, and lethal - in the last turn. The grenades with which he fires, as already noted here, can be in disposable and fully ready-to-use cartridges. But it is also possible that the tube for firing grenades may not be plastic, but metal. Then it turns out like this: the “pipe” is separate, and the grenades (several pieces separately) and to them four propellant charges with microchips inside. He invested all four - the shot was fired at 200 m. He invested three - 150, two - 100 and, finally, one - the shot distance was 50 m. This variation is convenient because it allows you to effectively work on various targets. 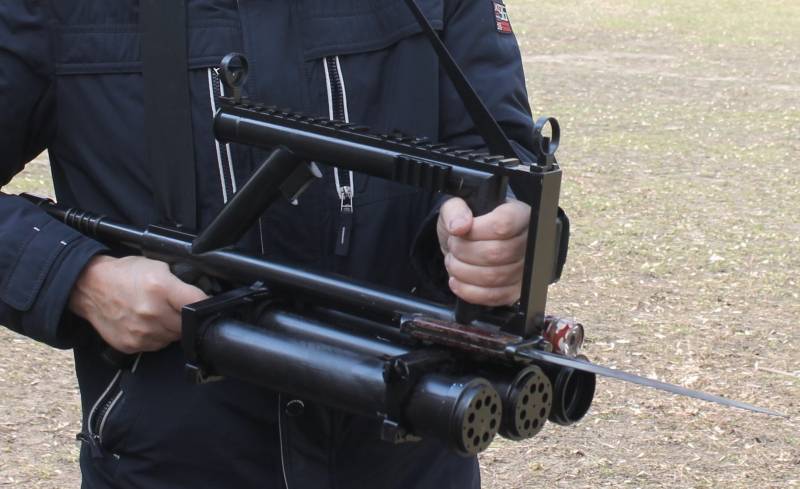 Photo 4. The upper-lower grip is demonstrated. So it’s very convenient to “water” the enemy “from the belly”! 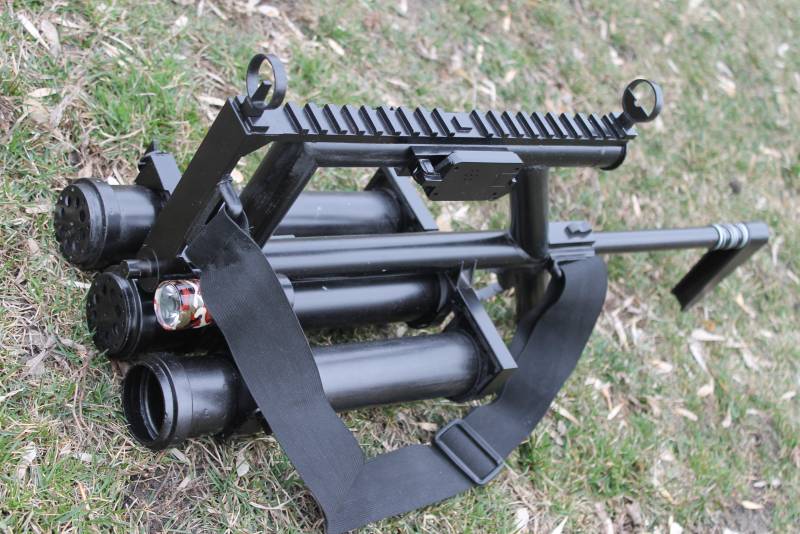 Photo 5. The bayonet, of course, by passing the need can be removed ...
Moreover, the range of ammunition for a grenade launcher mounted on this submachine gun can be extremely large. As already noted here, it can also be gas grenades (for example, with personnel equipment CR, CS, CN), fragmentation, filled with steel balls with a diameter of 5 mm, thermobaric, high-explosive, in a plastic case with pressed explosives, having a minimum fragmentation, but very strong explosive and noise impact, and smoke, filled with white phosphorus. The presence of a cartridge allows the use of fully equipped cartridge cartridges filled with illegal liquid damaging substances such as ASD, which is safe for humans (and indeed, strictly speaking, is a medicine), but has such a specific smell that few can tolerate it, especially in large doses. That is, inside the container is a piston, a powder charge and a microchip. At the signal of the control unit, it ignites the powder charge, the piston squeezes the liquid and the ASD jet flies out at a distance of about 25 meters. Similarly, cylinders can be equipped with indelible paint, pepper oil tincture and thickened gasoline mixed with white phosphorus, which makes it possible to use this submachine gun as a flamethrower too! Moreover, a bullet cartridge, a cartridge with one of the grenades, or, say, the same flamethrower, can be attached to it at the same time. 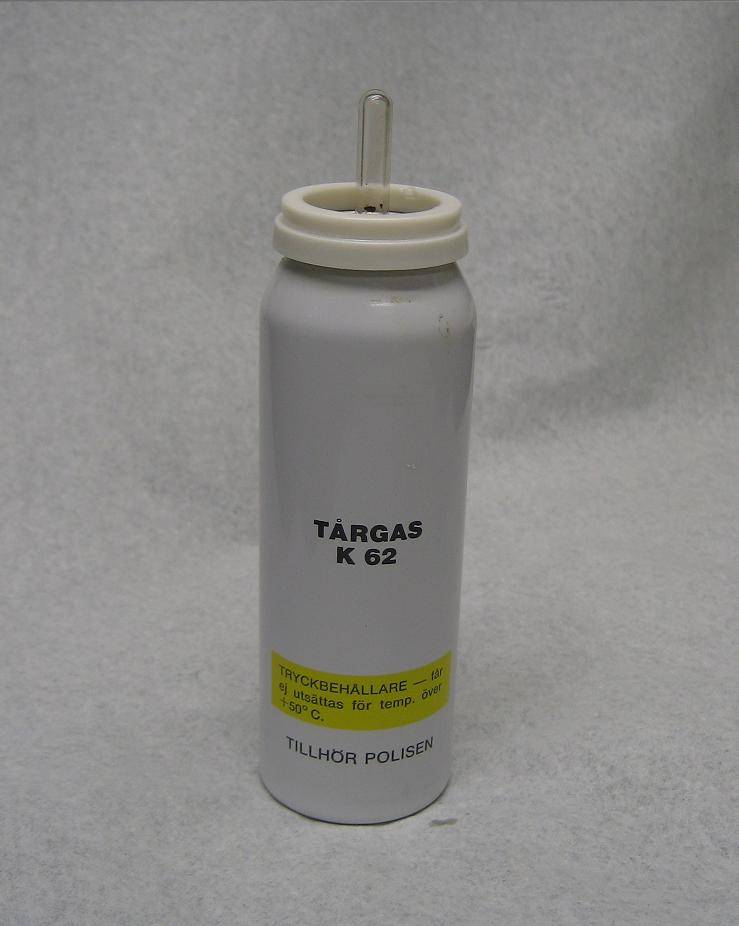 Photo 6. Swedish gas grenade M74 to the police grenade launcher
Of course, three cartridges on one frame mean significantly more weight weapons. It can be assumed that a conventional bullet cartridge will weigh no more than one and a half kilograms. And this is the maximum, but in reality even less. But let's take it to the maximum. By the way, the submachine gun body itself can weigh as much, along with batteries and a tactical flashlight, although the latter is removed and is not needed during the day. Thus, the total weight is 3 kg. With three cartridges, it can thus increase to 5–6 kg. However, it makes sense to attach all three cartridges to a submachine gun, and even with a bayonet, only in the most extreme circumstances. But they arise infrequently. 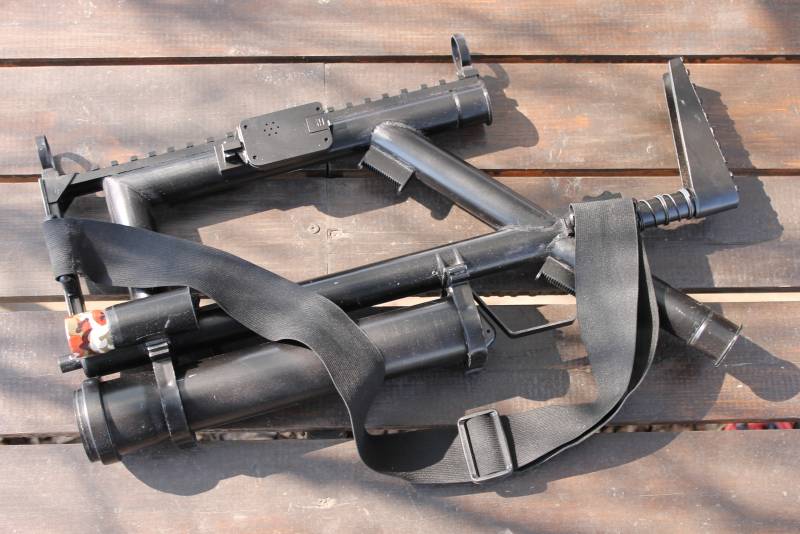 Photo 7. With one cartridge and folded stock, this submachine gun is a very convenient and compact weapon!
Another noticeable drawback of this submachine gun is that it cannot be fired from through the loopholes of military vehicles. However, experience shows that police officers usually do not shoot through them. Moreover, on many police armored vehicles today they are not even provided. Fire is conducted through open hatches, or using a machine gun turret. The crew of the car in this case usually controls the upper hemisphere and monitors the upper floors of the buildings, past which a police armored car passes. 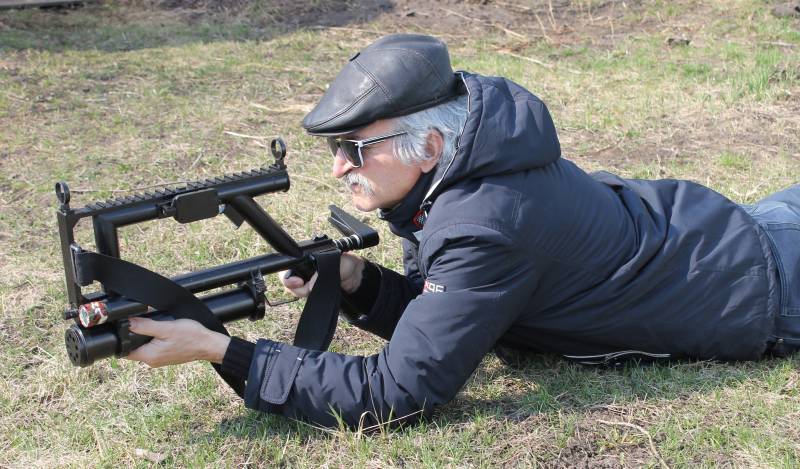 Photo 8. Shooting lying
At first glance, the inconvenience of shooting while lying is also caused by highly placed sights. However, in reality it only seems so. The fact is that the shooter has to raise the upper body anyway if he shoots with a submachine gun or submachine gun with the bottom position of the magazine (most of them are today!), And in this case, the high-mounted sight does not affect its increase, visible projection, so to speak. And besides, it is the police who rarely have to fire while lying down, this is still more the prerogative of the soldiers of the army units, who often have to fight “in nature”, while the battle in an urban environment has its own specifics! 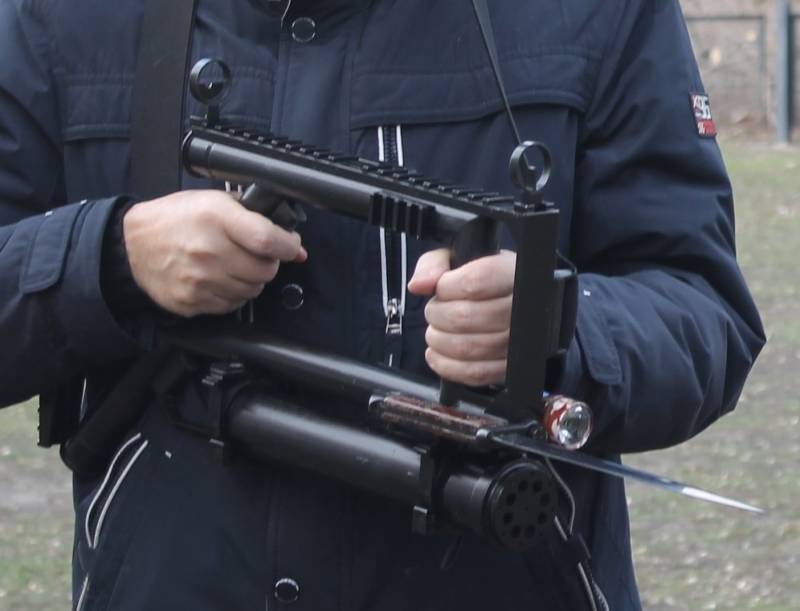 Photo 9. Upper grip. So it’s very convenient to act with a bayonet, including even with one right hand!
In this case, the ergonomics of the weapon is of greater importance, allowing its most varied grip related to the characteristics of the length of the arms and also the mobility of various joints. One grip will be convenient for someone, someone else. In this case, diversity is very important, as it makes it easier for a person to successfully "apply" to a weapon. 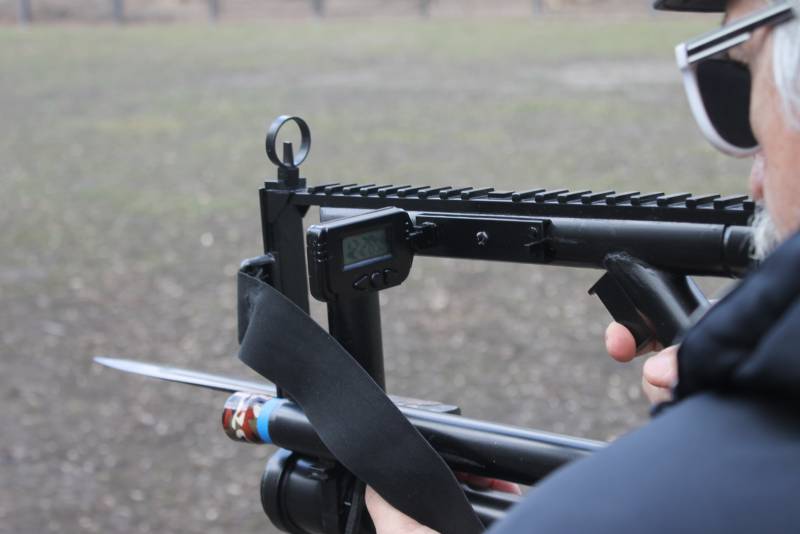 Photo 10. Upper-lower grip. The display of the control unit and its screen are clearly visible
Now let's imagine a hypothetical situation of police actions with such submachine guns against anti-constitutional elements on the streets of a hypothetical city. A signal arrives: masses of demonstrators trying to break into government buildings mobilized (this is shown by drones with cameras on board monitoring the situation) by specially trained “instigators”. It becomes obvious that one of the scenarios of the “color revolution” is being realized.

Police block the street with shields, while the second echelon, armed with submachine guns with non-lethal cartridges, fires at the demonstrators with gas grenades. Does not help! Using pre-prepared gas masks, illegal elements try to break through a police cordon. In response, a command is received to install additional cartridges on the weapon and open fire with plastic bullets of non-lethal impact, as well as to use cartridges with indelible paint and ADS liquid.

In response, unlawful elements activate force. Police officers fly railway nuts with tied fabric tails, home-made grenades from Pepsi and beer cans, bottles with Molotov cocktails, and darts from sharpened iron fittings. Then shots are fired, including from automatic weapons. On the part of the demonstrators, detachments of trained militants come into action. There is a danger of a breakthrough of police cordons. In stores, shop windows are broken, cars are turned over and set on fire. Arms stores were seized, and massive fire was opened on law enforcement officers. 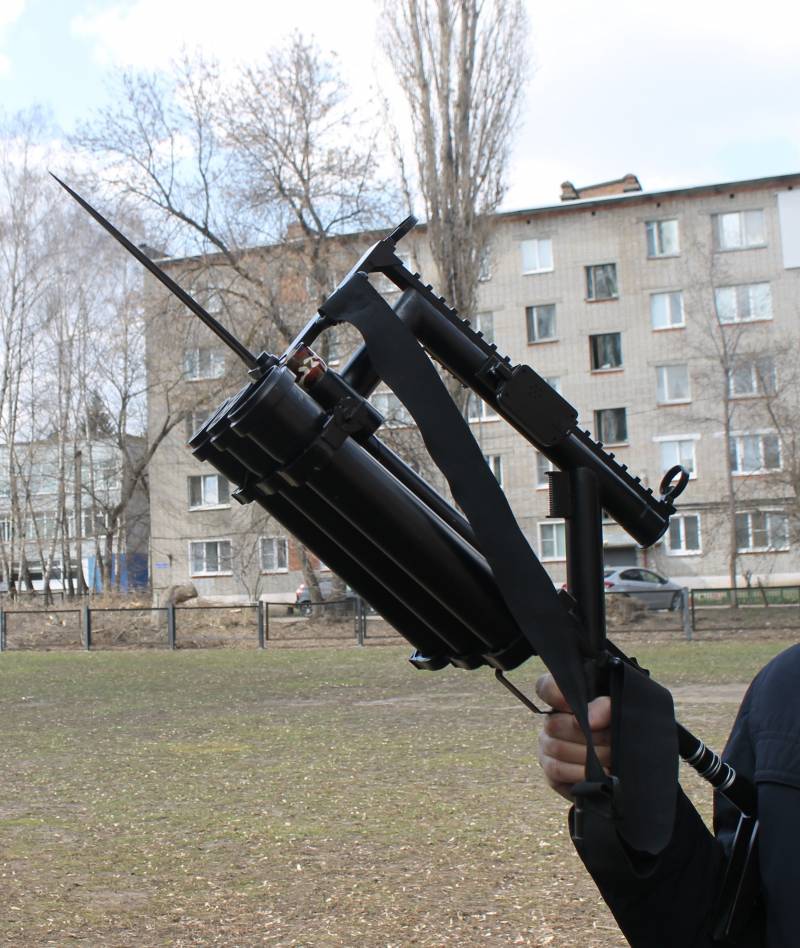 Photo 11. Who can resist this? None! From one appearance you can fool yourself!
There is a threat of direct rebellion and the destruction of the constitutional order. Under these conditions, the only possible decision is made: to respond to fire with fire. An order arrives: “Join the bayonets, install battle cartridges!” Police open heavy fire at the feet of the attackers and go on the attack. Snipers shot from the windows of the houses, but they were suppressed by massive fire and high-explosive grenades firing at the windows.

Police enter anarchy-ridden neighborhoods. Ahead of the barricade. It is set on fire by incendiary grenades and destroyed by HE. At firing points of illegal elements shoot fragmentation grenades. In hand-to-hand battles with the enemy, the police actively use bayonets and brass knuckles. As a result, the resistance of insurgents is completely suppressed. And they used a single type of weapon!

We are in Yandex Zen
Top 6 pistols 2018 of the year according to "Guns To Carry"
Victory weapons. "Degtyar Infantry" - machine gun DP 85 years
194 comments
Information
Dear reader, to leave comments on the publication, you must to register.