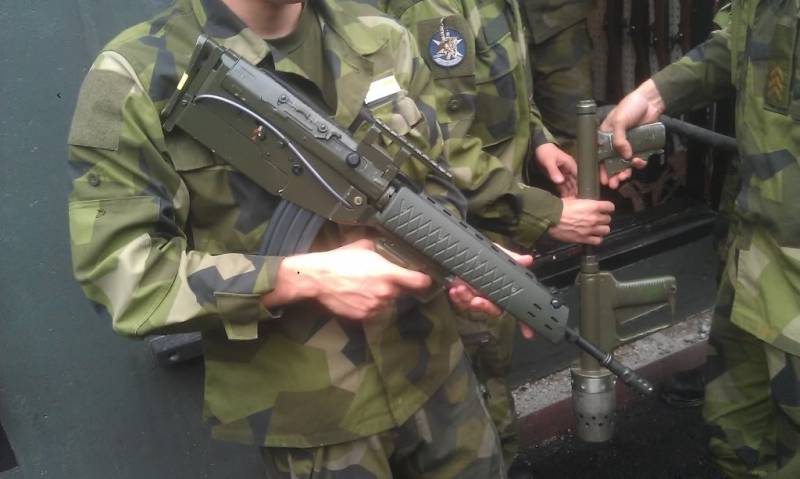 The only known photo of an experimental carbine

From the eighties the main infantry weapons The Swedish army is an automatic rifle / assault rifle Automatkarbin 5 or Ak 5. There are several modifications of this weapon with certain changes that affect the characteristics. At the same time, the general architecture of automata of all versions is no different. However, according to some reports, in the past there was an attempt to rebuild Ak 5 according to the bullpup scheme.

Unfortunately, almost nothing is known about one of the most interesting Swedish developments of recent years. Available data do not reveal the whole picture, and some of their features even allow you to suspect a joke or hoax. Nevertheless, in this case, the original Ak 5-based sample is of interest.

The existence of an unusual modification of the machine became known in 2013. Someone, under the nickname meo_swe, posted photos of museum weapons on the Klocksnack.se online forum. Among the well-known and familiar samples, an unusual carbine was present on them, resembling a modification of the serial Ak 5.

The author of the photograph indicated that this product was created at the beginning of the 5s. At that time, the Ak XNUMX modernization program was being implemented, and the Swedish gunsmiths intended to study the prospects of the bullpup layout. For this purpose, a prototype with a photo was made. No other information was provided. Moreover, since then no new details have appeared.

It is known that only existing modifications of the Ak5 traditional layout remain in service with Sweden. This suggests that an experienced bullpup machine did not show any advantages and therefore did not leave the test stage. The reasons for this are generally clear.

However, another version has the right to life. All история with an unusual carbine can be a hoax of one or another origin. Someone made a custom-made product from Ak 5 or its layout and “shared” it with the public. However, it is not known who exactly, when and why did this.

The only known photo of the mysterious carbine shows well the main features of the completed alteration. Its authors managed to save the bulk of the details of weapons; only individual units are newly made. Due to this, the total length of the weapon was reduced by a whole butt - approx. 260 mm.

Serial Ak 5 in the basic "long" version
The stock with the hinge, the pistol grip, as well as the trigger and its protective bracket, were removed from the serial carbine. Under the forearm placed the original frame with a pistol grip, a bracket and a trigger. Under the receiver, in place of the trigger guard, a new straightened casing appeared, accommodating the trigger.

In connection with the change in ergonomics, a new recoil pad appeared on the rear edge of the receiver. A soft cheek was placed on the left of the box. Behind the forearm on the box mounted bracket with a standard bar for the sight.

In an original way, the problem of the separation of parts of the trigger mechanism was solved. The main parts of the trigger have remained in place. The flag of the translator of fire did not begin to bear. The trigger extended forward was connected to the trigger using a flexible bowden cable. To avoid damage by moving parts, it was placed outside the receiver.

Removing the butt allowed to reduce the length of the carbine to 750 mm with a barrel length of 450 mm. The vertical and transverse dimensions remained the same. The mass of the structure, apparently, changed slightly. The weapon became easier due to the lack of stock, but it was immediately loaded with new parts.

Such alteration did not affect the design and principles of automation, did not affect the ammunition system, etc. Due to this, it was possible to quickly and simply complete a full-fledged technology demonstrator, suitable for the first evaluation of the bullpup scheme.

If the experimental carbine of the bullpup scheme was not someone's joke or hoax, the results of experiments with it are obvious. The Swedish army continues to use Ak 5 assault rifles of the traditional layout - it follows that the prototype did not show any advantages over existing weapons. Moreover, he could demonstrate serious flaws.

As a result, the experimental carbine (or carbines) was sent for storage, and the work on weapons of the bullpup scheme was stopped. A few years after these events, the prototype fell into the camera lens, and then gained fame in narrow circles.

Unfortunately, the authors of the project and the Swedish army are in no hurry to disclose data on an interesting project. However, even the available information allows us to imagine why the rebuilt carbine did not interest the army. He had not only advantages, but also disadvantages. Correction of the latter could overly complicate the project and deprive it of some of the advantages.

The carbine Ak 5D - a serial weapon of the Swedish army
The main advantage of the bullpup layout is its smaller dimensions with the same barrel length. It is also possible to win the accuracy and accuracy of the battle. Probably, an experienced carbine showed such qualities and could even bypass the basic model in some parameters. An important advantage was the maximum use of finished parts borrowed from Ak 5. In the long run, this made it possible to make new weapons by quickly and easily remaking cash.

At the same time, the bullpup layout leads to specific ergonomics. The center of gravity is not optimal, the moving parts and processes of the shot occur at a minimum distance from the shooter's head and hands, the replacement of the magazine becomes complicated, etc.

The bullpap version of Ak 5 also had several flaws of its own. So, the fire translator was left in the old place, which made it difficult to access. The connection of the trigger with the trigger using an openly located bowden reduced the reliability of the structure and could lead to fatal consequences.

It should be noted that all “their own” or “common” shortcomings of the experienced carbine could be corrected. However, this required a serious alteration of the entire structure, implying the replacement of a number of parts. In this case, the degree of unification with the serial model was sharply reduced - and one of the main advantages of the project was lost.

Apparently, the aim of the pilot project based on Automatkarbin 5 was to create a new small arms of reduced dimensions, as much as possible unified with the existing model. This experience was unsuccessful, and the modified machine did not enter service. The role of the “short” automatic weapon was retained by the Ak 5D serial carbine of the traditional layout.

Quite a lot is known about weapons of the Ak 5 family, but the experimental bullpup layout carbine remains an exception. It is hoped that the Swedish army in the future will decide to disclose data on this sample and confirm or refute existing versions. Unless, of course, it was a real development, and not a modern fake of unknown origin.