Hero of the Soviet Union at 23. Vasily Botylev 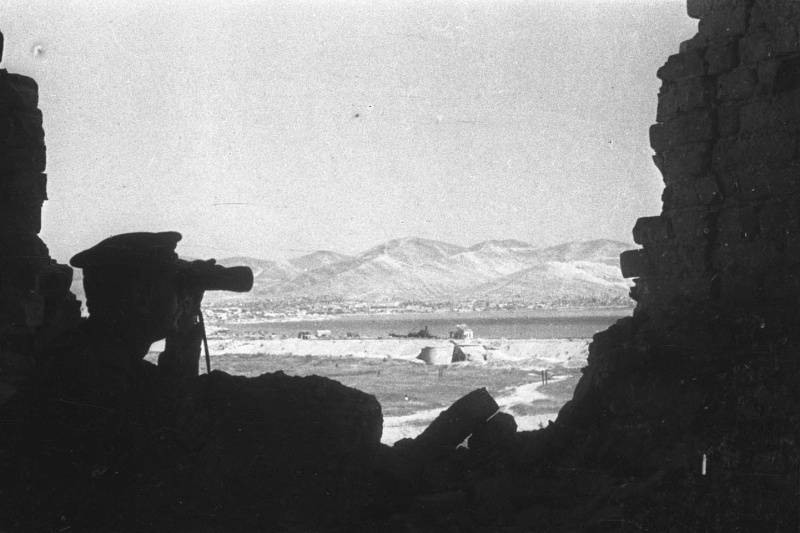 
By September 15, after five days of fierce battles in complete isolation from the main forces of the Soviet troops, the 393rd separate marine battalion of captain-lieutenant Vasily Botylev was bloodless. The Germans, who managed to break into the building of the club of sailors, which served as the headquarters of the battalion, were perceived, oddly enough, almost a gift. This is explained by the fact that the Nazi was usually sent to the next world with a dagger, and his weapon became a long-awaited trophy, because Botylev's fighters felt an acute shortage of ammunition. The situation was no better with medicines and provisions, but perhaps the most exhausting was thirst.

The thirst was so unbearable that they even drank something that turned a person inside out. So, the military commissar of the newspaper “Red Fleet”, Captain Lieutenant Nikolai Dobushev, found on one of the floors a dilapidated toilet room with two demolished walls, in which there was a rusty barrel with sour water, more like a slurry. Under the fire of the enemy, Dobushev made his way to this barrel and gained brown slurry, and then filtered it with all available means and watered the wounded.

For a breakthrough to their

Despite the difficult situation, Botylev’s battalion continued to seize new buildings. By September 15, soldiers of the 393rd OBMP owned a club, railway station, tank farm and elevator towers, where the company commander, senior lieutenant and future Hero of the Soviet Union Alexander Raikunov, showed miracles of courage and dexterity.

However, the paratroopers failed to create a single line of defense. They were forced to fight scattered enclaves. The second wave of the landing was also in fact in the same position. But the enemy also had to heat up their forces without the possibility of delivering a single blow to the landing. Meanwhile, fighters from the 55th Guards Rifle Division and the 318th Rifle Division made their way from the east to the paratroopers. 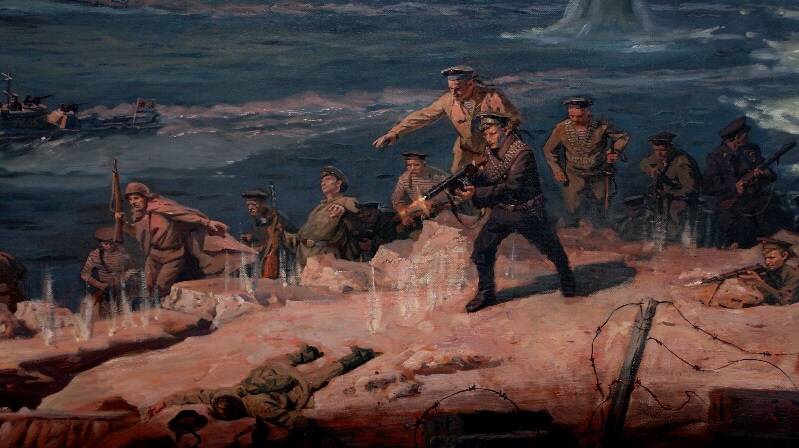 On September 15, the Botylev marines managed to connect with a detachment of troops of the 290th Rifle Regiment of the NKVD under the leadership of Lieutenant Colonel Ivan Vasilyevich Piskaryov, who later became the Hero of the Soviet Union. The internal troops of the NKVD, which landed at the Old Passenger and Elevator marinas, also had an extremely difficult time, but after joining forces, they became more confident in holding back their positions.

Soon, the small-land paratroopers and troops of the eastern side went on the offensive. In fact, the Novorossiysk-Taman offensive operation began, and the “Blue Line” (“Gotenkopf”, which means “Goth's Head”) of the German fortifications, as they say, gave the juice. Positions, which the Germans strengthened a little less than a year, stretching about 100 km of barbed wire and building more than five hundred pillboxes from Tsemess Bay and to the Sea of ​​Azov, cracked under the pressure of our troops. It was especially important to break the German resistance in Novorossiysk, because it was Novorossiysk that was considered the key to the German defensive line.

Towards the end of the unusually heavy September 15th, the guardsmen of the 55th Rifle Division of General Boris Nikitich Arshintsev broke through the German defenses and joined with the Botylev paratroopers and Ivan Piskaryov’s fighters. Later, Admiral Kholostyakov recalled how Nikolai Pavlovsky, the chief of the operations department of the 18th Army of the North Caucasus Front, burst into him and literally exploded with good news:

“United! Your sailors are in order, they survived! ”
Finally, even Field Marshal von Kleist realized that the port, like the entire city of Novorossiysk, had been lost to the Germans. And the question was not to take up defense, but how to retreat with the least losses. Just before dawn, the Nazis tried by all means to leave the "damn throat", as they called Novorossiysk. The admiral Kholostyakov with the first rays of the rising sun was the head of the coastal defense of the Novorossiysk naval base lieutenant colonel Mikhail Semenovich Malakhov and said sacramental words that they had been waiting for a whole year to hear:

“The Germans are fleeing from Novorossiysk! With my own eyes I see - they are running! ” 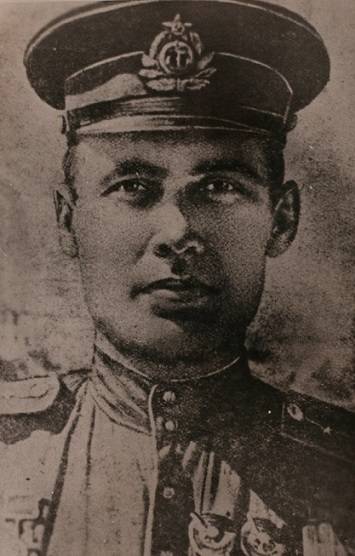 Vasily Botylev
On September 16, 1943, at 10 a.m., the hero city of Novorossiysk was completely cleared of the Nazis. The Nazis, fearing to be surrounded by Taman, were in a hurry to evacuate to Crimea. But the price of victory was high.


The banner of the Navy became a symbol of hard victory. fleet USSR, soaring above the monument to the Comintern next to the sculpture of Vladimir Lenin. This monument still stands in its rightful place in the port, despite the fact that in the 90s there were enough local correspondence fighters with the regime who wanted to demolish the monument. 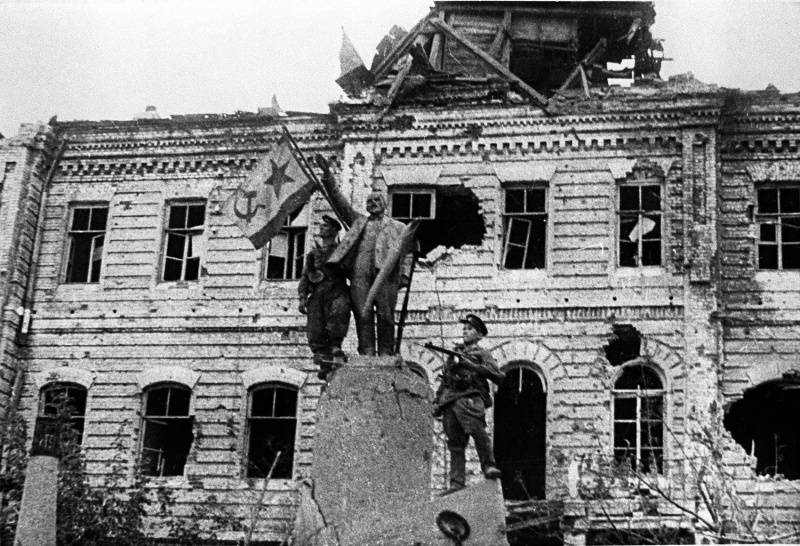 However, the joy of victory overshadowed by major losses. The 393rd Separate Marine Battalion irrevocably lost half of its former composition. The remaining half, including Lieutenant Commander Vasily Botylev, was wounded and mutilated. Immediate evacuation to the hospital of almost the majority of the paratroopers who survived the battles was required. But the first thing that the brave paratroopers asked when they met with the Arshintsev guards was water.

As soon as the Marines came to their senses a little after a constant five-day battle, they had to say goodbye to their comrades. In the battle, one of the best, if not the best, sniper of the entire North Caucasus fell - Philip Rubajo. Each battalion was ready to fight for such a master of sniper shooting, but now he was gone. 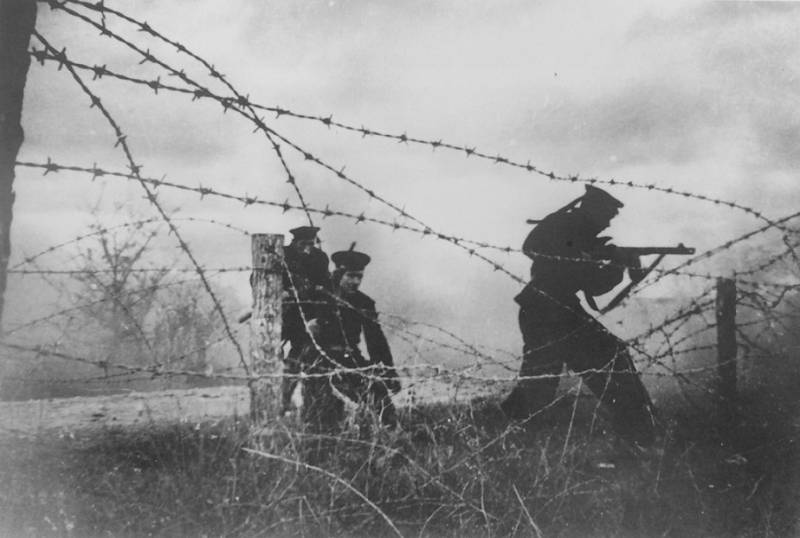 Ivan Prokhorov, 29-year-old foreman of 1 article, the hero of the first Kunikovsky landing, fell on the battlefield as a heroic death. One of the first to land, he led his platoon to storm the German pillboxes. After the destruction of one of the machine-gun calculations, Prokhorov discovered that the platoon had hit a minefield, and there were no more anti-tank grenades that cleared the passages. Petty Officer quickly realized that a lay-down platoon would be destroyed in a matter of minutes if the offensive was not continued, so he got up and rushed right into the minefield, clearing it with his own body. Vanya managed to blow up four enemy mines until he collapsed dead, scorched and tattered by shrapnel from head to toe. He was presented to the title of Hero of the Soviet Union, but there are no posthumous data on the award.

But the Marines experienced a particularly bitter sadness when they learned that Zhenechka Khokhlova, or rather, Evgenia Afanasyevna Khokhlova, was killed - a medical officer with the rank of chief foreman of the 393rd UMP, who was barely 22 years old. During the storming of the next building, Eugene broke away from the general group and continued to check the rooms, she was not the first time. In one of the rooms, the girl found three Fritz. Eugene in the blink of an eye fired at the Nazis line of machine guns. Two Nazis were immediately killed, and the third was lucky. The overweight German contrived to knock the machine gun out of the girl's hands and rushed to Zhenya, who grabbed the bastard by the throat. Fritz pulled out a dagger and hit the girl. He brought his hand for a second strike, but at that moment Comrade Khokhlova, the Red Navy Gromov, arrived in time. Gromov split the Nazi's skull with one blow of the butt.

Alas, Zhenya simply could not be evacuated in time. She held out for almost a day and died of blood loss. On a joyful and bitter morning on September 16, Eugenia's friends, fighters of the 393rd OBMP, Nadezhda Likhatskaya and Galina Voronina carried her body out for burial. The front went west, so there was little time. In a vacant lot not far from the port authority, a mass grave was dug;

Here's how Bachelor describes the first meeting with his marines:

“Botylev reports to the commander. Nearby are Starshinov, Raikunov, whom only today the fleet commander promoted to lieutenant commander ... I find the eyes of familiar elders, Red Navy men, rejoicing for everyone that is alive.

But many, very many are not. The airborne assault battalion lost more than half of its people killed and wounded (those wounded who managed to become operational are not counted). An hour ago, the Kunikovites buried in the mass grave their comrades who fell on the embankment. And how many more such graves ... "

The 393rd Separate Marine Battalion of Vasily Botylev was given the glorious name of the Novorossiysk. Almost immediately after the end of the fighting, a peculiar meeting of the command of the NLMB, the command of the Black Sea Fleet and the North Caucasus Front took place. Admiral Kholostyakov took part in it:

“We did not have time to look around at the port when L.A. Vladimirsky and I were demanded by Colonel General I.E. Petrov (commander of the SKF) - he also arrived in Novorossiysk.

- Well, which of your eagles represent the title of Hero? - immediately asked the front commander.

Personally, I did not expect that it would be necessary to solve this in such a hurry. There was no discussion with the fleet commander about this yet. But Ivan Efimovich was waiting for an immediate answer - he wanted to immediately transmit the performance to Moscow by telegraph.

Wanting, obviously, that everything went according to the authorities, L.A. Vladimirsky left me the first to name worthy. After thinking a little, I started:

“For the time being,” Ivan Efimovich smiled. 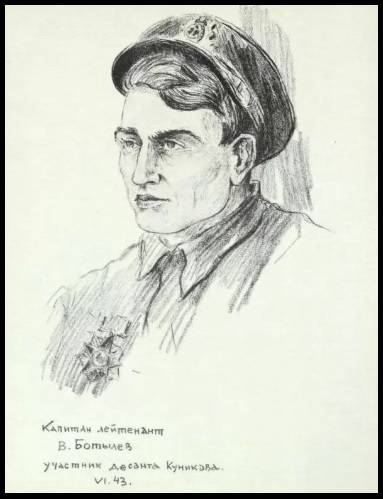 By a decree of the Presidium of the Supreme Soviet of the USSR of September 18, 1943, Vasily Botylev was awarded the title Hero of the Soviet Union. Botylyov by that time barely exceeded 23 years. After two continuous years of war, several injuries and slight shell shocks and stolen days of carefree youth, Vasily Botylev’s chest was decorated with the Golden Star, the Order of the Red Banner, the Order of the Patriotic War of the XNUMXst degree and other awards.

After the battles, the 393rd battalion was immediately sent for reorganization, since there were less than half of the soldiers left in it. The Marines received a kind of respite - until November 1943, the battalion carried out patrol service on the Black Sea coast based on Gelendzhik, and in December Botyleva was seconded to the People’s Commissariat of the Navy. 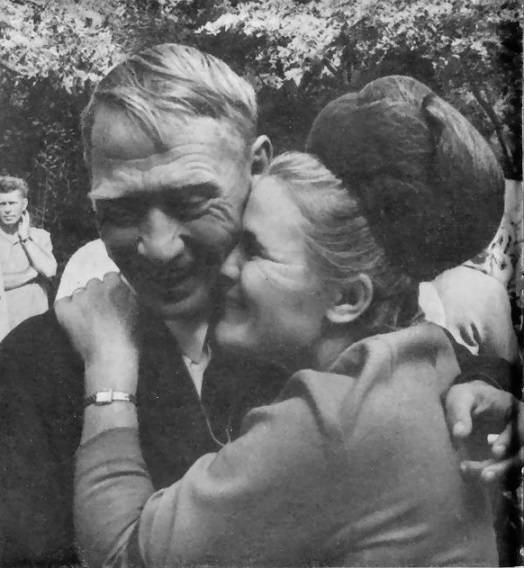 Vasily Botylev met with fighter of the Kunikovo detachment Nina Marukhno. 20 years later
After the Victory, Vasily Andreevich continued his service in the Navy, which he had loved since childhood. In 1949 he graduated from the Higher Officer Special Classes of the Navy and returned to the Black Sea coast. Seven years later, Botylev was forced to retire in the rank of captain of the 3rd rank for health reasons - injuries affected. But Basil, like almost all that generation, could not work, in principle. Therefore, in civilian life, he continued to work as an engineer at the Research Institute of Semiconductor Instrument Making.

Years of war, serious injuries, including to the head, affected health every day more and more. On July 20, 1970, Vasily Aleksandrovich Botylev died in Moscow. He lived only 50 years.

We are in Yandex Zen
Vasily Botylev. Calling fire on myself!
Vasily Botylev. On the way to the legend
11 comments
Information
Dear reader, to leave comments on the publication, you must to register.