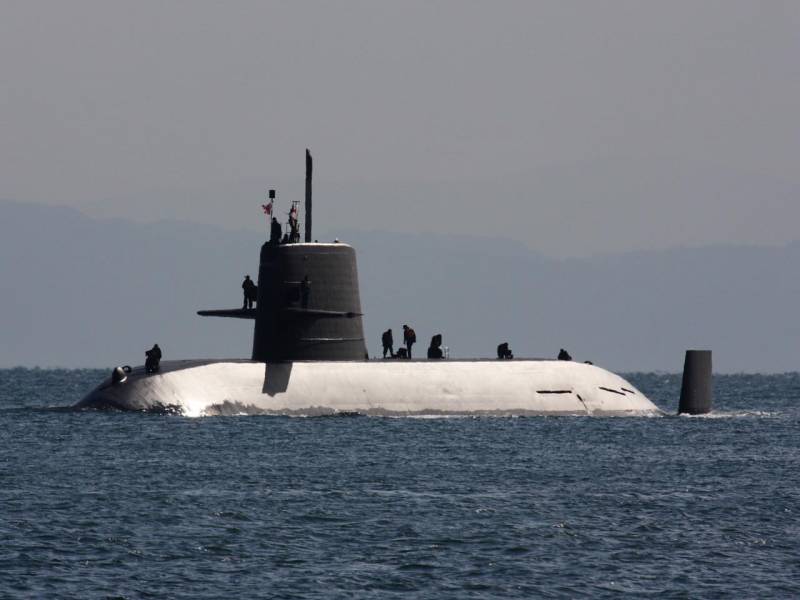 This article will focus on submarines with anaerobic or air-independent power plants (VNEU). VNEU is a very wide class of various engines, design solutions, types of fuel. What distinguishes it from the 3rd generation submarine propulsion systems is the ability to be in the underwater position for much longer, which significantly increases the secrecy of such a submarine and makes it difficult to detect anti-submarine aviation. Submarines of the previous generation, for example, a diesel-electric submarine of Project 636 Varshavyanka, should rise to the surface every 3-4 days, turn on diesel engines and recharge the batteries. Modern submarines with VNEU can be under water for weeks.

Stirling engine - a heat engine in which the working fluid in the form of gas or liquid moves in a closed volume, a type of external combustion engine. It is based on the periodic heating and cooling of the working fluid, with the extraction of energy from the resulting pressure change. Typically, air acts as the working fluid, but hydrogen and helium are also used.

1. Bulkiness and material consumption: the Stirling engine needs to be cooled, and this leads to a significant increase in the overall dimensions of the power plant due to the increased radiators.

2. To obtain characteristics comparable with the characteristics of ICE, it is necessary to apply high pressures (over 100 atm) and special types of working fluid - hydrogen, helium.

3. Heat is not supplied directly to the working fluid, but only through the walls of the heat exchangers. The walls have limited thermal conductivity, which is why the efficiency is lower than might be expected. A hot heat exchanger operates under very intense heat transfer conditions and at very high pressures, which requires the use of high-quality and expensive materials. Creating a heat exchanger that would satisfy conflicting requirements is a very non-trivial task. The larger the heat transfer area, the greater the heat loss. This increases the size of the heat exchanger and the volume of the working fluid that is not involved in the work. Since the heat source is located outside, the engine slowly responds to changes in the heat flux supplied to the cylinder, and may not immediately give the desired power at startup.

4. To quickly change the engine power, methods are used that are different from those used in ICEs: a buffer capacity of a variable volume, a change in the average pressure of the working fluid in the chambers, a change in the phase angle between the working piston and the displacer. In the latter case, the response of the engine to the control action of the driver is almost instantaneous.

1. Simplicity of design - the engine design is very simple, it does not require additional systems, such as a gas distribution mechanism. It starts independently and does not need a starter. Its characteristics allow you to get rid of the gearbox.

2. The increased resource - simplicity of design, the absence of many "delicate" nodes allows the "stirling" to provide an unprecedented margin of health for other engines in tens and hundreds of thousands of hours of continuous operation.

3. Profitability - for the recovery of certain types of thermal energy, especially with a small temperature difference, "stirling" is often the most effective types of engines.

4. Low noise level - “Stirling” has no exhaust from cylinders, which means that its noise level is much lower than that of piston internal combustion engines. 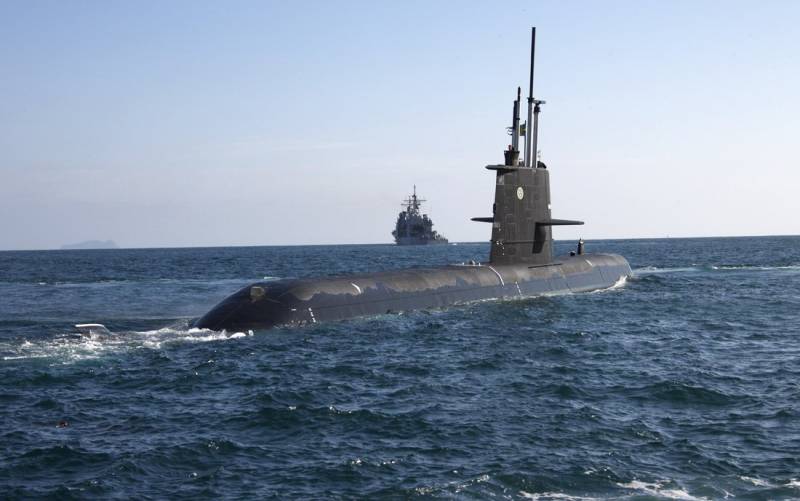 DEPL type "Gotland"
Submarines with Stirling engines use standard diesel and liquid oxygen as an oxidizing agent. The pioneers in the creation of VNEU with "Stirling" were the Swedes. Their submarines of the Gotland type were the first production submarines with similar engines. I must say that the "stirling" inferior to modern diesel engines in power, so they are used as an addition to the classic diesel-electric power plant. However, this “supplement” allows the Gotland submarine to be under water for up to 20 days. Stirling speed - 5 knots. In addition to the Swedish submarines, Stirling engines are used on Japanese Soryu submarines.

Another type of VNEU is ECG. The electrochemical generator is based on fuel cells. In fact, it is a rechargeable battery with constant recharging. The principle of operation of a power plant with an electrochemical generator is the same as 150 years ago, when the Englishman William Robert Grove accidentally discovered during electrolysis that two platinum strips, blown by one with oxygen and the other with hydrogen, placed in an aqueous solution of sulfuric acid, give current . As a result of the reaction, in addition to electric current, heat and water were formed. In this case, the energy transformation occurs silently, and the only by-product of the reaction is distilled water, which is quite easy to find application in a submarine.

According to the criteria of efficiency and safety, it was decided to keep hydrogen in a bound state in the form of a metal hydride (a special metal alloy combined with hydrogen), and oxygen in a liquefied form in special containers between the light and strong submarine hulls. Between the hydrogen and oxygen cathodes are polymeric electrolyte proton exchange membranes that perform the function of an electrolyte. 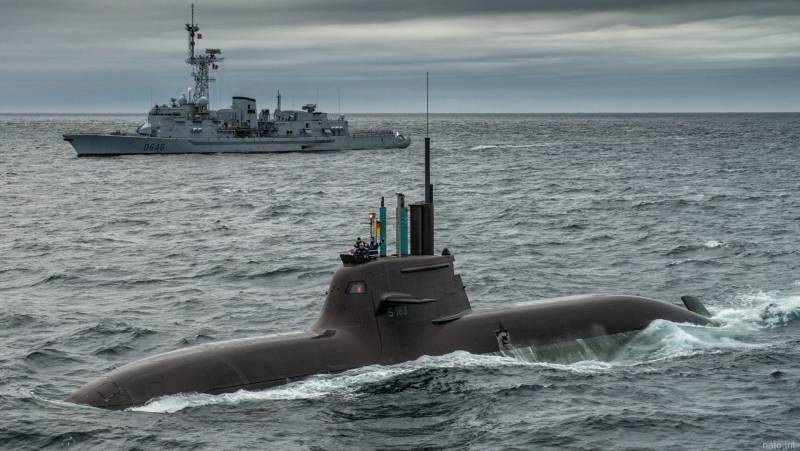 DEPL type 212
VNEU with ECG found application on German submarines of type 212. Despite the obvious advantages of the developed fuel cell installation, it does not provide the required operational and tactical characteristics of an ocean-class submarine, primarily in terms of performing high-speed maneuvers when pursuing a target or avoiding an attack the enemy. Therefore, submarines are equipped with a combined propulsion system, in which batteries or fuel cells are used to move at high speeds under water, and a traditional diesel generator is also used to float above the surface, which is also used to recharge batteries. The electrochemical generator, consisting of nine modules of fuel cells, has a total capacity of 400 liters. from. and provides movement of the boat in underwater position with a speed of 3 knots for 20 days with noise levels below the level of natural noise of the sea.

More recently, the Spaniards on submarines of the S-80 type achieved success in creating VNEU. They also used ECG as an anaerobic ancillary equipment, however, they took the path of producing hydrogen from ethanol as a result of its decomposition. Oxygen is stored in liquid form in a special tank. The duration of a submarine’s stay under water reaches 15 days. 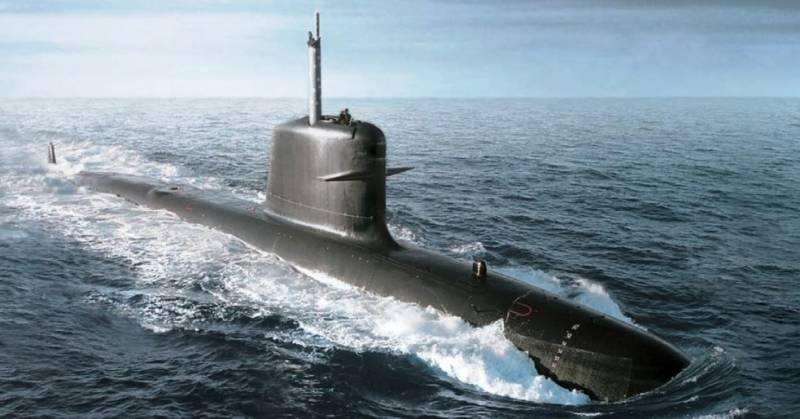 DEPL type "Scorpion"
French engineers created the MESMA (Module d'Energie Sous-Marine Autonome) steam generator anaerobic unit, an autonomous energy module for submarines. MESMA uses the principle of the Rankin cycle, which consists of the processes of heating a liquid, its evaporation and superheating of a vapor, adiabatic expansion of a vapor and its condensation. The installation is based on a steam turbine operating in a closed cycle. Ethanol is used as fuel, and oxidizer is liquid oxygen. Ethanol enters the combustion chamber, into which oxygen also enters already in a gaseous state. The combustion temperature of a mixture of alcohol and oxygen can reach more than 700 ° C. Ethanol combustion products - water and carbon dioxide, high pressure of carbon dioxide emitted (up to 60 atmospheres) make it easy to remove it overboard without using a compressor at depths up to 600 m.

Waste steam enters the nickel-aluminum-bronze condenser, which is also a secondary circuit cooler. The condenser is cooled by running seawater. The resulting condensate is returned to the steam generator. The total amount of water in the steam-condenser system is about 500 liters. Steam turbine rotation speed up to 10 thousand rpm. The rated output power of the generator is not less than 200 kW.

The power of the MESMA installation allows developing submarines of the Scorpena project with an underwater passage of 4 knots, with a sailing duration of about 250 hours. Traditional batteries are used to achieve higher speeds.

On March 2020, 11, the Japanese launched the XNUMXth submarine of the Soryu project, but this submarine has a significant difference from other submarines of this type - lithium-ion batteries are installed on it.

Through the use of lithium-ion batteries, the Japanese were able to abandon the use of both Stirling engines and traditional lead-acid batteries on the new submarine.

VNEU in the Russian Navy 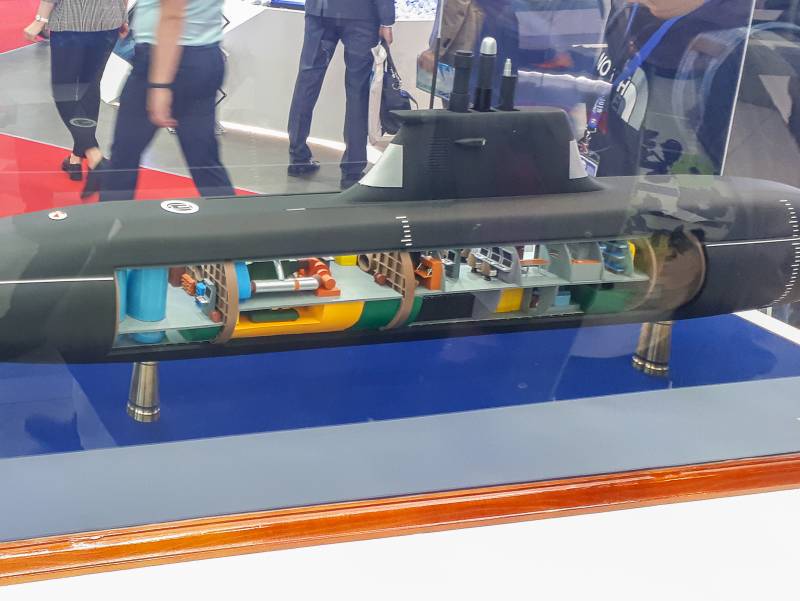 Model 750B submarine
Of course, the main issue for us is the situation with anaerobic engines for submarines in Russia. How are we doing? Unfortunately, our developers have not yet achieved success in creating VNEU. The first Russian diesel-electric submarine with VNEU was supposed to be the submarine of project 677 Lada, but things went wrong. Nevertheless, work on the creation of a VNEU is ongoing and in 2019 a new research and development department on this topic was opened.

The development of Malachite is a single gas turbine engine that can be used both in the surface and underwater position. In the above-water position, atmospheric air is used for movement. Under water, an oxidizing agent is supplied from a Dewar vessel, which contains liquid oxygen. The gas mixture emitted by the turbine is cleaned and frozen, without releasing anything outside. Thus, the underwater speed without using a battery (only from VNEU) exceeds 10 knots. Malachite is developing not only an engine, but also a submarine. The project has a code P-750B. The designed submarine has 1450 tons of surface displacement, a crew of 18-20 people, a depth of immersion of up to 300 m, and a maximum speed of 18 knots. The submarine may be armed with torpedoes, mines and even Caliber cruise missiles.

It remains to answer the question: why does the Russian Navy need submarines with VNEU? In essence, modern VNEU have a number of disadvantages: low power, which forces them to be used together with a traditional diesel-electric power plant, as a result - low underwater speed at VNEU (not applicable to diesel-electric submarines with lithium-ion batteries), high cost, necessity facilities on the Navy special infrastructure.

Yet the merits outweigh the demerits. The main one is the high secrecy and difficulty of detecting such submarines by anti-submarine aviation. This is very important for us, because, for example, Japan has about a hundred modern anti-submarine aircraft. Another advantage is the very low noise level, often less than the background noise of the sea. And finally, no matter how expensive a submarine with VNEU is, it is still cheaper than a nuclear one. In addition, submarines with VNEU are actively used in fleets our potential adversaries: Germany, Turkey, Japan. In the event of a conflict, our submariners will have to confront more advanced submarines. And if you do not develop modern engines with VNEU, then the technological gap that is taking place now will eventually become an insurmountable abyss.

Ctrl Enter
Noticed a mistake Highlight text and press. Ctrl + Enter
We are
What you didn't want to know about EnglandSediment from "Varshavyanka"
153 comments
Information
Dear reader, to leave comments on the publication, you must to register.