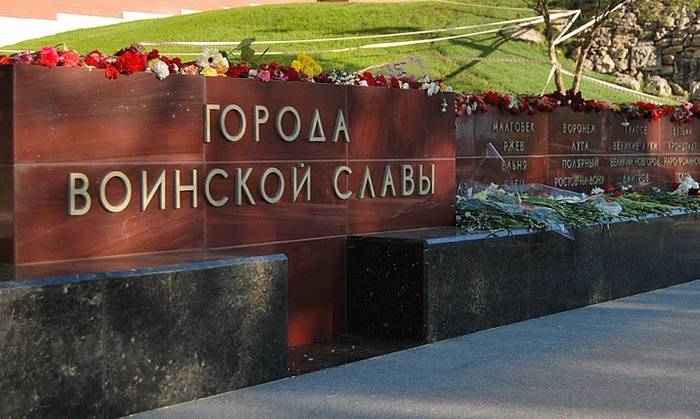 Since 2006, in addition to the hero cities known to everyone since the Soviet era, settlements appeared in our country that received the honorary status of “City of Military Glory”. By what criteria is such a high rank assigned, how does it differ from the “heroic” one, and why did the choice fall on particular settlements? Let us try to briefly give answers to these questions.


Recall that this decision was approved by the corresponding decree of the President of Russia of December 2006 No. 1340. The first cities that were awarded high honor in 2007 were Kursk, Orel and Belgorod. Then in the same year: Rzhev, Yelnya, Yelets, Malgobek and Vladikavkaz. In 2008, Voronezh, Luga, Polyarny, Rostov-on-Don, Tuapse, Velikiye Luki, Veliky Novgorod, Dmitrov became cities of military glory. In 2009, the list was replenished with Vyazma, Kronshtadt, Naro-Fominsk, Pskov, Kozelsky and Arkhangelsk. The next year it included Volokolamsk, Bryansk, Nalchik, Kalach-on-Don, Vyborg, Vladivostok, Tikhvin, Tver.

The year 2011 brought recognition of military merits to Anapa, Kolpin, Stary Oskol, Kovrov, Lomonosov, Taganrog, Petropavlovsk-Kamchatsky. A year later, Maloyaroslavets, Mozhaysk and Khabarovsk joined them. The last awarding of the title “City of Military Glory” was made in 2015 and was awarded with Old Rus, Grozny, Gatchina, Petrozavodsk and Feodosia. According to the relevant provision, the high status is awarded to the city for the heroism and resilience of its inhabitants in the struggle for freedom of the country. A special mark of distinction for such a settlement becomes a special commemorative column installed in it. Since 2010, a stele with the names of all cities of military glory of Russia has been included in the memorial complex "Tomb of the Unknown Soldier" in the Alexander Garden near the walls of the Moscow Kremlin.

What is the main difference between the hero city and the city of military glory of Russia? The first of the titles was awarded during the years of the Soviet Union and was primarily inextricably linked with the events of the Great Patriotic War, and only with them. Now that a number of these cities have appeared on the territory of other states more or less friendly with Russia, the restoration in full of our Russian memory of those countless wars in which entire generations of our ancestors have earned eternal glory has become especially urgent for our country. by labor, and often at the cost of our own lives, defended our future with you. That is why many of the cities of Russia's military glory, unlike hero cities, were not the arenas of the most large-scale and fateful battles of the Great Patriotic War. However, this does not at all make them less worthy of the status that they are assigned.

In the area of ​​Kozelsk in 1941, great battles did not take place. But he entered forever into history like an impregnable fortress, against the walls of which three hundred combatants and locals managed to keep the countless horde of Batu Khan in 1238, whose warriors captured for much 5-7 days much larger cities and strongholds. With contempt, they rejected the offer to surrender the townspeople in their own words about their readiness to "lay their heads for the Christian faith and die in order to leave good glory in the world", and really immortalized themselves. This was confirmed by the heroic defense of the city and the martyrdom of all who were in it: the invaders did not spare even the babies. Batu continued to forbid mentioning the name of Kozelsk, ordering him to be called "evil city" ...

But Maloyaroslavets and Vyazma are places of memorable events of both World War II of our people. Moreover, if in 1941 the Vyazemsky defensive operation ultimately resulted in what modern historians justifiably call nothing more than a “catastrophe” (the environment of our troops, in which hundreds of thousands of people were killed and captured, including number of militias from Moscow), then in 1812, under this city, Russian troops defeated the other invaders - the “Great Army” of Napoleon, putting the last point in the enemy invasion and turning the organized attack of the French and their allies into a panic and promiscuous flight.

However, to a large extent this victory was predetermined by the battle held 10 days earlier for Maloyaroslavets. In the course of the street battles that have reached an incredible bitterness, which, in a town of no more than 1500 people, clashed with two thousands of armies, it was destroyed and burned to the ground. According to the recollections of the participants, the streets could be distinguished only by the dead bodies that strewn them, and the houses turned into "smoking ruins, in which skeletons were visible." At the cost of considerable sacrifices and thanks to the unbending stamina of the Russian soldiers, the Napoleonic army was forced to turn to the Old Smolensk Road to retreat, where it was waiting for the Vyazma defeat and final death.

About each of the cities of military glory, you can write not even one book, but many. They have been written about many. Others are waiting for us to fully discover the exciting, tragic and heroic pages of their history, following the principle of "Nobody is forgotten and nothing is forgotten!"

We are in Yandex Zen
"Cauldrons" of 1941. What happened
Nikolay Lebedev. Thunderstorm Romanian 1st Panzer Division
31 comment
Information
Dear reader, to leave comments on the publication, you must to register.