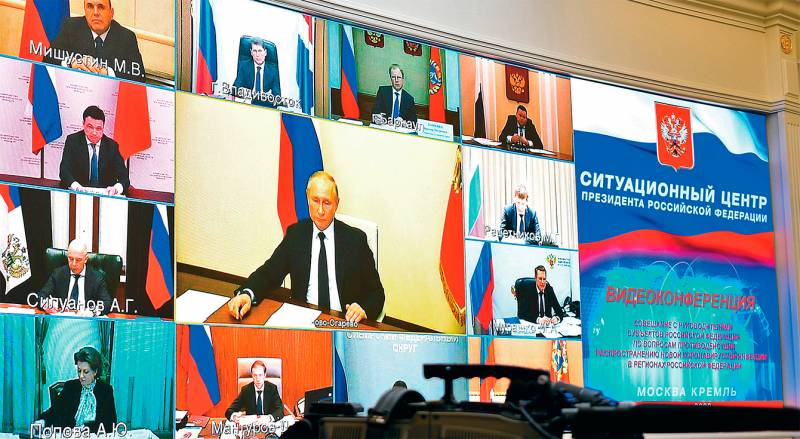 While citizens around the world are self-insulating, very important processes are taking place. “Reset matrix”: on the example of Russia, you can clearly see the destruction of the old world, the current socio-political and economic system.

The global global financial system is collapsing. Oil system. Countries that felt very good in this system, including the Russian Federation, are plunging into a tough crisis. Governments and elites are deliberately breaking the economic ties that have developed over decades. Production stops, unemployment, poverty and crime are growing rapidly. People thrown into conditions of self-isolation sharply reduce consumption. But their resources are limited, so in a month, two or three they will look for sources of subsistence, which will intensify the processes of turmoil. Either a huge social transformation will be carried out - people will be made dependent on external assistance, they will restrict their rights in return and introduce a social rating (in a word, “digital concentration camp”).

In particular, under the pretext of fighting the virus, Bill Gates has already proposed a global project to chip people through vaccination. True, while Trump is opposed to this idea and therefore refused to fund the World Health Organization. In Russia, the leaders are Moscow, where they are trying to break in the technology of new personality control systems.

Socio-political systems created in the XNUMXth century are actually self-destructing under the influence of many factors, the main of which is information (information panic, pandemic of fear). The central government was "self-isolated", powers were transferred to the regions. The leaders of the regions and mayors unexpectedly became unit princes and barons. National statehood and sovereignty are collapsing under the influence of global panic, escalated by the media and supranational organizations like the IMF and WHO. The collapse of the economy, including the oil collapse, regionalization, which may soon turn into separatism, and the growth of social tension break statehood.

Interestingly, almost the whole world capitulated to the "virus", leading to the complete destruction of the old world. Only civilization countries like China and Japan have their own characteristics. Trump resists, quite reasonably arguing that destroying the economy is much more dangerous for ordinary Americans than a strange virus. Resists Lukashenko. After all, it is obvious to any sane person that there is no epidemiological catastrophe! On April 16, 2020, 2 million patients in the world and over 138 thousand died. A pandemic is about 10% of those affected by the population, an epidemic is in the region of 1%. That is, in Russia for the epidemic there should be 1,4 million sick people, and pandemics - 14 million. Many ordinary diseases like pneumonia, cancer, cardiovascular diseases take much more people. Tens and hundreds of thousands of people mow down alcohol, tobacco, drugs, kill in wars or bandits, die of hunger, on the roads, etc. But why think about it? People should be in fear without a situation analysis.

Let the storm break out stronger?

Why are regional authorities fighting the virus? Where is the sanitary-epidemiological service, the Ministry of Emergencies, and if the business is very bad, the armed forces? Where is the central authority? Putin is "self-isolating." If it goes on like this, then he will repeat the fate of Gorbachev or Boris Godunov. Instead of the leader of the country - Sobyanin. The army was isolated, like other central organs. Current legislation is violated everywhere. Like the Constitution.

Thus, we see rather the development of not an epidemic, but mass psychosis. The Kremlin made a strategic mistake when it followed the Europeans in developing this epidemic of psychosis and fear. Although the example of sanity at hand is Belarus, the “father” of Lukashenko. While the head of White Russia holds an information blow, but one in the field is not a warrior. Europe, Ukraine and Russia - in common.

It is already obvious that in the spring and summer of 2020 the situation will not magically reverse. A new Great Depression has come. It must be remembered that in the first Great Depression, when the capitalist world writhed in agony, the USSR-Russia prospered, we had an economic miracle. Thousands of new industrial and agricultural enterprises, health centers, schools, institutes, houses of creativity and culture, theaters were built. Large-scale infrastructure projects were implemented. Life has become better, life has become happier. The people enthusiastically built a beautiful new world, the civilization of the future. Then we were a self-sufficient system, and it was “violet” to us that the West was feeling bad.

Now the opposite is true. The Russian Federation is the periphery of the capitalist world. Energy Power Station. With the top, which is used to living within the framework of the oil-dollar system and otherwise does not know how and does not want. If Europe and the United States will be hurt during the crisis, then peripherals like the Middle East and the Russian Federation will die. In the scenario of the fight against the virus that we see now in Russia, the current society and economy simply will not survive. All available reserves will be quickly exhausted. The destruction of a single economy will be followed by the state apparatus and power structures. At the same time, in Moscow, the population is clearly preparing for a powerful protest, after which many regions can explode. Further, the pro-Western liberals of the 90s may come to power, the interim government of the Kudrins, Chubais, Sobyanins, Kiriyenko. The scenario of the collapse of the Russian Empire and the USSR.

We are in Yandex Zen
The world we leave, the world we enter, and the world between them
What you didn't want to know about England
447 comments
Information
Dear reader, to leave comments on the publication, you must to register.