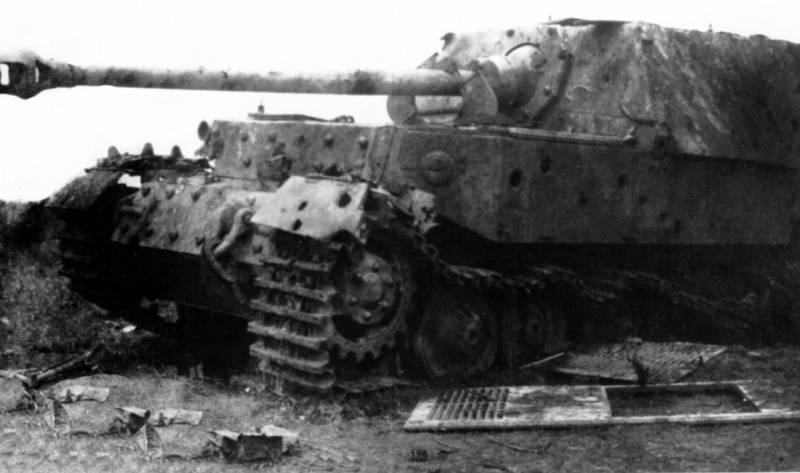 “If now the former superiority of the enemy in quantity tanks", airplanes, mortars, machine guns were eliminated, if our army does not currently experience a serious shortage of weapons, ammunition, equipment, then this must first of all be seen as the merit of our working class."
I. Stalin. From a report at a solemn meeting of the Moscow Council of Deputies with party and public organizations in Moscow on November 6, 1943

The words that accurately characterize the situation at the turning point of 1943-1944 were chosen as an epigraph to this material: in particular, the domestic tank industry was able to provide the front with the necessary amount of armored vehicles. At the same time, the Nazi tank industry was, of course, the main driver for the development of Soviet tanks. The most valuable material for domestic engineers were the trophies of the spring-summer of 1943. The result of a six-month study was numerous publications in the Bulletin of the Tank Industry in 1944. This period is of particular interest because of the special situation of the Soviet Union: victory in the war was already obvious, only a matter of time remained. Strange as it may seem, the authors of a specialized technical publication (and also a secret one) did not deny themselves an emotional assessment of the situation. So, engineer-lieutenant colonel Alexander Maksimovich Sych in the material “German heavy tanks” (No. 1, 1944) directly writes:

“The masterpieces of German tank building, the“ most powerful tank in the world ”, as they (the Nazis) called their armored Tiger, as well as the Panther and Ferdinand, turned out to be vulnerable machines and broken by Soviet military equipment, heroism and the training of the Red Army, the art of its military leaders. ”
According to the author, by the way, he is the deputy head of the Kubinka test site for research and development, the new German heavy equipment had a large number of serious defects, weaknesses, vulnerabilities and even frank design flaws. At the same time, notes A. M. Sych, the Hitlerite “menagerie” is a serious and powerful adversary. 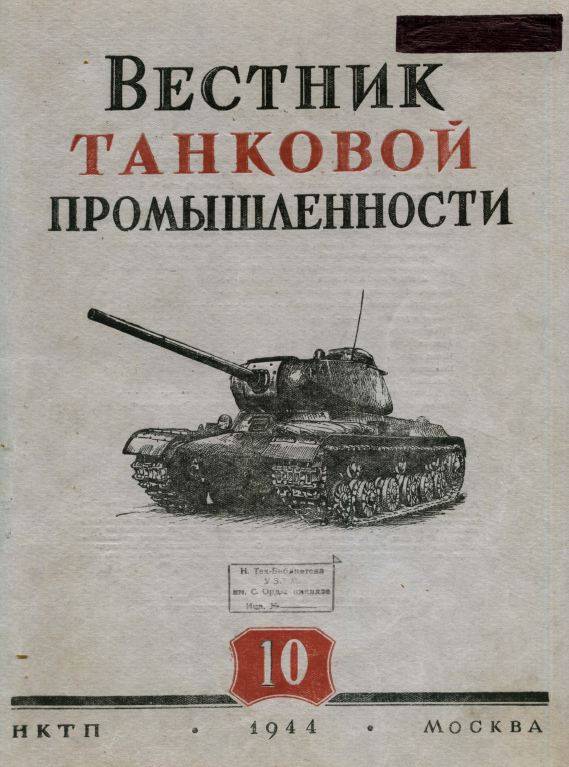 Source: Bulletin of the tank industry
Among the general conclusions regarding the assessment of the heavy tanks of the Third Reich, engineers at the Kubinka Test Site highlight the ever-increasing armor protection. So, from 1941 to 1943 the frontal armor became 2 times thicker, and when compared with the pre-war years, 3-6 times. The main problem, according to military engineers, was the insufficient specific power of the tanks, which was steadily decreasing from the T-II model and reached a minimum for the Ferdinand self-propelled gun - only about 9,5 hp / t. The article suggests that in the future the Germans will continue to force tank engines, although many power plants have already exhausted this potential. In addition, the Germans, according to the author, tanks from TI to T-IV in a hurry will be converted into self-propelled gun mounts, withdrawing them from the first lines due to poor booking and armament. Despite the fact that German designers are trying to maintain the generic features of Hitler’s tanks (the location of the transmission, in particular), they do not shy from borrowing ideas from their opponents. Moreover, all in a row, according to A. M. Sych and his colleagues. So, the shape of the hull and turret of the Panther is copied from the Soviet T-34 and T-70; the control system of the Tigers and Panther was taken from the French Somois; viewing prisms borrowed from American cars; near the KV tank, the Germans (more precisely, F. Porsche) peeped at the internal depreciation of the road wheels of the self-propelled guns Ferdinand, and the Germans stole the Panthers two-torsion suspension from the Swedish Landsverka. 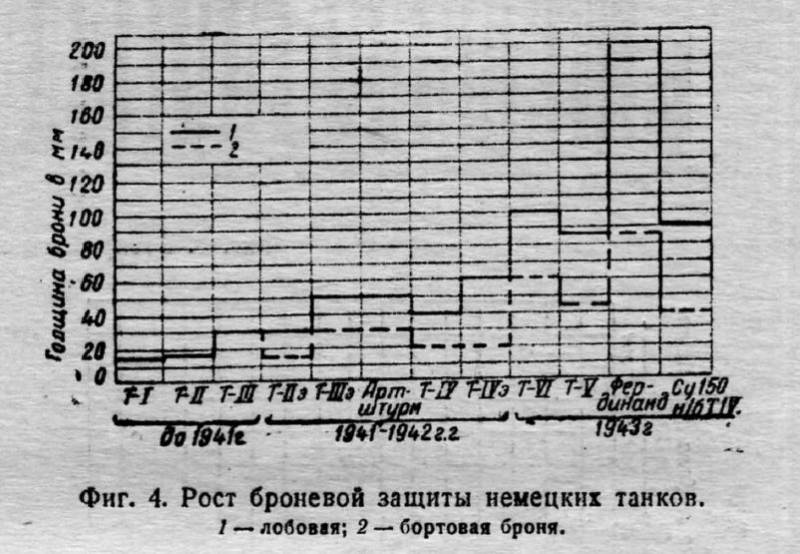 Source: Bulletin of the tank industry
These are the hodgepodge did in Germany during the Second World War. Analyzing the tactical and strategic situation at the fronts, engineers from Kubinka predict the appearance of new, even more thick-armored tanks, or a significant modernization of existing ones. As shown история, wait a few months.

Among all the machines that went through the hands of domestic engineers, the greatest impression was made by Hitler's Panther. Describing the positive aspects of this tank, the engineers mention the reduction of machine gun weapons, which makes a conclusion about the predominantly anti-tank use of this machine. Unitary cannon cartridges, electric trigger and the best in the world, according to the author of the material, binocular breaking telescopic sight also earned praise. Regarding the frontal part of the tank, A. M. Sych does not get tired of reminding that rational tilt angles have been decommissioned from the T-34, and gives the results of a test bombardment. The 75-mm gun does not penetrate the Panther’s inclined upper frontal part at any distance, but the vertical standing 200-mm armor plate of the SAU Ferdinand pierces from 200 meters.

Now to the cons of this tank. An unbalanced tower seriously complicates the turn - obviously, this was the result of moving the gun forward in a mask with a reserve for the installation of a more powerful gun in the future. Due to the imbalance of the tower, it was necessary to build a bulky hydromechanical turning system. Also among the minuses, engineers distinguish weak armor of the sides and stern, which is inappropriate for the type of tank. Here, by the way, the author’s error regarding the Panther classification is visible - in the Soviet Union he was considered a heavy tank, and in Germany it was just an average. As a result, after a careful study of the Panther, engineers from Kubinka recommend taking this enemy seriously and carefully preparing the opposition. But the “Tiger" A. M. Sych considers in all senses weaker than his younger brother.

The enemy also had his opinion on Soviet tank construction. It seems to be interesting to meet him. So, the speech of Colonel Esser on December 3, 1942 at a meeting of the military-technical section of the Union of German Engineers, published in the MTZ specialized journal almost a year later.

The material deals not only with Soviet tanks, but also with French, American and English - Germany had enough opponents. We are interested in evaluating exclusively domestic tanks. Among the light tanks, the author especially stands out the T-70 and its 45-mm gun, but the Germans did not see anything else outstanding in this category. But on medium and heavy tanks more information. The T-34 is praised for serious weapons (in the German manner, the caliber of the guns is written 7,62 cm) and even cite our designers in this regard as an example to the British and French. The division of labor of the crew in the T-34 was not brought to the level of armored vehicles from the UK, and the fighting compartment in the Soviet tank seemed very close to the Germans. Esser could not resist the humiliation of the T-34. The colonel claims that the T-34 takes its roots from the BT, which, in turn, was copied by the Russians from the American tank Christie. But he immediately notes a high power output of 18 hp / t, which allows the car to develop a record speed of 54 km / h, while consuming relatively little fuel. Regarding the KV-1, the Germans are restrained - they only note good mobility for the class of the car, but the KV-2 with a 15-cm howitzer is described in more detail. Firstly, according to the Germans, this is not a tank, but a self-propelled artillery mount. Secondly, it is obvious that 40-kg separate-loading shells seriously reduce the rate of fire of the gun. Thirdly, the tank compares favorably with its English and French counterparts in high specific power - about 10 liters. s / t

The Germans paid special attention to Soviet tank engines. Let's start with the diesel B-2. The use of one engine for medium and light tanks seemed to the Germans an absolute plus. Esser thought that the Russians in the development of engines prefer weight loss, but the French and the British think more about the resource. On the old tanks that fell into the hands of the Germans, were aviation petrol M-17, which were copies of the aircraft BMW-IV. About B-2, the name of which they did not know at that time, Esser writes:

“This diesel engine is a development of the Russian design, using various types abroad. This motor represents, in terms of design and processing quality for Russian conditions, an undoubtedly high level of development. The fuel consumption is very small and provides the machine with a large radius of action. "
The Germans experimentally calculated the oil consumption of the Soviet tank diesel and were horrified - 15 kg per 100 km of track! Most likely, an error crept into the colonel’s calculations, or a defective diesel got to the Germans for testing.

With the gearboxes of the Russian tanks, according to the Germans, everything is bad. The reasons are the primitiveness of the system of movable gears, in which the gears mesh with each other, as well as in the aft arrangement of the gearbox. Such an arrangement forces the installation of long levers with a large backlash and the presence of intermediate links. In general, Esser considers the gearbox and the mechanism of its shifting the most important minus of the T-34 and KV - almost all the trophies that fell into his hands were with a collapsed clutch. 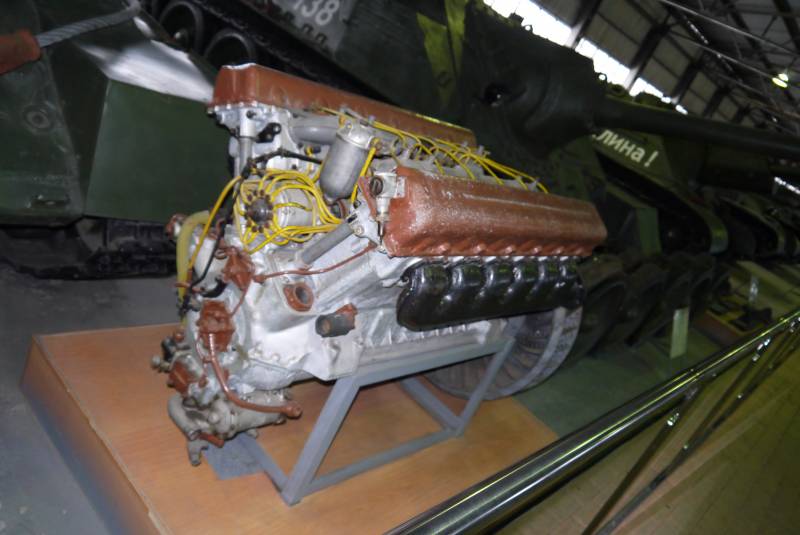 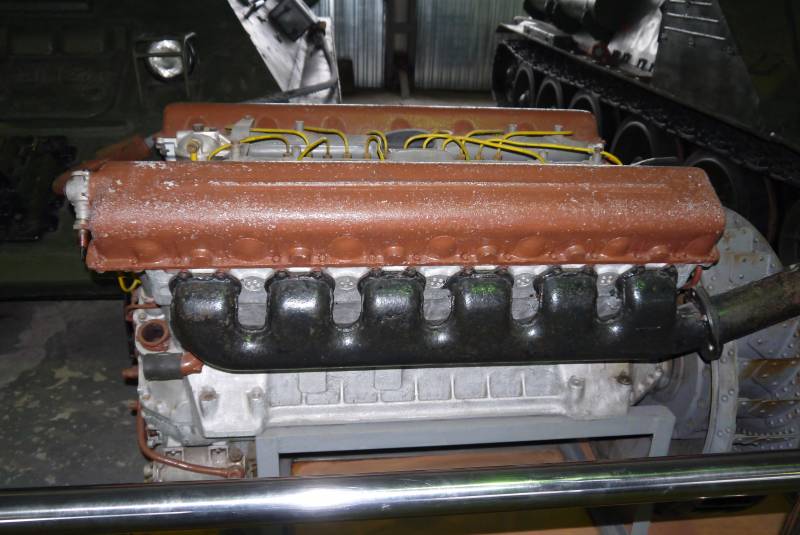 The legendary B-2, so surprised the Germans. Cuban. Author photo
In conclusion - the conclusions regarding Soviet tanks, which Esser voiced at the end of his material:

“The USSR began the construction of tanks more than 10 years ago, copying in large quantities foreign cars, namely the American tank Christie and the English tank Vickers-Armstrong. In large maneuvers, these machines were tried on a large scale and lessons were learned from this experience. In further consistent development, in some cases slavishly adopting individual parts and assemblies of foreign-made tanks, the Russians created tanks that, in the constructive and production sense, taking into account the Soviet conditions, certainly deserve attention and in some respects surpass the fighting vehicles of our other opponents. ”

Based on materials from the Bulletin of the Tank Industry.

We are in Yandex Zen
Russian fleet in the First World War and its combat effectiveness. Part of 5
Go to the battle self-propelled - "Hypericus" against "Ferdinand"
158 comments
Information
Dear reader, to leave comments on the publication, you must to register.