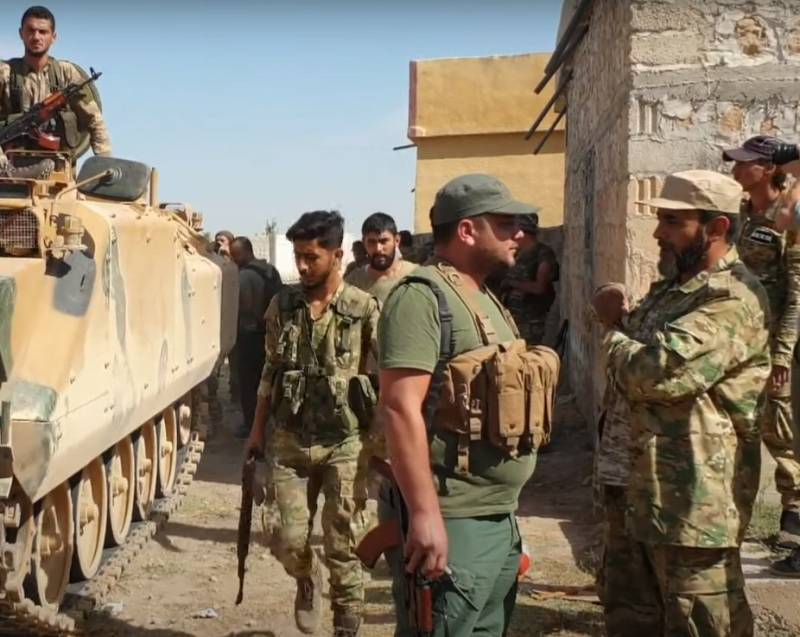 The situation in Idlib remains tense. Up to 5 thousand militants are expected to be transferred to the Syrian province, but it is possible that they will have to fight not only with government forces.


Clashes between government forces and militants of the Khayyat Tahrir al-Sham group banned in Russia are currently ongoing in Idlib. Firing by fighters of positions of the government troops of Syria was observed in the vicinity of the village of Al-Bara, as well as at the heights of Jebel al-Zawiya. At first, the militants fired at Syrian positions, after which the artillery of the Syrian Arab army covered their positions with the fire of their guns.

Interestingly, the HTS found itself a new enemy besides the Syrian Arab army, the Russian military contingent and Shiite militias. And this enemy is quite dangerous for the group, especially since it has solid support.

Numerous reinforcements are being sent to Idlib by the Syrian National Army (SNA), one of the opposition’s armed groups oriented towards Turkey and supported by the Turkish armed forces. Presumably, the SNA will transfer 5 militants to Idlib, who will have to ensure the rule of law in the provinces and protect prosecutors and Sharia courts. An agreement to perform these functions has recently been concluded between the leadership of the SNA and the Turkish military command.

There is no doubt that the main purpose of the transfer of SNA units to Idlib is to provide a counterweight to Khayyat Tahrir al-Sham. The fact is that recently this radical group has been demonstrating unwillingness to obey the requirements of the Turkish side. Following the clashes in the KHTS protest camp, clashes between the KHTS and SNA fighters took place near the M4 highway. Information has appeared on the network about the threats of the KhTSH militants against the Turkish military. The radicals promise to chop off the head of every Turkish soldier who will be caught while patrolling the M4 motorway.

Obviously, the transfer of SNA units to Idlib was sanctioned by the Turkish command, including for this reason: Ankara is going to use controlled groups in order to "put in place" the presumptuous HTS militants. But it is possible that militants of pro-Turkish formations will act against government forces.

In particular, over the past day there were clashes between units of the Syrian Arab army and a detachment of the pro-Turkish group Jebhat al-Wataniya lil-Tahrir. The collision killed one of the field commanders of the group. In the city of Gerablus, in the province of Aleppo, SNA militants clashed with militiamen previously of the al-Jasat tribe.

Also, according to local sources, a convoy with killed and wounded militants of the Syrian National Army arrived in the regions of Aleppo controlled by Turkey and its allied forces. In total, 126 people entered Syria, who participated in the hostilities in Libya on the side of the "government of national accord."

As you know, Turkey periodically recruits and sends to Libya to protect its interests the militants of controlled groups operating in Syria. There are many who wish, since the Turks promise to pay 2,5 thousand dollars to each militant. Only, as we see, far from all come back alive and unharmed from an African country.

Another interesting event occurred in the area of ​​the village of Jadet-Yabus in the west of Damascus. Here, an unknown unmanned aerial vehicle struck a car. It soon became clear that the car bombed by the drone had Lebanese numbers, it belonged to the Lebanese Shiite Hezbollah group.

The Israeli Air Force inflicted a blow, which during the war in Syria bombed hundreds of times the objects of both Iranian Shiite groups and Hezbollah, and the Syrian government forces.

This time, apparently, the Israeli military hoped to eliminate Mustafa Mugnia, the youngest son of the late Imad Mugnia, who led the intelligence of the Shiite group. In addition to Mustafa Mugniya, the officer of the Iranian special forces, which is part of the Islamic Revolutionary Guards Corps, was also in the car. Interestingly, both Mugniya and the Iranian survived as a result of the Israeli strike.

For attacks on Syrian territory, Israel uses both aircraft flying from Lebanon and unmanned aerial vehicles. The Lebanese leadership has already expressed its indignation that Israel is using the country's territory to strike at a third state.

We are in Yandex Zen
Group "Hayat Tahrir al-Sham" captured the Syrian Idlib
Reports from the militia of New Russia for 27-28 September 2014 of the year
36 comments
Information
Dear reader, to leave comments on the publication, you must to register.