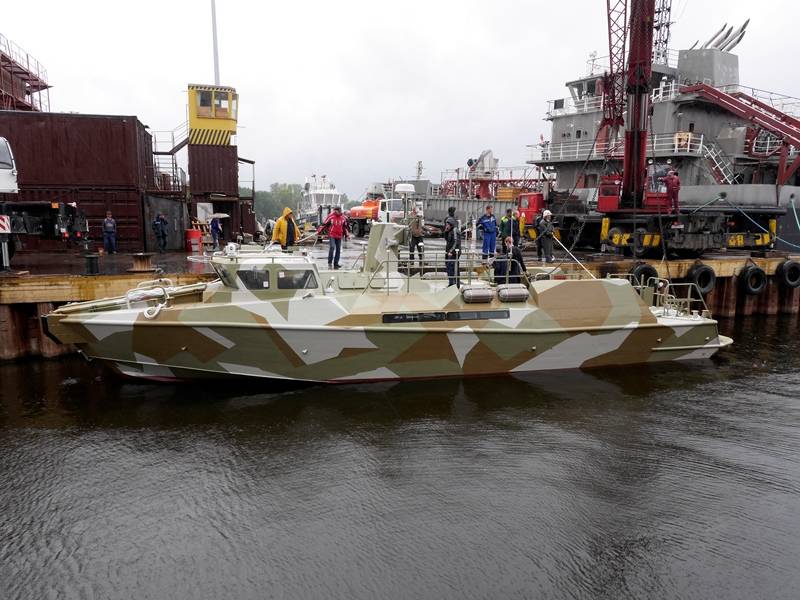 One of the most interesting shipbuilding programs of recent years is the production of high-speed patrol boats, pr. 03160 Raptor. A new project appeared at the beginning of the last decade and soon reached the series. Two contracts for the supply of boats have already been completed and work is underway on the third. To date, the navy has managed to get 14 serial boats, two more will enter service soon.

Project 03160 "Raptor" was developed by the Leningrad Shipyard "Pella" in the early tenths. When it was created, foreign and domestic experience in the field of speed boats was taken into account, which led to the desired results. In 2012-13. on the "Pella" was built the lead boat of the project P-274 (serial number 701). In August 2013, he passed the necessary tests.

At the end of June 2014, the Ministry of Defense announced the conclusion of an agreement for the supply of new boats, project 03160. It provided for the construction of eight units of equipment with delivery in 2014 and 2015. - 4 boats per year. By this time, the boat with the serial number "702" was already launched and was preparing for testing. Soon the construction of several more units was completed.

According to press reports, by the end of 2014, the first four boats were launched and were preparing for testing. The necessary activities continued until March 2015. First, they signed an acceptance certificate for three boats, and a few weeks later the customer accepted the fourth. 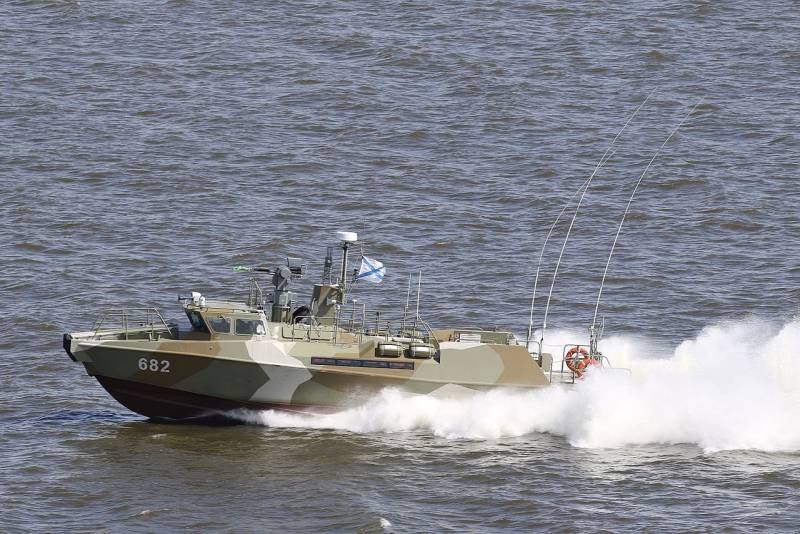 One of the Baltic boats fleet. Wikimedia Commons Photos
In 2015, construction continued. In the fall, four new boats were launched and put to the test. Two "Raptor" completed the tests and were transferred to the customer at the end of November. Two more passed in a month - "under the Christmas tree." This completed the first order.

In May 2016, a new order appeared. This time, the Ministry of Defense wanted to get six Raptor boats by the end of 2018. The Pella plant again successfully completed the task, and the Navy received the required equipment in a timely manner. 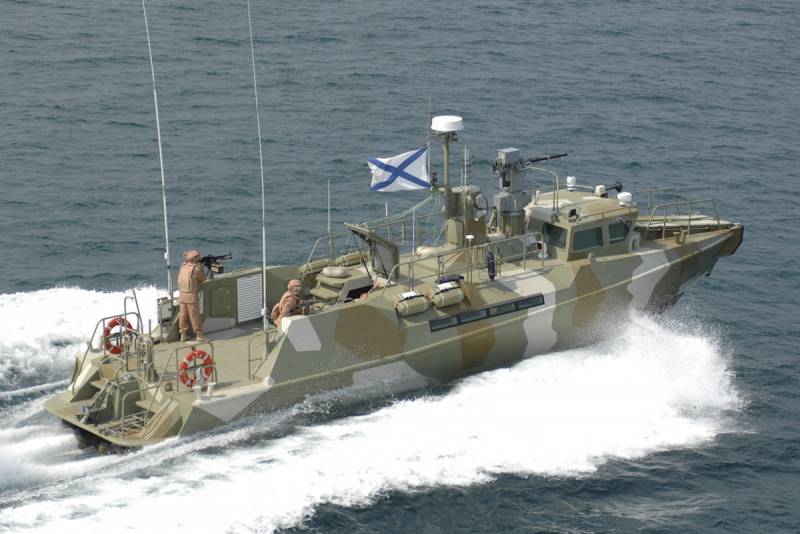 Photo by the Ministry of Defense of the Russian Federation / mil.ru
Boats pr. 03160 of the second contract were distributed between three operational strategic associations. P-413, P-345 and P-434 were handed over to the Baltic sailors. P-415 and P-425 included in the Black Sea Fleet. The P-437 boat became the first combat unit of its type in the Caspian flotilla.

Currently, Pella is already fulfilling its third order for the construction of the Raptors for the Navy. It is the largest at the moment and provides for the supply of ten boats in a few years. The first boats of the new series have already been built and are preparing for testing. The completion of assembly of the following is expected.

According to the press service of the Ministry of Defense, on April 15, a ceremony was launched at the Pella plant to launch two boats with serial numbers 715 and 716, the first in a new series. Now they will be taken out for testing, according to the results of which an acceptance certificate will be signed. During the ceremony, the representative of the Navy command said that the delivery of two boats is scheduled for June, they will serve in the Baltic Fleet. Crew training has already begun.

As follows from the available data, at present several more boats of Project 03160 should be at different stages of construction. Over the next few months they will be launched, after which they will pass tests and transfer to the customer. 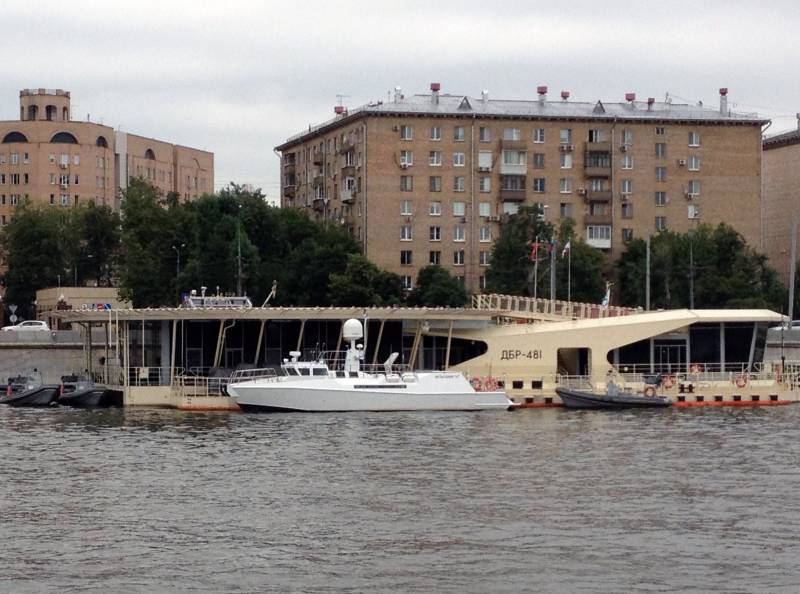 Communication boat P-344 at the National Center for Defense Management. Wikimedia Commons Photos
The exact completion dates for a series of 10 boats have not yet been announced. Given the experience of shipbuilders and the volume of the order, it can be assumed that the last “Raptors” of the third contract will enter service no later than 2022. According to the results of this construction, the total number of such boats in the Navy will reach 24 units.

The construction of all planned and contracted patrol boats of Project 03160 Raptor has not yet been completed, but the Navy has already received a sufficient amount of such equipment. With its help, several fleets solve problems of various kinds, including special.

At present, 14 boats have been commissioned and commissioned. In just a couple of months, their number will increase to 16. Almost all of the delivered boats, 12 out of 14, perform anti-sabotage functions and are used by the relevant fleet units. Two more are built as communication boats and are intended for use by the fleet command or the armed forces.

The largest group of "Raptor" at the moment is formed as part of the Baltic Fleet. He has seven units of similar equipment in two versions. Five patrol boats and one P-413 communications boat are based in Kronstadt. Another communications boat, the P-344, is included in the Baltic Fleet, but is serving away from its bases, on the Moscow River. In the near future, the number of boats of project 03160 in Kronstadt will again increase. 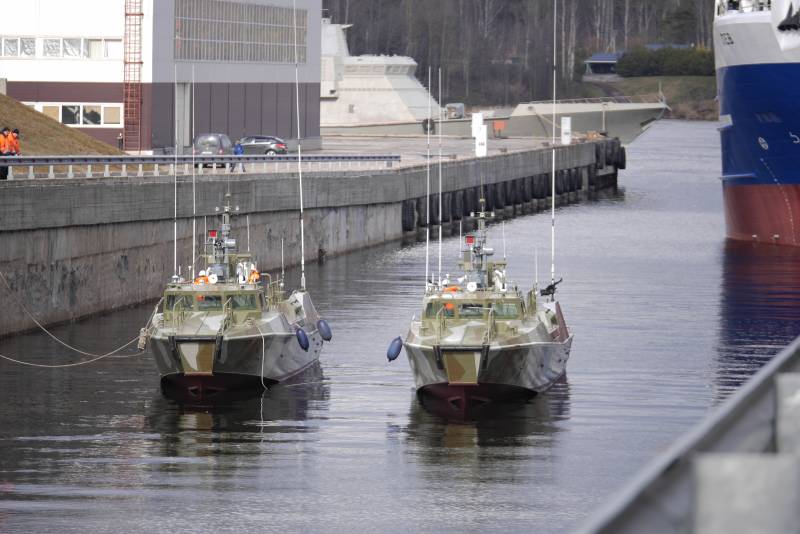 New boats "715" and "716" launched on April 15. Photo of the Pella plant / pellaship.ru
The Black Sea Fleet is slightly behind. From 2014 to 2018, he received six boats in the original patrol configuration. Probably, the delivery of new boats from the third series is planned. The Caspian flotilla still has only one Raptor, but new deliveries are not excluded.

Since June this year, the delivery of a new batch of 10 boats will begin. How exactly they will be distributed among the fleets is unknown. Perhaps with their help they will strengthen the Caspian flotilla. It is also possible to transfer boats to the Northern and Pacific Fleets, in which the Raptors are not yet available - but there are anti-sabotage units interested in obtaining such equipment.

Security and other tasks

During the recent launching ceremony of two boats, the words of the Navy commander in chief were heard. Admiral Nikolai Evmenov in his congratulatory address read at the event noted that the Navy command pays attention not only to the construction of ships of the sea and ocean zones, but also to the development of the base infrastructure. The latter needs protection, and in this context, boats of Project 03160 Raptor are of great importance.

To date, the Raptors have come at the disposal of two fleets and a single fleet, which has increased the potential of anti-sabotage forces. In the future, a new reinforcement of such units is expected due to 10 new boats - or more if new orders appear. In addition, one should not forget about the boats in a special coherent design.

In all cases, the modern boat pr. 03160 shows itself from the best side. The construction of such equipment continues, and due to this, the fleet receives a convenient multi-purpose tool, moreover, on time and in the required quantity.

We are in Yandex Zen
Rapid patrol boat project 03160 "Raptor"
CombatBoat 90 in Russian. Patrol boat "Raptor"
33 comments
Information
Dear reader, to leave comments on the publication, you must to register.