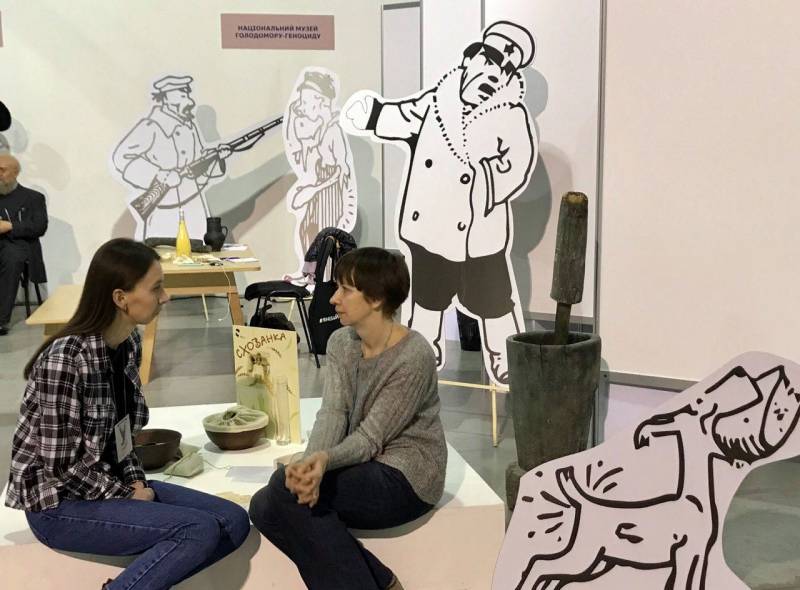 Among the various striking manifestations of anti-Sovietism and Russophobia, elevated to the rank of state policy, a special place is occupied by various museums dedicated to the "Soviet occupation" and in some cases its particularly "terrifying" manifestations, which are available in a number of former republics of the Soviet Union. It is sad to say, but the number of such “cultural institutions” is steadily growing over time. True, the quality remains at the same level ...


Expositions devoted to the years of “living under the yoke of totalitarianism” are available in Georgia, Ukraine, the Baltic countries, and Uzbekistan. The greatest zeal in “exposing the crimes of the oppressors” was shown in the “unfettered” one, having also set up a separate “Holodomor Museum” in Kiev, which, as you know, was rampant exclusively in Ukraine and was planned by someone you knew.

You can talk about these institutions almost ad infinitum, marveling at how bizarrely they manage to interweave unconsciousness, ingratitude and the ability to please the most base manifestation of the political situation. But all of them, by and large, are exactly the same. Although the museums of the Soviet occupation in Riga, Tallinn, Tbilisi and Kiev, at least the Museum of Genocide Victims in Vilnius or the Museum of Remembrance for Victims of Repression in Tashkent. The main feature that unites them is forced lies, without which their very existence loses all meaning.

In the museums of the Baltic states, however, there is one specific feature. Their organizers made every effort to put a sign of absolute equality between the periods when these republics were part of the USSR and the time when they were under the heel of the Nazi invaders. The simplest example is that in Tallinn, visitors at the entrance are greeted by two impressive metal structures that represent “steam locomotives”. On one is a swastika, on the second is a red star. In the womb of one lies the bust of Lenin, in the second - of Hitler. Such artistic techniques are designed to hammer into the head not particularly burdened with intelligence and knowledge in stories visitors a simple idea about the identity of two totalitarian regimes.

Moreover, the emphasis is often placed on the fact that the "Soviet occupation" lasted longer than the German one, and, therefore, "did more harm." The entire large-scale Museum of Genocide Victims in Lithuania, located in the building of the former NKVD-MGB-KGB of the republic, is 99% devoted to the "horrors of the bloody Gulag", right down to the recreated with special relish and scope in the basement of the "real Soviet prison". Holocaust victims, Jews tortured and killed during the years of Nazi occupation, received minimal attention. And about the role in the extermination of Jews (and not only them, but also people of other nationalities, including Russians) in those terrible years, voluntary accomplices of the Nazis from the "indigenous population" played - not a word.

In general, the unscrupulous exploitation of prison-camp subjects in all without exception “museums of occupation” suggests the idea of ​​directly unhealthy addictions on the verge of mental disorder. In almost every museum you will find carefully, even I would say, lovingly selected collections of various "executioner" tools and fixtures, most of which most likely have nothing to do with the NKVD and the KGB. But how it looks! The cell doors arranged in a row in Tallinn are exactly the same doors, which lead dreary horror to visitors in Tbilisi ... Patterned work aimed at having those who had the misfortune to cross the threshold of such establishments firmly believed: in the Soviet Union there was nothing but penal servants, convicts, escorts, lattices and "thorns", and did not exist at all.

Another common feature is the “objects of Soviet life”, which are present there a little less than the “genuine personal belongings of victims of repression”. They are selected in such a way as to cause a maximum of disgust by the era of the USSR. If a telephone box, then with broken glass and a folding device. If the machine is selling soda, then it is also all rumpled and pepper-scratched. About monstrous rusty irons, disgusting furniture, except perhaps as a props for horror films, no less disgusting kind of clothes and utensils and say nothing. In the same Tallinn, the theme of the “Soviet automobile industry” is represented by a scattered “invalid” and, we must pay tribute, “Lada”. Also, however, having not the best view.

Common features that unite all these expositions: extreme tendentiousness, an attempt to imagine the time spent in the family of Soviet peoples as a period of endless “repression”, “dispossession”, beggarly life and hard labor. Moreover, the vast majority of them do not make much difference for an earlier time, that is, the pre-Soviet period. In the same Georgian and Uzbek museums with great pathos, they talk about "oppression" and "oppression" during the time of the Russian Empire. That is, there is a cultivation of Russophobia in its purest form.

According to the reviews of the vast majority of professional historians, the cognitive value of such museums is negligible, if not negative at all. But the ideological component, aimed at fooling and nurturing hatred, as practice shows, alas, is quite effective.

They, of course, will not tell about the growth of the economy and the population of the "occupied" republics, they will not show the evidence of those who, being the representative of the most ordinary Soviet family, received excellent education and went up the career ladder from the workshop to the head of the whole industry, it will not say a word about how industry, culture, and medicine were raised in the republics during the Soviet period. Just because it does not fit into that order and those goals and objectives that were originally set for such, so to speak, institutions.

Ctrl Enter
Noticed a mistake Highlight text and press. Ctrl + Enter
We are
The tragedy of the American army ("The Atlantic", USA)Results of the week. “In our cooperative, the board is always agreed”
98 comments
Ad