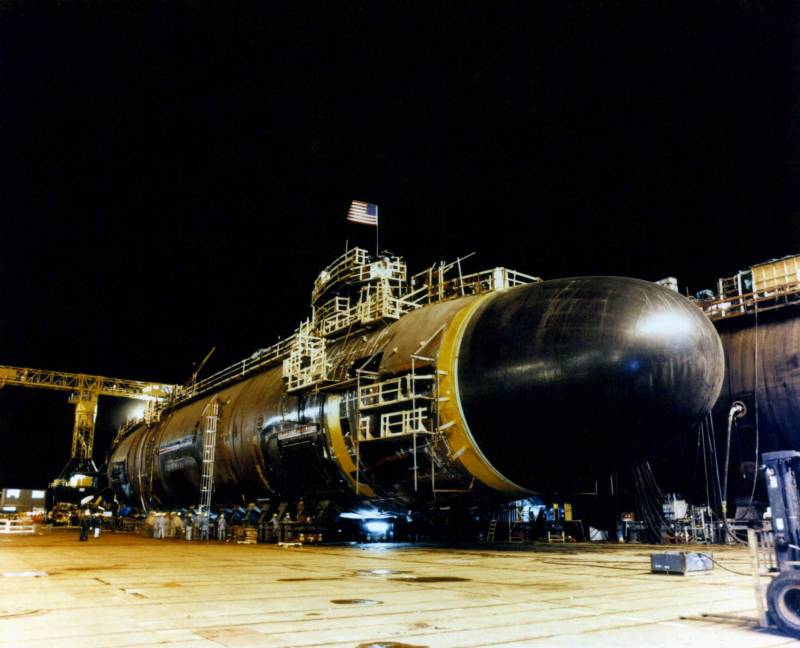 The creation of a new model of equipment with enhanced performance, superior to its predecessors, is always associated with the use of new technologies, as well as with increased costs. An excellent example of this can be considered the American program for the construction of multipurpose nuclear submarines such as Seawolf. With all its advantages, they turned out to be too expensive - and the series plans were reduced tenfold.

The appearance of the Seawolf project was preceded by scientific work to analyze the current situation and the development prospects of the main fleets of the world. Analysts at the United States Navy noted that a potential adversary in the person of the USSR Navy is constantly building up its potential, and its submarine forces have come close to the US in quantitative and qualitative indicators. Accordingly, to achieve the desired balance of power to the American the fleet It was necessary to create new strategies and models of technology.

In the early eighties, the command of the Navy developed a new strategy for the development and use of the fleet, affecting including submarine forces. It envisaged maintaining the duty of the existing multi-purpose nuclear submarines at the borders of anti-submarine defense in the ocean. In addition, it was proposed to create a new submarine for active operations in areas completely controlled by the likely enemy fleet.

The need to work dangerously close to enemy ships and submarines led to the emergence of new stringent requirements. The promising nuclear submarines should have been distinguished by reduced visibility, but at the same time carry improved detection tools, as well as modern anti-ship and anti-submarine weapon. 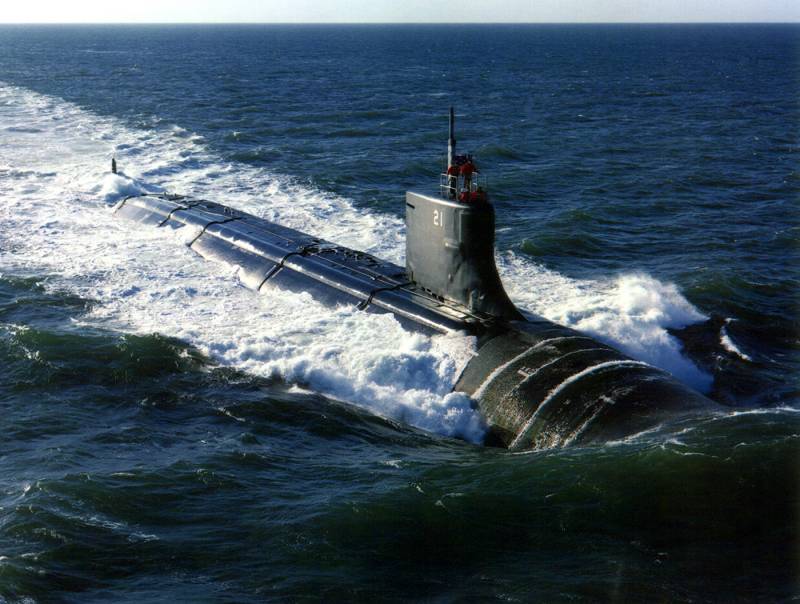 The same submarine at sea trials, July 3, 1996
The development of the new boat started in 1983 and was conducted by General Dynamics Electric Boat. She had to master the construction of ships. The lead submarine of the new project, as well as the entire series, received the name Seawolf - in honor of one of the first nuclear submarines of the US Navy. The project was assigned to the new 4th generation nuclear submarine.

At the request of the customer, the new Seawolf boats were to have several advantages over existing Los Angeles. To do this, the project had to provide for a lot of innovations of various kinds. New construction materials, advanced instruments, etc. were proposed.

The Seawolf project provided for an increase in size compared to the previous Los Angeles. The length remained at the level of 108 m, but the width increased to 12 m. The displacement of the new boat according to the initial design is more than 9,1 thousand tons. The new robust housing made of steel grade HY-100 allowed to increase the permissible immersion depth, and also had large internal volumes to accommodate the necessary tools and systems.

The power plant was based on a 6 MW S34W water-water reactor connected to two steam plants and two turbo-gear units. The main motor connected to the water-jet propulsion is responsible for the movement. When developing the latter, American engineers took advantage of the experience of British colleagues who had previously created the Trafalgar submarine project.

Using these systems, the Seawolf submarines were able to reach a top speed of 35 knots. Low noise underwater speed - at least 10 knots; at 20-25 nodes, the possibility of the full use of sonar systems remains. The range is almost unlimited. 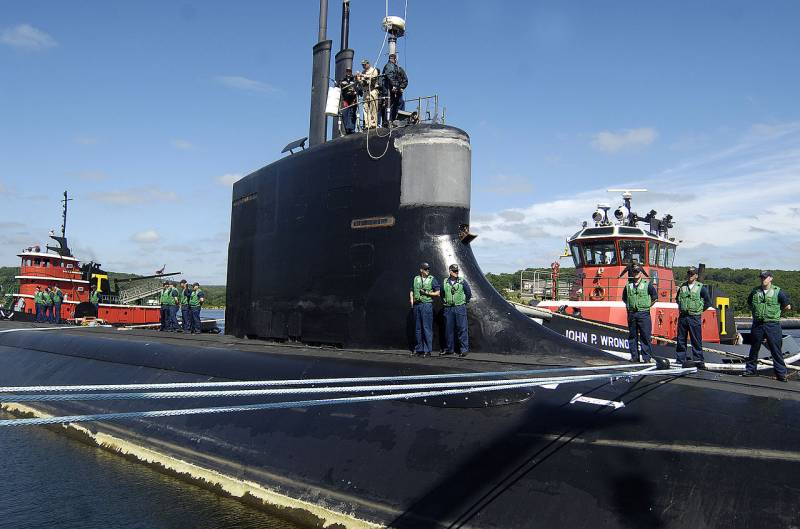 Submarine carries a developed set of sonar products. Under the nose fairing is a spherical antenna HAC AN / BQQ-10. On the sides, three wide-aperture GAS AN / BQG-5D are provided. Due to this, the submarine is able to monitor the situation in both the front and side hemispheres. The layout and characteristics of the SAC increase possible situational awareness, leaving minimal dead zones.

The Seawolf project provided for the use of the General Electric AN / BSY-2 combat information and control system, combining all surveillance and weapon systems. Similar devices were installed on a submarine of the Los Angeles Flight III type. Integrated with modern navigation aids, the AN / BPS-16 radar system, the AN / AVLQ-4 (V) 1 electronic warfare system, periscopes and other devices for various purposes.

An interesting feature of on-board electronics has been the widespread use of internal acoustic sensors. The boat placed 600 instruments tracking its own noises. For comparison, the previous project of a multi-purpose nuclear submarine included only 7 sensors.

The armament complex included eight 660-mm torpedo tubes. They were placed on the sides of the hull, due to which it was possible to free the bow compartment under a large hull. To reduce acoustic signature, the launch of torpedoes was carried out by the so-called. self-exit - without firing with compressed air. 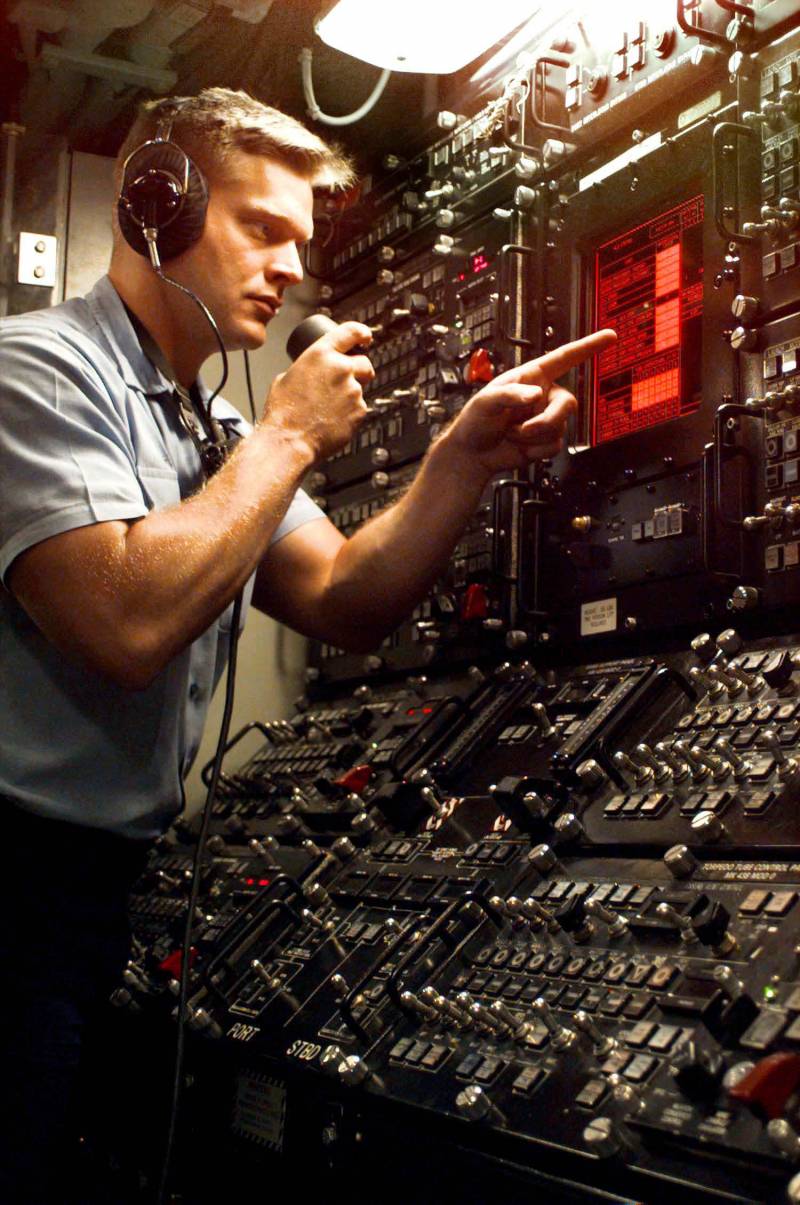 One of the arms control posts
The ammunition of the submarine included several types of torpedoes, sea mines, as well as UGM-109 Tomahawk and UGM-84 Harpoon missiles. The armament compartment hosts 52 missiles and / or torpedoes. The number and types of loaded weapons are determined in accordance with the assigned combat mission.

The crew of the ship consists of 140 people, including 14 officers. For them, there are common cubicles and separate cabins. Measures have been taken to increase the comfort of stay and service.

According to the initial plans, the U.S. Navy during the nineties were supposed to receive 29 new type of submarines. However, even at the design stage, it became clear that the use of new materials and technologies would lead to an unacceptable increase in the cost of the finished ship. Because of this, reduction plans began. At first, even before the start of the construction of the lead nuclear submarine, they decided to reduce the series to 12 units at a total cost of more than $ 33 billion.

On January 9, 1989, GDEB received a contract for the construction of a new nuclear submarine. The USS Seawolf (SSN-21) bookmark took place at the end of October of that year. It was planned to spend approx. 3 billion, which was the reason for criticism. For comparison, a Los Angeles-class submarine at that time cost approx. 900 million.

Already in 1990, calls were made to cancel further construction and limit themselves to one boat. However, in 1991, Congress nevertheless allocated funds for the construction of a second ship. The order for the third submarine was approved in 1992, but funding was postponed for several years. 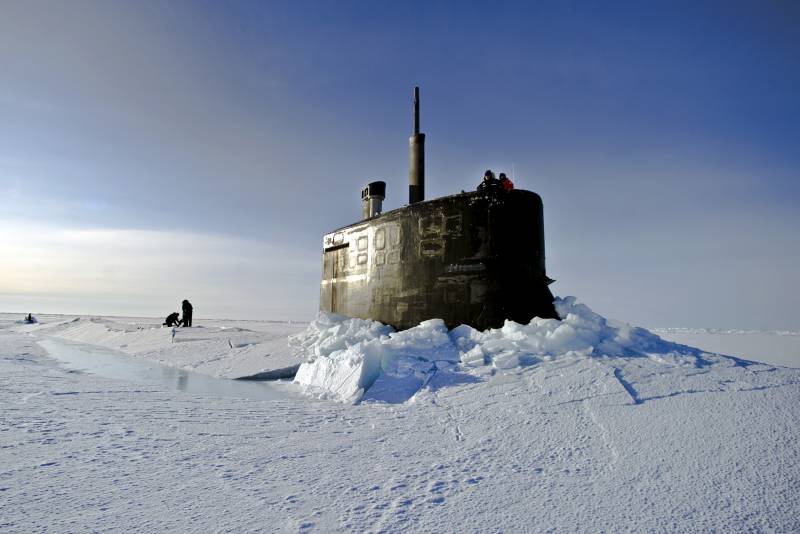 Submarine USS Connecticut (SSN-22) during exercises in the Arctic, March 19, 2011
The construction of the head submarine was difficult and lengthy. Launching took place only in June 1995. Two years went on sea trials, and on July 19, 1997, the USS Seawolf (SSN-21) became part of the Navy. 7 years and 9 months have passed from bookmark to delivery - not a single American submarine has been built for such a long time.

The second ship, USS Connecticut (SSN-22), was ordered in May 1991 and laid in September 1992. Launching took place on September 1, 1997. The boat was handed over to the customer in December next year.

Third in a series

Only in 1995, spending on the construction of the third Seawolf nuclear submarine, the USS Jimmy Carter (SSN-23), was included in the military budget for the next year. The contract for its construction was signed in June 1996, and the laying took place at the end of 1998. A few months later an additional order appeared. Multipurpose submarines should be turned into a special submarine capable of solving special problems. Additional work increased the project cost by $ 890 million.

An additional Multi-Mission Platform compartment with a length of approx. 30 m. It provides for additional cubicles for 50 fighters, a command post, airlock, storage rooms for special equipment and equipment, etc. Also, the MMP compartment carries various remotely controlled underwater vehicles. With the help of MMP, the submarine is able to transport combat swimmers and provide their work, perform various reconnaissance and sabotage tasks. 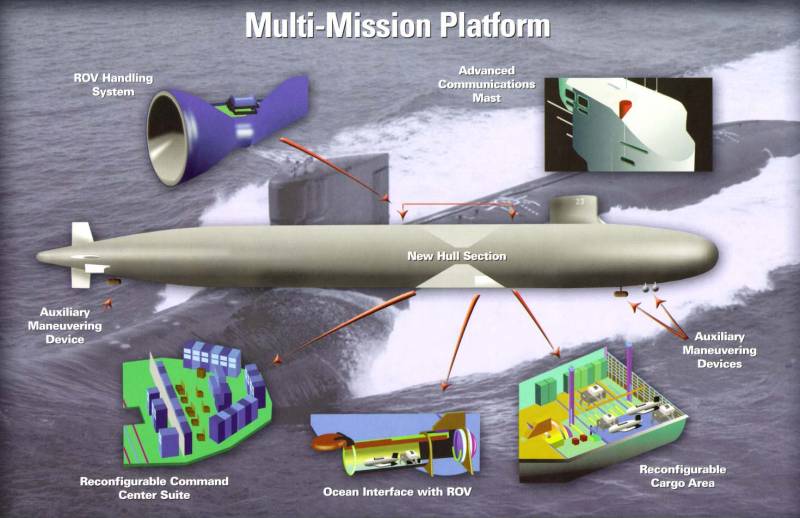 Features of the third ship of the project, USS Jimmy Carter (SSN-23)
As a result of the installation of an additional compartment, the length of the submarine increased to 138 m, and the total displacement exceeded 12,1 thousand tons. Due to the increase in dimensions, a propeller column had to be installed in the bow of the ship. Native weapons and equipment remained in their places. At the same time, combat and special capabilities have expanded markedly.

USS Jimmy Carter (SSN-23) was launched in May 2004. In February 2005, the ship became part of the Navy. At this, the construction of the Seawolf type submarine was completed.

U-boats in the service

The lead USS Seawolf (SSN-21) went into operation in 1997 and soon set off on its first trip. Since the beginning of 1999, the second ship, the USS Connecticut (SSN-22), has entered combat service. Two multi-purpose nuclear submarines perform the tasks of searching and detecting strategic missile carriers of a potential enemy. They are also attracted to escort ship groups for various purposes.

Over the past decades, two ships have repeatedly participated in combat deployment and in various exercises. Between these activities, minor and medium repairs with docking were carried out. In general, the first two submarines of the Seawolf type became full-fledged submarine combat units and supplemented the existing Los Angeles boats. Moreover, in terms of combat effectiveness, they exceeded their predecessors by 2,5-3 times.

More interesting is the service of the third ship of the series, equipped with a special MMP compartment and related equipment. USS Jimmy Carter (SSN-23) regularly goes to sea, solves some problems and returns to base. At the same time, the Navy is in no hurry to clarify the objectives of such campaigns, and the presence of special equipment on board serves as an allusion to the special nature of the missions. 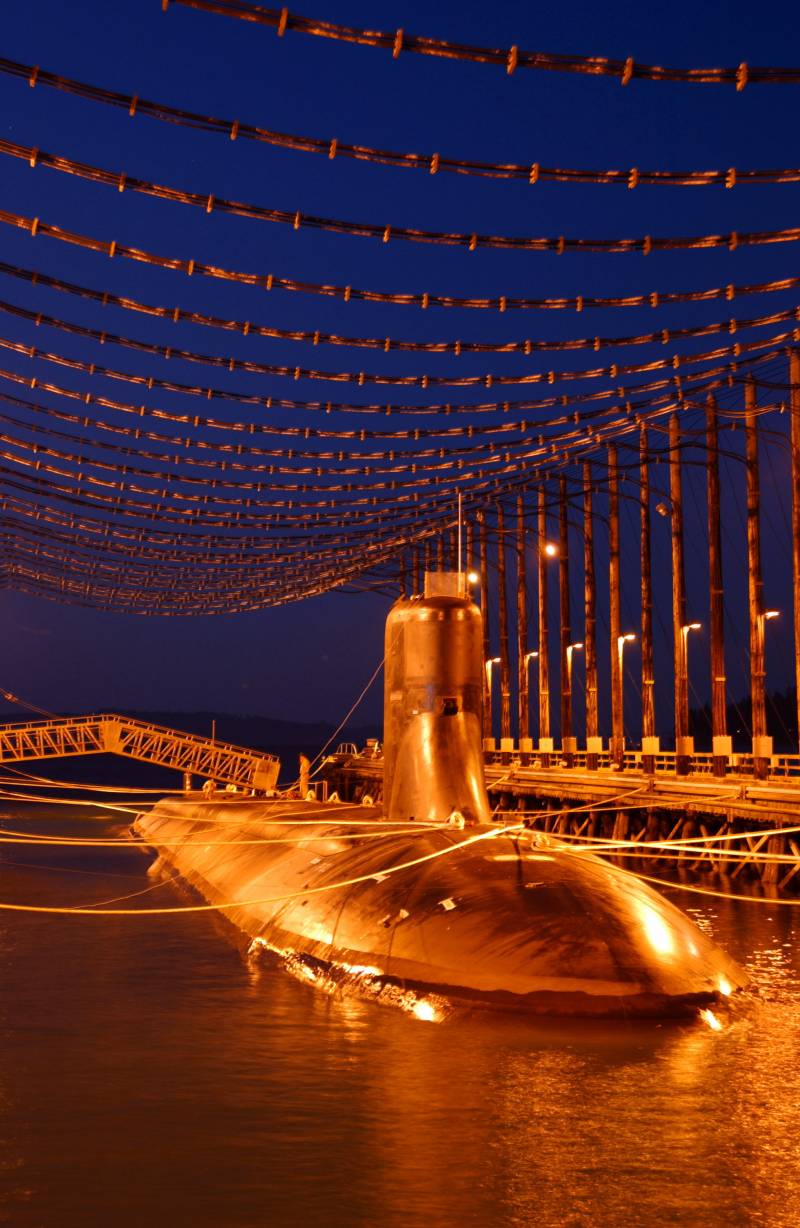 USS Jimmy Carter (SSN-23) on demagnetization, August 16, 2006
According to various sources, rumors and estimates, the submarine with the MPP compartment is used to provide special operations in remote regions. In particular, several years ago, in some publications, a secret operation was mentioned to install control equipment on the communication cables of a potential enemy. How true such reports are is unknown.

The aim of the Seawolf project was to create a promising multi-purpose nuclear submarine capable of effectively performing combat missions in the face of counteracting the developed enemy PLO. To do this, I had to apply a lot of new technologies, which led to an unacceptable increase in cost. The appropriateness of such expenses was in doubt, and the end of the Cold War actually put an end to the expensive shipbuilding program. The US Navy received only three Seawolf nuclear submarines, and one of them decided to rebuild for special operations.

Despite a sharp reduction in the Seawolf breakthrough construction program, the Navy needed a new multipurpose submarine. Virginia launched a new project - less bold, but cheaper. The construction of such boats began in 2000, and so far the fleet has received 18 combat units; 11 more are under construction.

In the new world that emerged after the Cold War, not only performance but also price became a decisive factor. And in terms of cost-effectiveness parameters, the Seawolf project was inferior to both previous and subsequent developments.