Platoshkin. Distribute money to entrepreneurs and celebrate a quarantine rally 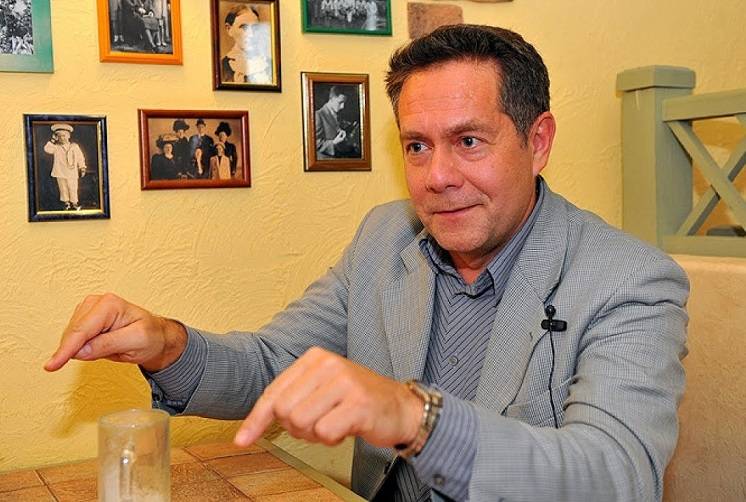 God sees, the author did not even want to touch the figure of Nikolai Platoshkin. Platoshkin has launched such a tumultuous activity in recent months that he has “set up” a noble network of flocks, which, as the flock is supposed to, explode in such a stream of impurities for any criticism of its guru that even the saints can take it out. And in the expression of the seed, the public is not shy. Apparently, they are taking an example from their idol, who sometimes strainedly overtures frankly yard slang. And his performance in Politcafe with a glass of cognac, accompanied by endless antics generally left a lot of questions about the influence of bad habits on the perception of reality and one's own status in this reality, since Platoshkin decided to go into new leaders.


But Platoshkin, continuing to openly politically parasitize on a pandemic that caused a global, and not just an intra-Russian crisis, published on his VKontakte page a notice about the rally (!) With a maximum of 150 people in Novorossiysk on October Square. I agree in a certain egoism, while Platoshkin is surfing the net, clogging up content that is already not suffering from purity, while he is marching around Moscow, where marching are either lazy or truly working, I was not bothered by his political attempts. However, the organization of a potential mass outbreak of the epidemic in the city, to which metropolitan attention does not fall so much, accompanied by doctors, equipment and adequate managerial personnel, could not help but draw my attention.

Populism under the red "gloss"

The media has become so firmly entrenched in the life of each of us that it becomes difficult, almost impossible, to remember how we know such a “familiar” physiognomy. So Platoshkin entered the list of recognizable physiognomies as an “expert”, whom now are like uncut dogs. Having gained recognition on TV, which is a very competent move to start, Nikolai Platoshkin rushed into politics.

Who was he before? In general, it is known. While the country was in a fever for 90 years, Platoshkin worked abroad. 5 years of the “Kozyrev” era in diplomacy, when all of Russia's foreign policy was merged, did not in any way give rise to a desire for resistance in the soul of the future “socialist”. Kozyrev took off from his post in 1996, and in 2019, being in exile in the USA, he criticized Russia and the USSR. It is funny that his former colleague Platoshkin, in the same year of 2019, founded his movement “For New Socialism”.

It is hard to understand what “new socialism” is, because after a couple of vague proposals, Platoshkin, in the process of answering this reasonable question, goes over to the usual tactics of criticizing the authorities. At the same time, he regularly posts Soviet posters, glorifies the achievements of the USSR, flaunts fiercely to defend the Soviet era, even if it comes to quite reasonable criticism. And again, Platoshkin acts very competently, using a kind of packaging gloss of vinaigrette of various kinds of nostalgia for the Union to identify himself, his beloved, in the left wing, which in Russia with her desire for justice has always been sympathetic. 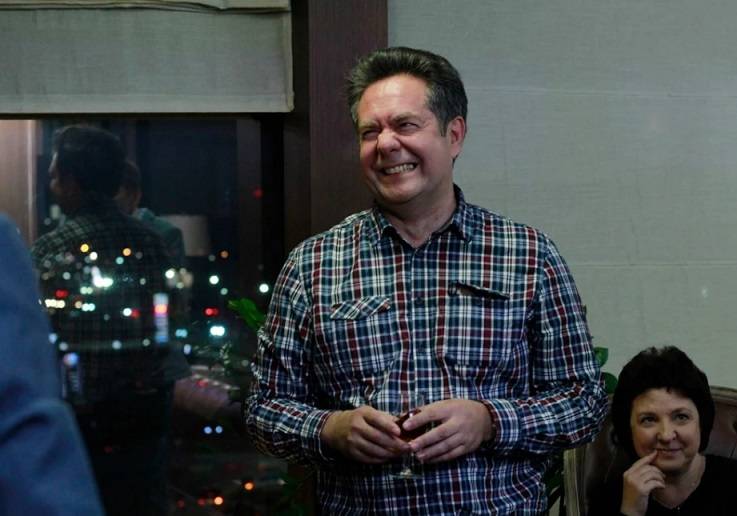 In fact, the founder of the “new socialism” should not dive into such depths as socialist ideology. After all, it was she who brought up people who are capable of going out of the trenches and dugouts in agony, without losing the presence of spirit. So the "new socialist" is forced to hang the same garland of fat carrots as the other opposition, in front of the nose of his flock. And how sweetly and convincingly the speeches of the “new socialist” sound, which continues to attract the satiety of Western countries: look at Germany, look at Sweden, be moved with France, etc. Once again, we are stitched with the image of the “right country” somewhere there. By the way, it was thanks to this Western scarecrow that was advertised in the 80s that part of the Soviet people convinced that it was "paradise" there.

And there is no paradox in the fact that a person who calls himself a “new socialist” constantly draws analogies with capitalist countries. Not. Firstly, you can call yourself anyone. Not a single party came to power on the slogans "poverty in every house, hanged - for every entrance." Secondly, as the author has already pointed out, it is similar to Platoshkin’s death to dive into a socialist ideology, since almost every item of his “program” in socialist society is paradoxical - from a “luxury tax” to a “capital export tax”!

The “short political program” itself, or “minimum program,” as indicated on the official website of the movement, is woven from the most popular demand items. And the nationalization of resources, and the abolition of the Unified State Examination, and the confiscation of the property of embezzlers ... There are, of course, items that simply openly buy a near-by philistine, such as “transferring part of the proceeds from the export of oil and gas to each Russian’s personal account”.

The author honestly searched on the official website of the "new socialists" or the "maximum program", or some practical ways to achieve what is already indicated in the "minimum program." As a result, the author did not find either one or the other. But the author was immediately offered to "become a deputy" or go to the "school of television" of some public television "For New Socialism". Judging by the trend, asking a question about what kind of society is being discussed is pointless.

And above all this, the spirit of the “leader” Platoshkin hovers. And precisely for this reason, he does not reduce the incandescence, so that the flock does not suddenly notice, under the gloss, an ordinary populist who is no different from Navalny. It’s already scary to turn on the kettle so as not to hear a familiar voice. In the fury of political struggle, Platoshkin spoke a lot, a lot. He advocates the priority of international law over national law, although now it is clear to all sane that international law is a tracing-paper of the law of the strong. The "new socialist" demands to give money to small businesses, "like in the USA," under the conditions of a coronavirus. Falling into a hysteria that is included in the populist’s functional as an obligatory item, Platoshkin begins to chop the same mantras as all pro-Western citizens. 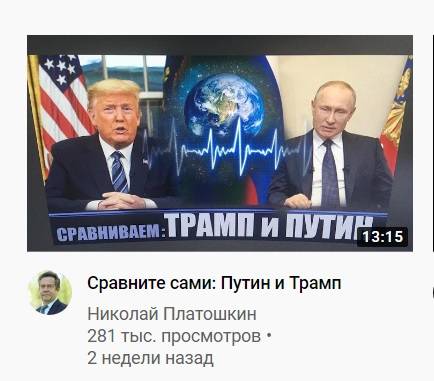 Platoshkin cannot do without a close look at the West
And the last pearl of the giant of thought, Platoshkin, was supposed to shake the seemingly socialist flock of "novosocialists". Following the president of the totally capitalist and aggressive US country, Trump, our “socialist” demanded compensation from China ... for the coronavirus. Well, even here Platoshkin cannot be original, he continues to look into the mouth of the Western imperialists. Maybe, after all, he should choose a liberal screen and stop disgracing the socialist idea, to which the author has deep sympathies ...

PR during the plague

And then the coronavirus struck. Against the background of the opposition bestiary, which rushed to catch a bloody hype on a pandemic, like the “doctor” Vasilyeva and her accomplice Navalny, Platoshkin had a great chance not only to distance himself from these citizens, but also to really build up a sane electorate cluster. One had only to support the initiative of self-isolation, which does not exclude criticism of the authorities for sluggishness ... It was possible to publicly, albeit crafty, abandon political disagreements in order to save the lives of citizens, which would be respected ... It was possible to collect help ... A lot of “could”. But the emptiness of the populist inside Platoshkin prevailed. And Ostap suffered ...

The situation with the coronavirus in Novorossiysk, as well as along the entire Black Sea coast, is complicated. In Tuapse, authorities even placed anti-tank hedgehogs at the entrance to the city due to an outbreak. Two ladies who returned from abroad, before talking to doctors about their poor health, managed to talk with a dozen people. As a result, the number of hospitalized has increased dramatically. The city was closed in a very radical way. 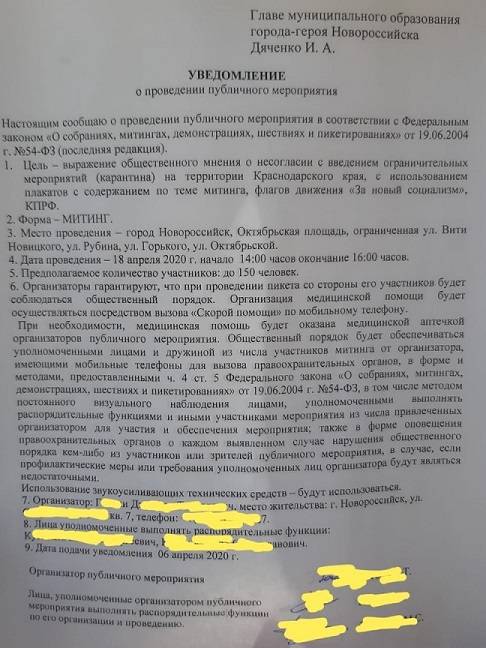 Not better in Novorossiysk. A woman who died in the city from a coronavirus was infected from her husband, who also recently returned from blessed other countries. The woman also managed to talk with many citizens. Only on April 1 she turned to a private clinic for help, where she was diagnosed with pneumonia, and was admitted to the state infectious diseases hospital on April 8th.

And against this backdrop, Platoshkin publishes a notice of the rally on his VKontakte page. At the same time, the rally “For New Socialism” is not the organizer of the rally, at least it is not mentioned. As stated in the notification, the rally "For New Socialism" and the flags of the Communist Party of the Russian Federation will be used at the rally. Moreover, by sending this notification to the official authorities, the organizers (or Platoshkin himself) managed to cover up all their data when publishing to the public. Well, the jammed phone and the address of the organizers do not raise questions, but the names and surnames ... What is it? From the series “I will give you parabellum, we will retreat to the mountains” ...

And it’s good if everything ends with the banal “two hundred rubles cannot save the giant of thought”, but alas.

We are in Yandex Zen
About Stalin and Khrushchev
What you didn't want to know about England
364 comments
Information
Dear reader, to leave comments on the publication, you must to register.