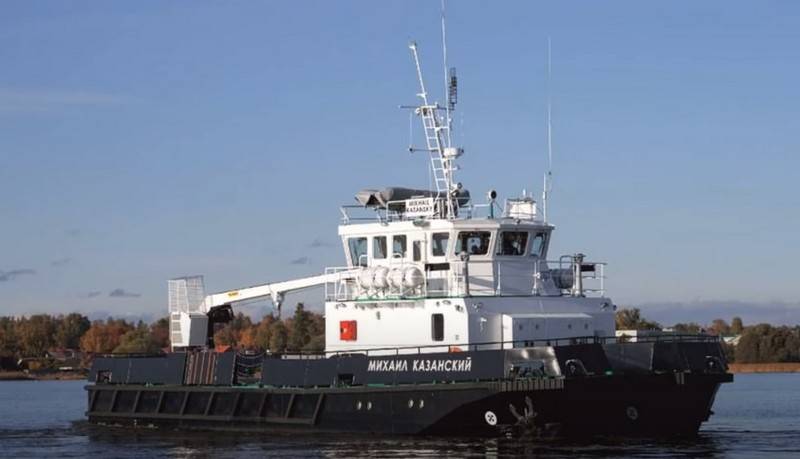 The lead boat of the project - BGK "Mikhail Kazan"

The third large hydrographic boat-catamaran of project 23370G will be laid in the interests of the Naval fleet Russia in July-August of this year. This was reported by the press service of the Russian Navy.

The third (second serial) large hydrographic boat-catamaran of project 23370G will be laid down for the Russian Navy at the KAMPO enterprise near Moscow in July-August this year
- said in a statement.

It is noted that the transfer of the boat is planned in 2021. The future boat does not yet have a name, an order is being prepared for the Commander-in-Chief of the Russian Navy, Admiral Nikolai Evmenov, to assign him the name of one of the prominent hydrographic officers.

Recall that the construction of boats of project 23370G is carried out by the manufacturer KAMPO in the suburbs. In total, three boats were ordered, of which the leading BGK, Mikhail Kazansky, serves in the Baltic Fleet, and the first serial, Aleskander Firsov, is located on the slipways in the Moscow Region. In July of this year, sections of the boat will be delivered to the construction site of the enterprise in Sevastopol, where the final assembly will take place. After passing the necessary tests, the boat will become part of the hydrographic service of the Black Sea Fleet.

The modular hydrographic boats of the catamaran type of the 23370Г project are the new version of the multipurpose vessels of the 23370М project. The displacement of the boat is about 140 tons. Boats are built in the interests of the Navigation and Oceanography Directorate of the Ministry of Defense of the Russian Federation for use by the hydrographic service of the Russian Navy.
Ctrl Enter
Noticed a mistake Highlight text and press. Ctrl + Enter
We are
In Vyborg they launched the 23370G project defense company for the Baltic FleetThe second BGN of the 23370G project was laid down at the KAMPO shipyard in Orekhovo-Zuevo
6 comments
Information
Dear reader, to leave comments on the publication, you must to register.