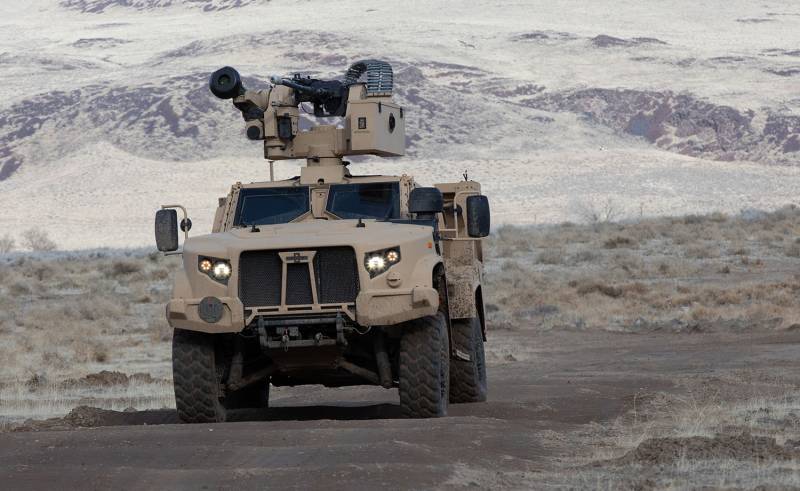 US Marine Corps fighters may soon receive a new tactical air defense system. The new complex, built on the basis of the light tactical JLTV, should replace the old models in the army, made on the basis of the Humvee army SUV. It is assumed that the new combat vehicle will be able to effectively combat unmanned aerial vehicles, helicopters and tactical aviation the enemy. At the same time, the US military is considering various weapons options: from automatic weapons and guided missiles to modern lasers and microwave guns.

JLTV, or Joint Light Tactical Vehicle (general light tactical vehicle), is a program that was launched in the United States back in 2006. As part of the program, the US military hoped to get a new family of combat light tactical vehicles with greater survivability and payload than the Humvee (in Russia they are often called the "Hammers" in the civilian version of the car). The new army SUV should partially replace the Humvee in the ground forces, marine corps, and in the command of special operations forces.

The final development of the new universal combat vehicle ended only in 2015. The winner of the competition was Oshkosh Corporation, which began mass production of new JLTV army off-road vehicles in 2016. The purpose of this program is to purchase 54 such vehicles by the US military. For Oshkosh, this is a very important deal, as the total amount of the entire program is estimated at 599 billion dollars. It is estimated that 47,6 new JLTV SUVs will be received by the army, and another 49 vehicles will go to the US Marine Corps. Deliveries of vehicles for the army are planned until 099, the Marine Corps should receive the bulk of the equipment earlier - until 5500. 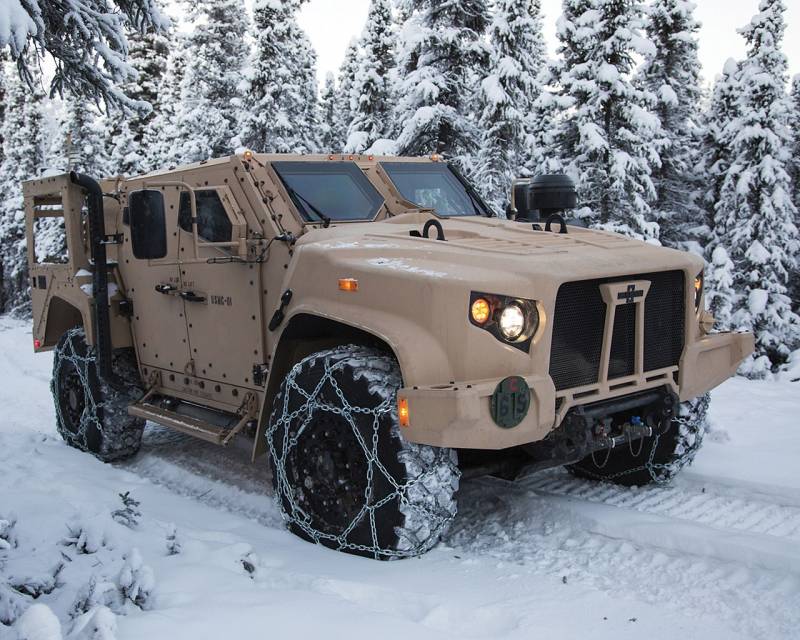 It was possible to establish full-scale mass production of new combat vehicles only in the summer of 2019. At the same time, foreign buyers have already appeared in the new American tactical car. The buyers of JLTV managed to become the armies of Lithuania, Slovenia and Montenegro. Negotiations on the acquisition are also leading the United Kingdom and Portugal, but there are no firm contracts for the supply of armored vehicles to these countries.

Oshkosh JLTV is presented in four main versions: the two-seat cargo version of the JLTV-UTL SUV (M1279 Utility), the four-seater general-purpose armored vehicle JLTV-GP (M1280 General Purpose), the JLTV-CCWC melee weapon carrier (M1281 Close Combat Weapons Carrier) and the model carrier of heavy weapons JLTV-GP (M1278 Heavy Guns Carrier - General Purpose). The M1278 model is initially planned to be equipped with a combat module with an automatic 30 mm gun. Work is also underway on the creation of other versions of machines, including sanitary and reconnaissance. The payload of the car - up to 1600 kg in the four-seater version and up to 2300 kg in the double allows you to install various weapons systems on board a tactical car.

A distinctive feature of the SUV are its good performance characteristics. The car received an intellectual independent suspension Oshkosh TAK-4i, which allows you to easily adapt to various options for routes and terrain. Gale Banks Engineering 6,6T V-866 8-liter diesel engine powered by 340 hp, paired with an Allison 2500SP automatic gearbox, provides the SUV with good mobility. The maximum speed on the highway is up to 110 km / h. At the same time, the manufacturer claims that on rough terrain and dirt roads Oshkosh JLTV moves 70 percent faster than the armored version of the HMMWV. 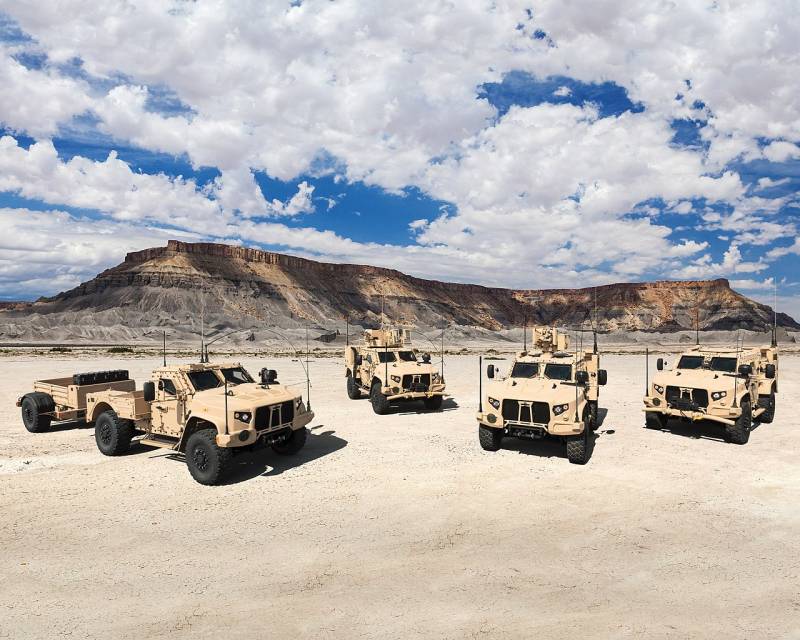 Variants of the tactical air defense system based on JLTV

The Marine Corps will receive most of the new light tactical JLTVs that will replace the Humvee by 2022. At the same time, the marines are not only interested in the usual versions of the SUV. Their interest is primarily focused on models that are carriers of various weapons. In the face of the new armored car JLTV, the American marines expect to receive a means of combating various air targets. In parts, such a machine should replace the M1097 Avenger complex. The new tactical air defense system should provide mobile protection for the advanced units of the marines, often operating in isolation from the main forces, from air strikes. First of all, from attacks by modern drones, attack helicopters and tactical aircraft of the enemy.

The fact that JLTV is a suitable machine for hosting various combat modules is beyond doubt of anyone. The payload and powerful engine make it possible to install on the JLTV chassis various variants of anti-air combat means from completely classical models to weapons based on new physical principles. Back in 2016, Oshkosh demonstrated a model of its car with a combat module equipped with a 30-mm automatic gun. In this embodiment, the firepower of a light tactical vehicle approaches traditional BMPs. Currently, the US military and industry are just working on choosing the optimal weapon configuration for the new tactical air defense system.

There are no problems with placing light air defense weapons on the JLTV chassis. And the same module with a 30-mm automatic gun will ensure confident destruction of air targets at an altitude of up to 10 thousand feet (up to 3050 meters). Another likely option called MANPADS Stinger. This complex was originally developed as a means of combating low-flying helicopters and airplanes and has proved itself to be excellent. This is a truly proven weapon that has already been used in a large number of conflicts around the world. At the same time, the US military is already armed with the M1097 Avenger air defense system based on the Humvee SUV. Such a machine is equipped with 8 Stinger missiles and two heavy 12,7-mm machine guns. It is assumed that the JLTV will also be able to carry up to 8 Stinger missiles, but this may not be enough in modern realities, especially to combat a swarm of small drones or low-cost ammunition. 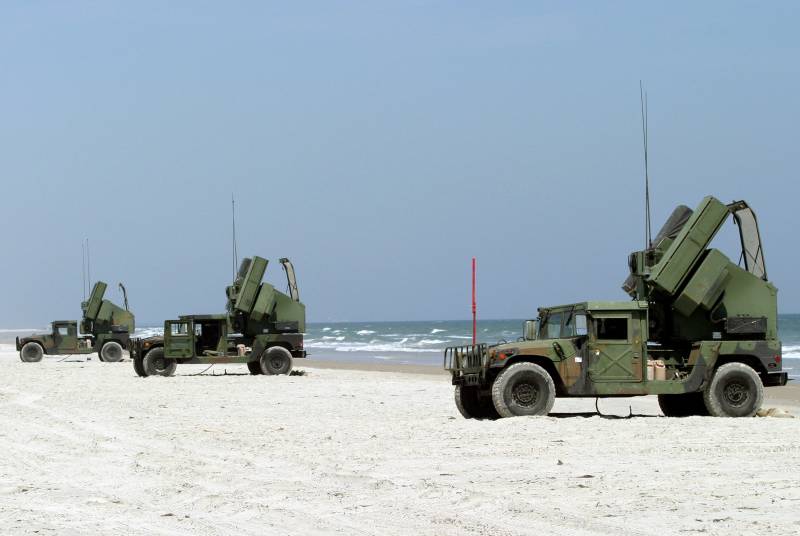 Complexes M1097 Avenger
The more exotic weapons systems include a laser system. It is assumed that on JLTV it will be possible to place combat lasers with power from 30 to 50 kW. It is believed that a power of 30 kW will be enough to deal with all models of unmanned aerial vehicles, and lasers with a power of 50 kW will pose some threat to aircraft. At the same time, theoretically, such an installation will have an unlimited number of shots, which is useful in the fight against modern drones, which are massively used even by terrorists.

Also considered is the option of using weapons of directed energy. It is known that the US Air Force in April 2020 began testing the THOR microwave gun (“Tor”), the main purpose of which is the fight against unmanned aerial vehicles. The American press emphasizes that the high-frequency emitter "Tor" most effectively fights with a swarm of drones. US Air Force Research Laboratory spokesman Kelly Hammett said Tor is a revolution in the use of directed energy. The THOR microwave gun was first introduced in 2019. It is known that the development process took at least 18 months and cost about $ 15 million. To defeat enemy drones, Thor uses short and powerful “flashes” of microwave radiation waves. At the same time, the developers claim that the weapon works on the principle of a flashlight. All drones falling into the irradiation cone of the installation fail. 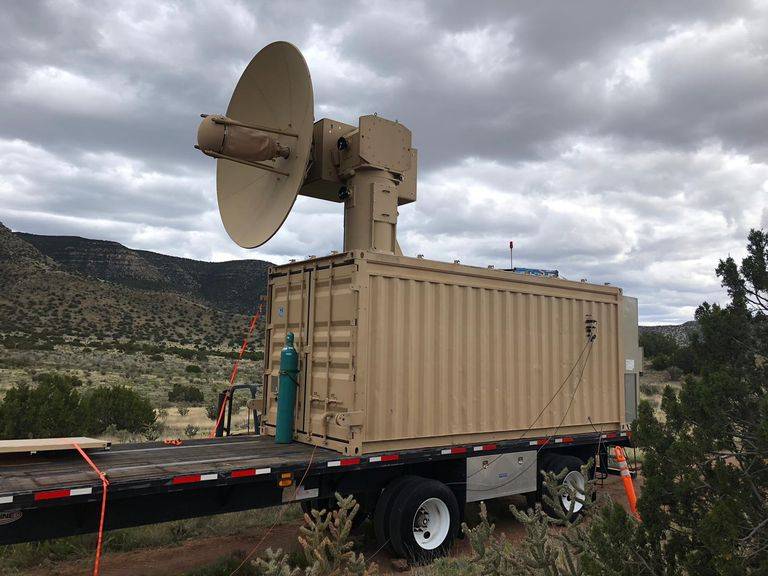 Pilot THOR
At the same time, experts are inclined to believe that the composition of the armament of the tactical air defense system based on the JLTV will be more prosaic. Most likely, the marines will receive a car armed with a 30 mm fast-firing automatic cannon, paired with a radar installation. This is the easiest option, as the 30-mm artillery system is already adapted to this chassis. At the same time, the capabilities of a 30-mm gun are enough to hit all types of air targets: from a quadrocopter to a jet fighter. And the high rate of fire of a weapon allows you to quickly hit several targets at once. At the same time, the JLTV air defense car is likely to receive missile weapons - all the same Stinger missiles, which will complement its combat capabilities.

Ctrl Enter
Noticed a mistake Highlight text and press. Ctrl + Enter
We are
Old and new ways of dealing with unmanned vehiclesUniversal anti-aircraft missile system C-300В
26 comments
Information
Dear reader, to leave comments on the publication, you must to register.