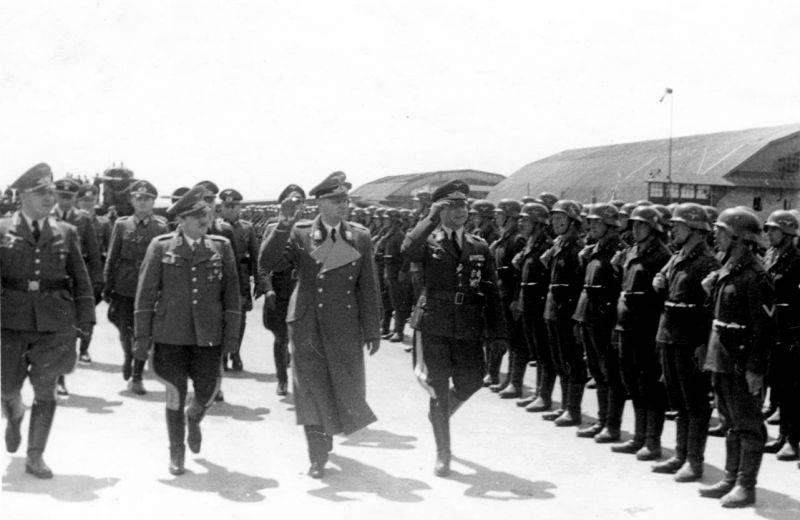 Reichsleiter Alfred Rosenberg greets Luftwaffe military personnel at the Brovary airfield near Kiev. To the left of Rosenberg is the Reich Commissar of Ukraine Erich Koch. Rosenberg arrived in Kiev with an inspection

In 1941, Nazi ideologist Alfred Rosenberg outlined to Hitler a plan for the dismemberment of the USSR-Russia. The essence of Rosenberg’s plan was to divide Russia forever so that the Russian world and the Russian people would lose unity.

In January 1941, Alfred Ernst Rosenberg, one of the most influential members and ideologist of the National Socialist German Workers' Party (NSDAP), the head of the NSDAP Foreign Policy Directorate, presented several reports to Hitler describing the plan for the "perestroika" of the Soviet Union after the victory of the Third Reich. Ukraine, Belarus, the Don and the Caucasus became "independent", they cut off part of the territory of Great Russia, the rest of Russia became a reservation, a place for deportation.

Interestingly, Rosenberg himself was a "Russian German." He was born in Revel-Tallinn in 1892 (then the Baltic was part of the Russian Empire) in a family with German and French roots. He studied at the Revelsky Real School, the Riga Polytechnic Institute, in 1918 he graduated from the Moscow Higher Technical School, received a diploma in engineer-architect. He tried to join the German volunteer corps in the Baltic states, but Rosenberg was not taken as a “Russian”.

He moved to Germany, where he became a member of the esoteric "Thule Society", made friends with Adolf Hitler and in 1920 became a member of the NSDAP. He became one of the main ideologists of the Nazis, the editor-in-chief of their central print media - Völkischer Beobachter (German: Völkischer Beobachter, People’s Observer). Rosenberg had a serious influence on the formation of Hitler's views; his ideas were included in the book “My Struggle”. In 1930, Alfred Rosenberg published his work Myth of the XNUMXth Century, which became one of the main works of the Nazis.

After the Nazis and Hitler came to power, Rosenberg became one of the leaders of the Reich. Since 1933, he headed the Foreign Policy Department of the NSDAP, since 1934 he has been authorized by the Fuhrer to control the general spiritual and ideological education of the NSDAP. Since 1940 - Head of the Central Research Institute for National Socialist Ideology and Education. Rosenberg established the so-called Reichsleiter Rosenberg Headquarters, which was formally supposed to be engaged in the creation of a research library, but during the war years it became a marauding organization that seized culturalhistorical values ​​in the occupied lands. In July 1941, Rosenberg became head of the Reich Ministry for the Occupied Eastern Territories. The ministry included: Reichskommissariat "Ostland" (capital - Riga), which included the Baltic States and part of Belarus; "Ukraine" (Rovno) - part of Ukraine and Belarus, it was planned to form Reichskommissariats "Caucasus", "Moskovia" - the central part of Russia to the Urals, "Volga-Don" and "Turkestan".

In fact, the huge occupied territories of the USSR were transferred under the control of Rosenberg. True, Rosenberg himself and his ministry did not enjoy much influence. Rosenberg was pressed from the imperial Olympus of the Reich by more active and efficient "predators." So, J. Goebbels took away the scope of propaganda. The head of the Party Chancellery of the NSDAP, the personal secretary of the Fuhrer Martin Bormann and the Reich Commissioner of Ukraine Erich Koch gradually pushed Rosenberg away from the Fuhrer, deprived of real power. 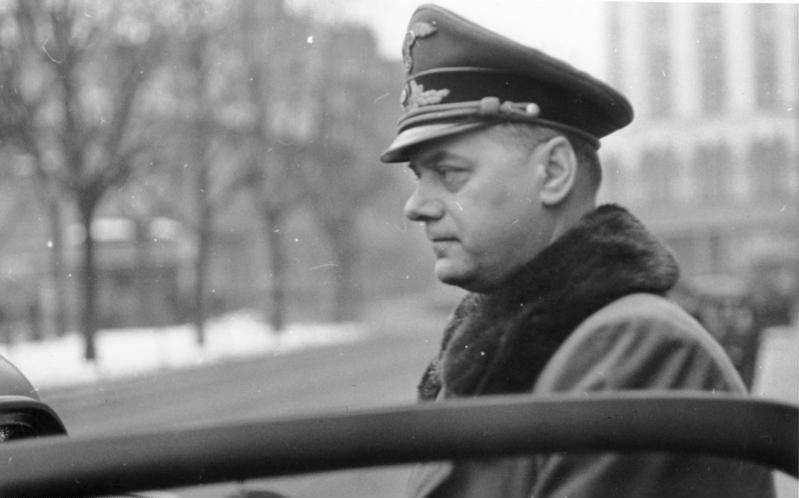 The Baltic states were planned to be fully Germanized over two generations. Part of the Baltic population was going to be deported to Belarus and Great Russia. Much attention was paid to Ukraine - Little Russia. The Germans understood that there would be no Great Russia without Ukraine, Southwest Russia, tens of millions of Russian-Ukrainians. In fact, the Nazi plans here were a continuation of the plans of the ruling elite of the Commonwealth, Austria and the Second Reich. Our enemies wanted to split, divide the united Russian people, to pit its parts together. Take control of the western part of the Russians, the Ukrainians of Little Russians, and use them in the fight against the rest of the Russian people.

Rosenberg proposed to create an "independent" Ukrainian state, which would be in close, indissoluble alliance with the German Empire. Hitler immediately made an amendment - he only agreed to a protectorate. To create Ukrainian statehood, according to Rosenberg, the cultivation of the Ukrainian language, such a development of the education system, is required to change the consciousness of the people. For people to focus on their own "independence" and alliance with Germany. In fact, the same thing has been done since 1991 - focusing on the "development" of the Ukrainian language and history, reforming the education system, cultivating the idea of ​​independence and an alliance with the EU, the USA and NATO.

The future of Ukraine is the breadbasket of Europe (European Reich). Ukraine should be a supplier of bread to the Great Reich. And here we see how the post-Soviet leadership of Ukraine fully realizes the ideas of the ideologists of the Reich. Ukraine is a colony of the European Union, a market for European goods, a source of raw materials, primarily agricultural, forest. High-tech industries (space, rocket science, shipbuilding, mechanical engineering, aircraft manufacturing, etc.) inherited from the USSR die. The people are rapidly degrading spiritually, culturally, intellectually and physically, and are rapidly dying out. Ukrainians-Russians pitted with Russian-Great Russians.

Crimea as a fertile land, which in the past was inhabited by German Goths, was to become part of the Reich. Become a German health resort. In particular, Hitler approved the renaming of Simferopol to Gothenburg, and Sevastopol to Teodorichsgafen. It was planned to join part of the Kursk and Voronezh regions to Ukraine.

The Caucasus was primarily interested in the Nazis as a source of oil. Georgians were considered the most culturally developed people of the Caucasus, most strongly associated with European culture, so they should have become representatives of the civil and military authorities of the Reich in the region. The Caucasus, like Ukraine, was also to become an anti-Russian land.

To weaken the central part of Russia - Great Russia, the core of the Russian state, it is necessary to separate the Don and the Volga region. Rosenberg noted that here among the population, national identity is not so pronounced as in Ukraine and the Caucasus. Therefore, the management of this territory should be carried out by more cruel methods. It is possible that they will bet on the Volga Germans, or they need to be relocated to Ukraine to strengthen its colonization.

Belarus was considered backward territory, both economically and culturally. A large percentage of the Jewish population was also noted (Jews of the USSR the Nazis destroyed without exception). The creation of an independent state and nation was considered as an extremely long and complex event. It was proposed to make the capital of the region Smolensk. Attach part of the Smolensk and Tver regions in Belarus.

Great Russia, the central region, had the greatest potential, on the basis of which the Russian Empire and the Soviet Empire were created. Therefore, it was proposed to weaken Great Russia as much as possible. The weakening of the central part of Russia was carried out by several methods: 1) the complete destruction of communist statehood without creating a new state apparatus in the future; 2) large-scale economic exploitation, in fact, looting: confiscation of all resources, wealth, machinery, transport, river fleet etc. In fact, Russia was deprived of its industrial and economic potential, its transport communications and connectivity were destroyed; 3) Great Russia was "circumcised" in favor of other Reich Commissariats - Ukraine, Belarus, the Don. Thus deprived of part of the resources and population. Also, Great Russia-Muscovy was considered as a zone of deportation of the entire undesirable population from other regions. Given the deprivation of Muscovy's economic potential, developed agricultural regions (Don - Volga region, Northern Caucasus, Ukraine), the Great Russians and deported Belarusians, Little Russians, etc., were doomed to mass starvation and rapid extinction. 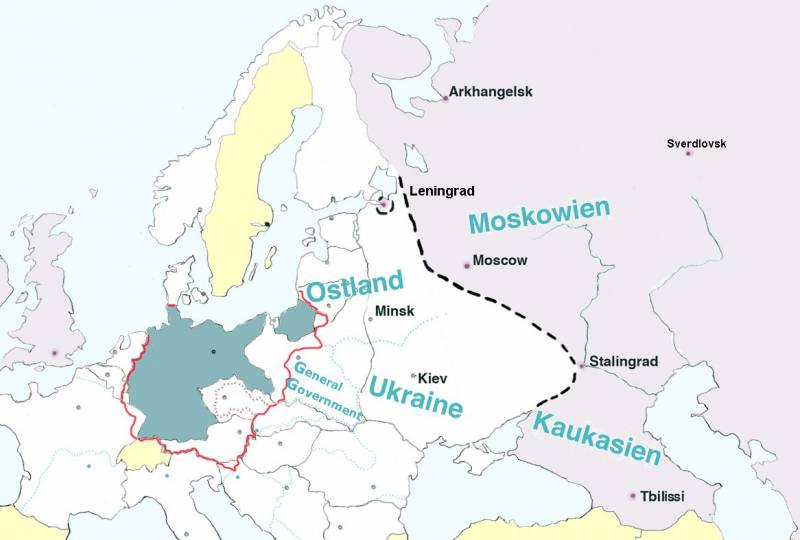 Reichskommissariat on the General Plan Ost (1941)

The essence of Rosenberg’s plan was to divide Russia forever. So that the Russian world and the Russian people lose unity. Russia cannot simply be captured, it is necessary to separate and destroy its civilizational, state-forming and cultural core - the Russian superethnos, uniting other indigenous ethnic groups of Russia-Russia around its culture, history and language.

To destroy Russian civilization, it is necessary to divide it into many weak national autonomies, which will be under the protectorate of the Third Reich. Skillfully pit them together, so that they could never become a threat to Germany in a constant squabble and swara. The main stake was placed on separatists and small-town nationalists.

First of all, the Nazis sought to pit the Russians with the Russians, destroying the source of power of the Russian people. So, from the southwestern part of the superethnos of Russ-Russians - Ukrainians-Little Russians, they planned to make a "battering ram" aimed at Russians-Great Russians. It turned out to be a kind of “ethnic chimera” - Russians by origin who fiercely hated everything Russian: the Russian language, culture, history, traditions and faith. Ukraine became the “policeman” of the Reich in maintaining control over the rest of Russia. Moreover, the Russians-Ukrainians themselves were a “one-time tool”. They initially turned into powerless and uneducated slaves, doomed to extinction from disease, hunger and alcohol.

The rest of Russia was also planned to be divided into many "independent" state formations. To turn a single Russian people into a mass of small nations. Return Russian to the distant past. When the inhabitants of Novgorod, Pskov, Tver, Moscow and Ryazan lived on their own and regularly fought with each other. One could go further, to the unions of Slavic Russian tribes - Novgorod Slovens, Vyatichi of Moscow and Ryazan, Krivichy of Polotsk and Smolensk, etc. According to Rosenberg, the small Russian sub-ethnic groups were not dangerous, and their energy was completely absorbed by the struggle with each other.

Thus, Nazi ideologists were going to divide Russia and the Russian people into many small state formations and sub-ethnic groups, completely dependent on the Reich. They were pitted against each other. For example, Ukraine and the rest of Russia. Russian power and energy were destroyed in internal wars. That is, Russia-Russia was returned hundreds of years ago, during the period of feudal fragmentation. The people were doomed to constant cultural and economic degradation and extinction. The Germans, as the “highest race," were given the opportunity to easily colonize the western parts of Russia. In particular, the Baltic states, Belarus, and Crimea were subjected to Germanization and were supposed to become part of the Eternal Reich. The local population was partially destroyed, partially evicted, and partly subjected to Germanization and assimilation. Some were left as slaves, wordless, and deprived of education and medicine.

After the defeat of the Reich, these plans were not forgotten. They passed "by inheritance" to the USA and the NATO bloc. In fact, when Gorbachev and his team smashed the USSR-Russia, they realized the plans of the Nazi elite and ruled the West in relation to the Russian world and the Russian people. United Russia was dismembered, its historical parts were torn away, including the ancient capital of the Russian state - Kiev. The Russian people became the largest divided ethnic group on the planet. They divided the Russians, they began to turn them into separate sub-ethnic groups, pitting against each other. 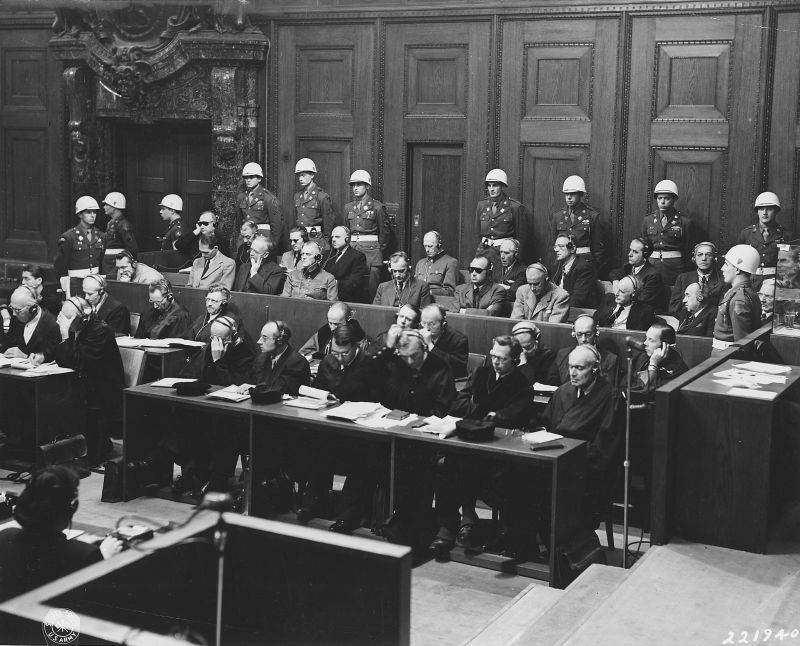 Ctrl Enter
Noticed a mistake Highlight text and press. Ctrl + Enter
We are
Maniac of liberalismValentin Falin: West and Russia in the XX century: connection of times
70 comments
Information
Dear reader, to leave comments on the publication, you must to register.