Russian weapon constantly attracts the attention of the foreign press. On April 11, the British edition of Mirror published its material on the Russian high-precision rifle SVLK-14 "Twilight". The general admiration of the article begins with the headline: “'Game-changer' world deadliest Russian sniper rifle accurate from two miles away” - “Changing the rules: the world's deadliest Russian rifle certainly hits from two miles."

Mirror writes that the “Dusk” rifle from the Integrated Systems Design Bureau is called the deadliest weapon in its class that can “change the rules of the game.” In the hands of a well-trained shooter, she is able to effectively hit targets at a distance of 2 miles (more than 3 km).

The weapon weighs 10 kg and costs 30 thousand pounds. It has no store and is charged manually. Allegedly, SVLK-14S can conduct accurate fire at distances of 2 or even 3 km, while the British army sniper rifle L115A3 hits targets at only 1500 m.

The publication cites the words of the chief engineer of the development company Yuri Sinichkin. He noted that Dusk is a piece of goods, like Ferrari or Porsche cars. This rifle is intended for professional snipers who need a tool for high-precision long-range shooting, as well as for lovers of such weapons. 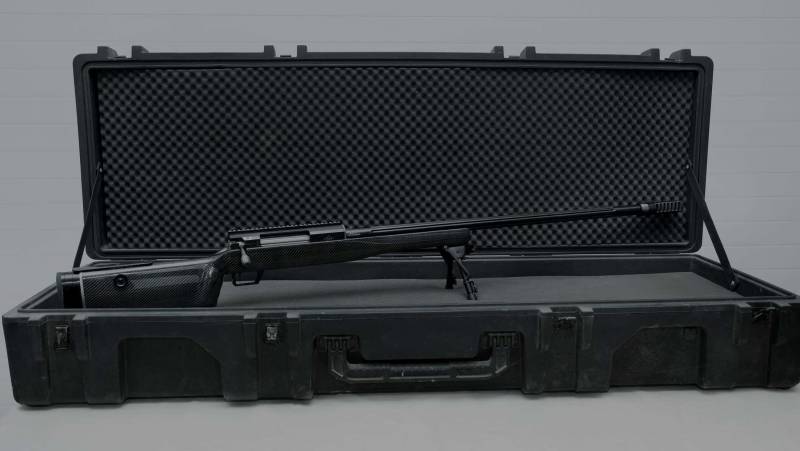 The rifle uses a .408 Cheyenne Tactical cartridge (10,36x77 mm) and accelerates the bullet to 900 m / s - almost three times faster than the speed of sound. According to Yu. Sinichkin, such a bullet can penetrate a rail 30 mm thick. It is also proposed to imagine what will happen to the enemy in the event of a bullet from which no bulletproof vest will save.

Mirror quotes an unnamed intelligence officer at the Royal Military Police. He believes that a rifle capable of hitting targets from two miles can really fundamentally change the situation on the battlefield. He also noted that such weapons should be highly reliable. Before pulling the trigger, the sniper must make several critical decisions - and the rifle must not let him down.

The Mirror newspaper article was noticed by other British and foreign publications. They placed in her reprints or modified and supplemented versions.

High marks from the foreign press are quite understandable. The Russian rifle SVLK-14C, first introduced several years ago, really shows unique characteristics and can be considered one of the best examples of the world in its class. It is specially designed for high-precision shooting at extremely long distances - and has repeatedly confirmed its potential. KBIS company regularly talks about new experiments and the success of this weapon. 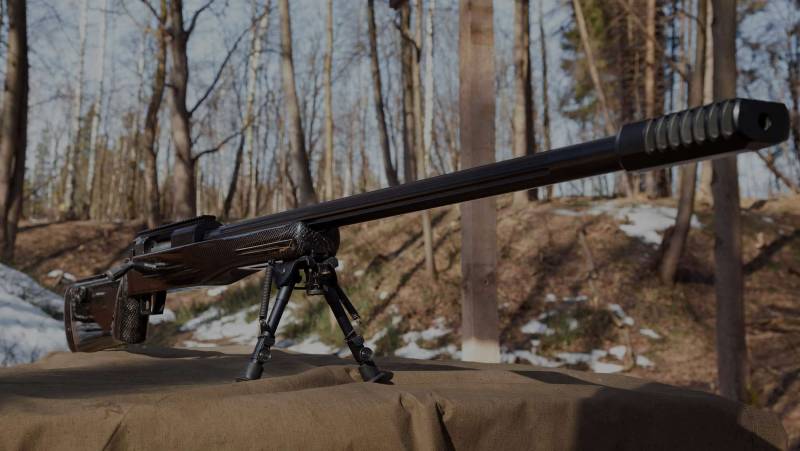 "Dusk" is a single-shot rifle with a longitudinally sliding bolt, lockable by rotation. It is equipped with a rifled barrel with a SHG contour 900 mm in length of the required caliber. There are modifications under the cartridge .408 CheyTac, .338 Lapua Magnum (8,6x70 mm) and .338 Winchester Magnum (8,6x64 mm). In the basic configuration, the barrel is equipped with a muzzle brake type T-Tuner.

The rifle has a trigger with an adjustable trigger pull. The receiver is equipped with a standard bar for mounting sights. Also, weapons can be equipped with a silent shooting device or other muzzle devices instead of the base and bipod.

Muzzle velocity of a bullet depends on the type of cartridge, but in all cases exceeds 900 m / s. The maximum effective range is more than 2500 m. Technical accuracy of a group of 5 shots from 100 m is 0,3 MOA; the distance between the centers is 9 mm. The fighting qualities of the rifle were repeatedly confirmed in tests. So, when shooting during the day, we managed to get a range of more than 4,2 km and at night - 2 km. 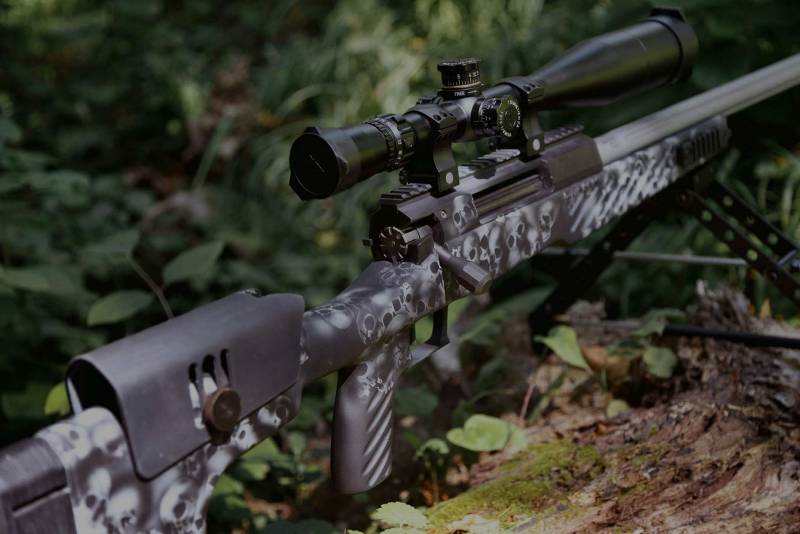 Outstanding specs come at a price. According to the manufacturer’s website, SVLK-14S in the basic configuration will cost the customer 1 thousand rubles.

The declared and confirmed characteristics are achieved due to the correct choice of technical solutions and the widespread use of modern materials and technologies that most fully meet high requirements. All this significantly complicates the production (and increases the cost), but gives a known result.

It is reported that the "Twilight" are equipped with match trunks only basic special circuits. The barrel is mounted on the receiver and hung over the stock - a standard solution for modern high-precision rifles.

The receiver is made of aluminum alloy, also used in aircraft manufacturing. This part is complemented by a threaded insert made of high alloy steel. The same alloy is used in the manufacture of the bolt group. Aluminum and steel are selected to ensure durability that matches the loads of high-power cartridges of the .408 CheyTac type.

When developing rifles abandoned the use of the store. This allowed to make the receiver without a receiving window and thereby increase its rigidity. The overall strength and rigidity of the structure makes a great contribution to obtaining all the necessary characteristics. 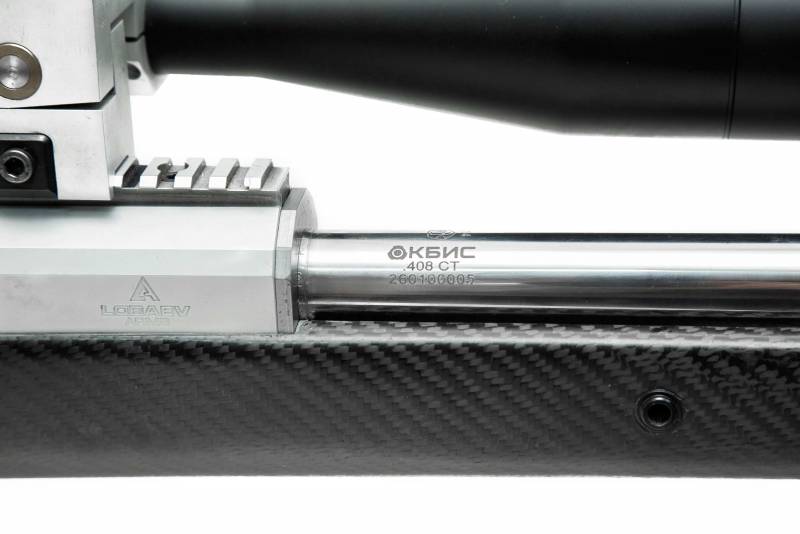 In the SVLK-14S project, a used King v.3 type shutter group was used. However, for "Dusk" it is made with higher requirements that exceed the standards of the arms industry. Due to this, the shutter combines high strength and enhanced combat characteristics. The shutter may have a larva under the cartridge of one of three types.

The issues of strength and stiffness associated with accuracy and range were also resolved when developing a new box. The bed is a multilayer part made of fiberglass, Kevlar and carbon fiber. The composite part has an aluminum chassis. The resulting design shows sufficient strength to work even with the powerful .408 CheyTac cartridge.

Thanks to the use of all the most modern ideas and solutions, the SVLK-14S “Twilight” rifle is capable of showing high technical and combat characteristics. In the hands of an experienced shooter who possesses the necessary skills and techniques, such a weapon can accurately hit 2-3 km or more, as has already been shown in practice.

It is expected that such weapons will attract the attention of foreign experts and the media, and will also become the protagonist of new publications. The British newspaper Mirror and other media outlets write about Twilight, clearly admiring the highest performance of this rifle. The opinions in the comments on such publications are divided. Some readers are also surprised at the achievements of Russian industry, while others doubt the fact of the record or the very necessity of such a rifle.

Despite disputes, Russian high-precision small arms are gaining fame abroad, and in the widest circles. Perhaps the latest publications in the British media will become an additional advertisement for the “Dusk” rifle and other KBIS products under the Lobaev Arms brand.

We are in Yandex Zen
SVLC-14С rifle: records and prospects
New rifles V. Lobaeva
50 comments
Information
Dear reader, to leave comments on the publication, you must to register.