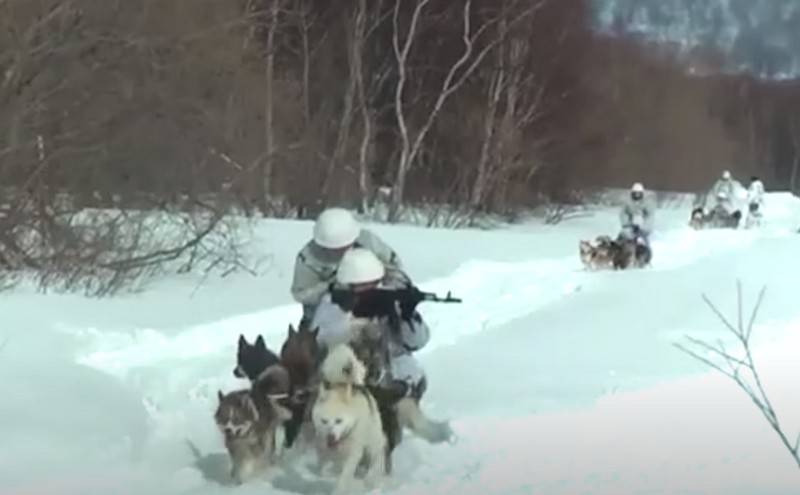 Pacific Marine Corps exercises held in Kamchatka fleetin the framework of which for the first time dog teams were used to move the marines. This was reported by the press service of the Pacific Fleet.


Pacific Fleet Marine Corps units at the Radigino training ground in the Kamchatka Territory conducted exercises in which for the first time they used snowmobiles and dog teams to help overcome snow cover lying in the region for about six months, and also to move in the taiga. The servicemen learned to drive teams, move behind snowmobiles and sledges "in a couple" of six people in an area where it is difficult to use other military equipment.

(...) individual tasks of the combat training course were solved using snowmobiles and dog teams. Such methods of transportation in conditions of significant snow cover, characteristic of the region from the end of autumn until April, allow mobile groups of marines to successfully overcome rugged terrain and act in the taiga
- said in a statement.

Marine units worked out the tactics of raiding, carried out the landing of tactical groups from snowmobiles and sledges, after which they fought with a conditional enemy, during which "they blocked and neutralized a group of conditional terrorists."
Ctrl Enter
Noticed a mistake Highlight text and press. Ctrl + Enter
We are
The defense order for the production of snowmobiles and all-terrain vehicles is carried out ahead of scheduleAirborne military snowmobiles begin to enter for use in arctic conditions
28 comments
Information
Dear reader, to leave comments on the publication, you must to register.