Tractor of strategic purpose. MAZ-537: from Minsk to Kurgan 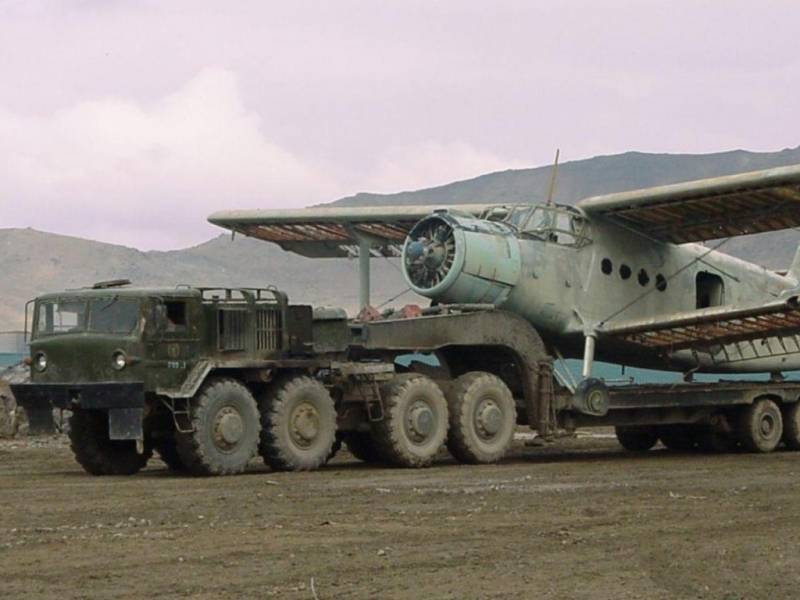 The rapid development of rocketry in the Soviet Army required tractors of the appropriate format and in large numbers. The Minsk Automobile Plant, which developed the family of the country's first heavy tractors MAZ-535/537, managed to assemble only 1960 cars by 15. There were many reasons. There were not enough workers and engineers, equipment for the manufacture of parts, as well as space for the assembly production. The MAZ pilot production workshop was not completely ready and did not chronically cope with the fulfillment of planned targets. And in 1960, the special production of the Minsk Automobile Plant received an order immediately for 90 tractors. The fact that strategic products were under special control at the USSR Ministry of Defense was mentioned in previous parts of the story. But this plan was not yet final. On January 15, 1960, a commission of the Presidium of the Council of Ministers of the USSR obliged the special production of MAZ, taking into account the resulting debt, to deliver already 116 vehicles during the year! It was stress not only for the Minsk plant, but also for the whole republic. The Belarusian Automobile Plant, the Mogilev "Electric Motor", as well as the leading enterprises of the capital of the BSSR: tractor, bearing, motor, machine-tool plants and automatic lines factory were involved in the execution of the order of the Ministry of Defense. The pilot production workshop was allocated in an emergency order 218 units of metal cutting, 25 forging and pressing, 20 thermal, 30 welding and 115 units of laboratory equipment, as well as 15 special machines. Earlier, to expand production, Minsk SKB-3 issued an order for the development and production of 750 special devices, stands and 120 cold dies. This allows us to understand how the MAZ-535/537 series was new for the domestic industry - the production of equipment for assembling tractors was separately organized. A big problem was personnel shortage. To master the production of complex equipment in such a short time, replenishment by experienced engineering and technical personnel was required. It was practically impossible to find such specialists outside the Minsk Automobile Plant, so the workers were removed from other production lines and transferred to the secret stocks of the pilot production workshop. There were not enough engineers and SKB-1, the main developer of new special MAZs, so it was decided to allocate at least 1000 square meters of departmental housing to retain personnel on the ground. To solve the problem of national importance, the leadership of the republic and the car factory did not spare any resources. 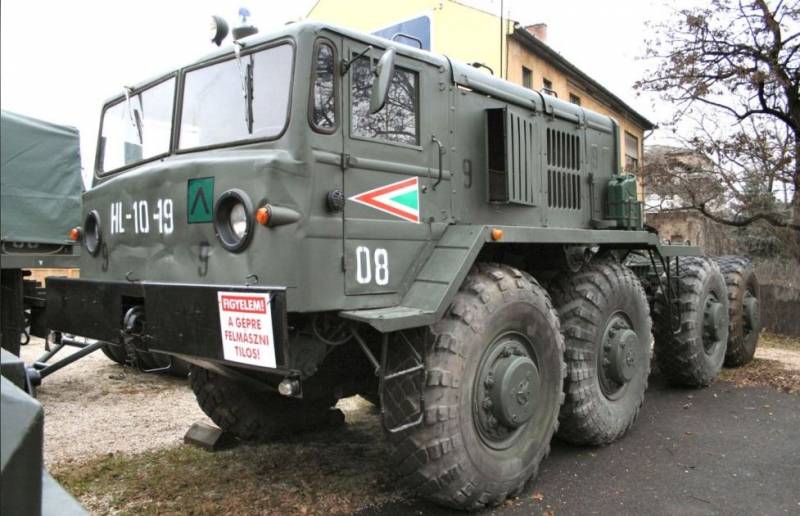 MAZ-537 aircraft of Hungary. Source: drive2.ru
As the flywheel spun for serial production of heavy MAZs, the problem of evaluating the operation of new equipment arose. The army has never encountered such sophisticated equipment before - in many ways even Tanks were simpler in design solutions, so there were a lot of issues regarding the operation of multi-axle tractors. For effective interaction with the military operating the MAZ-535/537, on August 2, 1960, an automobile operation bureau was established. 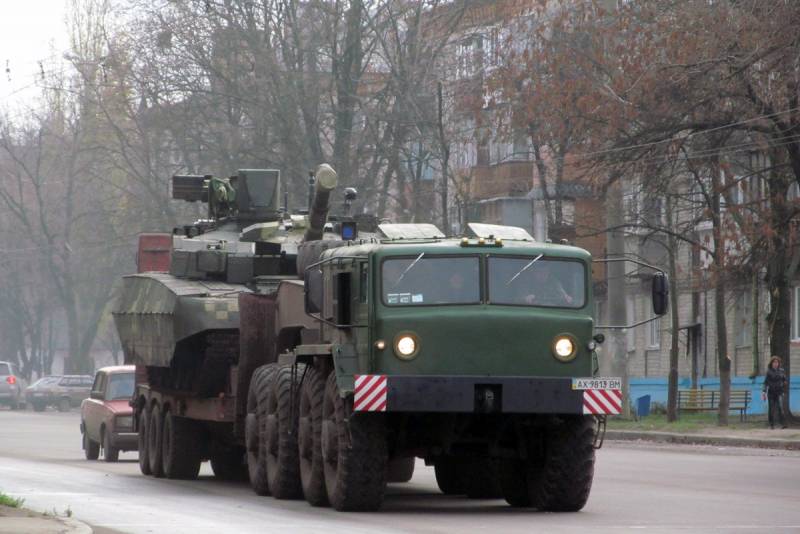 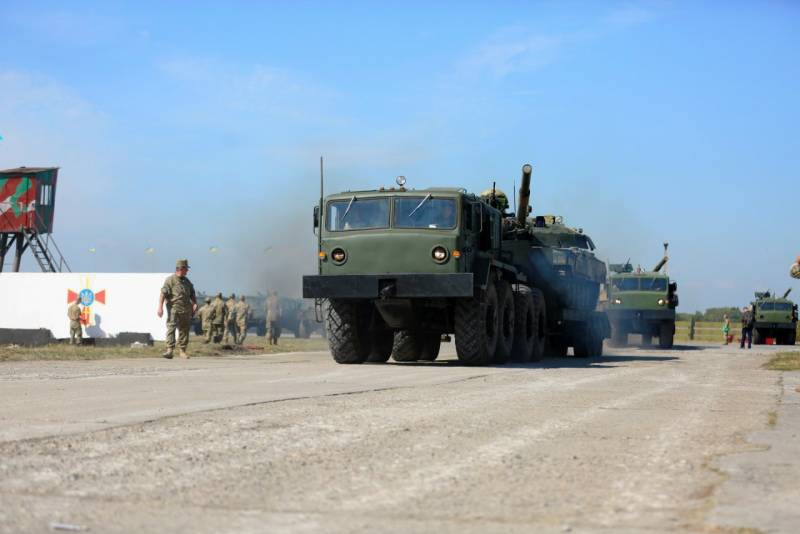 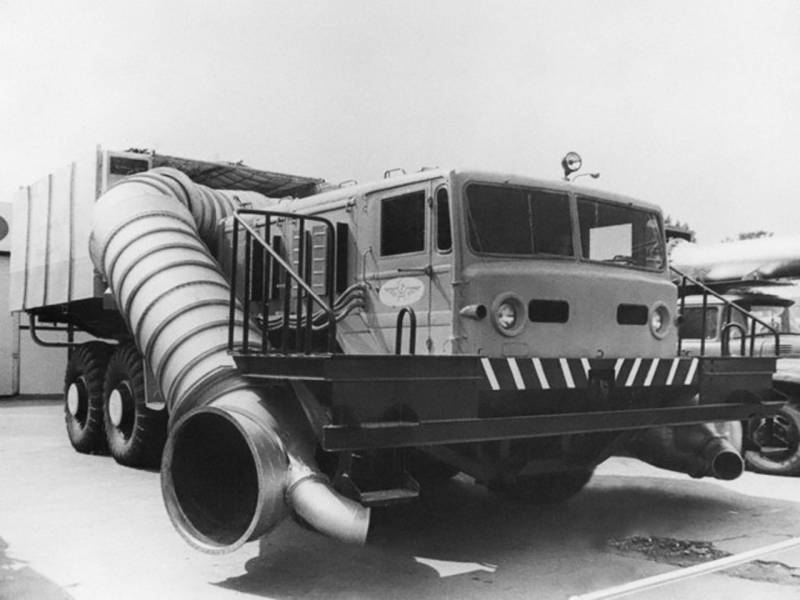 Airfield car. A jet engine was located on the cargo platform, supplying a gas stream to two arms in front of the MAZ. The machine cleared the runways of military airfields. Source: vk.ru
It is noteworthy that only two years after launching into mass production from May to November 1960, the first large-scale tests of new machines were carried out. Three MAZ-535A tractors passed 20 thousand kilometers under the supervision of the State Commission, and more than 537 thousand MAZ-537 and -16A vehicles as part of in-plant testing.

In the summer of 1960, the factory SKB-1 received an unprecedented influx of fresh personnel: almost the entire graduation of the autotractor faculty of the Belarusian Polytechnic Institute joined the ranks of engineers. It is these yesterday’s students who for many years formed the engineering backbone of the special production personnel of the Minsk Automobile Plant.

The result of the above work was not just the fulfillment of an order of the Ministry of Defense, but the production of superplanned vehicles - instead of 116, 153 tractors were sent to the army. 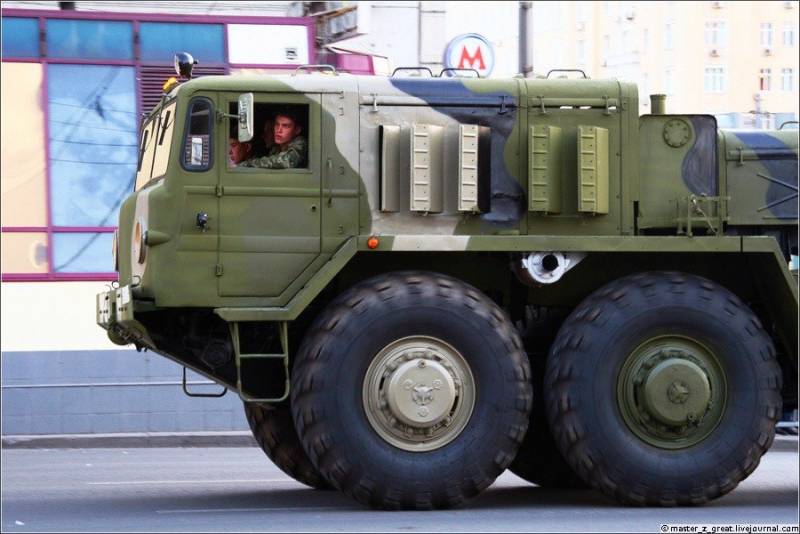 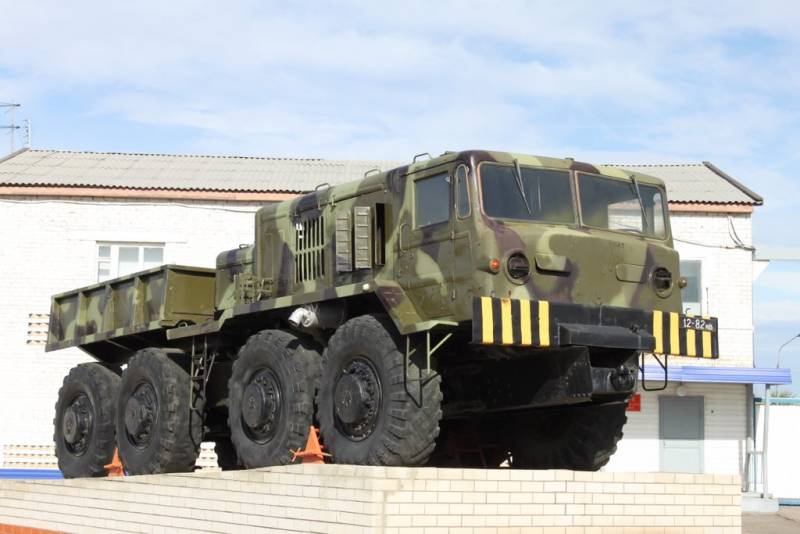 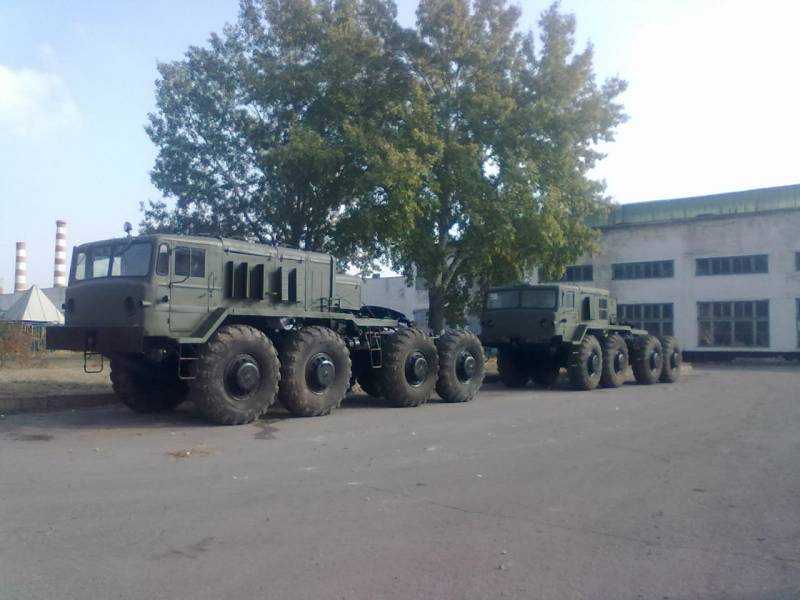 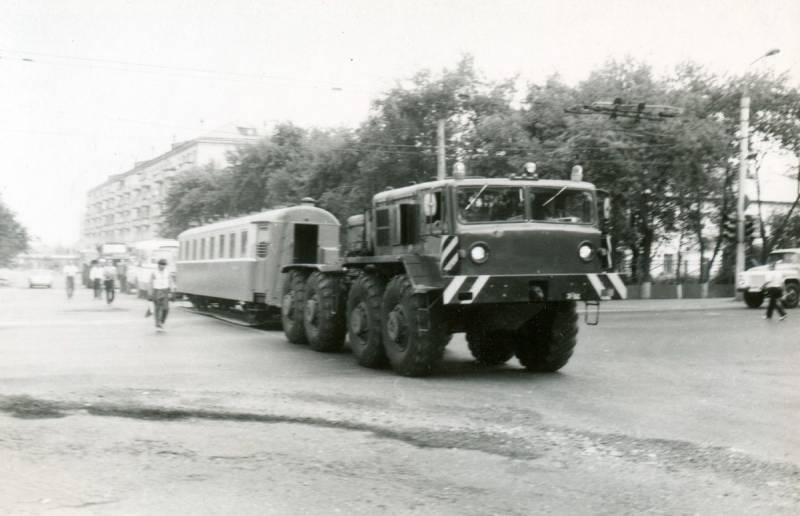 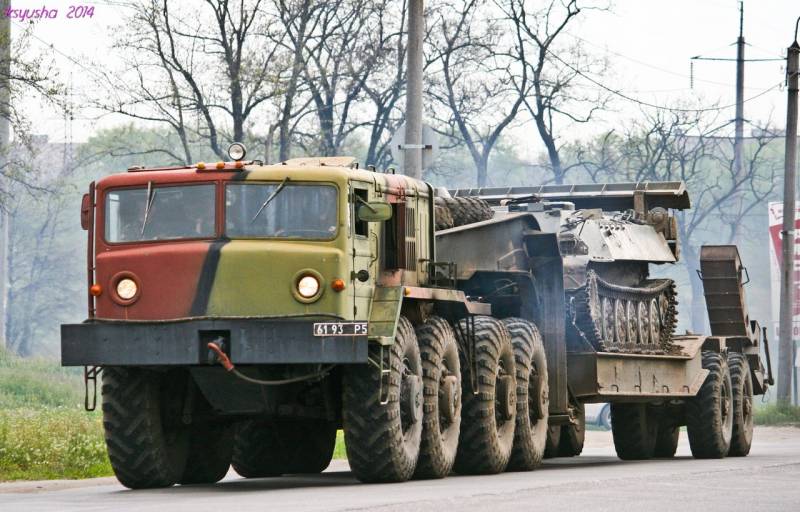 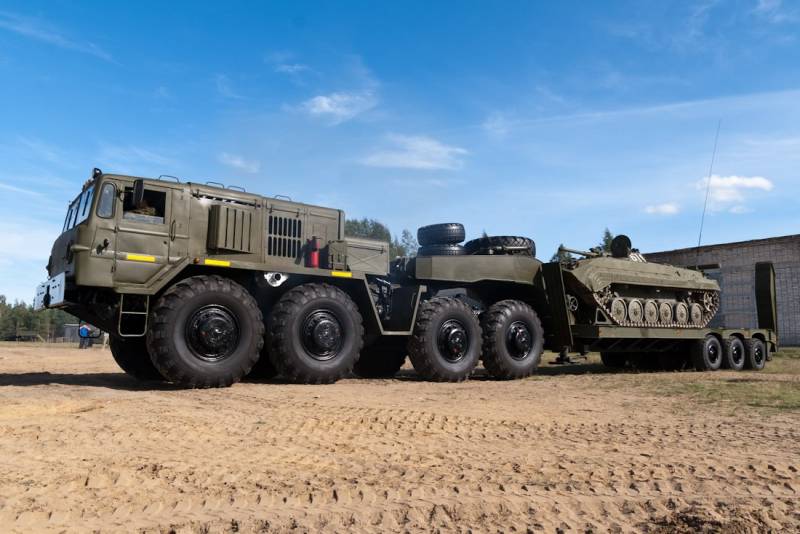 Moments of the busy life of the MAZ-535/537 family. Source: vk.ru
1961 was a turning point for the special production of MAZ. Firstly, work began on the 543rd machine, which became the main family of missile carriers, and secondly, on February 9, the USSR government adopted a decree on the transfer of production of MAZ-535/537 tractors to the Uralselmash Kurgan. Once again, Minskers gave the car to a third-party manufacturer, freeing up resources for the new model. Finally, the crown of all the hard work was the adoption of the MAZ-535/537 family of tractors by the Soviet Army. This happened on July 16, 1962, when more than 200 vehicles were delivered to the troops. After that, the Minsk heroes joined the army in a wide series - in 1963 an order was issued immediately for 360 tractors. The plant was supposed to produce at least one four-axis giant per day! In addition, the military after trial operation returned the tractors to the plant for modernization and refinement. So, in 1963 almost 150 cars were returned, of which only 7 were brought into proper condition. As a result, a plant was born in the city of Borisov, which was exclusively engaged in finalizing strategic tractors and tank trucks under the strict guidance of Minsk residents.

Tractors from Kurgan, engineers from Voronezh

The transfer of heavy MAZ production from Minsk to Kurgan, which began in 1961, ended in 1964, when the first cars left the gates of the wheel tractor plant named after D.M. Karbyshev. It was a MAZ-537 tractor unit and a 15-ton ballast tractor 537A, equipped with an additional hydraulic pushing bar. In this design, the machine could fulfill the functions of a pusher tractor, supplementing with its thrust the main pulling tractor. It is noteworthy that the first time, until major changes were made, all the equipment produced on the KZKT was called the old-fashioned MAZ. The new factory also produced equipment used in civilian life. Naturally, these were truck tractors that transported a wide range of heavy construction equipment on semi-trailers. Since 1970, a small series for the oil and gas pipelines under construction has been producing the MAZ-537P machine with an installed power take-off gearbox and TT-2 dissolution trailer, which was used as part of the PV-481 pipe carrier. However, such MAZs were not widely used in civilian life. Firstly, the resource of the tank engine did not exceed 1500 hours, and secondly, the consumption of diesel fuel and oil was very large, and thirdly, for the maintenance of such equipment highly qualified repairmen and an extensive technical base were required. 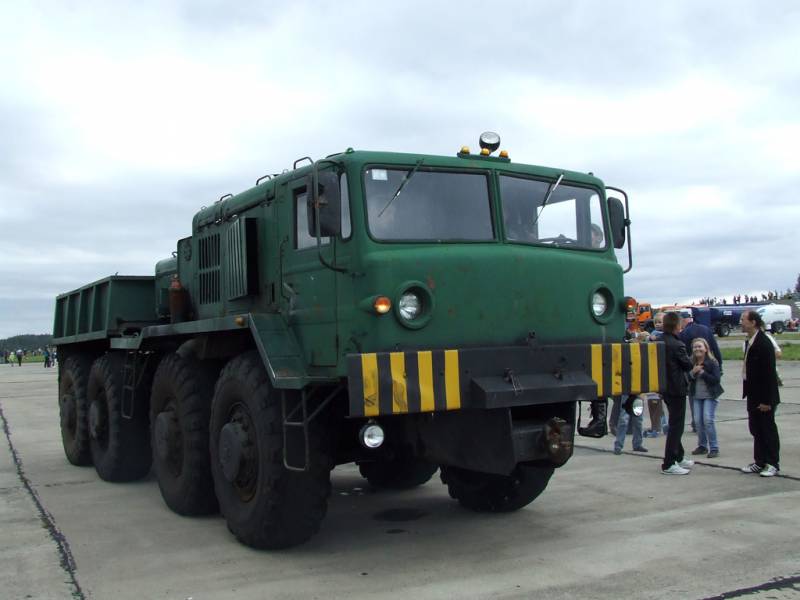 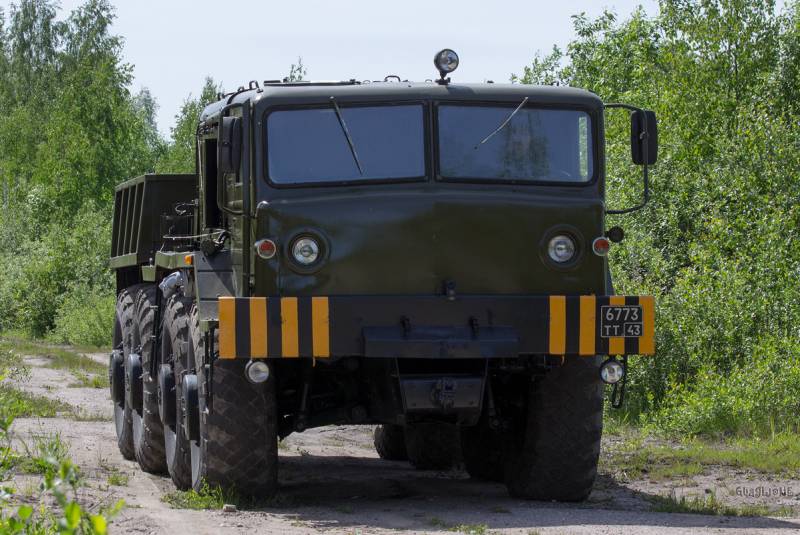 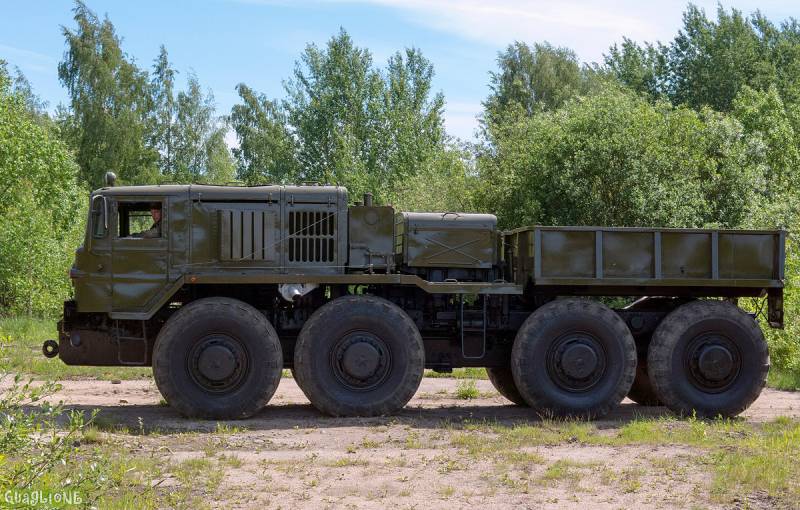 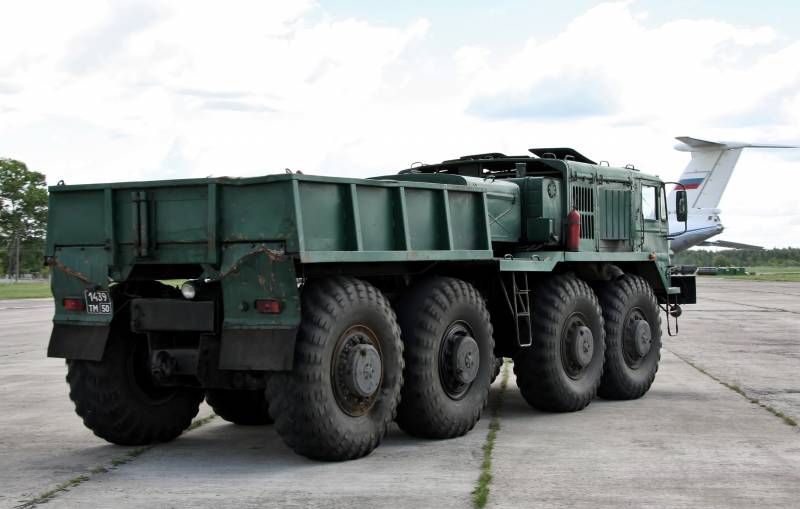 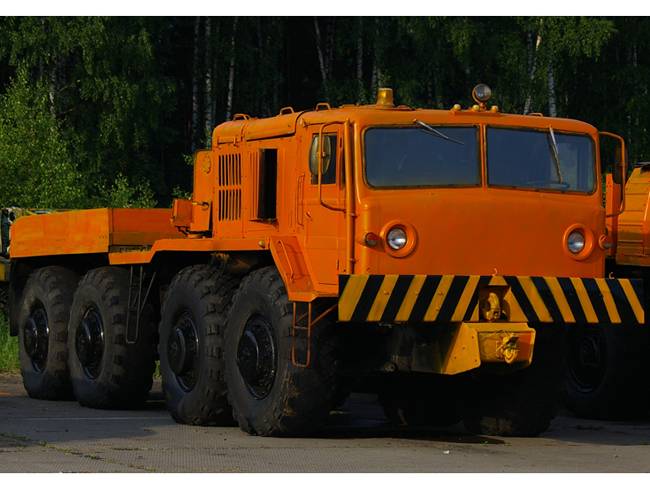 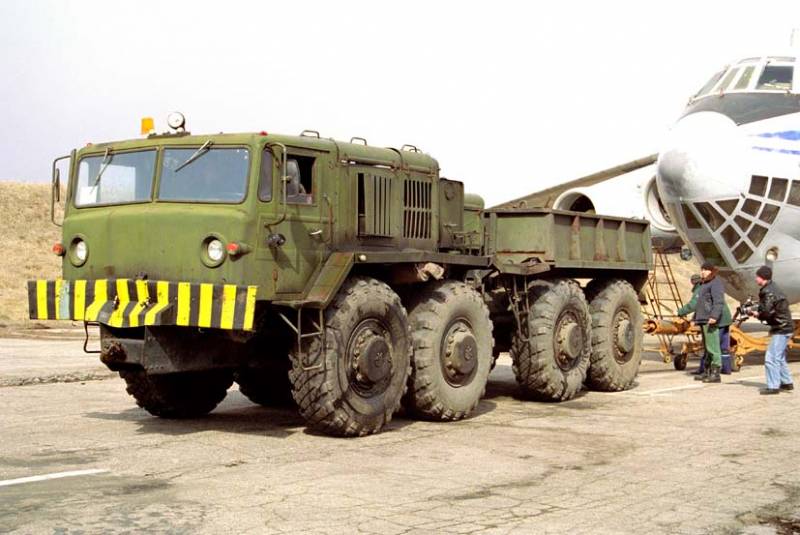 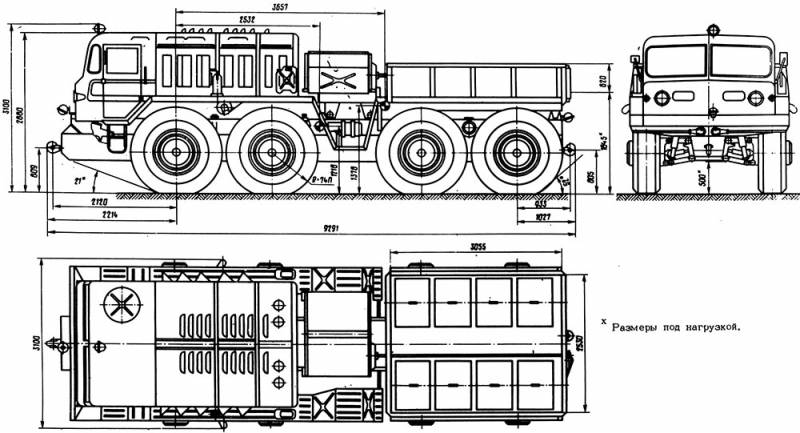 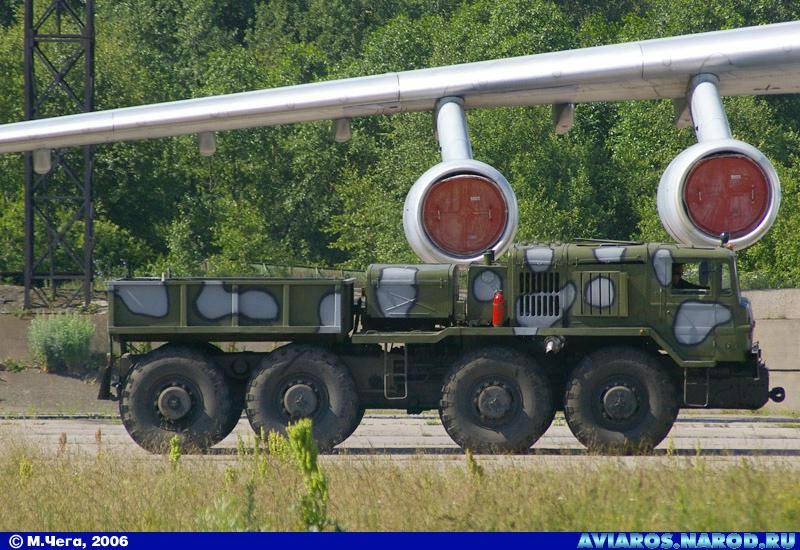 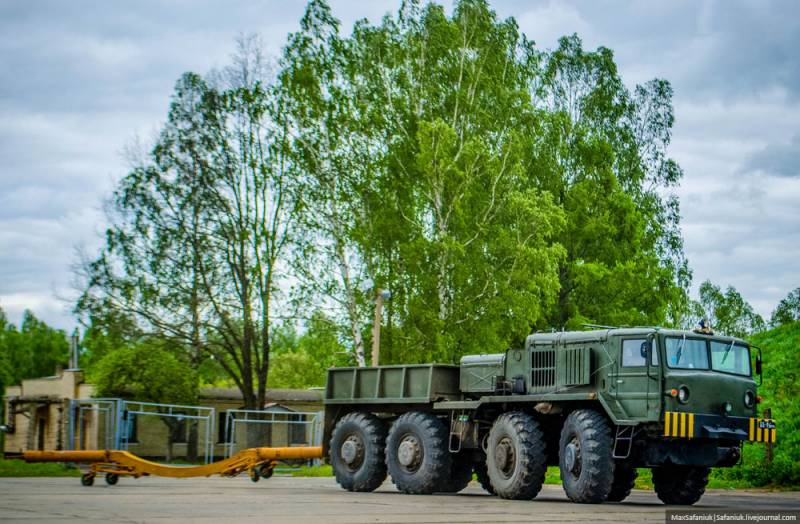 KZKT-537L. Source: trucksplanet.com
The first-born of its own Kurgan development, which received the name KZKT, was a 15-ton 537-ton ballast tractor. It appeared in 1976 and was formally intended for service at airfields, where the tractor was supposed to tow 200-ton transport aircraft. On the KZKT-537L platform, 16 tons of ballast were located, the front and rear overhangs were lengthened, and the exhaust system was modernized so as not to block the working space around the hitch. Based on the L model, an experimental KZKT-537M truck tractor was developed, in which the D-12A motor was replaced for the first time with a YaMZ-240NM with a capacity of 500 liters. from. It was already a car engine (and not a variation of the tank V-2) with the corresponding resource. At the very end of the 70s, this 12-cylinder V-shaped engine was still installed on serial 537L cars. 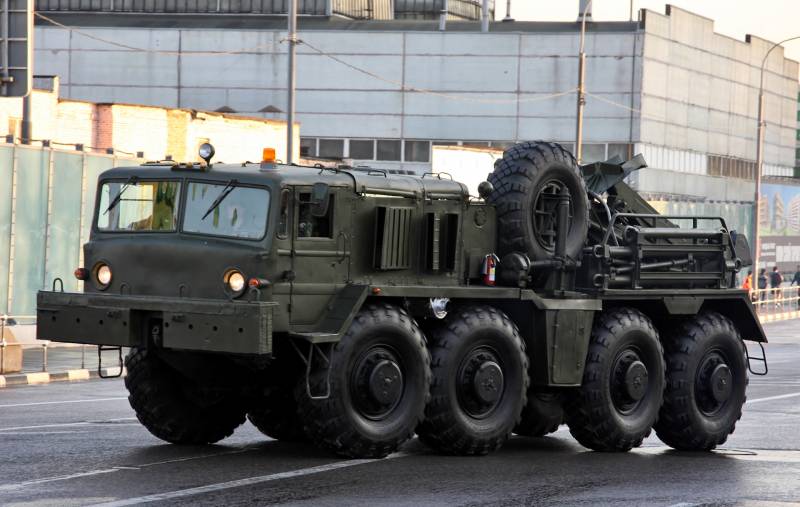 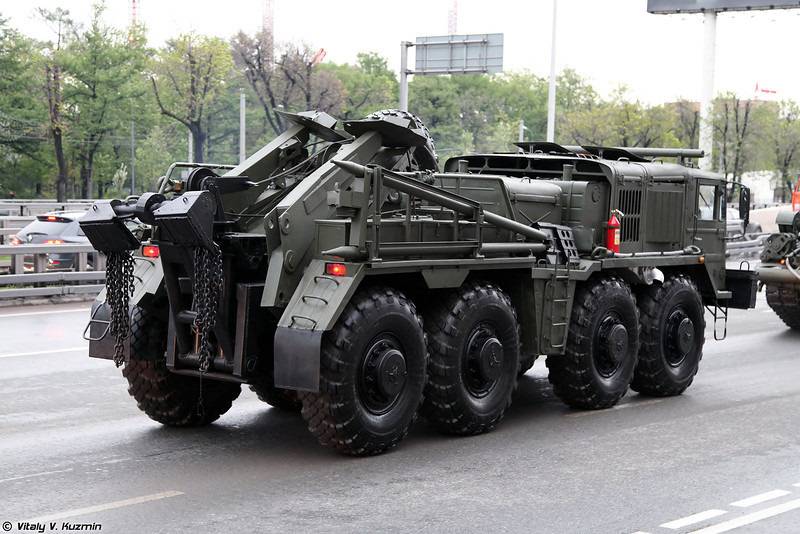 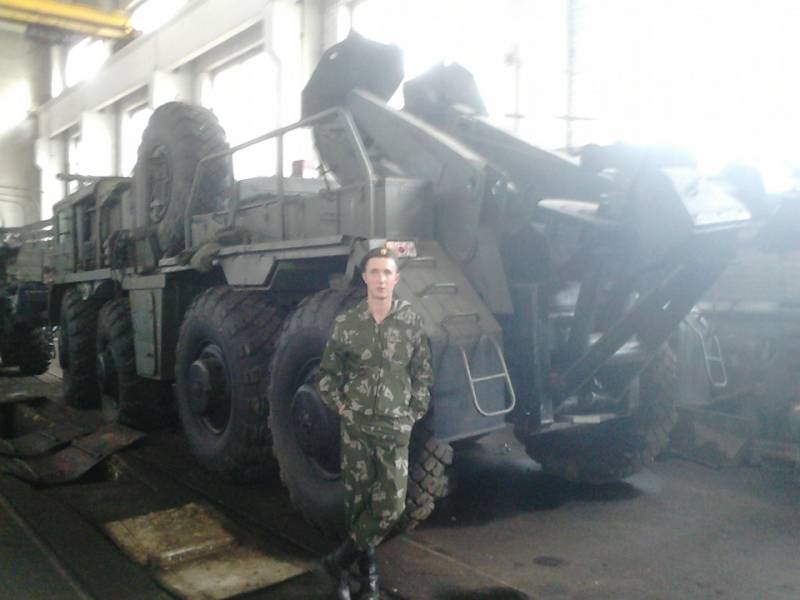 KET-T. Source: drive2.ru
In addition to the modifications that were discussed in the previous article, a version of the KET-T evacuation conveyor also appeared in production. True, it was produced at the Voronezh Central Automobile Repair Plant No. 172, and was developed at 21 research institutes in the mid-80s. But the wheeled chassis was Kurgan - MAZ-537G. The crew of the machine consists of three people: the commander, the driver and the rigger, who is responsible for docking the damaged equipment and layout of the rigging equipment. In addition to the fact that KET-T can evacuate equipment by semi-loading and on a rigid hitch, it is able to pull out stuck cars with a lifting-block device. Rigging equipment includes a two-roller unit, which allows you to get the force to pull out stuck machines up to 46 tf. If this is not enough, then the block chain, depending on the configuration, makes it possible to pull equipment from the mud captivity with a force of up to 80 tf! The main “target audience” of the KET-T rescuer was KrAZ, special BAZ chassis and MAZ wheeled chassis. Additional bonuses for the tow truck were equipment for gas-flame cutting of metal, as well as a boom crane, designed for one and a half tons of cargo. Finally, in extreme cases, the crew could conduct reconnaissance of chemical and radioactive contamination of the area and even carry out blasting operations. For this, the evacuation tractor has a demolition kit No. 77. 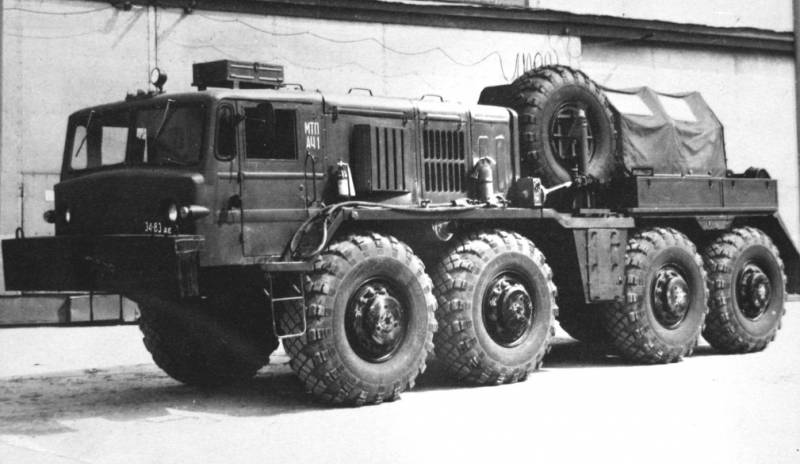 MTP-A4.1. Source: Evgeny Kochnev, "Secret Cars of the Red Army"
Another engineering equipment based on MAZ-537G manufactured in Voronezh was MTP-A4.1, or a technical assistance vehicle. The main objective of the wheeled giant, developed in 1984 at 21 research institutes, was the technical assistance of heavy wheeled vehicles and a special chassis. A distinctive feature of this rare engineering machine was a small awning with glazing. In addition to the fact that MTP-A4.1 could tow equipment weighing up to 45 tons on a rigid hitch or in a semi-submersible state, the three crew members had at their disposal a supply of oils, special liquids, fuel and spare parts.

Subsequently, all engineering equipment and tractors of the Kurgan plant were transferred to the new KZKT-7428 base, which is a deep modernization of the MAZ-535/537 series. This happened in the early 90s and was already connected with the Russian Army. 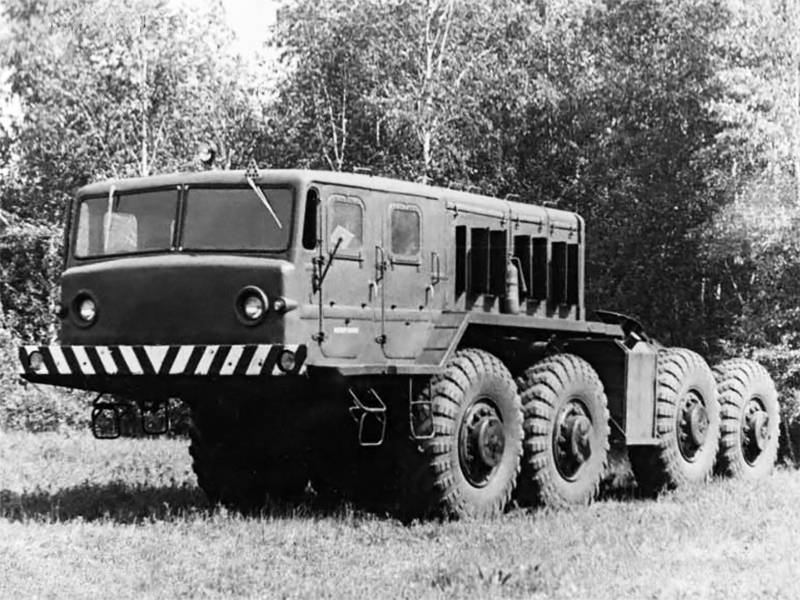 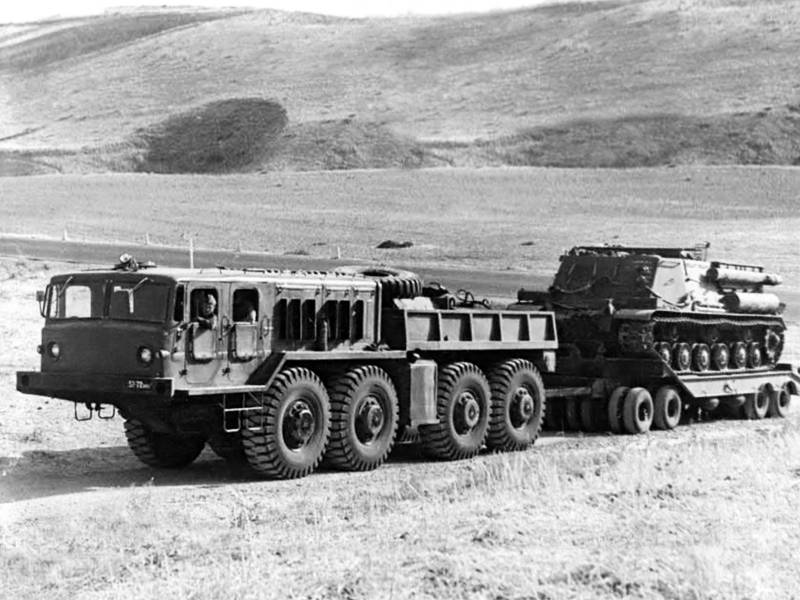 Options for MAZ (KZKT) -545A. Source: kolesa.ru
History numerous versions and variations on the theme of MAZ-535/537 can be continued for a long time, but the format of this material does not allow to embrace the immense. However, one can not lose sight of one iconic car - MAZ-545, developed in 1969.

There is still no final answer to the question of who was the head developer of the machine: Minsk SKB-1 or Kurgan KZKT? Different sources cite conflicting data. Be that as it may, speed, power and capacity - this is how the main parameters of modernization of the classic heavy MAZ can be characterized. We delivered a new turbocharged V-38 diesel engine with a capacity of 650 liters. sec., which increased the average speed of the transfer of armored vehicles on highways. Previously, tank crews stubbornly carried marching throws in their regular places, but now the second row of seats appeared on the tractor for tankers - the cabin was doubled. An important novelty was the 4-speed manual gearbox with electro-hydraulic engagement of friction disc clutches, providing a wider range of torque and eliminating the transfer case. In addition to the truck tractor, a MAZ-545A ballast tractor was built, which was largely similar in parameters to its predecessor.

The 545th tractor from Kurgan did not go into series. Largely because of the Oplot series of tractors being developed simultaneously in Minsk. But the developments in technology were subsequently effectively applied on KZKT-7426 and 7427 vehicles.

Author:
Evgeny Fedorov
Articles from this series:
MAZ-535: heavy child of the Cold War
The development of power: MAZ-535 is gaining strength

We are in Yandex Zen
The development of power: MAZ-535 is gaining strength
Multi-axle rocket carriers
20 comments
Information
Dear reader, to leave comments on the publication, you must to register.