According to the results of the thirties. The state of the armored fleet of the Red Army before the war

В stories The Red Army the thirties remained a period of active construction and development in all areas. Particular attention during this period was given to the creation of mechanized / armored forces. All the measures taken allowed by the end of the decade to create a massive and well-equipped military branch, which will be crucial in a future war. However, not everything went smoothly, and by the summer of 1941, far from all the problems were managed.

The beginning of the construction of the armored forces of the Red Army can be considered 1928, when mass production of the MS-1 / T-18 tanks began. The finished equipment was handed over to the mechanized forces, where it was brought into one regiment. Already in 1930-32. new units and formations appeared, and hundreds of tanks counted.

In the same period, the serial construction of new types of armored vehicles began, including own Soviet development. In parallel, the design of samples was carried out for the future. Industry mastered the directions of light, medium and heavy tanks, continued the development of armored vehicles and was looking for new solutions. A true evolution of structures was observed, in which several generations of technology replaced each other in a matter of years. 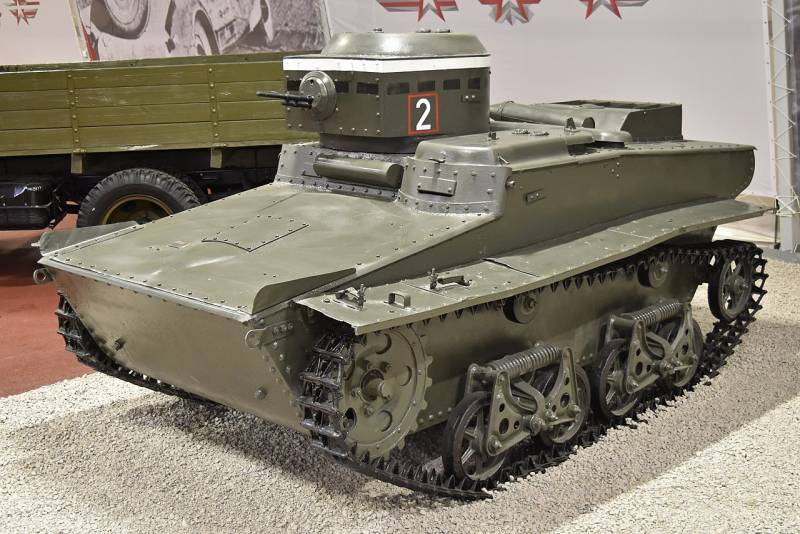 T-37A amphibious tank in the museum
Actively resolved issues of organizational structure. So, according to the experience of recent conflicts, mechanized divisions, brigades and corps were created and reorganized. Recent changes of this kind have already taken place in 1941, after the outbreak of World War II.

Perhaps the main focus in the thirties was the development of light tanks for various purposes. Over time, their value to the troops declined, but by 1941 the Red Army still had a significant amount of such equipment. Moreover, not all light tanks and wedges were ready for combat use.

According to well-known data, by the beginning of the summer of 1941 in the Red Army there were more than 2,5 thousand T-27 tankettes, with more than 1400 units. were under repair or needed it. Another mass vehicle was the T-37A amphibious tank - approx. 2300 units, less than 1500 combat ready. There were fewer floating T-38s - 1130 units, of which approx. 400 under repair or pending.

By the beginning of the war, amphibious tanks and wedges were used only in supporting roles. A significant part of such equipment could not be operated due to breakdowns, while others managed to develop a large part of the resource. In addition, combat capabilities no longer met the requirements of the time. 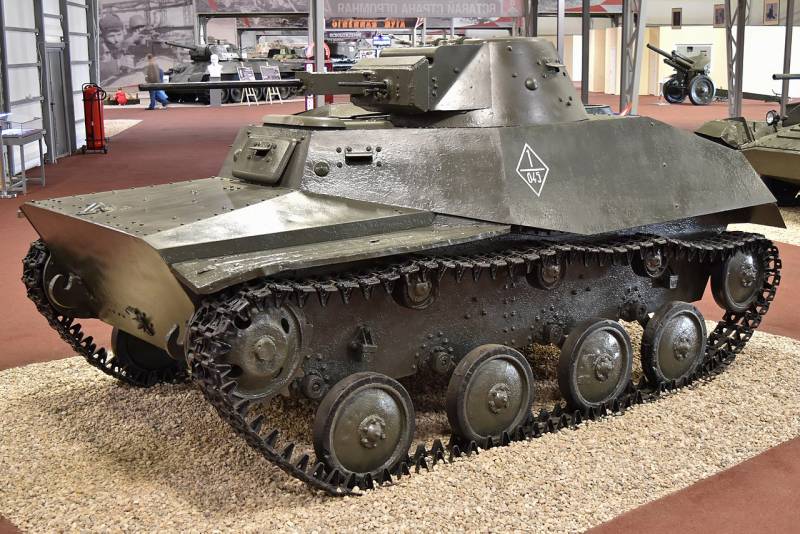 Pre-war light tank T-40
The basis of the fleet of light tanks was made up of more efficient T-26 family vehicles, the production of which was completed only at the end of 1940. By the beginning of the war, more than 10 thousand such tanks were in the Red Army. 1260 tanks were double-turret, recognized morally obsolete. 1360 cars were subject to repair. It should be noted the presence of more than 1100 chemical and 55 remote-controlled tanks based on the T-26, as well as 16 combat-ready self-propelled guns SU-5.

A significant share of the fleet of armored vehicles was BT light tanks. By the summer of 1941, the Red Army had more than 7,5 thousand BT tanks of five modifications. The most massive (over 4,4 thousand) were the relatively new BT-7; continued release of their improved modifications. Less than 1400 Fleet Tanks underwent repairs or were waiting for him. It should be borne in mind that by the beginning of the fortieth BT early modifications began to be displayed in training units.

Literally on the eve of the war, a light floating T-40 tank went into production. By the beginning of summer, the industry had delivered 132 such machines. A few weeks in June, before the start of the war, they delivered another approx. 30 units Of the existing fleet at that time, only one tank was in need of repair.

The first domestic medium tank in the series was the T-28, which was produced from 1933. Until 1940, a little more than 500 vehicles were assembled. Part of the equipment was written off based on the results of the fighting; other damaged cars were being repaired. Modernization was also carried out. By June 1, 1941, the Red Army had 481 tanks of this type, of which 189 were not ready for use. In the short term, the army planned to abandon the T-28 due to the final obsolescence. 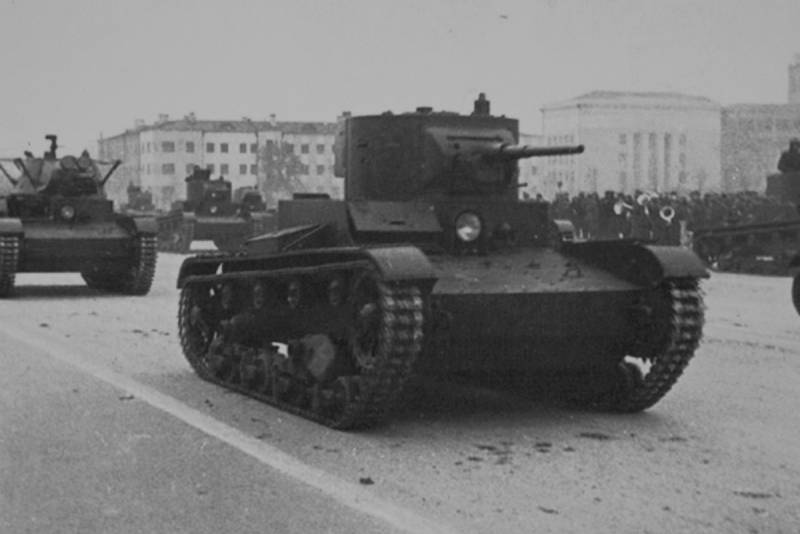 Light tank T-26 in a single-turret configuration - the most popular model in the Red Army
The class of medium tanks includes the most successful armored car of the Great Patriotic War - T-34. The production of such equipment began in 1940 at two plants. By the beginning of 1941, only 115 tanks had been assembled, but then the pace of production increased. For the first half of 1941, 1100 tanks were manufactured. By June 22, the Red Army managed to get 1066 units. In the near future, new deliveries took place.

In 1933, the first Russian heavy tank, the T-35, entered service with the Red Army. The production of such armored vehicles continued until 1939, but did not differ at a high pace. The annual maximum was 15 tanks (1936), while in other periods they produced no more than a dozen. In total, the army received 59 serial T-35s. By June 1941, there were 55 heavy tanks in the units, of which 11 were under repair.

To replace the T-35, several projects were developed, and the new KV-1 heavy tank reached the series. The production of such equipment began in February 1940, and already in April the army took the first cars. By the end of the year, 139 units were built. KV-1. By the beginning of the summer of 1941, two plants were built in Leningrad and Chelyabinsk by approx. 380 tanks; the bulk of the equipment managed to enter the troops.

Simultaneously with the base KV-1, the KV-2 with other weapons went into the series. In 1940, the LKZ built 104 such heavy tanks. In the first half of 1941, another 100 cars were handed over, after which their production ceased. The last batches were handed over to the customer after the outbreak of war. 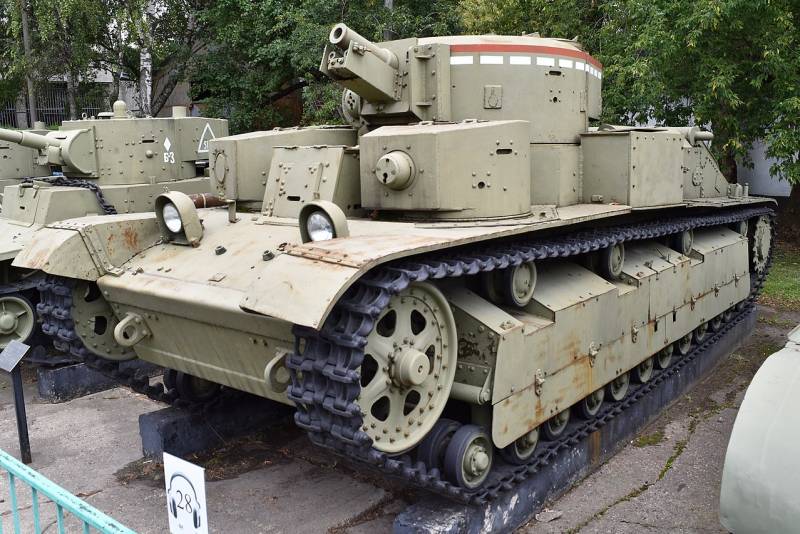 The most important component of the armored forces were armored vehicles of various types. So, by the beginning of June 1941, the Red Army had almost 1900 light armored cars. Basically, they were BA-20 - more than 1400 units, including 969 equipped with radio equipment. Other light armored cars of several models were built in smaller series.

The oldest of the medium armored cars was the BA-27. At the beginning of the war in the Red Army there were 183 such vehicles, most of which worked out almost the entire resource. 65 armored cars were sky-ready. Newer average BA-3s were available in the amount of 149 units, 133 were ready for operation and combat use. In the years 1935-38. improved armored cars BA-6 were produced. In June 1941, there were 240 such vehicles, including 55 radians. In combat readiness was more than 200 units.

The most massive medium armored car was the BA-10 and its modification of the BA-10M. In total, they produced more than 3,3 thousand of these machines, of which almost 3 thousand before the start of the war - until June 22, the customer was transferred to approx. 2,7 thousand units In good condition were 2475 units. - 1141 radium and 1334 linear armored cars. 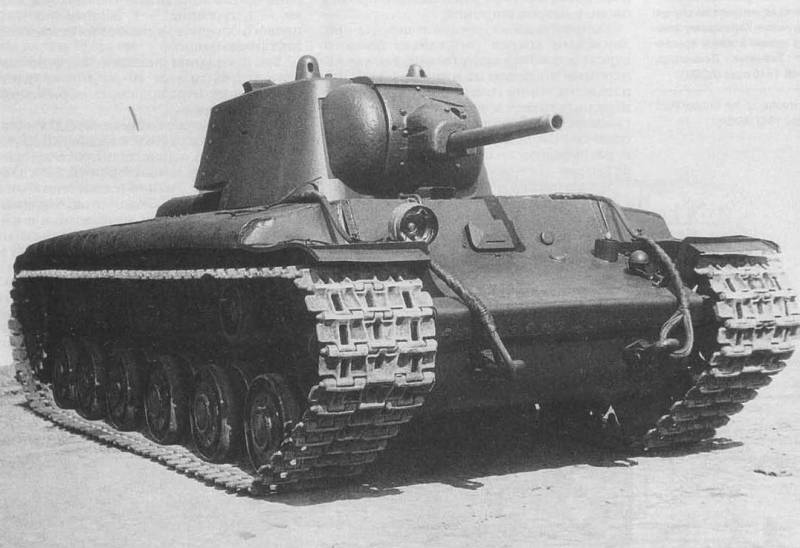 KV-1 heavy tank of the installation party of 1940
Also, the Red Army had other types of armored vehicles, less numerous. For example, in 1940-41. managed to build a total of 16 heavy armored cars BA-11. The last two cars were handed over after the start of World War II.

As of the beginning of the summer of 1941, the armored troops of the Red Army in terms of the number of military vehicles were one of the largest forces in the world. However, they had a lot of significant problems and difficulties of various kinds. Some of them were managed to the best of their ability, while others turned out to be overly complex for a quick solution.

First of all, the specific distribution of armored vehicles in classes is noticeable; also noteworthy is the proportion of cars of different years of manufacture. Even in the pre-war period, the T-26, T-28 and T-35 tanks, the early modifications of the BT, and also some armored cars were called obsolete. However, all this equipment still made up a significant share of the total fleet. This was especially pronounced with the T-26 tanks - the most massive at that time.

Not all available cars were combat ready. A noticeable percentage of equipment, different depending on models and modifications, was under repair or expected it. In addition, the armored vehicles of the old models managed to work out most of the resource, which reduced the potential of the combat-ready fleet. 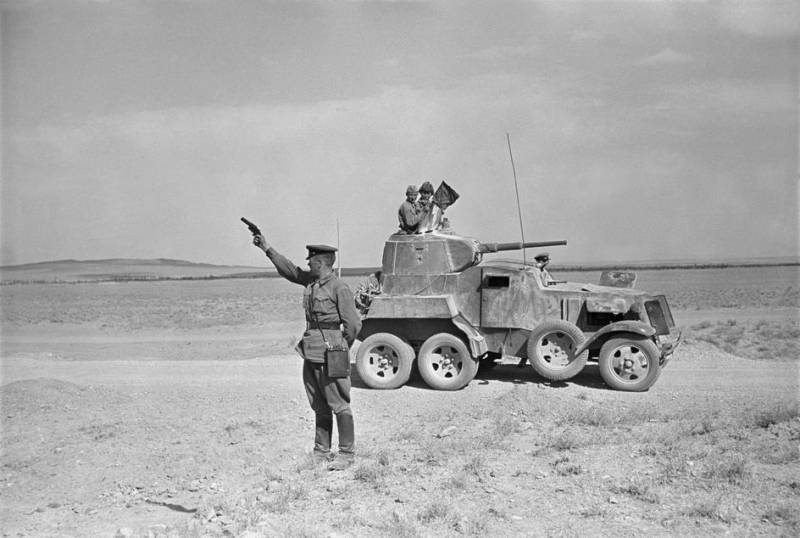 Armored car BA-10 and its crew
It should be borne in mind that tank units were deployed throughout the country and covered a number of strategic directions. The concentration of all troops in one direction was not possible for organizational and military-political reasons.

In general, by the summer of 1941, units of the Red Army had about 25-27 thousand tanks of all classes. Several thousand cars were not ready for technical reasons. The main contribution to the future victory was made by the tanks of new models - T-34 and KV. However, by the beginning of the war there was only approx. 1500 of these armored vehicles. They accounted for only 7% of the combat-ready tank fleet. However, production continued, and the share of modern technology was constantly growing.

In the thirties, Soviet tank building went a long way. It began with a copy of foreign equipment and its release in a small series, and then mastered the development of its own designs and the mass assembly of thousands of tanks. Thanks to this, in just a decade, the few and limitedly developed mechanized troops of the Red Army turned into large and powerful armored troops.

The development of armored vehicles was conducted not only in our country, but also among a probable enemy. New challenges and requirements arose, due to which the existing equipment quickly became obsolete. The USSR tried to respond to such circumstances to the best of its ability. However, the possibilities were not unlimited, and by the beginning of the war the state of the armored fleet was far from ideal. However, without previous years of hard work, everything would have been much worse.