Tsei. The triumph of the Caucasian "Amazons" 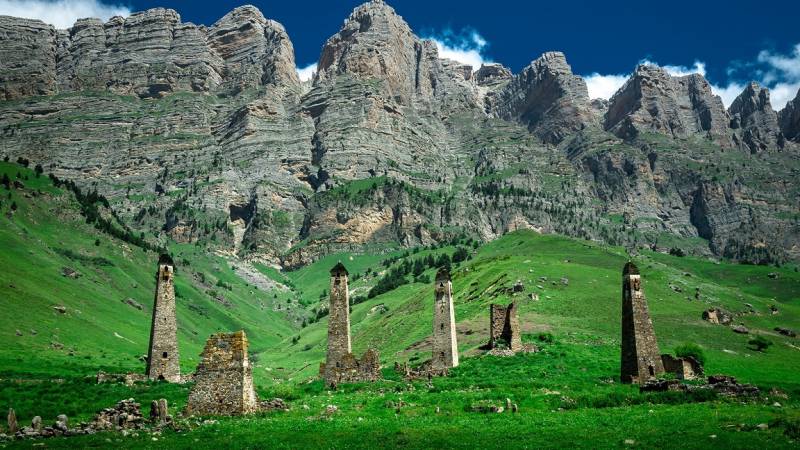 The Caucasus, which never lived without small or large military conflicts, naturally overgrown with relevant traditions, customs, and even holidays, not to mention the characteristic architecture of battle towers and the cult of the cold weapons. Of course, forced belligerence was reflected in our beautiful female halves. While the men were on a campaign or a banal paramilitary raiding raid, the women remained alone and became easy prey, for example, for a neighboring village, with which hostility could go on for decades.

Contrary to the prevailing stereotype of a mountain woman who is packed from head to toe in impenetrable fabric and only makes cakes bake, the female role in the Caucasus was extremely ambiguous. There were women warriors, and women who ruled entire khanates, determining the future of their people for centuries to come, and even entire matriarchal villages.

Of interest is the fact that many ancient authors settled the Amazons on the Caucasian coast of the Black Sea. Myths are myths, but Herodotus, for example, indicated that among Scythian-Sarmatian tribes, a woman participated both in public life and in the military operations of the tribe. Moreover, a well-known Greek historian noted that Scythian and Sarmatian women "go hunting with their husbands and without them, go to war and wear the same clothes as men." It was also believed that no girl would marry until she killed the enemy. Verily, the keeper of the hearth.

However, you can not go so deep into the antiquity of this region to find warlike "Amazons." In Armenia, at the end of the 19th century, a powerful national liberation movement of the Fidea (fidain, which is translated from Arabic as “sacrificers”) appeared, opposing the Armenian Genocide by the Ottoman Empire. There were many women in the Fidea who very skillfully controlled small arms. Oddly enough, but this “practice” survived the 20th century, therefore, during the years of the terrible Karabakh war, women were also present in the ranks of the Armenian military formations. 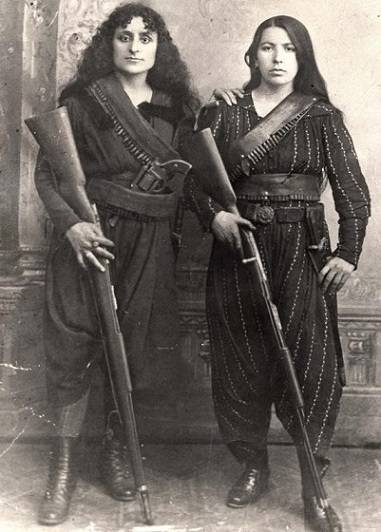 Armenian Fidai women
The militancy of women in some regions and even individual villages, which took shape over centuries of bloody winds of civil strife, is emphasized in folklore. So, in Ruguja, the Dagestan village, which is famous for its warlike and wayward women, a funny proverb goes: “Hey wife, there is a fight, why are you sitting at home?”

One of the most unique once traditional holidays that exist in the Caucasus, and more precisely, in Ingushetia, and which provide fertile soil for legends about the Amazons and assumptions about the widespread spread of matriarchy, is Tsei (also called as Sesarii Tsei). Still some authors call this holiday the day of the Amazons. Tsey was intended solely and exclusively for women, men were not allowed to triumph in any case.

They were preparing for the holiday almost the whole year, preparing secretly. It concerned not graceful clothes or gastronomic delights, although this was present, but skills from a completely different field. Girls who wanted to participate in Tsey learned to shoot from a bow, confidently stay in the saddle and even master hand-to-hand fighting skills. Often the girls were secretly taught military affairs by their brothers, including dzhigitovke. These trainings were held secretly, and they were required because the holiday was far from well-known on March 8th. The most far-sighted relatives were well aware that, despite a certain secretness of the holiday, the rumor about how this or that participant showed herself would quickly fly around the district. And, therefore, the neighbors will draw far-reaching conclusions about the whole family and most of all about the girl’s brothers: if they could not teach her, then the warriors themselves are bad. It was not only humiliating, but also dangerous. 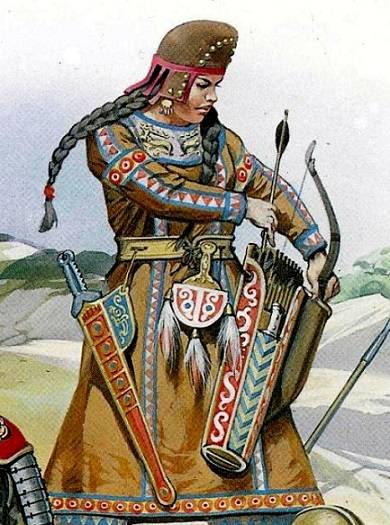 Archer from Scythian-Sarmatian tribes
At the festival, the girls had to show themselves in the best possible light. They had to cook perfectly and behave competently, be neatly dressed and confidently hold onions, reins and knives in their hands. But all this is somewhat vague. What did the holiday really look like?

Tsey: fights and a lot of beer

Cei was celebrated annually in the second half of September. Around the holiday, there is a dispute between historians and ethnographers, who either consider it an echo of matriarchal communities, or attribute it to the traditions of the Amazon tribe, no matter who lurks under it. On this day, from early morning, women were vested with exclusive rights. In the morning they could openly contradict and bake her husband for their pleasure, even in the presence of strangers. The husband had to listen to everything that had accumulated at the missus for the whole year, but that was not the essence of the holiday. 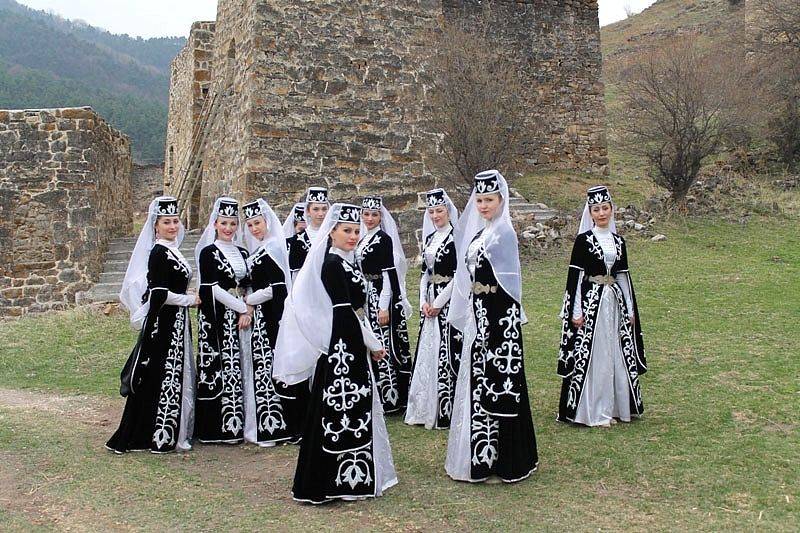 The celebration itself took place far from men's eyes in mountain meadows or distant glades, so soon a whole string of women of very different, including very old age, pulled away from the villages. Elegantly dressed, they carried knots and knapsacks in their hands, someone led the seated horses, and some even rode astride, not paying attention to the mocking looks of men.

By noon, all the participants were assembled. The holiday began with the fact that the assembled women elected the queen. She became a strong business lady with an impeccable reputation. Often she became the wife of an elder, leader or ruler of the village. After that, the “queen” already personally chose her retinue, divided into close advisers and guards. Counselors are omniscient girlfriends or young ladies who have proved sharpness of mind in ordinary life, guards are clever strong women who can resist even some men.

The celebration continued with songs and round dances and, of course, with a plentiful feast. In order to demonstrate their culinary skills, women on the impromptu tables in the middle of the meadows surrounded by picturesque mountains set the most exquisite dishes and drinks. The young ladies drank all day ... beer, which in those days, and even now, for example, among Ossetians, was a ritual drink. But no one got drunk, because the behavior of each was closely monitored by the girlfriend and the “queen” herself.

But the holiday was not limited to this. Without fail, during the Tsei, a kind of Olympics was held, which was more like a review of the troops. Young girls competed in archery and horseback riding. Our halves converged in fierce hand-to-hand fights. The tsarina and everyone gathered closely watched the course of the struggle and the results. 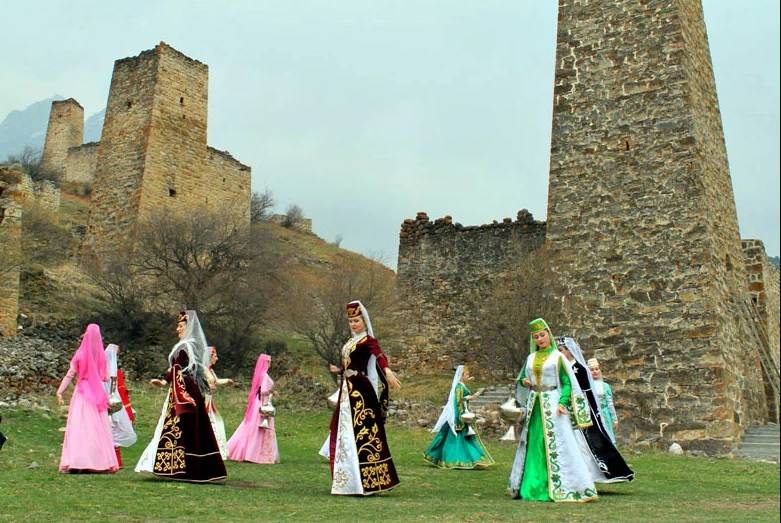 This amazing holiday did not find much reflection in the literature, for the most part everything was transmitted orally. However, Idris Bazorkin has an extremely flowery description of him. Bazorkin was a Soviet writer of Ingush descent. His ancestors served the Russian Empire as career officers, and his grandfather, Bunuho Fedorovich Bazorkin, was one of the first Ingush major generals in Russia. Idris was actively interested in ethnography, because he received a diverse education (gymnasium, madrasah, technical school and the North Caucasus Pedagogical Institute), and in 1968 his novel “Out of the Darkness of Centuries” was published, in which many mountain phenomena were reflected life, including the holiday Tsey: 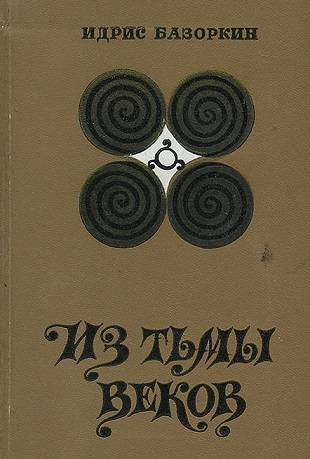 - Put on the earth the fruits of the earth that you have obtained and brought here! - ordered the king.

- To the dregs! - shouted Aiza and, having drained her horn, threw him away.

Women followed her orders. The feast began. From all sides there were jokes, laughter, cheerful conversation. Now everyone knew that Aizu had learned these words from her grandmother. And she spent holidays more than once. Aise was sitting on a pile of clothes that the girls put under her, and towered above everyone. She remained without a scarf, and this emphasized her unusualness. She was wearing a black dress up to the toes, a golden scarf on her shoulders under the braids.

Girls and young women rushed to the nearest hill with a noise. After some time, a detachment of thirty “young men” in combat armor left from there ...

Djigitovka began to music. "Boys" showed their ability to wield a horse. Then there were races, and the winners were awarded prizes. To whom a glass of beer, who damn it, who received a piece of halva. The last game the king announced a great leap ... "

Unbeknownst to others, this triumph of female "independence" solved several important problems. Firstly, it was a kind of bridegroom for future brides. Senior matrons could appreciate the young girls in the matter, and marriage in the Caucasus was an unusually important affair. He could suppress the enmity of childbirth, unite the family in a more viable community, etc.

Secondly, given the traditionally sharply hostile environment and the risk of being left without men during the war or campaigns, women could evaluate their strength during the celebration, prepare and develop a specific team structure and team spirit itself. And if such a "detachment" could not cope with the enemy’s military party, then it could give a worthy rebuff to a gang of armed abreks. And such cases have taken place. Female defensive detachments in small skirmishes sometimes even captured prisoners, on whose heads, of course, eternal shame fell.

Thirdly, the structure of social relations established at the festival was secretly present in the village all year. The “Queen” maintained universal respect, settled quarrels, gave advice and monitored the hostile environment, preparing for possible disaster. 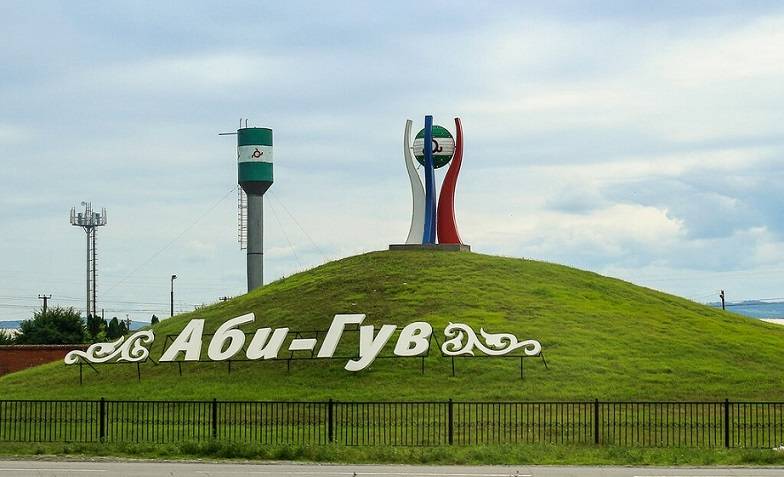 Abi-Guv was actually the last refuge of the Tsei festival. Photo: itonga.lj.com
Tsei began to lose ground from the beginning of the expansion of Islam with its laws and traditions. By the middle of the 19th century, Tsey was celebrated once every 5 years, and the revolution of the beginning of the 20th century completely erased this unique militarized female celebration. The first president of the Republic of Ingushetia, the hero of the Soviet Union and Lieutenant General Ruslan Aushev tried to revive the holiday. On September 16, 1998, at the Abi-Guv burial mound (the southeastern outskirts of Nazran, on the border of the Nasyr-Kort village on the P-217 road), skillful horsewomen, archers, folk songs performers and craftswomen from all over the republic gathered for Cei's celebration. The winner went to an expensive kurkhas (female headdress). After Tsey was noted several more times at the republican level and a couple of times on their own, but globalization, apparently, finally put an end to the ancient custom. Yes, and a little now there are girls who can equally confidently pull the bowstring and bake chapilgash - flat cakes of thin pastry with different fillings.

Ctrl Enter
Noticed a mistake Highlight text and press. Ctrl + Enter
We are
Chernobyl notebook. Part of 3Father told
14 comments
Information
Dear reader, to leave comments on the publication, you must to register.