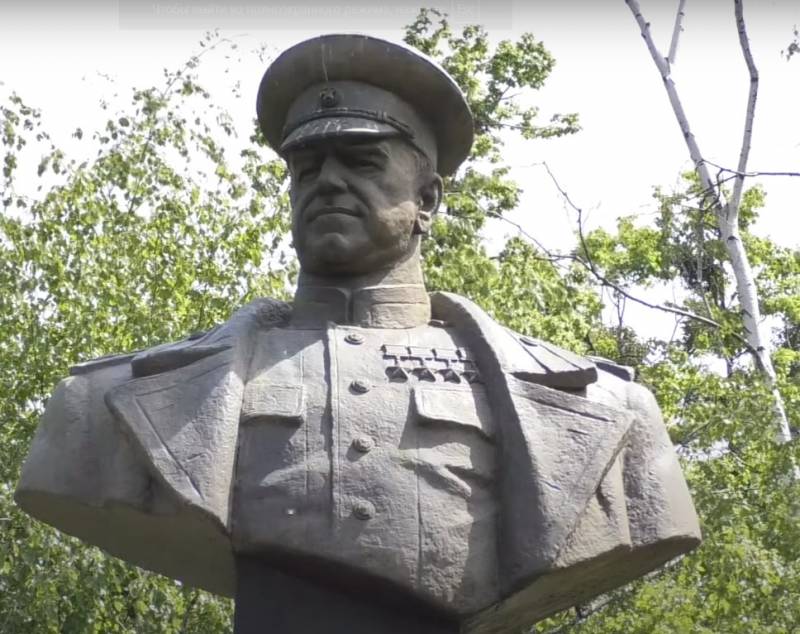 In Ukraine, the demolition of monuments to Soviet commanders continues. Apparently, the next in line will be the monuments to George Zhukov. Now Marshal Zhukov is diligently trying to denigrate the Ukrainian press, preparing public opinion for the likely declaration of the marshal as a criminal.


An article by Alexander Levchenko in the Ukrainian edition of the Observer is devoted to criticism of the most famous and revered Soviet Marshal of the Great Patriotic War. According to the author, George Zhukov was by no means a brilliant commander, as he was represented by Soviet propaganda. The Marshal, as the Ukrainian author assures, bears personal responsibility for the unpreparedness of the Red Army for war, since since January 1941 he held the post of chief of the General Staff of the Red Army.

The first thing that the Ukrainian publication accuses Zhukov of is the capture of a total of 4 million Soviet troops who were surrounded in the Kiev-Uman, Bryansk-Vyazemsky, Vitebsk-Mogilev-Gomel boilers, near Grodno, Minsk, Chernigov and Mariupol. Levchenko recalls that due to the actions of Zhukov, more than 1,5 million Ukrainians were captured in German. Allegedly, Zhukov “personally sent to death” the mobilized inhabitants of the Ukrainian SSR and ordered not to spare the soldiers of the four Ukrainian fronts.

Further more. Levchenko calls Ukraine’s loss of life the highest in World War II after China, voicing the figure of 9 million dead. In principle, given the geographical location of Ukraine and the fact that the Germans had already been stopped on the Volga, this is not surprising.

But Levchenko, firstly, considers Ukraine’s loss of life in isolation from the entire Soviet Union, although the Ukrainian SSR at that time was an integral part of the Soviet state, and secondly, it forgets that not all the victims were Ukrainians. For example, Ukrainian nationalists took the most important part in the extermination of the very large Jewish population of cities and towns of the Ukrainian SSR. The situation was exactly the same with the genocide of the Polish population in Western Ukraine.

Apparently, considering the arguments about Zhukov's guilt in the loss of life of the Red Army not convincing, the author at the end of the article goes on to yet another "facts" that supposedly should debunk the Soviet marshal. Levchenko writes that during searches at Zhukov’s apartment, when the commander fell into disgrace, furs, jewelry, expensive fabrics and paintings were found. All this, according to the author, was stolen in Germany, while the rest of the population of the Soviet Union was starving.

The last passage is generally very strange. What, according to Levchenko, could the Soviet population be fed with paintings brought from Germany? Or, wrapped in several fur coats brought by the Soviet military leader, would the whole country have been saved from hunger? Trophies at that time were carried by everyone - both generals and rank-and-file. But what does this have to do with the commander’s talent of George Zhukov, his merits or lack of merit?

Yes, Georgy Konstantinovich Zhukov, like any other military commander during the years of World War II, made mistakes. As a result of the mistakes, soldiers and officers died, but this is a war. Other generals, and all the countries participating in the Second World War, acted in exactly the same way. Yes, Zhukov was a difficult person in personal communication, many veterans of the Second World War loved much more the other famous marshal - Konstantin Konstantinovich Rokossovsky, who was intelligent and respected the personnel.

But the presence of errors, and rudeness or rigidity in personal communication, and, especially, some fur coats or dishes brought from Germany, do not give us the right to deny the huge contribution of Marshal Zhukov to the victory in the Great Patriotic War.

As for the Ukrainian edition, the whole point of the article, the purpose of its writing becomes clear after reading this thesis:

Does such a warlord need a monument in Ukraine, where he personally sent to death 1,5 million mobilized Ukrainians who survived the heavy German occupation and liberated their land at the cost of their own enormous human losses?

Ctrl Enter
Noticed a mistake Highlight text and press. Ctrl + Enter
We are
In Mongolia, a four-meter monument to George Zhukov was erected23 January 1943 G.K. Zhukov was awarded the title of Marshal of the Soviet Union
129 comments
Information
Dear reader, to leave comments on the publication, you must to register.