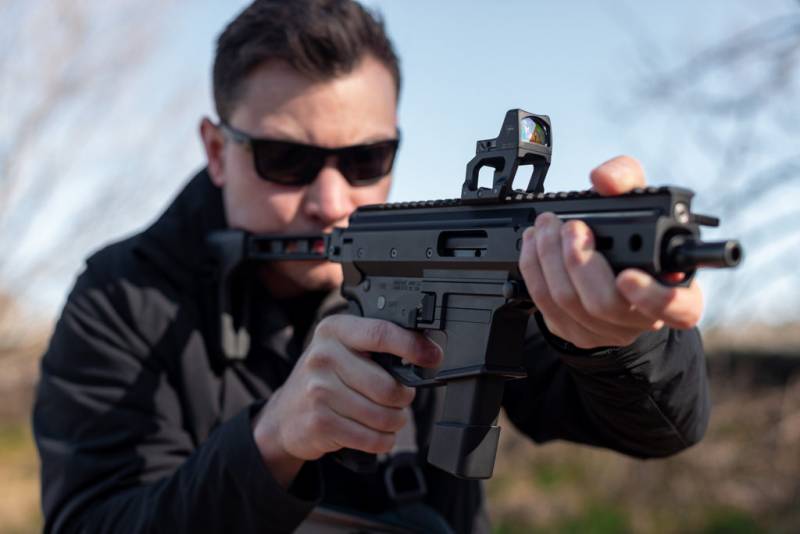 Here it is, a submachine gun company Angstadt Arms with a half-free roller shutter

Weapon and firms. In our material about "Family" rifles AR-15 it was a question of the fact that many companies producing this rifle in the version of sports weapons sprang up around the world. It would seem that it is already impossible to find something completely new here, well, unless someone creates on its basis a 12,7-mm carbine. Nevertheless, the enterprising people of many countries of the world do not stop thinking about what else to turn this rifle into. And again, there is everything for this. There are companies that custom make you any barrel lengths, any caliber and with any pitch rifling. There are programs that allow you to make a receiver for this rifle of any configuration on a CNC machine, with any tolerances and any additions generated by your imagination. There are companies that will give you the appropriate coverage ... Or put equipment for this on lease. 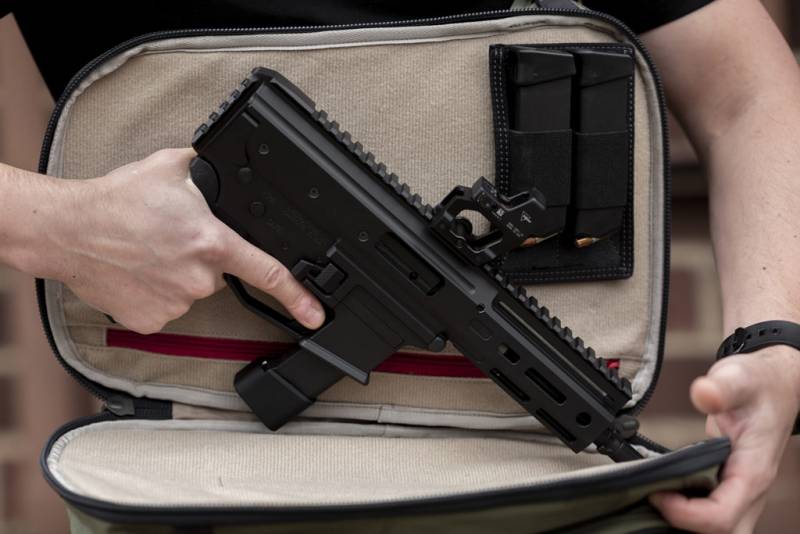 Here in this photo you can clearly see that it is very small in size and fits entirely in a small bag ... 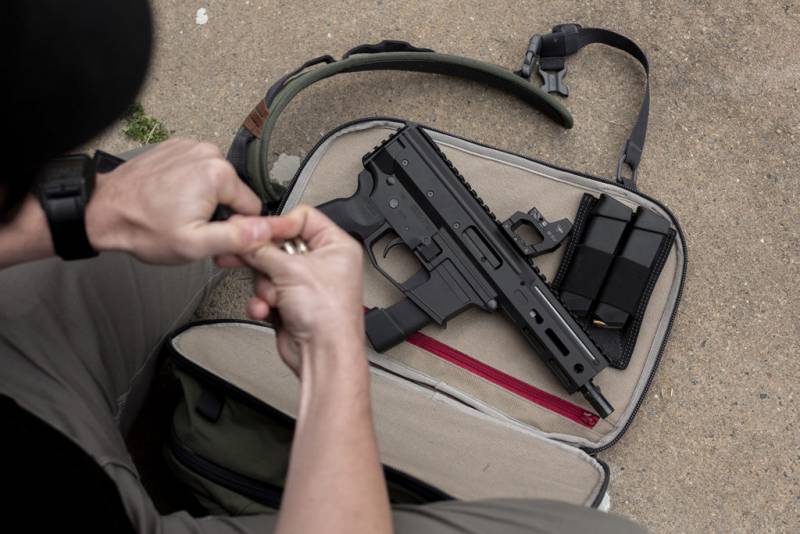 There are also two spare shops in it.
In addition, the AR-15 design itself is so simple that it is very easy to remodel it under different cartridges. What different companies also do, redoing it even for a 9,5 mm caliber! But you can actually upgrade the rifle in the opposite direction, that is, reducing the power of the cartridge. Instead of using a rifle, use a pistol cartridge and thus get a submachine gun! 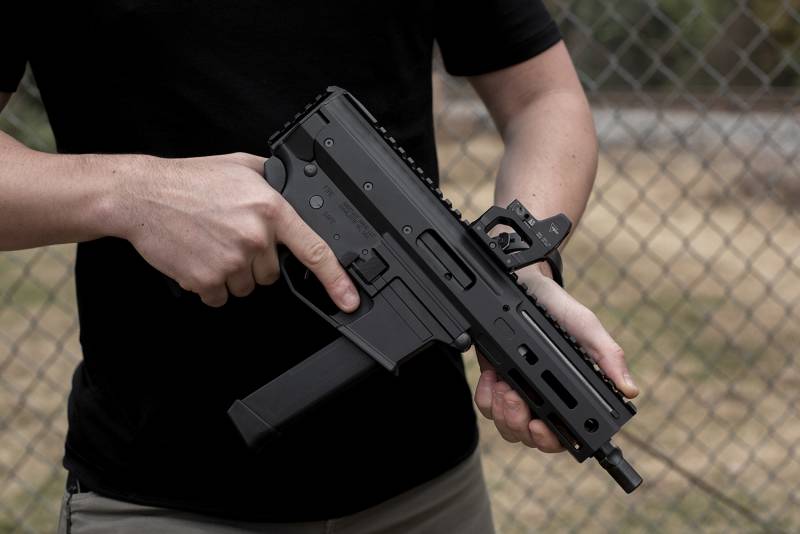 The weapon fits comfortably in your hands! 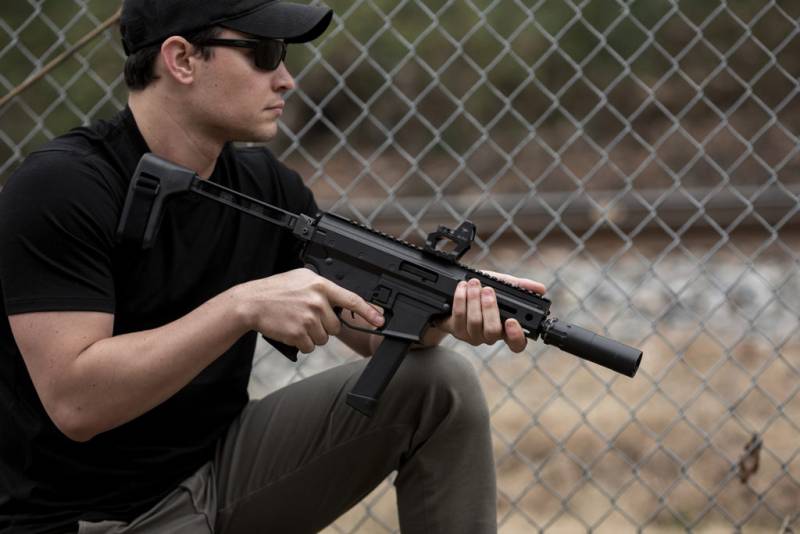 And this is how the MDP-9 looks with a silencer
The American company Angstadt Arms, so named after its creator Rich Angstadt, who tried her hand at developing PDW weapons - “personal defense weapons”, a simple and effective submachine gun — was engaged in similar design. The company appeared relatively recently, but has already developed a model of a compact rifle UDP-9 under a pistol cartridge. It was created in collaboration with Keystone Armory.

UDP-9. Right view. In fact, this is a semi-automatic carbine based on the AP-15, but made under a pistol cartridge of 9 mm caliber. Moreover, in principle, its device is such that it is possible to use cartridges of 11,43 mm caliber, and 7,62 mm - in short, any pistol cartridges!
The barrel has a length of 152 mm and is equipped with an integrated silencer. According to Rich Angstadt, this muffler can quite successfully drown out the sound of a 9 mm subsonic ammunition. The rifle, and in fact, a carbine or, rather, a submachine gun, since the guns use pistol cartridges, is compatible with all accessories from the AR-15, as well as with Glock pistol magazines, including twin ones. The use of the latter, as well as elongated, is especially important, since the standard magazine of this gun holds only 17 rounds.

This is how the lower receiver looks to it ...
“We realized that people needed a more compact rifle AR-15, and we did it. Moreover, it is compatible with Glock pistols - the most popular pistols on earth, "
- said Rich Angstadt.

And here is UDP-9 in the color “federal titanium”. The pistol grip of the Magpool company, so you don’t have to bother with many details for your own production. Trunks, handles, trigger, shops - all this is ready-made. It remains only to collect, add your own "cherry on the cake", and ... the production is ready!
Further more. Work on the creation of a portable model of the "arch" was continued, and the result was an ultra-compact sample of personal defense weapons AR-9 (MDP-9), also having a caliber of 9 mm and also compatible with magazines from the Glock pistol, but with a patented roller shutter delayed action. It turned out that this is a quite worthy competitor even to the well-known German MP-5 submachine gun from Heckler & Koch, which also uses a roller shutter. Actually, even when this pistol made its debut on the market, its locking system with a semi-free roller shutter just became its main "highlight", which made it a cashier! But time passed, and it turned out that you can do something similar and not worse, but better and more compact! 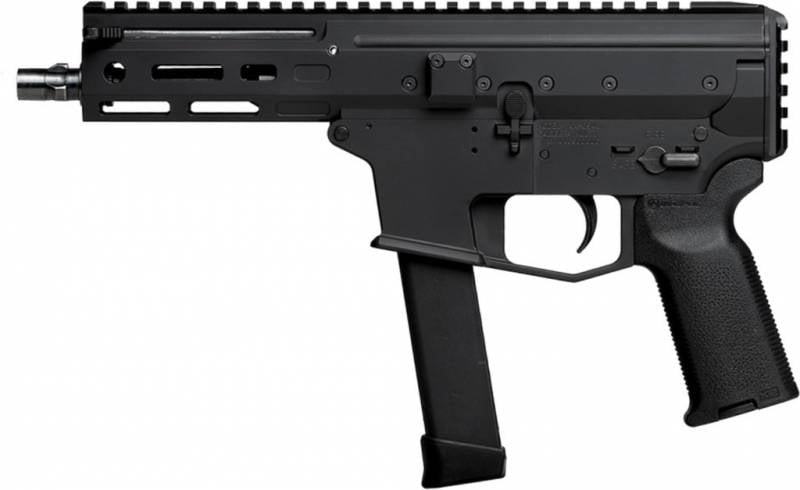 Well, this is already the “narrative hero” itself - MDP-9 close-up, left view 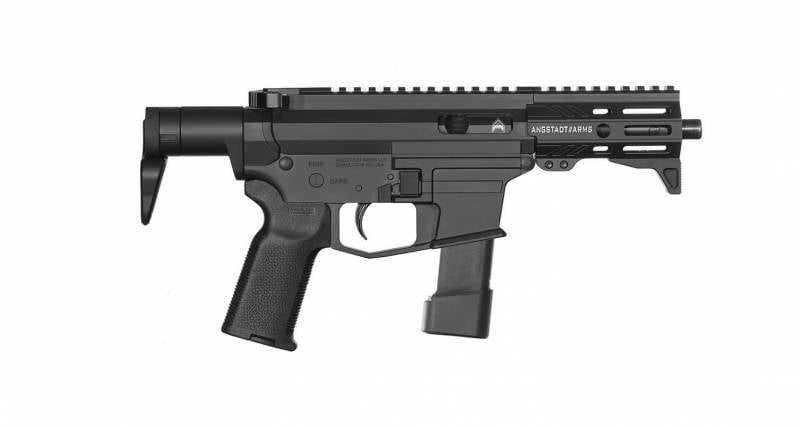 Ultra-short model MDP-9 - SCW-9, right view
The reason why the German company chose to use a half-free shutter is understandable. According to the terms of reference, it was required to create a submachine gun under the Luger 9-mm cartridge with high firing accuracy, and it was not possible to achieve this when using the free shutter. As a rule, submachine guns fire from an open bolt, which leads to a shaking of the weapon even before the shot. With a semi-free shutter, this does not happen. The barrel at the time of the shot is locked and opens more slowly than in systems with a free shutter. Hence the lower rate of fire and better controllability of weapons by the shooter. 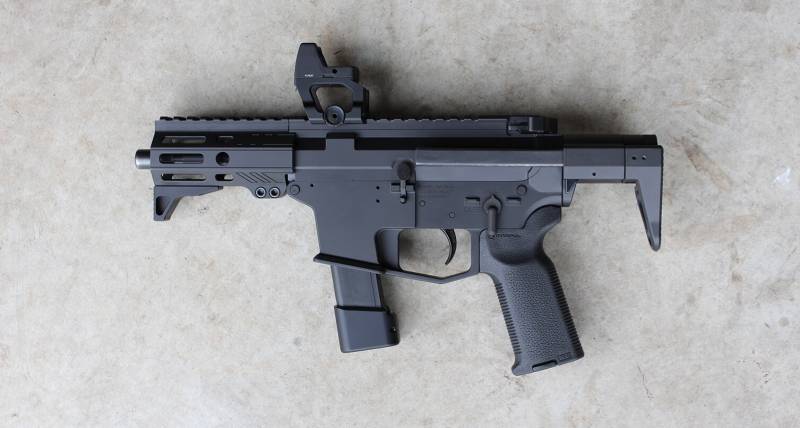 SCW-9, left view
So in this design, the applied semi-free shutter with roller retardation provided, according to the company, both reduced weight and lower recoil, which, in turn, turned their PP into "one of the softest shooting submachine guns of this caliber on the market." Well, you can say anything for advertising purposes, the words are air, they were there and they aren’t there, but in this case there is confirmation of this statement: MDP-9 was already bought in 30 countries. Moreover, it is emphasized that the submachine gun is made on the AR-15 platform and is fully compatible in some parts with the AR-15 / M4. In addition, a number of its devices, such as, for example, collimator sights and Picatinny rails, can also be installed on the AR-15 / UDP-9. It is noted that such compatibility makes this model an ideal weapon system for both professionals and trained citizens who want to have such weapons for self-defense in emergency situations. It is noted that the civilian model is not yet available, but in accordance with US law, it will not be able to conduct automatic fire and will receive a longer barrel. Today it is one of the shortest submachine guns that fits easily in a small leather bag! 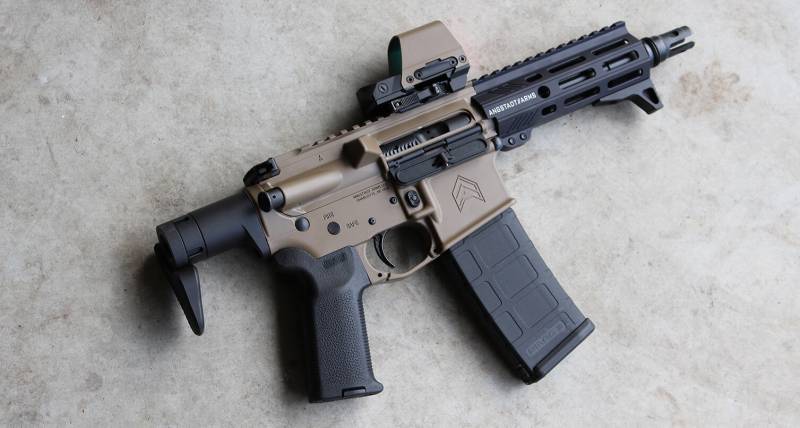 Another variety of a very short “arch”, nowhere shorter: SCW-300. The Picatinny rail on the receiver is fully aligned with the rail on the forend, which allows you to install accessories of any length on this sample
Since the buffer tube on the MDP-9, which is characteristic of all arches, is absent, it turned out to be very short and this is its great advantage. The butt is attached behind the Picatinny rail, and there are two options: one folds to the side and the other retractable. The solution is rather unusual, but it allowed to significantly shorten this “product”. That's why they made a case for him. In it, it is conveniently tolerated, without annoying anyone with its appearance, but it is necessary - it is opened, pulled out and shoot!

The barrel of the submachine gun has a length of 148 mm, with a chamber, equipped with Revelli grooves. The reload handle is located on the left, but can also be moved to the right side. Which is again convenient for any shooting public. When shooting, it is also motionless. The Picatinny rail is solid. With a total length of 355 mm, a submachine gun without cartridges weighs only 1633. Its cost in the USA is 2599 dollars. With a butt folding sideways, $ 200 more. Well, why so, it’s clear: the device turned out to be more complicated. 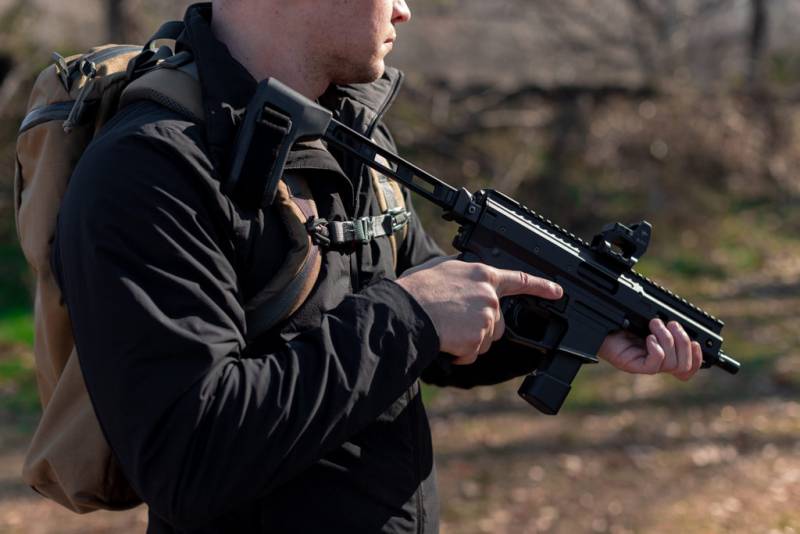 In February 2020, a set of parts for 9 mm caliber went on sale, including a receiver and an ultra-light receiver with a length of 127 mm, in the color “titanium terracotta”
To be continued ...