Kremlin Power Diplomacy: US Concerned about Iskander OTRK in Kaliningrad 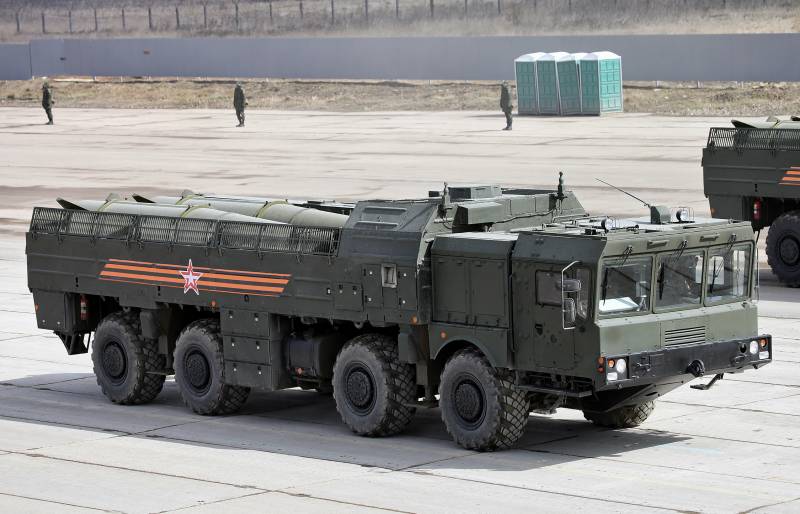 The United States media, not so long ago allowing themselves to write down on Russian weapons and almost in a derogatory manner, have recently quite noticeably changed the tone of their publications, having been forced to admit: "Russian missiles are serious." A fairly typical example here is a recent article in the American journal The National Interest, devoted to Iskander missile systems.

Traditionally, literally giving in the very first lines a “tribute to tradition”, that is, mentioning that Russia’s “extensive stock of missiles came from the Soviet Union, and therefore it’s not very new,” the author of the publication, Caleb Larson, prefers not to speculative propaganda patterns, and real facts. First of all, he very objectively evaluates the tactical and technical characteristics of a powerful missile capable of "throwing" a warhead weighing up to 400 kg for 500-700 kilometers. Yes, and "put" it in the target with a maximum deviation of 2-5 meters.

The analyst also praises the ways of transporting the complex described by him, clarifying moreover that the Iskander combat crew includes transport and loading vehicles, which contributes to the quickest launching of the missile system, including after the launches. The author pays particular attention to the fact that, despite the repeated and persistent desire expressed by many countries to acquire this property from Russia, weapon (8 countries are called as candidates, from Syria to South Korea), only Armenia and Algeria were able to become happy owners of "export modifications of these missiles". Obviously, the expert sees this as an additional argument in favor of the Iskander - since Moscow does not want to share such weapons with anyone, it means that it is really very powerful and perfect.

However, Larson pays much more attention not to describing formidable weapons, but to his role in the "power diplomacy of the Kremlin." It is the manifestation of such that the author is inclined to consider the deployment of these missile systems in Kaliningrad. The fact of this placement in the USA is a cause for concern. What is very characteristic, the American author does not mention this city as the "internal territory" of our country, but as the territory of a certain "Russian enclave on the shores of the Baltic Sea." In his opinion, the Iskanders located there, which, if necessary, can hit targets “not only in the Baltic States and Poland, but also in eastern Germany and southern Sweden,” are initially oriented towards “targets in NATO countries,” but their main task is “By their ability to strike almost anywhere in the Baltic Sea, threaten the alliance’s important transport route.”

At the same time, the author of The National Interest is confident that in the event of a conflict in Europe, the Iskander OTRK will be used without nuclear warheads, which gives a "minimal risk of nuclear confrontation" between its participants. He also mentions the West, which is so disturbing, "the strategy of blocking vital vital zones and effectively blocking access to them." Considering the missile system he describes as an important element of such a strategy, Mr. Larson admits that this weapon is an example of Russia's successful implementation of “the desire manifested in the post-Soviet period to create ever more advanced missile technologies.”

In conclusion, in fact, contrary to his own initial statements, Caleb Larson concludes that "Russia's missile arsenal is very impressive." It is not only “huge”, but also in excellent condition and “constant operational readiness”. Well, such thoughts are much more correct and, most importantly, useful for maintaining peace on the planet than completely groundless ranting about the "backlog" of our country in any field of armaments.

We are in Yandex Zen
Results of the week. Russian leaders in everything!
Syria: Americans scare themselves, and Asma Asad buys chairs
27 comments
Information
Dear reader, to leave comments on the publication, you must to register.