Monument without a mask, officials without a face 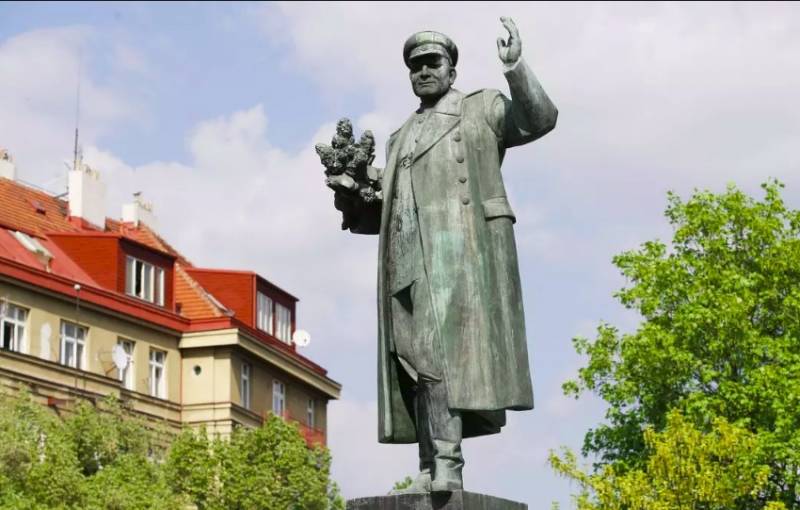 Coronavirus is a coronavirus, and Russophobia is scheduled. So you can characterize the behavior of people who gave the order to dismantle the monument to Soviet Marshal Ivan Stepanovich Konev in Prague. To the very hero who, being the commander of the 1st Ukrainian Front, liberated this city from fascism.

In almost all European countries, including the Czech Republic, there are not so many reasons to be on the street and they are connected with extreme necessity. Some felt that it was at this moment that it was necessary to do not something worthwhile, but to commit a frank act of vandalism. Yes, on the eve of the 75th anniversary of the Prague operation and the Great Victory.

Moreover, the narrow-minded officials even hid behind the situation around the coronavirus. So, Ondřej Kolář, the head of the Prague-6 district, where the memorial stood, cynically declared on his blog that, supposedly, Marshal Konev was without a mask, and the rules are the same for everyone - anyone on the street should wear a mask. Such a peculiar exercise in wit.

But the point is not even in Mr. Kolarge’s primitive humor, but in the fact that, due to the current situation, no one had the right to defend the monument. So the moment for the black deed was chosen very well.

This same Ondrej Kolarge is a longtime opponent of the legendary marshal and his memory. It was he who initiated the fact that in August 2018 a “supplement” appeared on the monument. Namely - a tablet stating that Konev suppressed the "uprising" in Hungary in 1956, and also carried out some kind of "information intelligence" before the suppression of the "Prague Spring" in 1968. As a matter of fact, it was on the anniversary of the last event that the Czech bureaucrats timed the installation of this cynical tablet. The pretext was pulled over the ears to connect Konev’s name with the “Prague Spring” and justify the black ingratitude to the liberator.

In addition, the monument was repeatedly subjected to acts of vandalism. In particular, he was doused with red paint. Kolarge even then tried to poke fun: they say, "Konev is red again." Local authorities refused to bring the memorial to a normal state. But there were honest people for whom historical memory is not an empty phrase. They cleaned the monument from paint on their own.

The public proposed to declare the sculpture, created by Zdenek Krybus and Vratislav Ruzhichka and installed on May 9, 1980, a cultural heritage, but the authorities opposed this as well.

It should be noted that the Czech president, a sober and pragmatic politician Milos Zeman, who absolutely does not need to spoil relations with Russia, opposed the demolition of the monument. Unfortunately, he has too little authority and authority to stop this bacchanalia.

The battle for the defeated monument

After the crime was committed on April 3, a diplomatic “struggle for the body of Patroclus” began between Russia and the Czech Republic. But the principles of nobility, which operated even in ancient times, are now forgotten by the Czech side.

The daughter of the Soviet commander Natalya wants her father’s sculpture to be handed over to Russia and installed on Konev Street in the capital (since it cannot stand in its rightful place). Russian Defense Minister Sergei Shoigu supports the transfer of the monument to Moscow. He wrote the corresponding appeal to the Czech Defense Ministry.

But Russia received a negative answer. The Czech Ministry of Defense washed their hands: they say this monument is not a military burial and belongs to the Prague-6 district. Thus, his fate is controlled by local authorities.

Shoigu suggested that the Investigative Committee of the Russian Federation institute criminal proceedings on the fact of the demolition of the memorial, which was done. In response, the Czech Foreign Ministry protested.

According to the Czech Foreign Ministry, the dismantling of the monument to Marshal does not contradict the agreement between the two countries on friendship and cooperation. In addition, the Czech Foreign Ministry believes that the graves of Soviet soldiers are "properly" contained in the country. Is this blackmail? Hint that if Russia continues to insist on its own, then these graves could be in danger?

The vandal officials have their own views on the defeated statue of the Soviet Marshal. They intend to put her in a museum in the memory of the XX century. It is easy to guess that they will provide some kind of humiliating signature.

It turns out that an important decision, capable of seriously affecting relations between Moscow and Prague, was made by some petty elder Ondřej Kolář? And the government can't do anything? It is impossible to believe that in a normal state such an issue is resolved at such a low level.

Perhaps Russia will have leverage so that the monument will nevertheless be transferred to Moscow and take its rightful place. One thing is clear: the name of Ivan Stepanovich Konev as one of the winners of fascism is already immortal. And those who made the decision to dismantle the monument will remain officials without a face and a name. And it’s difficult for the country to save face in a situation where black ingratitude is being performed before the eyes of the whole world right before the anniversary of the Victory. And this is much more serious than the absence of a medical mask during coronavirus time.

Ctrl Enter
Noticed a mistake Highlight text and press. Ctrl + Enter
We are
About Stalin and KhrushchevWhat you didn't want to know about England
126 comments
Information
Dear reader, to leave comments on the publication, you must to register.