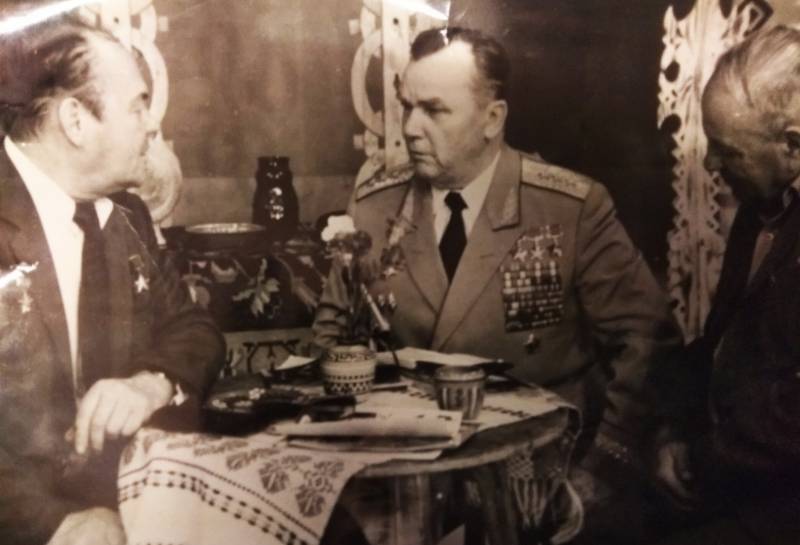 The family archive contains a photograph about the origin of which (how it got on the album and when) there is no one to ask, alas. Three times Hero Kozhedub was known to every Soviet boy. But about his older interlocutors could be read on the back of the picture

The photo was not published anywhere, information about this meeting could not be found. 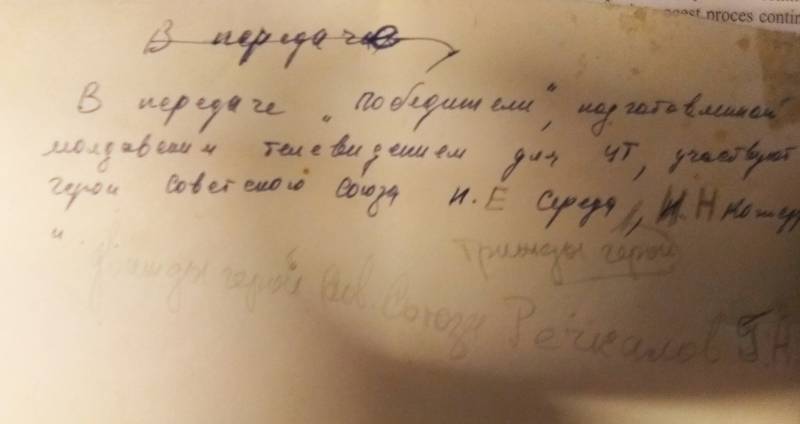 How did you get six heroic stars in one TV show?

What, in addition to shared memories, connected after many years of our heroes? When exactly did they meet?

Judging by the entries on the back of the photo, the information from the signer was incomplete, he did not know all the participants, did not know the names and patronymics, and the corresponding changes were made with a simple pencil. Perhaps this photograph is part of the working material for the preparation of a television program. The fact is that Sereda Pyotr Selverstovich is repeatedly mentioned in Pokryshkin’s memoirs, and it is not surprising that he is also a Hero of the Soviet Union, but he did not take part in hostilities on the territory of Moldova.

It is known that Sereda I.E. fought under the command of I. Kozhedub in one regiment, which took part in the liberation of Moldova. These are the aces of the second stream of Soviet fighters, who opened their account after 1941. And Rechkalov G.A. with the future Marshal A. Pokryshkin, in addition to participating in the liberation of Moldova, fought together from the first days of the war as part of 55 IAP during the defense of Moldova.

The liberation of Moldova as part of the Iasi-Chisinau operation and the participation of Kozhedub fighters in it are documented according to all the rules of the headquarters culture. Feats are well known. But for many, the initial phase of the war looks stereotyped: "The Germans destroyed almost all the planes at the airfields."

It was in the sky over Moldova, over the city of Balti, that there was a serious opposition of Soviet pilots to the first blows of the German aviation. These detailed studies of open archives were conducted by Mikhail Timin ( "Pokryshkinsky regiment: the beginning of the way").

Having immediately entered the battle, the Germans for some time were able to turn the tide in their favor, and two MiG-3s fell to the ground, and the planes of the first strike group, which were running out of fuel, were able to leave the battle. But by this time all the aircraft of the 1st and 2nd squadrons of the 55th IAP were already in the air, and the JG 77 pilots lost their numerical superiority. As a result, they had to retreat, and the "battlefield" remained with the Soviet fighters, who pursued the enemy to the border.

This was the first serious victory of the 55th IAP. The Germans did not manage to inflict serious damage on the airfield of the regiment — they were put to flight, having lost one Messerschmitt. Perhaps, on this day, not a single regiment on the entire Soviet-German front succeeded in fighting off two consecutive attacks by German fighters. Nevertheless, it must be admitted that the main role in disrupting an almost perfect German plan was played not by some tactical techniques or the perspicacity of the command (in the end, the attack was missed again), but by the personal courage and skill of several pilots of the 1st squadron.
Among the honorable residents of the city of Balti we find the names of air acescaptured in the photo.

It could be assumed that as part of this celebration, its honorary residents arrived in Balti and invited the pilots to the program “Winners”. Pokryshkin, occupying a high post of deputy commander of the KVO, may not be able to attend the event.

I hastened to share my find and conclusions with the famous local historian Y. Shvets, who scrupulously explores military photo chronicle, collects and recreates from the fragments of the historical events of Moldova and publishes unique photographs of wartime.

Alas, no. I made a mistake with the conclusions. Having once again examined the photo and studied in detail the biographies of the heroes, I realized the inexcusability of hasty conclusions.

A war veteran is a deeply elderly person. This is the stereotype that has developed over the next generations. He misled me as well, and comparing the year the title of honorary citizen of the city of Balti was awarded with photography did not cause a contradiction in logic.

The error became clear. In 1966, our heroes were only 46 years old. And in the photo we see the handsome Kozhedub and the elderly in the "citizen". How old are they? Kozhedub looks at 55, Rechkalov in the photo is 60 years old, and Sereda is already under 65. And they are almost the same age. The officer in reserve, unfortunately, is aging faster than in uniform. Determining the year of photography by the age of the heroes is quite difficult.

The answer to the date after many years was suggested by Kozhedub's tunic. In the photo he is wearing epaulettes of the colonel general, and the marshal was assigned to him on September 7.09.1985, XNUMX.

We can say with confidence that the meeting of famous pilots took place on the 35th anniversary of the Victory, in May 1980 at a television studio in Chisinau.

Each of the heroes in the photograph left his memoirs and shared memories for the next generations. They knew the brutality of war and the price of victory.

Unfortunately, they passed away, as the last living witnesses leave today, and can no longer publicly defend themselves, protect history of their homeland from hushing up and belittling the exploits of their people, neither in prime time on television, nor in general.

The photo of the heroes did not sink into oblivion, but became the property of society. The conclusions are not pathetic, but rather forced: our turn has long come to protect the memory and valor of the now silent heroes from reproach. All decent people, and there are many, each of them needs to protect the honor of our ancestors from those whom they defeated 75 years ago. No one else.

Ctrl Enter
Noticed a mistake Highlight text and press. Ctrl + Enter
We are
Without feat and heroismTo remember. My native women in the war
17 comments
Information
Dear reader, to leave comments on the publication, you must to register.