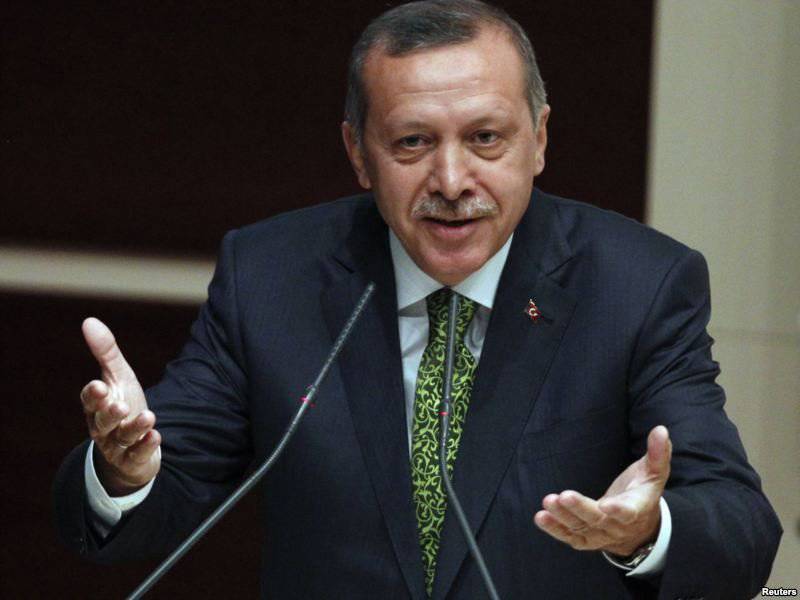 Turkish Prime Minister Recep Tayyip Erdogan officially appealed to Russian President Vladimir Putin with a sensational request to accept Turkey as a member of the Shanghai Cooperation Organization (SCO). He said this in an interview with "24 TV". "Despite the fact that we have done a lot for European integration and even created a separate ministry, but French President Nicolas Sarkozy and German Chancellor Angela Merkel blocked this process. Before Sarkozy and Merkel arrived, I participated in summits of EU leaders. Afterwards, it was decided to minimize relations with us But we have not suffered from this. Now everything is before our eyes, where is Europe, where are we, is it unknown whether Europe will remain until 2023, I offered Putin to accept Turkey to the SCO, and he promised me to consider this issue with other partners on this organizations "- stated the head of the Turkish government.

Let's start with the fact that back in 2005 Turkey achieved official recognition by the European Union of its status as a candidate for EU membership. After this, the accession negotiation process, including 36 global sections or "chapters", was launched. These include aspects such as civil society norms, principles of freedom of the media, norms of civilian control over the special services and the armed forces, mechanisms for regulating all types of markets, ways to control migration, concluding various agreements on free exchanges with the EU and much more. These talks go and go with constant pauses. She also had an intrigue when Ankara threatened to “freeze” its relations with the EU in protest of the entry of the Republic of Cyprus into the EU presidency on July 1. In response, Turkey promised to launch a program to abolish the visa regime with the EU countries - and nothing more.

It was at the time of this complex negotiation process at the summit of the SCO Heads of State in Beijing that Turkey received the status of a dialogue partner. But then this fact, many Turkish politicians, and the media, did not try to particularly advertise. Now the situation has changed, and, above all, in the economic sphere. The fact is that the current model of the Turkish economy is mainly focused on the export of products to European countries. But in the conditions of the economic and financial crisis experienced by the European economy, the level of consumption of Turkish goods began to fall noticeably, which already affects the state of the country's economy. Turkey’s failure to justify itself that, as EU Minister Egemen Bagis said, “Turkey can assist the EU in overcoming the crisis, since its economy is the strongest and healthiest in Europe”. Europe refuses to help Turkey. At the same time, many Turkish experts had previously warned the government about the need to reorient the commodity-economic flow from the West to the East. There, where, unlike in Europe, integration processes are gaining strength. The Customs Union works, the Eurasian Economic Community (EurAsEC) operates, the structures of the Common Economic Space (CES) are built, the Shanghai Cooperation Organization (SCO) and the Asia-Pacific Economic Cooperation (APEC) are gaining strength. But in order to work in this region of the world, Turkey will have to undergo a serious revision of the means and methods with which it tried to achieve its goal - strengthening the status of a leading regional power.

Recall that in recent years, Ankara has been doing a lot in terms of establishing cooperation, primarily with neighboring Islamic countries. However, in the course of events related to the phenomenon of the so-called "Arab spring", the American list became more pronounced in Turkey’s foreign policy, which led to a narrowing of the range of its main directions of the country's foreign policy. Paradox: the implementation of the current foreign policy led to the fact that the country was not only in the "ring of enemies", but also began to balance on the verge of involvement in a regional war, fraught with it even for the loss of part of their territories in the event of a "Kurdish child". This is how the scenario, which the Turkish Daily wrote about in the 2007 year, is carried out, warning that the United States, supporting the establishment of Kurdish statehood in Iraq, will leave Turkey without alternative action options.

However, as it turns out after the Erdogan interview, now for Ankara the SCO membership is an alternative way out. At the same time, the head of the Turkish government is trying to gain time so that the effect of the role it plays is not resolved - for the first time in its latest stories - Turkey in the Middle East. Moreover, the SCO countries, having accepted Turkey into their ranks in the status of a partner, did not stipulate this for any political conditions, which means that they recognize Turkey as the leading regional power.

On the other hand, for Turkey, the intensification of cooperation with the countries of Eurasia opens up unprecedented horizons for the export of its products and participation in large-scale energy projects. We note another important feature. One of the main principles of the SCO is to ensure regional security and stability. This is the focus of the 2013-2015 Cooperation Program on Combating Terrorism, Separatism and Extremism and the new edition of the Provision on Political-Diplomatic Measures and Response Mechanisms to Situations Threatening Peace, Security and Stability in the Region. So, Ankara again faces a serious choice in its future foreign policy strategy.