Alexander Lukashenko is preparing for the “Belarusian autumn” 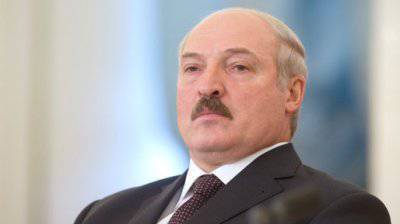 The next attack towards the Belarusian president deigned to execute European politicians. This time, Alexander Lukashenko was awaiting refusal of accreditation to attend the XXX Summer Olympic Games, which started in London. At the same time, the organizing committee of the London Olympiad initiated the prevention of Lukashenka to London, apparently forgetting that Alexander Lukashenko is not only the president of Belarus, but also the main National Olympic Committee of this country. Although today such "trifles" are of little interest to "democratic Europe." The motivation for preventing Lukashenko from entering the capital of the United Kingdom was as follows: the president of Belarus is denied entry into the territory of the European Union, of which Britain is a member. Like, we are not, life is ...


Lukashenka didn’t organize reverse demarches on this occasion, but simply stated that “the Olympic Games are not a sport, it’s a policy. Dirty politics. And today it is difficult to disagree.

Indeed, since the end of the famous scandals and boycotts of the 80s of the last century, although 3 has passed decades, it seems that someone is still ready to actively mix sporting events with politicking in its purest form. What is worth even an invitation to the Olympics of the leaders of the partially recognized state of Kosovo - President Yahjaga and Prime Minister Taci, who since the beginning of the Kosovo company has been accused of participating in the massacres of the civilian Serb population.

The fact is that both Yahyahu and Hashim Tachi are classic Western henchmen in the Serbian land, but Mr. Lukashenko has a bone in the throat of “tolerant” Western politicians who are not going to dance to their tune. Naturally, this position of the Belarusian president brings the West to a white-hot.

It just so happened, or everything went to that even before the ban for Alexander Lukashenko to attend the Olympic competitions (most likely, the Olympic ban only fueled the initiative of Lukashenko), but the President of Belarus decided to announce the increased military security of his state. According to him, today there are enough examples in the world when certain forces, one way or another, solve their own tasks on the territory of other countries. As evidence, Lukashenko cited the Middle East with Western attempts to pressure the region.

In this regard, Lukashenko instructed the country's defense minister, Yuri Zhadobin, to “closely look at the already reformed Belarusian army.” Such an order is connected with the fact that the Belarusian leader is seriously afraid of the transfer of the “Arab spring” to the territory of Belarus after the parliamentary elections in this country, which will be held on September 23. And so that the “Arab spring” suddenly does not become a “Belarusian autumn,” quite significant shifts are already taking place in the Belarusian army today.

For example, the Deputy Head of Defense Department for Logistics, Major General Alexander Boligatov, lost his post not so long ago. In his place was Major General Vitaly Kireev, who had previously headed the Transport Department of the Ministry of Defense of the Republic of Belarus. A few months before Boligatov was dismissed, the president dismissed the commander of the airborne forces and air defense forces Sergei Lemeshevsky. Lemeshevsky was replaced by General Dmitry Pakhmelkin. At the same time, several other high-ranking officials in the Ministry of Defense (Deputy Minister, Deputy Chief of the General Staff, Chief of the Main Command of Combat Training) also lost their posts.

In other words, since the end of winter, the Belarusian president has almost completely updated the top of the Ministry of Defense, leaving Minister Zhadobin in his post. Passed information that personnel changes that were indicated above may not be the last. The threat of dismissal today is looming over those military commanders who, a little more than a month ago, allowed a light-engined aircraft with a “democratic” cargo to enter the territory of the Republic of Belarus. Then the plane, piloted by Swedish subjects, from the territory of the Baltic states entered the airspace of Belarus and “landed” teddy bears, which were designed to “agitate” for freedom of speech. Initially, the Belarusian military called photographs of the aircraft and “democratic toys” photomontage, and the publication’s employees, who were the first to publish these materials in Belarus, were sent to the SIZO. However, later Lukashenka himself admitted that the flight of a foreign side over Belarus took place, and therefore many big officials can answer for such negligence on the part of the competent structure (a direct analogy with the flight of Mathias Rust during the USSR).

According to Belarusian analysts, today President Lukashenko is less and less trusted to those people who are called upon to be responsible for security from external threats. That is why he tries to put “his people” at the helm of all Belarusian security.

Apparently, the events that took place after the parliamentary elections in Russia play a special role here. So that, as they say, not to tempt fate, the Belarusian president decided to “prepare sleds in the summer”, because the delay in this case may cost him too much. It is obvious that the West is ready to use any instrument in order to bring its proteges to power in Belarus, as it happened in the time with Ukraine and the coming to power of the orange ones. And if in the Ukrainian case, after the announcement by President Viktor Yushchenko of the West, something obviously went wrong, and the mistakes went one after another, then in the case of Belarus, we can expect more thoughtful actions. Especially since the mass discontent scenario is at the very least run in December Russia.

It is precisely such fears that lead the President of Belarus to the idea that it is time to strengthen the army and then use it to resist Western insinuations, which, as usual, can begin with non-recognition of parliamentary elections.

Recently, Belarusian gunsmiths reported that they managed to create the newest anti-tank missile system "Caracal", which includes several important systems: the intelligence system, technical support and support system, control tools, and, of course, the destruction system of enemy equipment. The Karakal radar system is capable of detecting ground targets at a distance of up to 20 km, as well as controlling the UAV at a distance of up to 30 km. The Skif defeat system, which is integrated into Caracal, affects any armored vehicle of the North Atlantic Alliance. In addition to fighting ground targets, the new Belarusian ATGM can easily cope with enemy helicopters.

In general, President Lukashenko, in the literal sense of the word, decided to come fully prepared for the autumn parliamentary elections in the country. His activity on this front raises questions for the Baltic neighbors, who, you see, are concerned, and why this “dad” suddenly decided to play muscles. So, as they say, "dad" does not like provocations ...

The whole question is whether all the above-mentioned means will help, if the interested persons decide to take advantage of the classic variant of using hundreds of thousands of Facebook users in the city squares of the country. True, Lukashenka already has the experience of bringing oppositionists to their senses, and for this, he may well do without Caracal. And the Belarusian president clearly drew his lessons from the December events in Russia ...

Ctrl Enter
Noticed oshЫbku Highlight text and press. Ctrl + Enter
We are
Belarusian nationalism is a weapon of the West against RussiaSafe Olympiad
101 comment
Information
Dear reader, to leave comments on the publication, you must to register.