Syria, April 11: US relocates military equipment to Iraq from Iraq 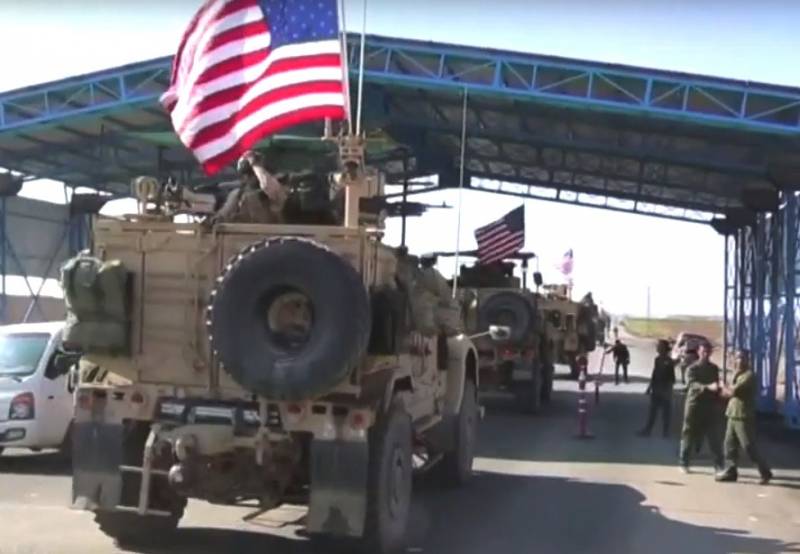 The militants of radical organizations operating in Idlib continue to attack government forces and try to disrupt joint Russian-Turkish patrols. Against this background, the US army is transferring military equipment from Iraq to Syria.


The situation with the M4 highway in Idlib province was even forced to stop in her speech by the official representative of the Russian Foreign Ministry, Maria Zakharova. As you know, the militants of the Khayyat Tahrir ash-Sham organization banned in Russia do not stop provocative actions aimed at disrupting joint patrols of the highway and the surrounding areas. In addition, the HTS continues to attack the positions of the Syrian government forces.

In response to the militant sorties, the artillery divisions of the Syrian Arab army were forced to fire at the positions of radical groups in the area of ​​the villages of Kansafra and Al-Fatir in the province of Idlib. Provocations of militants took place during the day and in the province of Aleppo. Here, militants fired on positions of government troops in the area of ​​Al-Akib, Al-Malikiya, Biena, Deir Jamal, Ziyara and Shavarigat al-Arz settlements. As a result of the actions of pro-Turkish groups, a civilian was injured.

While illegal armed groups are shelling government forces, Turkey continues to build up its military presence in Idlib. Two Turkish convoys with engineering equipment and building materials again passed through the Kafr Lusin checkpoint in the northern part of Idlib province. Concrete blocks are intended for the construction of regular observation posts of the Turkish army in Idlib.

The number of these points is growing almost every day, which indicates Turkey’s unwillingness to withdraw its armed forces from the territory of Northern Syria in the foreseeable future. At present, 58 Turkish observation and checkpoints have already been built in Idlib, and there is no reason to believe that the process of building new Turkish posts will end.

As Turkey builds up a military presence in Idlib, the United States behaves similarly in Hasaka province. Despite repeated statements by US President Donald Trump that Washington wants to withdraw its troops from Syria, the Americans are not going to free the military base in Hasak. This is evidenced, for example, by the entry of the next American convoy in Hasaku. A convoy of US military equipment proceeded from neighboring Iraq, passing through the Syrian-Iraqi border to Hasaka province, in the direction of the US military base in Al-Shaddadi.

The purpose of the transfer of American troops to Hasaka province is not reported. But Syrian sources have certain speculations: it is possible that American forces are being transferred to the province in order to ensure the production of Syrian oil. As you know, the United States is not just illegally present in the territory of sovereign Syria, but also is exploiting natural resources, illegally extracting and exporting Syrian oil from the country. At the same time, US appetites are growing and Americans are only going to increase oil production in Syria.

In turn, the Turkish news agency Anadolu reports that Russia is building up its military presence in northeastern Syria. According to Turkish media, a convoy of Russian military equipment entered the province of Raqqa and went to the village of Kamyshly. Turkish analysts attribute the transfer of Russian troops to the buildup of an American military presence in Hasaka province.

In the province of Deir ez-Zor, the Syrian Arab army is successfully fighting the main evil - terrorist groups. So, in the desert of Badiya al-Sham, patrols were carried out in order to identify "sleeping" cells of the Islamic State organization banned in Russia. It is this group that is particularly active in Deir ez-Zor. For example, IS bombers detonated a bomb along the route of the Syrian Democratic Forces (SDF) patrol, which are based on the formation of Kurdish militias.

In the province of Rakka, the main opponents of the Kurdish militia are Turkish-supported groups that attacked Kurdish positions south of Tel Rifat. In addition, the Turkish military reported the destruction of several activists of the Kurdistan Workers Party in Raqqa. Recall that this Kurdish party is recognized in Turkey as a terrorist organization.

Meanwhile, Nikolai Patrushev, Secretary of the Security Council of the Russian Federation, in his next speech spoke about the continuing high risks of the transfer of terrorists from Syria and Iraq to Russia. According to the Secretary of the Security Council, the defeats suffered by radical groups on Syrian soil force many militants to seek new countries to carry out their criminal activities.