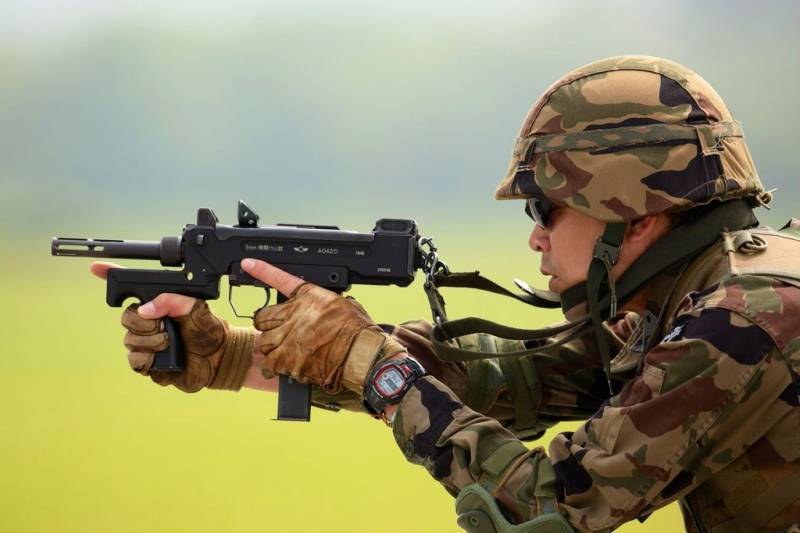 This is how Japanese soldiers fired from Minebea PM-9 in Iraq ... As you see, he has no stock

And I bear retribution in the name of the moon!
Usagi Tsukino / Sailormoon

Weapon and firms. That’s how it happens ... The material came out about a promising rifle of the Japanese army and the one and only photo in it, which did not even have a direct relation to it, aroused genuine interest in many VO readers. This is a submachine gun, which is in service with the Japanese paratrooper troops - Minebea PM-9. Moreover, Minebea is the name of the company that produces it. In the article, it was said that “the Japanese are not going to replace this 9-mm submachine gun based on the Israeli“ mini-Uzi ”. He already suits them! ” And it really is, but it’s interesting to learn more about it and, if there is such an opportunity, then why not find out? By the way, the example with this submachine gun is very revealing. The Japanese believe, and not without reason, that the frequent replacement of time-tested models of small arms, in general, is completely useless. The weapon must be reliable, convenient and well meet the specifics of its application, and in addition, also be cheap! 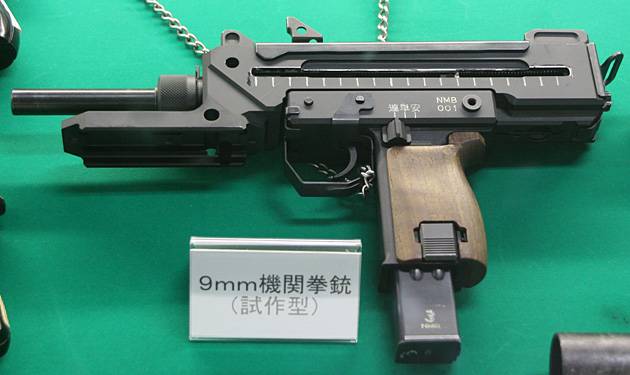 Minebea PM-9 prototype. The cuts on the case are made so that the operation of its mechanism is visible
Well, it started история of this Japanese submachine gun with the fact that it was the Israeli Uzi that the experts declared one of the most effective guns of its time almost immediately after it appeared in the mid-1950s. His popularity provided him with good sales, and some countries engaged in his (both licensed and unlicensed) production. Well, over time, other, even more compact samples appeared in his family, such as Mini-Uzi and Micro-Uzi. Borrow "Uzi" or copy it immediately began in many countries around the world. Somewhere it turned out worse, somewhere at the level of the base model ... 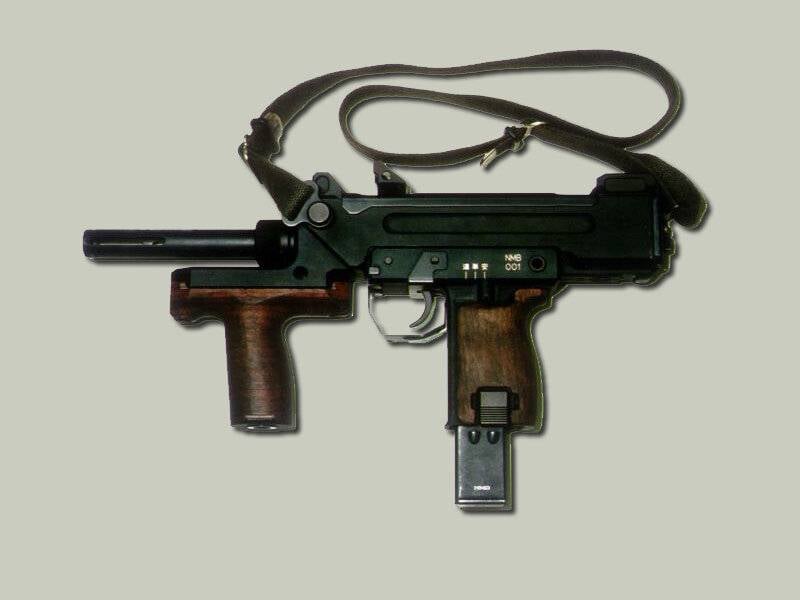 The first production sample of Minebea PM-9
When in the 1980s, the Japanese Self-Defense Forces (JSDF) had to choose compact automatic weapons for their various services and special units, their choice fell on the tried and tested Uzi. The production of the licensed sample was carried out by Minebea (formerly Nambu Arms Manufacturing Company), and the sample itself received the designation “PM-9”. It should be noted that by this time the company had already produced the Swiss semi-automatic service pistol SIG-Sauer P220, and the Japanese especially liked the fact that this new model could be produced on the same equipment. At the same time, the PM-9 was not a priority, since it was primarily intended for arming the soldiers of the second and third lines, such as gunners, drivers of vehicles, crews of military vehicles and security personnel. Some of them were also supposed to go into service with the Japanese special forces, fighters who quickly appreciated its firepower in close combat and compactness. The latter was of great importance precisely in Japan, since the Japanese themselves never differed in heroic growth and physique. 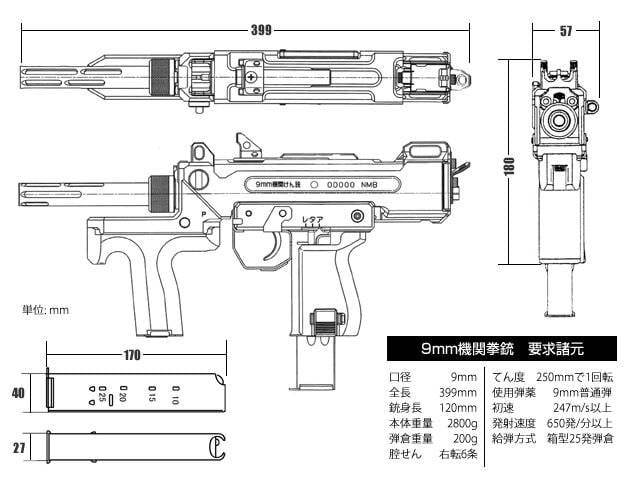 What is good about Japanese weapons editions is that they provide beautiful graphic images. This is the difference between Model Grafix magazine and many other magazines. The location of the slots of the flame arrester-compensator, which is screwed onto the barrel of a much shorter length, is very clearly visible. There are holes on the store that help to judge its filling. 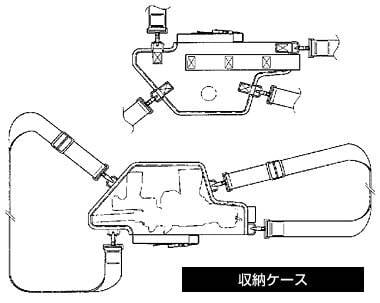 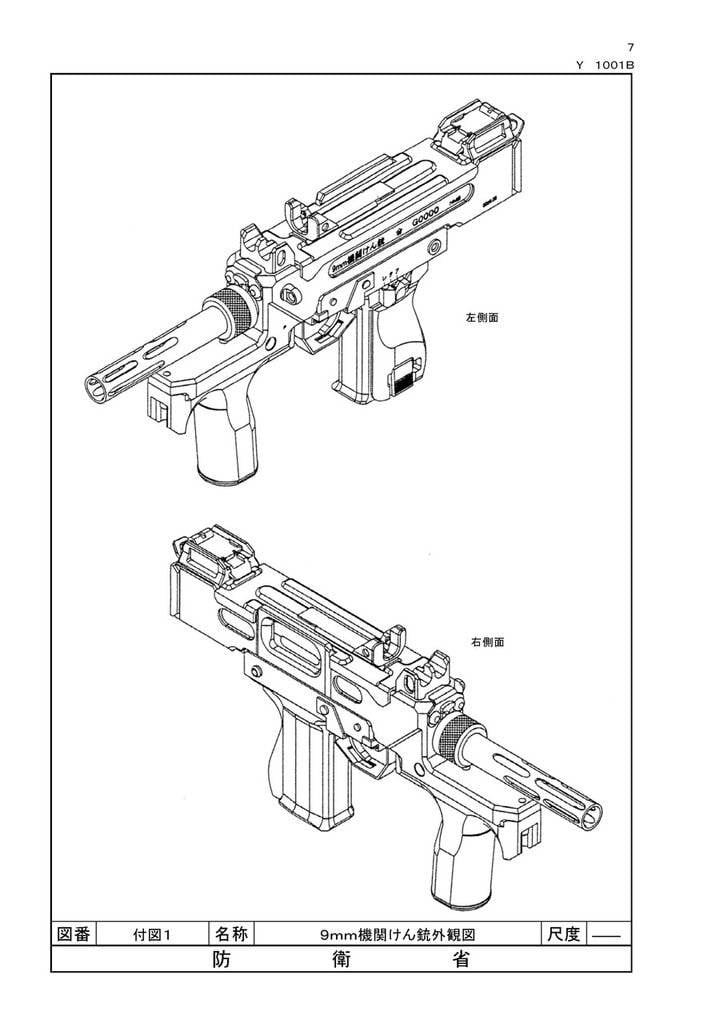 Types of PM-9 in a perspective view
In fact, it cannot be said that the Japanese were in such a hurry with the development of a submachine gun. The only notable Japanese design was created after the Second World War, the Nambu M66 (or SCK Model 65/66), it was clearly far from ideal. It was developed in the early 1960s by the Japanese company Shin Chuo Kogyo (SCK) and subsequently adopted by the Japanese Self-Defense Forces. Due to strict Japanese laws, this submachine gun was never taken out of Japan. The SCK-66 submachine gun, which appeared a little later, looked similar to the Model 65, but had a lower rate of fire. 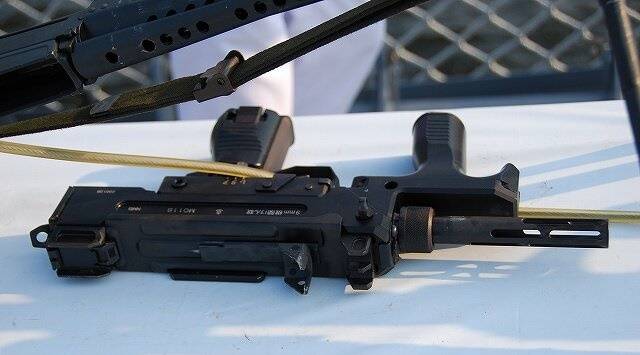 The cocking handle has a slot for easy aiming, as it is located on top, and it also has a plate that closes the hole in which it moves, preventing dirt and dust from getting inside
In general, it was a simple weapon firing from an open shutter and only fully in automatic mode. The sleeve outlet had a dust cover that had to be opened manually before shooting, since it had a small protrusion that blocked the shutter if the cover was closed. This safety feature was complemented by an automatic fuse in the form of a sufficiently long lever located at the rear of the store receiver. To turn it off, the shooter must hold on to it with his left hand and firmly press it to the store case. The magazine platoon handle was on the right side of the receiver and remained stationary when fired. The barrel had a tubular casing, which, for some reason, did not have holes or slots for cooling. The folding butt was made of thin steel pipes. Considering this submachine gun, we can say that its design was influenced by such foreign models as Carl Gustav SMG and the American M3 Grease Gun. However, the heavy weight, 4 kg without cartridges, as well as the dimensions did not leave him any chances after the appearance of the Uzi. 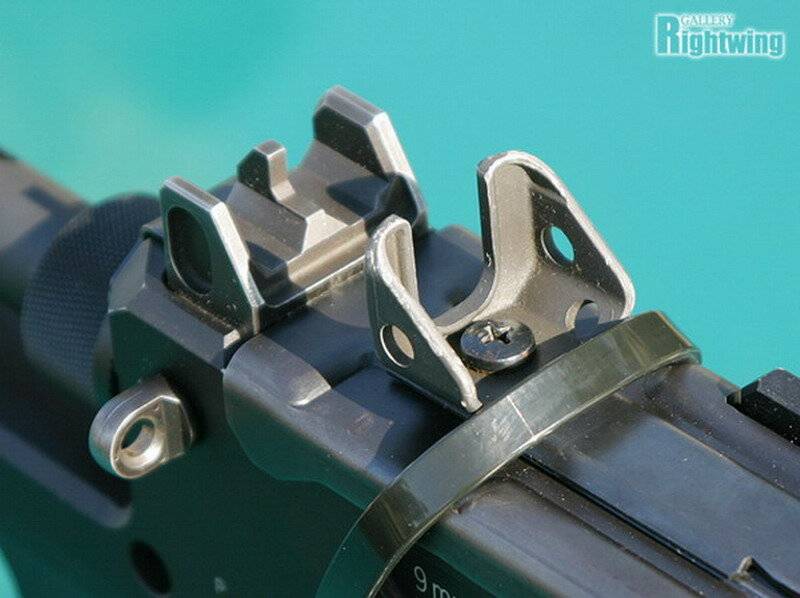 "Front sight" and shutter handle
And it is not surprising that, comparing their previous model and the Israeli Uzi, Japanese engineers transferred many of its characteristic features (in particular, the shape of the Mini Uzi) to their new submachine gun. And so, in fact, the PM-9 was born. It also used the ubiquitous 9x19 mm pistol cartridge, but they made a magazine for it with 25 rounds and not 30. The magazine was inserted into the pistol grip in the same way, but, unlike the Israeli model, the Japanese put a second on their submachine gun the handle, which was carried out almost under the barrel, which facilitated the management of weapons, especially when firing in automatic mode. The sights were on the top panel of the rectangular receiver and had the most common device. 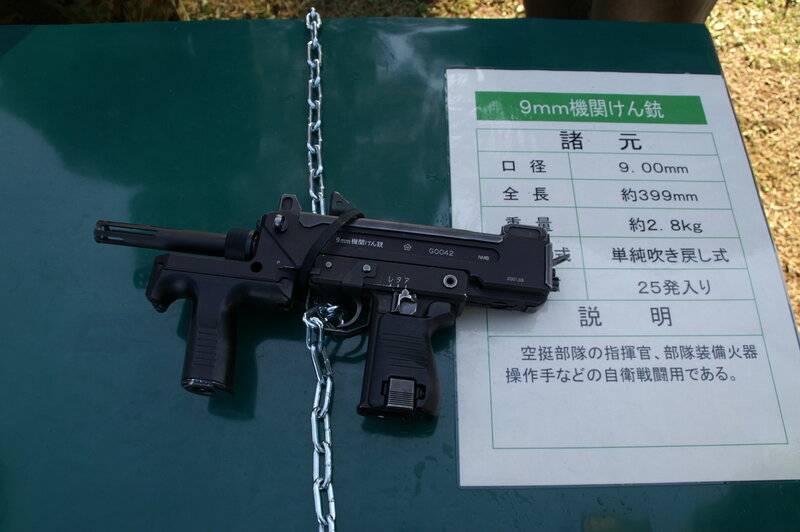 The upgraded sample has lost all its “wood"! 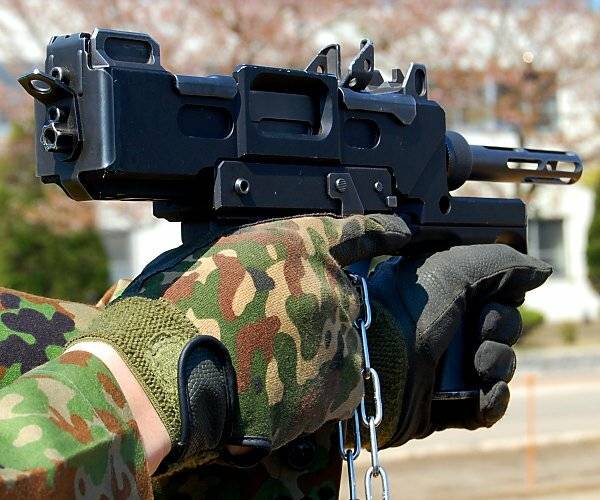 Window view for ejection of spent cartridges
The total weight of the new submachine gun has decreased by half and has now become 2,8 kg with a total length of 399 mm. Barrel length 120 mm. The rate of fire was high - 1100 rounds per minute, but the effective firing range dropped to 100 meters. Bullet speed - 247 m / s. 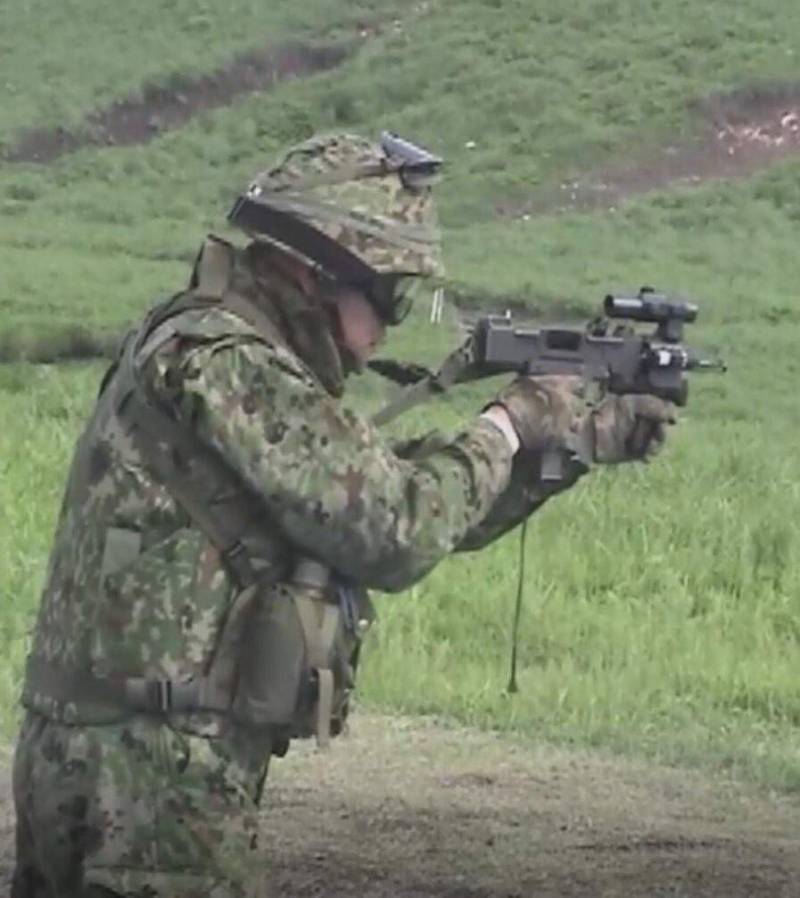 This photo shows quite clearly that a tactical flashlight, a laser target designator, and even an optical sight can be mounted on a submachine gun! 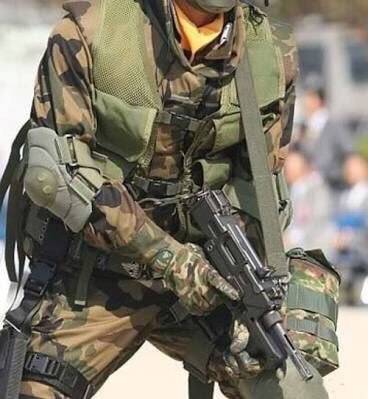 And in general, the soldiers of the Japanese Self-Defense Forces are equipped very cool!
Moreover, here the Japanese turned out to be true to themselves and, for the sake of maximizing the cost of production, they trimmed both handles with wood and only later they were modernized and received plastic handles. 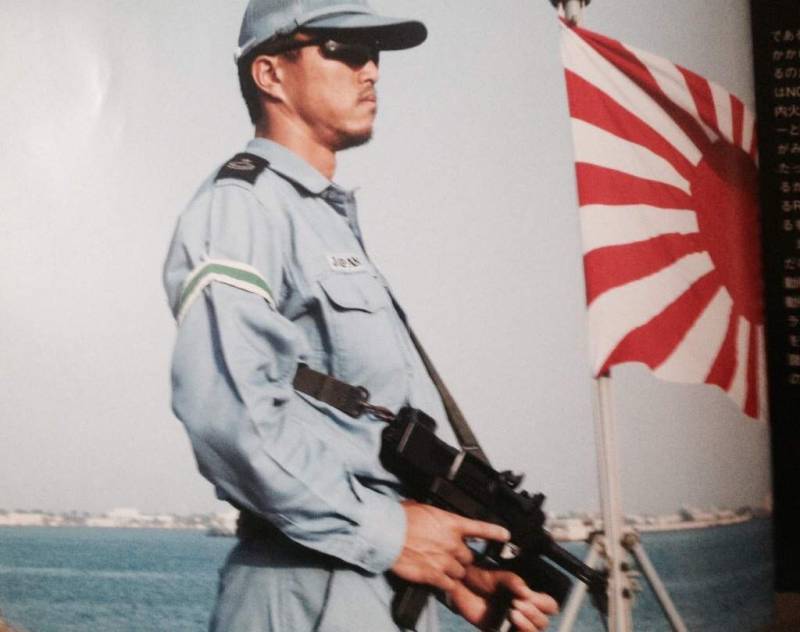 They are armed with sailors ... 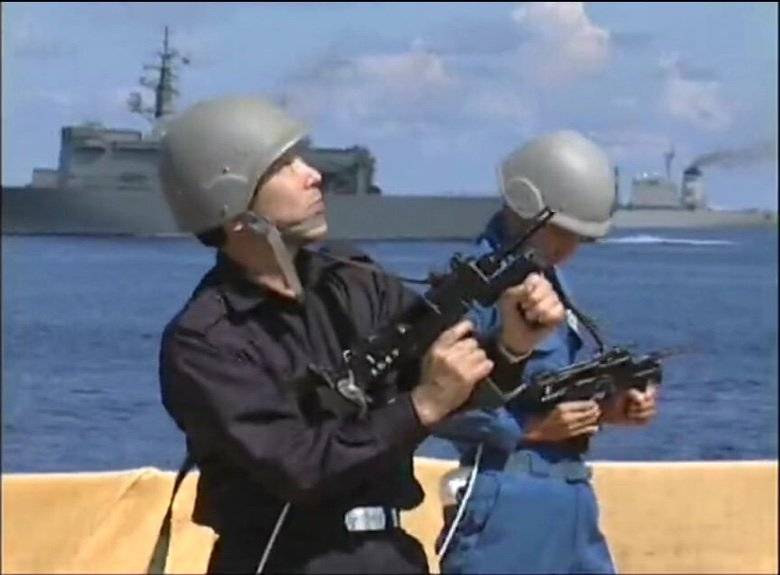 And they constantly train with them ... 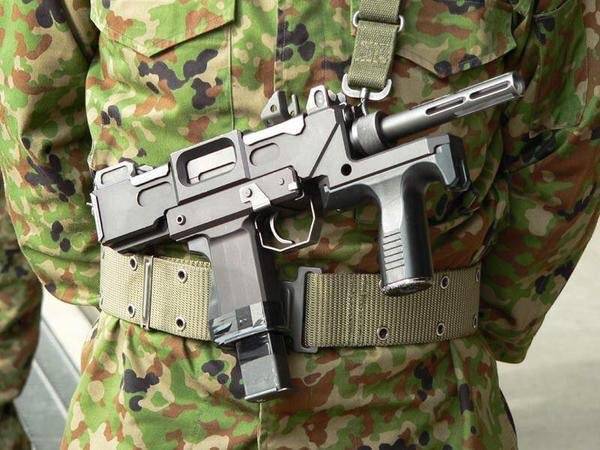 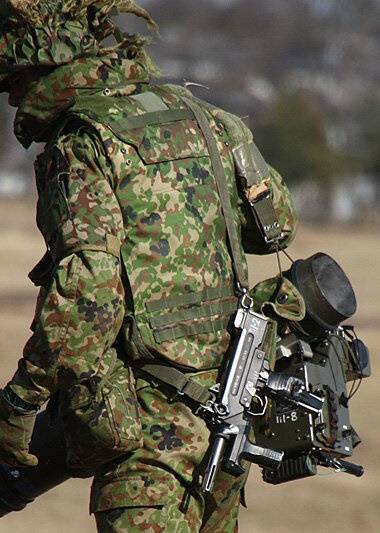 And the back view ... That's how they run with them! 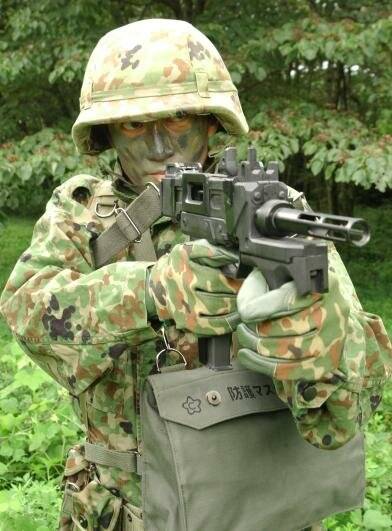 And so they shoot from them, having decorated their physiognomy with camouflage!
The submachine gun was put into service in 1990, and from then until now it continues to carry out limited service in various units of the Japanese Self-Defense Forces. In JSDF, it is referred to as a 9 mm submachine gun (9 mm 銃 拳 銃, Kyumiri Kikan Kenjū), or as M9, and is a product exclusively made in Japan. By analogy with the Israeli "mini-Uzi" PM-9 has a telescopic shutter, but differs from it both in its appearance and operational combat characteristics. In addition to Japan, in accordance with Japanese law, it is no longer shipped anywhere. This is a national weapon! 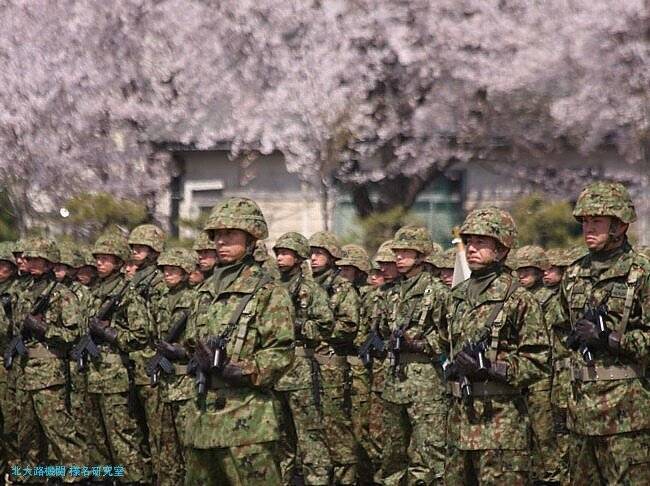 And whole units go out to admire the blossoming sakura!
Although this submachine gun has served in the Japanese military for many years, since 2009, JSDF officials have been considering replacing it. One of the possible examples is the very famous Heckler & Koch MP5. However, 11 years have passed, and the M5 has not yet appeared in Japan!